I’m putting out a special edition of my column this week. As you may know, I usually only post event reviews or local music news etc. every second week, but this week is different! I have been so inundated with a number of talented acts approaching me to write pieces for them that I have had a really difficult time fitting it all in! That’s great though and I’m delighted by it! Anyway, I thought I’d write a special edition of my column to make sure I could fit in as many artists as possible. After all, this is about the music and fostering Kelowna’s music scene!

On to the music! As you will see in my latest upcoming music events list here on Welcome to Kelowna, Stone Iris are going to be playing at O’Flannigan’s on Tuesday, May 15th – that’s this coming Tuesday at 8pm, and I want you to see their show. So who are Stone Iris? Well, in short, they’re a seven-piece funk rock band from Edmonton, Alberta. They’re currently on tour, hence their visit to Kelowna. They’re a band with a background in a very wide range of music from blues to rap to pop, metal, rock and funk, but their sound is polished. I’d say their sound draws upon all of these different influences in one form or another. Their music is high energy and definitely the kind you can bop and dance along to. It should be a night for grooving at O’Flannigan’s. There is something genuine to the sound of Stone Iris, a feeling of real musicianship behind each song and a sense of value behind the lyrics. As of yet, I have not heard them play live (I’ve only heard them online), so I am interested to see the difference a live performance makes to their sound. I’m guessing it’s going to be a fun night.

Also, those of you in the local scene may know Jordan Matchett, perhaps best known, at present, for being the open mic jam night host at O’Flannigan’s. Jordan is a tireless promoter of local music and a talented multi-instrumentalist in his own right. He’ll be opening up for Stone Iris on Tuesday and putting on a show for those in attendance. I’ve seen Jordan play on many, many occasions and I definitely recommend getting to O’Flannigan’s early and checking out his set. 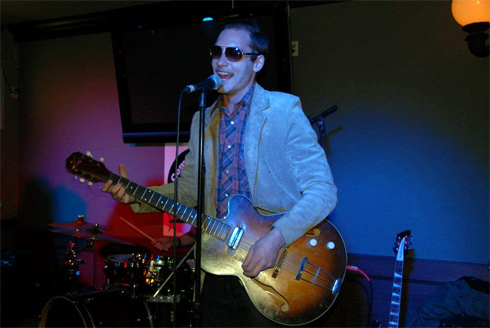 Hopefully I’ll see you on Tuesday!