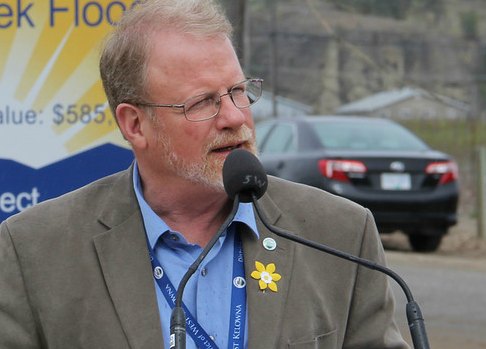 West Kelowna Mayor Doug Findlater along with members of council are stressing the importance of a second bridge crossing at the Union of BC Municipalities convention in Whistler.

They met with Minister of Transportation and Infrastructure Todd Stone about the issue, seeking reassurance that this will be a corridor study, rather than a crossing only study.

“West Kelowna Council believes that this issue is bigger than just where a second bridge should be located,” says Findlater. “We received confirmation from Minister Stone that it is indeed a much broader study than just the crossing, which will look at the traffic patterns of the region and consider a bypass or even a second corridor to help alleviate traffic congestion.”

Members also received good news from Stong about the securing left-turn lanes at key intersections on Highway 97, something the district has been advocating for.

“Minister Stone advised us that the one remaining intersection we are concerned about, Daimler Drive, will have advance left-turn signals installed in 2015,” said Findlater

Mayor Findlater and council was also able to steal a few minutes with Minister of Forests, Lands and Natural Resource Operations Steve Thomson to discuss the new off-road vehicle licensing legislation which deals with both registration and licensing.

The new legislation will be rolled out this fall which Findlater says will help to protect the districts watershed not to mention address residents’ concerns about noise and fire safety.

The new legislation was first announced in February of this year and will require dirt bikes and quads being registered with license plates when used in public places. It will also make it mandatory for drivers to wear helmets.