When a Quebec couple recently travelled to the far reaches of Yukon in a bid to escape the novel coronavirus, only to be turned away, it seemed a textbook case of pandemic-generated panic.

But while it was an extreme example, experts say the daily assault of information about COVID-19 can distort people’s estimation of the risk the virus poses to them, which leads to both good and bad behaviour.

Dana Tizya-Tramm chief of the Vuntut Gwitchin First Nation in Old Crow, Yukon, told The Canadian Press that when the Quebec couple got off the plane March 27, they displayed a “palpable” fear of the pandemic.

He said he told the couple, whom he didn’t identify, that Old Crow couldn’t shelter newcomers who might spread the virus among its 250 residents — and then he sent them packing.

McGill University psychology professor Ross Otto says there is a well-established psychological principle that may explain the couple’s decision to flee to the North. 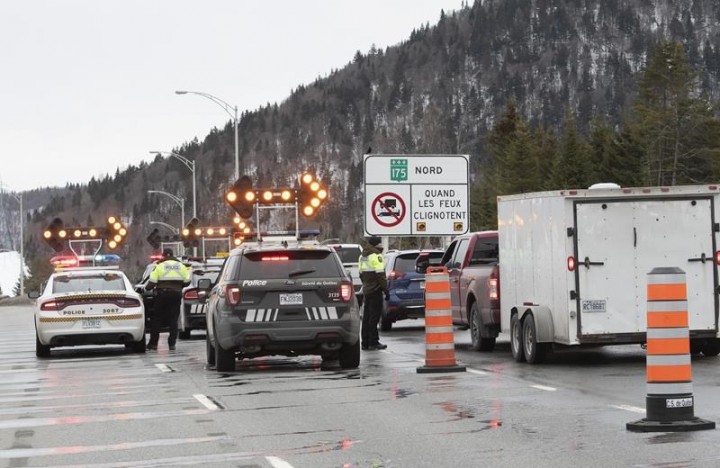 In the early 1970s, psychologists Amos Tversky and Daniel Kahneman posited that humans have trouble estimating the likelihood of something happening to them because they are influenced by examples that come readily to mind.

Today, there is such a deluge of information about COVID-19 infections and deaths that “people are going to overstate or overestimate their own chances of dying of coronavirus-related causes,” Otto suggests.

In some cases, that will spur people to flee to remote areas and put others at risk, to hoard toilet paper or behave in other ethically questionable ways. But, Otto said, that distorted judgment can actually help society by facilitating self-isolating behaviour.

The fear of death prompted by photos of coffins in Italy and stories of doctors having to ration ventilators can make even the most selfish person act in a way that benefits the greater good.

“The more afraid you are of death, the more it behooves you to self-isolate,” he said. And the more people isolate, the less the virus spreads.

“We started to hear more and more about owners from Montreal, of chalets in this area and in Gaspe, who had already come to the regions to isolate themselves from COVID,” Marc Parent, mayor of Rimouski, Que., said in a recent interview. “And we heard of hotels that started receiving travellers from the Montreal area …. It began worrying people.”

So public health officials in the region of eastern Quebec asked the province to block access to their towns and villages, according to Parent.

On March 28, the Quebec government ordered police to set up checkpoints, severely curtailing access to eight remote regions, including the Bas-Saint-Laurent, where Rimouski is located. Last week the province extended the restrictions, banning all non-essential travel to much of cottage country north of Montreal, and to Charlevoix, northeast of Quebec City.

Dr. Natasha Crowcroft, a public health expert at the University of Toronto, said the pandemic might be triggering peoples’ survival instinct, causing them to want to flee from the virus. But, she added, it’s up to authorities to reinforce the message that home is the safest place.

Furthermore, she said, unless someone is already living off the land and is self-sufficient, leaving a city to escape a fast-spreading virus may not be the smartest thing to do.

People who flee urban centres may still be at risk of becoming infected, but with fewer health-care resources to help them, she said: “The idea that fear distorts people’s assessment of risk is a really important one.”

Most of the public health messaging so far has been to urge Canadians to stay home out of civic duty, she noted. A more effective approach, Crowcroft said, would be to appeal to “the idea that people are scared of things they don’t understand, and that home is a familiar place … it’s a safe place to be.”

Back in Old Crow, Tizya-Tramm said the couple, who he estimated were in their late 20s or early 30s, had arrived with neither a place to stay nor proper attire for the weather.

Otto and colleagues at McGill are conducting research on whether people’s cognitive functions are being negatively affected by the virus. He said he wonders whether the panic caused by COVID-19 can cause excessive rumination, or a stress response, which he said is known to throw off higher order cognitive function.

“So the simple question you can ask is: are people just getting dumber right now because they don’t have any bandwidth or capacity to actually do what they need to be doing?” he said.

Mathieu Montaroux, the founder of Quebec Preppers, a website dedicated to helping people prepare for unforeseen events such as flooding and fires, said the right reflex in a time of pandemic is to stay in place “rather than running around left and right.”

His website has seen traffic go from an average of 15,000 hits a month to 41,000 in March. He and his fellow preppers didn’t wait for the government to order people to isolate.

“Myself and others who had properly planned were already limiting our movements and we already had our homes stocked with everything we needed,” he said in a recent interview.

“If people were prepared — and had the right reflexes — they would have done that too.”