'I don’t remember being that tall': Injured Bronco shocked at spinal surgery results

A hockey player paralyzed in the Humboldt Broncos bus crash says he is thrilled with the progress he’s made since receiving spinal surgery in Thailand a month ago.

Doctors implanted an epidural stimulator in Ryan Straschnitzki’s spine and one week later injected stem cells above and below the injury to try to reverse some of the damage.

The 20-year-old has just a week to go before returning home to Airdrie, Alta.

“It’s been progressively getting better and harder at the same time, which is good. They put me through a good sweat, doing a couple of laps around the buildings. It’s good work,” Straschnitzki said in an interview from Bangkok with The Canadian Press. 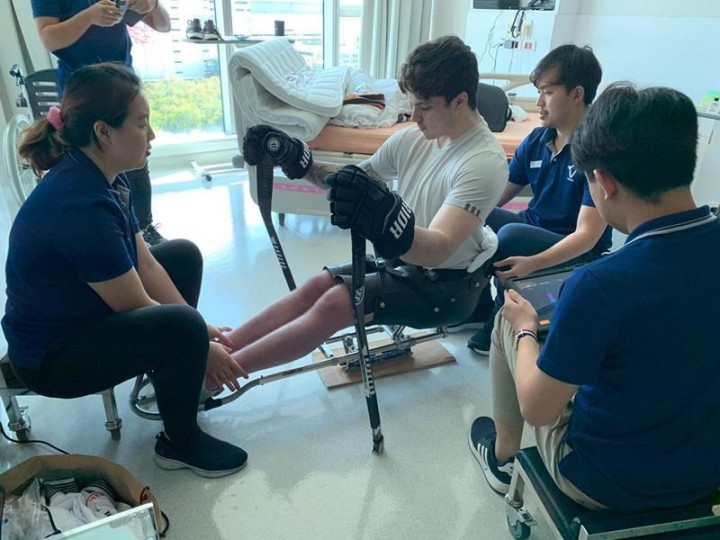 One video of his rehab shows him straightening a leg. In another he is strapped into a harness as physiotherapists slowly help him walk with the use of a wheeled machine.

“I was at a loss for words. I was really shocked and excited at the same time. It kind of scared me a little bit, but again it was pretty excited,” Straschnitzki said.

“I don’t remember being that tall.”

He said he felt all sorts of emotions when he took his first steps since climbing aboard the Broncos hockey bus on April 6, 2018.

“It gave me kind of a shock and brought back obviously a lot of memories … (including) all the sports activities I was involved in.”

Straschnitzki was one of 13 players injured when an inexperienced truck driver blew through a stop sign and into the path of the Saskatchewan junior team’s bus. Sixteen others on the bus would die.

Straschnitzki, who was paralyzed from the chest down, isn’t expecting a cure but hopes the implant will restore some muscle movement.

Tom Straschnitzki, the young man’s father, said the only downside is that his son is enduring spasms after using muscles that haven’t been working for the last 19 months.

“He’s getting pain where he never had before, which is a good thing, but it takes months for it to kick in.”

Straschnitzki said the best part of the journey has been watching his son react to the changes he’s experiencing.

“When he took his first steps on his own and he controlled it … he was pretty revved.”

The surgery can cost up to $100,000 and isn’t covered by public health care or insurance, because the epidural procedure has not been approved by Health Canada. The Straschnitzki family is paying for it, but is angry the treatment isn’t available here.

Health Canada says it has licensed spinal cord stimulators but only for pain relief.

“The department has not licensed a spinal cord stimulator device for regaining motor skills or sensory functions following spinal injuries, nor received an application for this intended use as of yet,” Health Canada spokesman Geoffroy Legault-Thivierge wrote in an email.

Straschnitzki, who is hoping to make the Canadian sledge hockey team and compete in the Olympics, took his sled with him to Thailand and has been sitting in it as part of his rehab.

“It’s supposed to help me with more balance, so when I’m on the ice I’m not falling over as easily.”

He’s finally been cleared to return to the ice in Bangkok later this week.

“I’ve been itching to get out there and I can’t wait.”