It’s the highest level since February 2003.

The 4.4 per cent increase is based on a comparison of the consumer price index in September of this year and September last year.

British Columbia’s September rate was 3.5 per cent, the second-lowest behind Saskatchewan (where it was 3.3 per cent).

Gas prices have led the rise in inflation, with drivers forced to pay 32.8 per cent more in September compared to last year.

Without gas, Statistics Canada said, inflation would have been 3.5 per cent rather than 4.4. 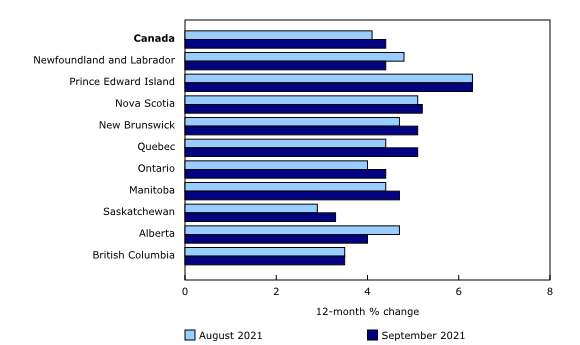 The price rises are being blamed on COVID-19 and the aftermath of economic and personal restrictions implemented by governments around Canada and the world.

The choices would be more severe for those with low or fixed incomes whose earnings have stayed stagnant, she said, meaning their purchasing power is diminished as prices rise faster than wages.

"Their ability to be able to manage their disposable income becomes tighter and tighter, and you’re not foregoing a nice dinner out, but you’re actually forgoing a meal, you’re foregoing prescription medication and necessities like that," Talwar Kapoor said.

September marked the sixth consecutive month that headline inflation has clocked in above the Bank of Canada’s target range of between one− and three−per−cent, something that hasn’t happened since a six−month stretch that ended in March 2003.

CIBC senior economist Royce Mendes said a silver lining is that consumers collectively are sitting on piles of savings that should help them and businesses weather the inflationary storm.

"That’s the only bit of good news that we can say about the inflation this time around is that the economy might be able to handle it a little bit better than it would have in previous decades," he said.

Boosting prices has been global supply−chain bottlenecks that have driven up transport costs, which are being passed on to buyers.

BMO chief economist Douglas Porter said he expects inflation to average 3.3 per cent this year and next because of the broad nature of price pressures, such as for new vehicles or new homes.

"Suffice it to say," he wrote, "that strains the definition of transitory." 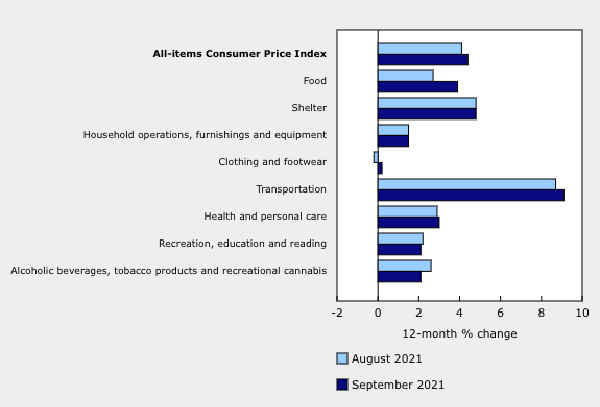 Statistics Canada said the average of the three measures for core inflation, which are considered better gauges of underlying price pressures and closely tracked by the Bank of Canada, was 2.67 per cent for September, up from 2.6 per cent in August. September’s average was the highest since December 2008.

Macklem has said the bank would act if the current bout of price increases looks to become more than one−off pressure points.

Measures it could take include raising the key interest rate or further rollbacks in its stimulus−measure bond purchases. Higher rates would push up interest rates on mortgages, car and business loans, which usually cools consumer demand.

The Bank of Canada is scheduled to make its next interest−rate announcement on Oct. 27.

Macklem has said a rate hike wouldn’t happen until later next year, but there are growing expectations the central bank won’t wait that long, said TD senior economist James Marple.

"Lift off may not come as early as markets are currently pricing, but the risks are certainly moving to sooner rather than later," Marple wrote.

– With files from Canadian Press