‘Is that all for me?’ Girl, 5, who survived triple slaying of family comes home

A five-year-old girl who survived when her paternal grandparents and brother died in a triple slaying in Saskatchewan came home Tuesday to a welcome that astonished and delighted her.

Kendrah was in critical condition when she was rushed to a hospital in Edmonton seven weeks ago. She underwent eight surgeries before returning to Prince Albert.

Her father, Nathaniel Kenneth Carrier, faces three counts of first-degree murder and one of attempted murder.

The young girl smiled and waved as dozens of honking vehicles passed by her home to show support Tuesday. Confetti exploded from one vehicle and another was filled with helium balloons.

“That’s for you baby girl,” her grandfather Corey Ferchoff replied. 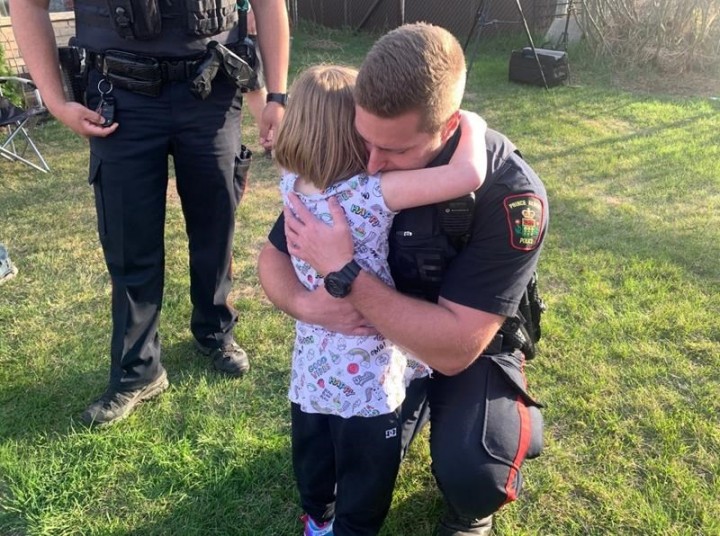 Nathaniel Carrier, 28, was charged less than a week later.

The parade was organized to help celebrate the girl who has become known as “one tough cookie.”

Kendrah’s mother, Heather-Lynn Sumners, expressed her gratitude for the support.

“I am more than grateful for everything,” she said. “I am very overwhelmed and so is Kendrah.”

Sumners acknowledged her son Bentlee’s absence was tough, but added that she felt he was there in spirit.

“It really is a pleasant relief coming home, and being able to relax is more than I can ask for,” she said.

Const. Michael Norrie with the Prince Albert Police Service was one of the first responders when the bodies were discovered. At the parade, he was on the receiving end of a warm hug from Kendrah.

“It’s just an overwhelming feeling. It’s hard to even describe it. It’s just a miracle that she is alive,” he said.

“It was nice that the community put on a big parade for her,” he said. “Seeing her smile and happy makes you feel so good.”

The parade was organized by Ferchoff as well as cousin Lisa Bonik, who had advertised the event on Facebook. She said she was taken aback by the turnout.

“Just driving by watching her was enough,” she said.

Moments after the parade ended, Kendrah climbed down from the table she had been standing on and went back to playing on her swing set.

Carrier remains in custody and is to appear in court June 4.

UPDATE: BC's state of emergency extended for a 5th time