A kilt−wearing Scotsman and his dog completed an 8,000−kilometre fundraising walk across Canada on Sunday by striding into an icy breeze atop Cape Spear on the eastern edge of Newfoundland.

Michael Yellowlees and his Alaskan husky, Luna, started their journey in Tofino nine months ago.

“I’m feeling pretty pumped, but I can’t believe that it’s done," he said as he neared the finish line along the coast, where it was a brisk −2 C. "It will take a couple of days to sink in."

Yellowlees, who is from Dunkeld and Birnam in Scotland, undertook the epic trek to raise money for a conservation group that wants to plant trees in the Scottish Highlands in a bid to revitalize the Caledonian Forest.

The 32−year−old Highlander — who raised more than $60,000 for the Trees for Life charity — wore a kilt every day of the trip, including through snowstorms in the Rockies and the cold rain in Newfoundland. 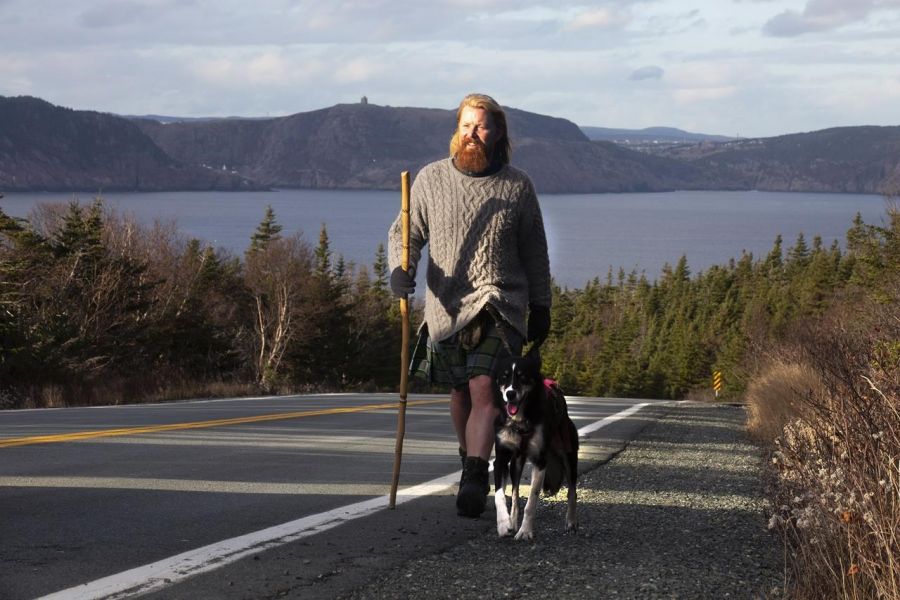 "Once you’re moving and as long as your core is warm with enough layers, you stay warm enough," he said in an earlier interview. "We’ve stuck with it. It’s been the kilt the whole way."

Asked why he chose to walk across Canada, he said he wanted to draw attention to this country’s vast forests, which stand in stark contrast to the largely treeless Highlands.

"It’s quite a barren, sad−looking landscape," he said during a break on Saturday afternoon. "It shouldn’t look like that at all. It used to be forested from coast to coast."

The pine forests were cleared long ago for shipbuilding and to fuel the growth of the British Empire, he said. As well, thousands of Highland Scots emigrated to Canada during the Highland Clearances from 1780 to 1860, when farmers were evicted to make way for sheep.

Some of the descendants of those immigrants still reside in Cape Breton, where Yellowlees was quick to notice the many Gaelic place names.

"The further east I got, the more at home I was feeling," he said. "People were stopping their cars and I would get in, and they would speak Gaelic to me . . . . There’s a shared heritage."

As for his companion Luna, Yellowlees said the former sled dog took the trip in stride.

"They’re bred for distance. The mileage we covered every day is minimal for a dog like Luna. She’s been amazing."

Having worn out four pairs of boots, Yellowlees said he was physically exhausted. He was planning on spending the next two weeks relaxing in St. John’s.

Looking back, Yellowlees said he will always remember the kindness shown by so many strangers.

"People have been absolutely amazing across Canada by coming out and showing their support and bringing food to the roadside," he said. "The hospitality and friendship I’ve been shown has been breathtaking."