A Canadian Armed Forces officer who publicly urged other military members to disobey orders and not help distribute COVID-19 vaccines was reprimanded and fined on Thursday after apologizing for his “public display of disloyalty.”

Officer Cadet Laszlo Kenderesi delivered the apology at the start of an unprecedented court martial, where he was issued a severe reprimand and $4,200 fine after pleading guilty to conduct to the prejudice of good order and discipline.

Military police originally charged Kenderesi with one count of endeavouring to persuade another person to join in a mutiny, for which he faced a maximum of life in prison, but prosecutors withdrew the charge before the start of the court martial.

Kenderesi was also facing a charge of behaving in a scandalous manner unbecoming an officer, but that charge was automatically stayed after presiding military judge Cmdr. Martin Pelletier accepted his guilty plea for prejudicial conduct. 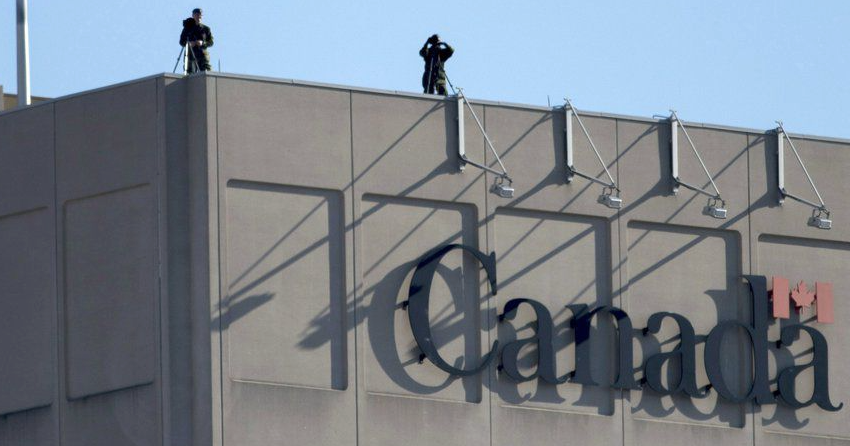 Describing the case as “unique,” Pelletier told Kenderesi during sentencing that he was not being punished for his personal views about vaccines, but for participating in — and publicly expressing his support for — anti-vaccine demonstrations while in uniform.

“It's even more unacceptable for Officer Cadet Kenderesi to incite members of the Canadian Armed Forces to disobey orders … in relation to foreseen tasks of assisting in the distribution of vaccine,” Pelletier said.

Pelletier repeatedly referred to the case’s lack of precedent, which he suggested was a good thing.

“The court and counsel are unaware of any other instance where a Canadian Armed Forces officer attended a demonstration against a high-profile government action in uniform and took a microphone to call upon members of the Canadian Armed Forces to refuse orders to perform lawful duties,” he said.

The case related to a speech at an anti-lockdown rally in Toronto’s Dundas Square on Dec. 5, 2020, in which the 60-year-old cadet instructor appeared in full military uniform and spoke out against what he called “killer” vaccines.

Kenderesi went on to urge other military members to disobey orders to help with the federal government’s vaccination efforts, which were just ramping up at the time as the country struggled with another wave of COVID-19.

“I'm calling upon all military personnel to do the same, not to accept any unjust orders, which would be giving out and distributing vaccines,” Kenderesi told rally participants, according to a transcript read in court.

A video of his comments, in which he acknowledged that he could be punished, was later published online.

The Armed Forces had only days earlier received formal orders to start planning for the distribution of vaccines across the country, as Health Canada entered the final stages of reviewing vaccine candidates from Pfizer and Moderna.

Addressing the court, Kenderesi expressed remorse for his actions as Pelletier prepared to sentence him.

In a separate affidavit read into the record, court heard Kenderesi was born and grew up in Hungary while the country was under the Soviet Union’s influence, and that the COVID-19 lockdowns in 2020 affected him both emotionally and financially.

That included his wife losing her job and the collapse of his trucking business, after which he declared bankruptcy.

Court also heard that while Kenderesi first joined the Canadian Armed Forces in 1978 and served for years as reserve cadet instructor in Borden, he had virtually no contact with the military after 2018.

But even as defence lawyer Maj. Alexandre Gélinas-Proulx sought to use these as mitigating factors, prosecutor Lt.-Cmdr. Jennifer Besner argued that the underlying issue was one of enforcing discipline in the ranks.

“This is necessary because Canadian Forces members must willingly and promptly obey lawful orders that may have very devastating personal consequences.”

Besner and Gélinas-Proulx nonetheless agreed in asking for the severe reprimand and $4,200 fine, adding the officer cadet has already served 80 hours of community service.

While Pelletier ultimately accepted the proposal and acknowledged the emotional and financial stresses that Kenderesi was facing at the time, he underscored the severity of the officer cadet’s actions.

The results of Kenderesi’s case could have repercussions on future courts martial for Armed Forces members who have publicly spoken out against vaccine mandates and other government policies.

That includes Warrant Officer James Topp, the army reservist who was charged earlier this year with two counts of conduct to the prejudice of good order and discipline for speaking out against vaccine requirements while wearing his uniform.

Topp has since become a celebrity of sorts for some Canadians opposed to not only vaccines and pandemic restrictions, but also the federal Liberal government, and is currently in the midst of a cross-country march.