Atlantic Canadians are starting to dig themselves out of their homes today after an epic blizzard dumped a record setting 76.2 cm of snow. 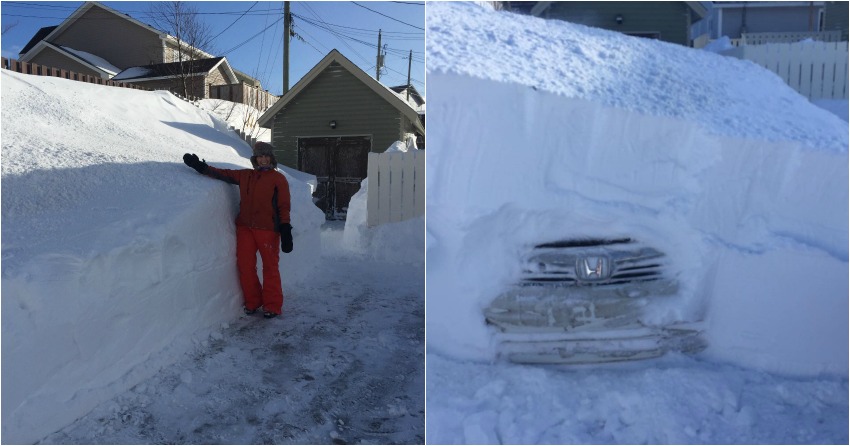 According to the Weather Network, conditions are finally starting to let up in Newfoundland, although a state of emergency remains in place this morning.

Always positive; you have to love Newfoundlanders! #stormageddon2020 pic.twitter.com/Y9EOID4y3X

Not laughing anymore. The snow is piled up so hard against my door the doorbell actually just rang. Okay, I'm laughing a little at that. #BuriedIn #CantGetOut #nlblizzard2020 #PanicTime #TimeToStartDrinking pic.twitter.com/TAPJCTuY2Z

Well, I found a place to keep my @DietCoke cold! All is good! #nlblizzard2020 #stormageddon2020 #nlwx pic.twitter.com/VrdbB3sdNK

People are sharing their photos of what the view from their front doors are, and handing out some tips for shovelling your way out of the house.

Dig out the door I guess #nlwx #stormageddon2020 #snowmaggedon2020 pic.twitter.com/wDFTQXFlDG

Although photos shared on social media of the predicaments Newfoundlanders are facing are showing their positive nature and humour in the situation, things can get dangerous quickly.

The St. John’s Regional Fire Department responded to an avalanche on Friday night that damaged at least one home and resulted in some evacuation.

BREAKING: This avalanche happened in living room of a house in Outer Battery of St. John’s tonight. It’s in that lovely part of the city that flanks the harbour, the one you see in the tourism ads. @CityofStJohns is evacuating the area. @cbcnl @CBCAlerts @CBCNews #nlblizzard2020 pic.twitter.com/UZqnF6a5YG

Reports confirmed! Firefighters at my door in outer battery asking to evacuate us. pic.twitter.com/YuAWJQxG8w

Luckily, no one was injured.

The St. John’s airport is also not operating, and won’t be until Sunday morning local time.

There will be no flight operations until at least 8:30am Jan. 19th. The City remains in a state of emergency. While crews are working to clear the snow, people are advised to not come to the airport. Check with your airline directly for flight updates and rebooking. #nlwx pic.twitter.com/dEkLAt7Xtu

The Weather Network says that although the snow has started to taper off, the impacts will likely be felt for a few more days.