Distracted driving campaigns across B.C. last month revealed the shocking number of people who still choose to use their mobile device behind the wheel.

A new survey shows that, despite well-publicized dangers of distracted driving, 37% of Canadian drivers use a mobile device behind the wheel. 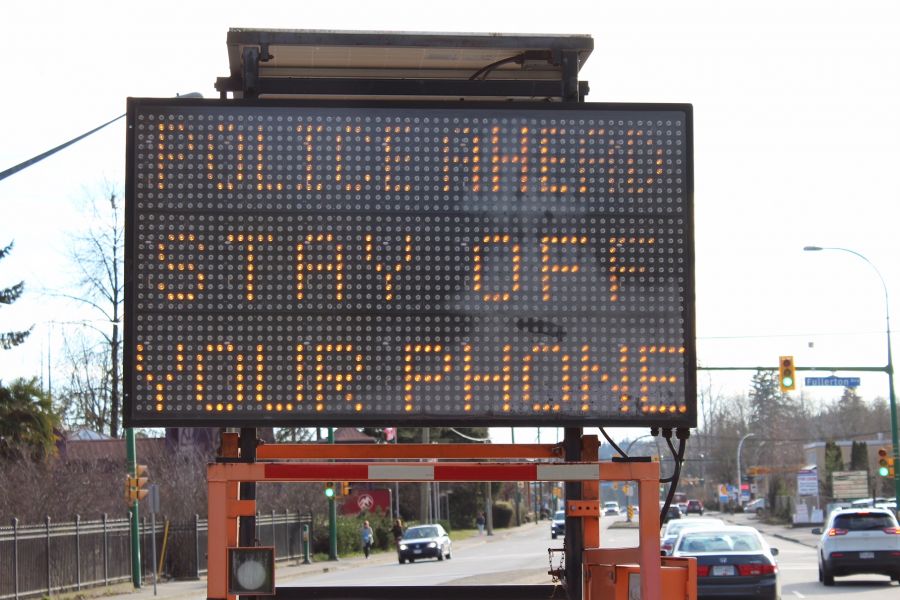 The poll by Travellers Canada revealed that 31% of people feel compelled to use their phone while driving because of family obligations “that require constant attention.” Another 27% did not want to miss something important, and 14% use their phones while driving to always be available for work.

“The findings suggest that drivers are feeling the pressures of our increasingly connected world, and high awareness of the law does not necessarily translate to prudent behaviours behind the wheel,” said Jordan Solway, Group General Counsel and Vice President of Claim at Travelers Canada.

#wvpdtraffic members just issued the same driver two distracted driving/cell phone vt's within 13 minutes of each other as the male drove along Marine Dr from Taylor Way onto Lions Gate bridge. Fortunately only the wallet was hurt, so please #leavethatphonealone

In the South Okanagan, police issued a total of 54 distracted driving tickets over the course of a weekend. RCMP in North Vancouver announced they handed out 74 tickets to distracted drivers, all in just two hours.

You were given a sign, in fact several. Despite advance public notice of #DistractedDriving enforcement with @nvanrcmp & #IRSU on approaches to Lions Gate Bridge this aft we're till finding several drivers not getting the message. #LeaveThePhoneAlone pic.twitter.com/IquqQv3bng

Nearly 300 distracted driving tickets were handed out in the Central Okanagan in March.

Under ICBC's new rules, drivers with two convictions for the use of electronic devices while driving over a three year period will now face added and higher premiums.

They could pay as much as $2,000 in penalties, an increase of $740 over the previous punishment, in addition to their regular car insurance premium.

Starting Mar. 1, drivers with two convictions for using an electronic device while driving within 3 years will pay as much as $2,000 in penalties on top of their insurance premium. #EyesFwdBC https://t.co/Ciu0KAGfBN pic.twitter.com/75TTMC867X