Transport Minister Omar Alghabra says Canada's airport security agency is increasing its staffing, but that a lack of workers is not the main culprit for the unacceptable delays passengers are facing this spring — an assessment the sector disagrees with.

Multiple airports are reporting extremely long lines at airport security and border screening checkpoints while passengers say they are being forced to wait for hours, and sometimes missing their flights.

But Alghabra said Wednesday that can't be the main problem, because the security agency's workforce is at 90 per cent of pre-pandemic levels while "travel volume" sits below 70 per cent.

The head of the Canadian Airports Council disagrees, calling staff levels the No. 1 obstacle. 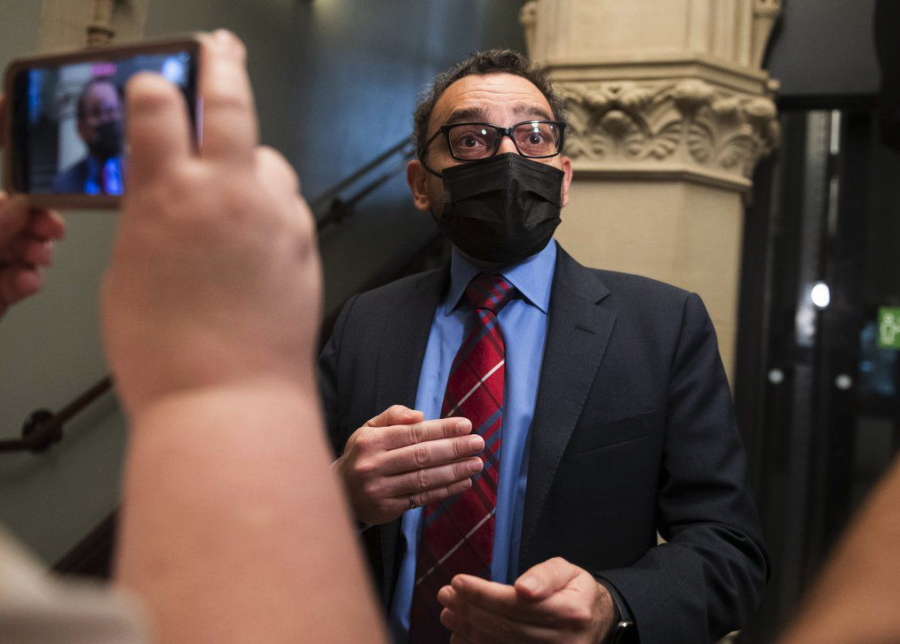 "The challenge here — the main piece — is labour, and being able to staff those peaks and being nimble enough to make it work," Monette Pasher said in a phone interview from Halifax.

Domestic airline seat capacity for May is projected at 85 per cent of 2019 levels, according to council forecasts, and 78 per cent for domestic, US and international overall. The group predicts the latter figure will hit 90 per cent in July.

Industry watchers say more security staff would be helpful to relieve chokepoitns during the coming surge, particularly at the Toronto and Vancouver airports.

Air Canada now flies 14 flights per day between Toronto and Vancouver versus 12 per day in 2019, he said.

"And instead of having a Dreamliner with 200 seats, you've got a 777 with 350 seats," Gradek said. "There are a lot more passengers on those airplanes."

Alghabra said out-of-practice travellers are causing delays at security checkpoints as Canadians shift back into travel mode after spending most of the last two years grounded by COVID-19.

"Taking out the laptops, taking out the fluids — all that adds 10 seconds here, 15 seconds there," he told reporters.

Changing flight schedules have also resulted in waves of large flights leaving and arriving at the same time, causing big bottlenecks at certain times of day, he said.

"They need to adjust for that ... It wasn’t as pronounced as it is right now, the peaks and valleys."

More last-minute bookings by passengers still leery of abrupt public health measures could throw another wrench in the turbine.

"CATSA used to rely on a six-month forecast when it comes to labour allocation. Now they need to rely on a 72-hour, 48-hour volume prediction. They’re adjusting," Alghabra said.

Gradek said more staff — both at security checkpoints and among airlines, which can comb the security queues for passengers with imminent departures and hustle them to the front — would ease the choke points.

Backlogs are especially likely to build in afternoon and evening, when a glut of international trips depart alongside more domestic takeoffs and touchdowns.

Airports have also blamed continued testing of international travellers — Canada's four biggest airports do so at random for fully vaccinated arrivals — which deters many from making the voyage, the sector says.

"To prevent severe passenger congestion, airport and airline staff are forced to hold passengers on planes and deliberately meter the flow of arriving travellers into the customs hall for processing by CBSA (Canada Border Services Agency), a process that we know and appreciate is incredibly frustrating for passengers," the Greater Toronto Airport Authority said last week.

CATSA has also pointed to the peak-and-valley problem, saying that before the pandemic passenger crests were staggered between domestic, US and international flights, causing fewer airport clogs.

"As air travel recovers we are observing simultaneous peaks, which can result in passengers flooding more than one security checkpoint at a time, making the redistribution of resources to address these passenger volumes more challenging," the agency said last week.

CEO Mike Saunders stressed that staffing was a key reason behind the irksome delays.

"While the corporation's third-party security contractors — who are responsible for providing the screening officer workforce — have been working to increase staffing levels, they are not immune to the recruitment challenges experienced by the broader commercial aviation industry and, indeed, many industries across Canada at this time," he said in a statement.

At the height of the pandemic, Vancouver International Airport saw about 2,500 passengers per day, said spokeswoman Megan Batchelor. This month it's averaging 48,000 passengers a day, reaching 51,000 some days.