Police are searching for at least seven suspects who they say descended on an apartment complex west of Toronto on Saturday evening, firing indiscriminately and killing a teen described as an innocent bystander.

Investigators believe the intended targets were a group of people preparing to film a rap video outside the building in Mississauga, Ont., but the "ambush−type" attack claimed the life of a 17−year−old boy who happened to be in the wrong place at the wrong time, said Peel Regional Police Chief Chris McCord.

Police have not publicly named the deceased, but the a spokeswoman for the Peel District School Board said he was a Grade 12 student at Lincoln M. Alexander Secondary School in Mississauga.

Five others were wounded in the incident — a 13−year−old girl, a 16−year−old boy, two 17−year boys and a woman in her 50s. One has been released from hospital and the woman’s once−dire condition has improved, McCord said.

"The attackers had complete disregard for public safety within our community," McCord told reporters on Sunday.

McCord said suspects fired rounds from semi−automatic handguns at around 6:20 p.m. before fleeing the scene. They had been dressed in dark clothing, and some were hiding their faces with balaclavas.

He said more than 100 shell casings have been recovered from the area so far, but officers are continuing to comb the scene.

Another music video filmed at the location last week is believed to have motivated the attack, he said, adding that "information within that rap video that is challenging other people within the community."

He said the attack brought chaos to an otherwise beautiful late−summer evening, when families were out and about making purchases from an ice cream truck. 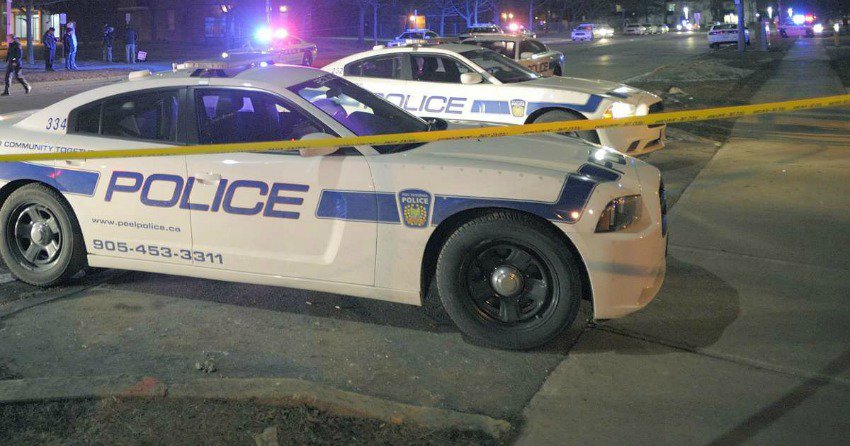 Mississauga Mayor Bonnie Crombie said the incident was "a senseless act of gun violence," that’s prompting her to request more funding from the province to fight back against guns and gangs.

"We are victims ourselves today of senseless tragedy and senseless violence and I think we need additional funding to combat that as well as dealing with the issue of illegal guns and getting them off the streets and including semi−automatic weapons and getting them out of the hands of the wrong people," Crombie said.

The federal government has earmarked $54 million for Ontario over three years to combat illegal gun and gang activity, with the funds earmarked for specialized prosecutors, policing projects and intelligence−gathering efforts in jails.

The province has said it will use the cash to expand a dedicated team of firearms bail prosecutors in Peel Region and to establish a guns and gangs fund for policing projects in the Greater Toronto Area and the Greater Golden Horseshoe region, which stretches from the Niagara Region to the Durham Region.

Prime Minister Justin Trudeau, currently campaigning for re−election, said he would speak later Sunday with Crombie about the shooting.

At the scene of the shooting, residents were still reeling on Sunday.

Marjorie Judhan, 73, who lives in the apartment complex, said she initially thought the gunshots were fire crackers, but moved away from the living room after she heard more shots ring out.

She said she was so shaken by the incident that she couldn’t bring herself to follow her Sunday morning routine.

Mon
14℃
Make Homepage Advertise with Us

UPDATE: Magnitude-6.5 earthquake in Idaho felt throughout the BC Interior