Transport Minister Omar Alghabra is assuring Canadians there’s no reason to fear food shortages will result from a minority of truck drivers refusing to comply with a vaccine mandate in order to cross the Canada−US border.

In an interview, Alghabra said the large grocery store chains and other retailers have assured him they have plenty of goods to provide their customers, despite some labour shortages and supply chain bottlenecks caused by the COVID−19 pandemic.

Moreover, he said there’s been no "measurable impact" on the number of trucks crossing the border since the vaccine mandate went into effect on Jan. 15.

Alghabra acknowledged that pandemic−induced supply chain disruptions and the role truckers play in ensuring the smooth flow of goods into the country are serious issues deserving of "rational and meaningful" debate and "even criticism" of government policy.

But he called out critics, including Conservative politicians, saying they're exaggerating and embellishing the problems, spreading fear among Canadians already stressed by almost two years of coping with the global health crisis. 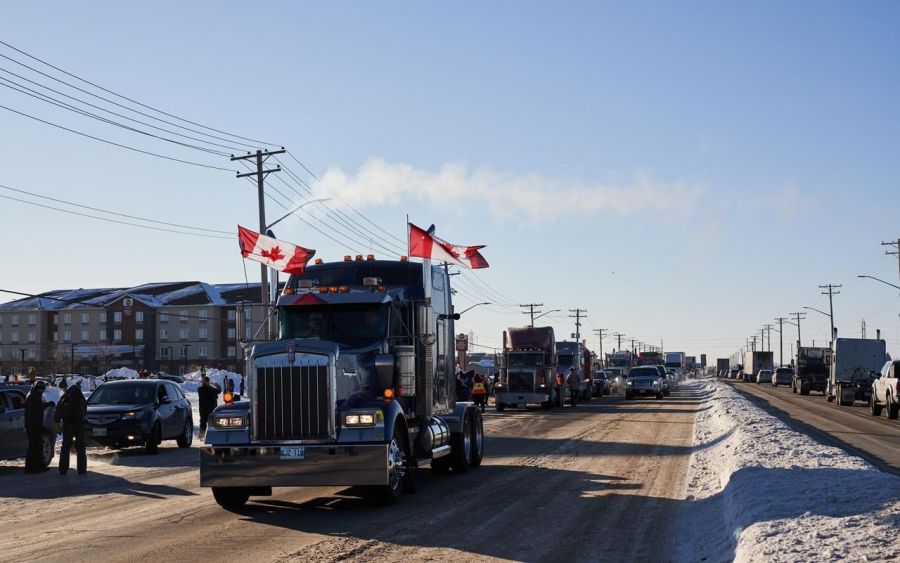 "I don’t want to minimize the fact that we have to remain vigilant and work together to address these issues (of supply chain disruptions)," Alghabra told The Canadian Press, adding he plans to hold a summit on the issue with retailers on Monday.

"But this notion that we’re going to starve is really unfortunate and does disservice to Canadians, to Canadian society and to the debate that we need to be having."

A convoy of truckers and others opposed to public health restrictions is on its way from British Columbia to Parliament Hill for a weekend "freedom rally" against mandatory vaccinations.

Some supporters of the convoy, including some Conservative MPs, have taken to social media to warn the vaccine mandate for truckers will leave store shelves empty. Some have gone so far as to predict Canadians will starve.

Alghabra said he is "concerned about the small number of far−right, vocal opposition that is polluting much of our political debate."

The Canadian Trucking Alliance has estimated that about 15 per cent of truckers — as many as 16,000 — are not fully vaccinated against COVID−19. It has strongly denounced any protests on public roadways, highways, and bridges and has urged all truckers to get inoculated.

Alghabra said the federal government deliberately gave truckers more time to get vaccinated when it imposed an immunization requirement last fall on workers in the air, rail and marine transportation sectors. In consultation with the trucking and retail industries, he said the government waited for a "critical mass" of truckers to get their shots before making it mandatory.

Last week, Alghaba said he met personally with representatives of large grocery chains and feedback from them and other retailers assured him the truckers’ vaccine mandate has had no measurable impact on their ability to stock their shelves.

Indeed, he said: "They are offended and hurt by this perception that people are trying to create that they are not able to deliver for their customers."

"This is what they told me firsthand."

The head of one of Canada’s largest grocery chains supported that contention Tuesday, saying the vaccine mandate on truckers has not impacted the shipment of goods. Rather, Metro president and CEO Eric La Flèche said the biggest problem has been absenteeism, with workers throughout the supply chain falling sick with COVID−19 or having to self−isolate.

While Metro stores have not been able to stock the same variety of products as a result, La Fleche said "there is still food on the shelves."

Alghabra said he’s also been monitoring the volume of trucks crossing the border each day since Jan. 15 and has seen no measurable reduction in the number of trucks. Last week, he said almost 100,000 trucks crossed the border — about the same as usual for this time of year, despite a big snowstorm that hit central Canada and the US and one of those days being an American holiday (Martin Luther King Jr. Day on Jan. 17).

Alghabra took particular aim at Conservative MPs, some of whom have offered full−throated support for the truck convoy and freedom from what one has dubbed the "vaccine vendetta." Some Conservatives have posted pictures of empty grocery store shelves, at least one of which turned out to be a stock photo of a British store.

"It’s irresponsible for anybody to spread fear ... for political gains," Alghabra said.

"There’s room for meaningful discussions and disagreeing on how to do things but exaggerating reality for political gains is harmful and it’s going to create anxieties for Canadians who are already dealing with a lot."

A day after refusing to say whether he supported the truck convoy heading to Ottawa, Conservative Leader Erin O’Toole appeared in a Facebook live event Tuesday evening to say he understands why many truckers, especially independent ones, are upset.

"You can understand why there’s some frustration and why people are protesting," O’Toole said.

He argued that Prime Minister Justin Trudeau is more focused on dividing people with his policies, putting the country’s supply chain under greater strain when he could simply allow unvaccinated truckers to use rapid tests.

"I want to say this: In Canada, people have a right to peacefully protest, people want to work and are worried, people are tired after two years of a pandemic," O’Toole said.

On Monday — even as some of his MPs, including predecessor Andrew Scheer, praised the convoy for defending freedom and liberty — a circumspect O’Toole argued it wasn’t up him as leader of the official Opposition to meet with protesters on Parliament Hill.

The Canadian Chamber of Commerce has urged the government to give truckers more time to get vaccinated while the Canadian Manufacturing Coalition has called for the vaccine mandate to be scrapped entirely.

"It won’t really make a difference. The US has a mandate," he said.

The best way to end supply chain disruptions is to end the pandemic and the best way to do that is to get vaccinated, which is what the vaccine mandate is all about, he argued.