There are many threats currently facing humanity, from global warming and terrorism to food shortages and losing oneself in the virtual world of memes.

However, among all the threats, Canadians should be able to sleep well at night knowing that they were recently rated the eighth safest country in the world by the 2017 Global Peace Index. 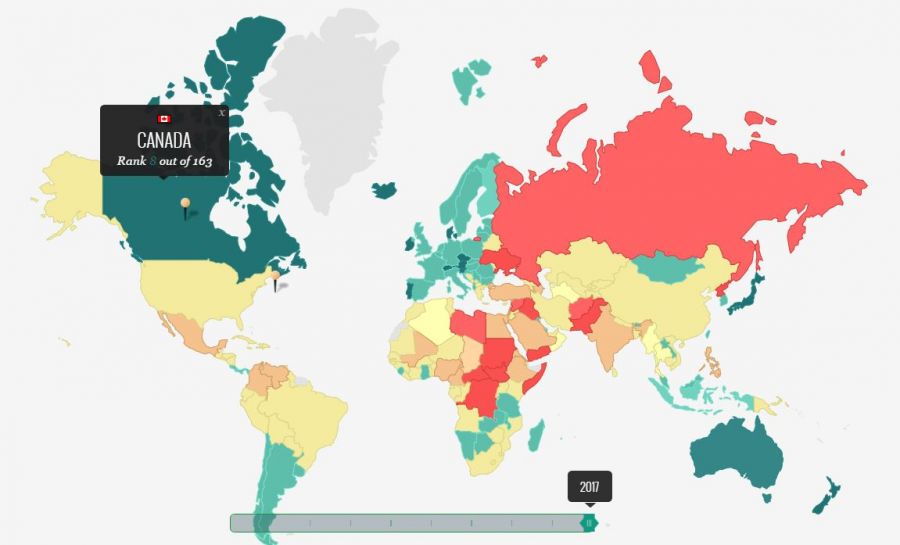 Published by the Institute for Economics and Peace, The 2017 Global Peace Index uses 23 factors to rank countries based on how peaceful they are. Some of these factors include homicide rates, violent crimes, the impact of terrorism and deaths from internal conflicts.

Despite Canada doing well to maintain its spot in the top ten, the overall score for North America deteriorated entirely as a result of the United States.

Indeed, the largest regional deteriorations in the score occurred in North America, followed by sub-Saharan Africa and the Middle East and North Africa (MENA).

The United State’s score dropped largely because of a deterioration in several indicators: the homicide rate, level of perceived criminality in society and the intensity of organised internal conflict. The U.S. also experienced the fourth largest drop in Positive Peace globally, after Syria, Greece and Hungry in the ten years to 2015.

Currently, Iceland remains the most peaceful country in the world, a position it has held since 2008. Iceland is followed at the top of the index by New Zealand, Portugal, Austria, and Denmark, all of which were ranked highly in the 2016 GPI.

Here are some other key findings from the latest report:

Overall, considering the state of the world today, to place eighth out of the 163 countries ranked is a massive achievement.