On Tuesday, the Merritt RCMP received a tip shortly after 8:30 am that a wanted youth had been seen in the downtown area of Merritt.

Police say the youth had been the subject of many recent police investigations.

When officers swarmed the area and located the youth on his BMX bike, they attempted to stop him but he allegedly fled the scene.

The police began to chase him before he was eventually arrested by an officer on foot near Nicola Avenue and Voght Street.

The police investigations have been forwarded to Crown prosecutors and the youth has now been charged with 30 criminal counts, including break and enter, theft of a motor vehicle, mischief, obstructing a police officer, possession of stolen property, possession of a prohibited weapon and breach of bail.

This was one of the highlights of the Merritt RCMP’s weekly report.

Another incident that was mentioned involved the discovery of guns and ammunition in a residence on June 30.

Shortly after noon, officers responded to a call from a concerned citizen about the weapons that were allegedly found in an apartment in Merritt.

A search warrant was obtained and executed. During the search officers found several firearms, prohibited firearms, ammunition, a knife and brass knuckles.

A man was arrested at the scene and later released on an undertaking.

He is set to appear in court on September 6. 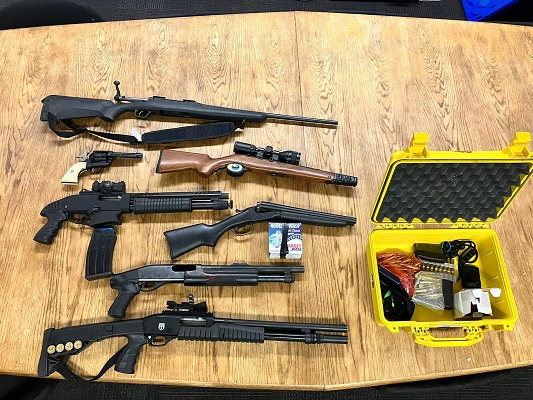