To celebrate Canada’s 150th anniversary, we are shining a light on our amazing country. In the weeks leading up to July 1st, we will be releasing articles on the best Canada has to offer. Get ready for some useful information, beautiful photos and, of course, some laughs.

As Canadians, we take a lot of pride in what belongs to us. Whether it’s claiming the beaver as our national animal or producing the best hockey players in the world, we are proud of our country’s claims to fame. It separates us from America and lets us brag about just how great Canada is.

And, if there is one thing we all have in common, it’s our love for Canada’s food and beverages. We do thank America for its delicious wonders of the world, but we’d like to take the time to appreciate some of the items Canada simply rocks at. Here are our top 15 Canadian food and drinks.

Maple syrup is the perfect favor for an October wedding!!

Maple syrup is one of Canada’s biggest food identities. How did we get such a rep for being the maple syrup loving Canadians that we are? Maybe because it’s delicious, but more realistically because Quebec is responsible for 75% of the world’s output of maple syrup. And, we are proud of it!

Poutine is Life 👊🏽 ! #Smokesroadshow. Visit us at Ribfest #Kelowna!

Runner up to maple syrup, poutine is Canada’s second most famous dish. Originating in Quebec, the French-Canadians discovered the incredible mixture of french fries, cheese curds and brilliantly topped it with gravy.

Although most major chip companies are American, Canadians got on board and adopted these beloved brands. Lays and Old Dutch chips are found in almost every grocery store, but if there’s one thing Canada can claim as our own, it’s that we host a few incredible flavours that are not found below the border. Ketchup and All Dressed chips are typically among most Canadian’s top chip flavours, and being without them is a true misfortune. 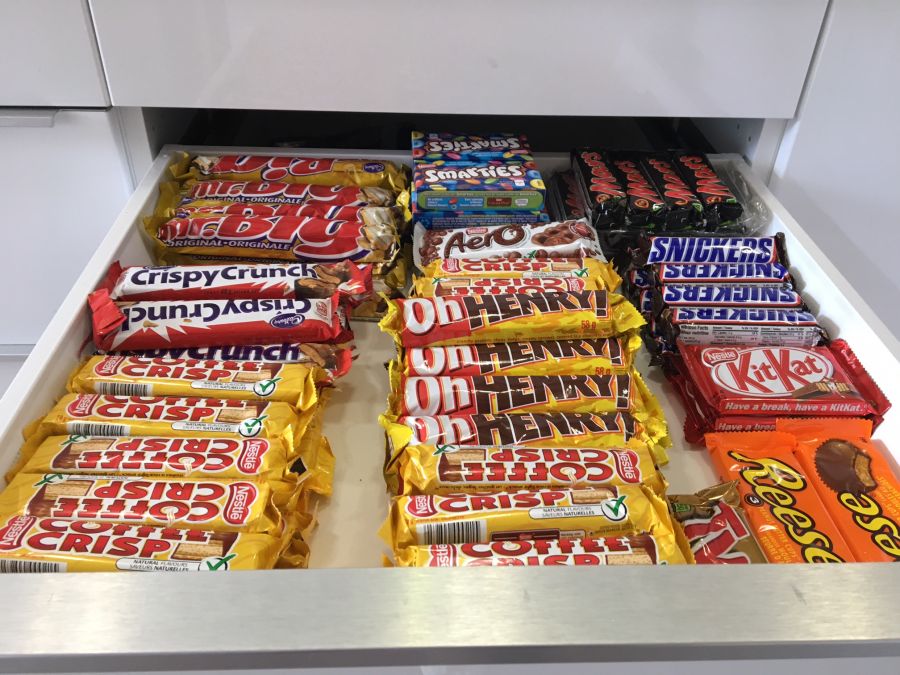 When reaching in our chocolate drawer here at KelownaNow, we see our everyday favourites; Smarties, Coffee Crisps, Oh Henry you name it, but once crossing the border we are shocked to find that we no longer have access to our delicious go-tos. A few that are only offered in Canada are Coffee Crisp, Aero, Caramilk, Mr. Big, Eat-More, Smarties and the list goes on. Can you even imagine a life without these candy drawer staples? Canada, pat yourself on the back, we are doing something right with our chocolate.

The classic "we'll take one of everything" order. #BeaverTails (📷 @ron.ginus)

No, we don’t literally mean a beaver’s tail. We mean the delicious fried dough pastry that merely resembles the look of the beaver tail. For over 35 years, BeaverTails have been providing Canadians with deep fried dough topped with hazelnut spread, Reese’s Pieces, Peanut Butter, classic cinnamon and more. Created in Ottawa by a husband-wife team, BeaverTails are commonly found in Eastern Canada, but locations close to Kelowna are found in Whistler, Victoria, Grouse Mountain and the PNE Playground. If you haven’t tried one before, it’s a must have!

Bannock is a traditional First Nation’s flat, quick bread. Some say it originated from a Scottish source, while others associate it as North American, regardless we’re going to claim it as a delicious treat that many Canadians love. From treats to breakfast, lunch and dinner, bannock can be served in many ways. Try it for yourself in West Kelowna at KeKuli Cafe.

So much happiness all in one "square" made Nanaimo bars as a thank you to a friend today! They turned out great! #nanaimobar #dessert #somuchbutter #yegfood #homemade

If you are a native to British Columbia, there is a high probability that you love nanaimo bars. A dessert produced in B.C. named after it’s place of origin, Nanaimo Bars are the perfect mixture of custard, chocolate, coconut and crumbs.

Known to us as back bacon, Canadian bacon is bacon in the form of sliced ham, grilled to perfection. With all the right flavours and half the grease, back bacon is a Canadian favourite that has made its way into restaurants all over North America.

#sunday#funday at Sammy Js. Get yer #drink on. All #caesars on special on sundays. Come on down and visit your #favourite #bartender. All locations. #icecoldbeer also available of course. 4.99 #pints

Known as an epic hangover cure, the Caesar has been proudly helping Canadians recover from the night before since 1969. It’s also a great drink for any time of the day. It includes vodka, tomato juice, hot sauce and Worcestershire sauce, in a salty glass topped with celery and beans. The Caesar was invented in Calgary to celebrate the opening of a new Italian restaurant, people loved it so much that it became widely known throughout the country.

K.D. is proudly Canadian. This household staple was created by James Lewis Kraft of Fort Erie, Ontario. Kraft didn’t invent pasta or processed cheese, but he did have the brilliant mind to combine the two together. Widely known as a “Made in Canada” product, most of us are guilty of love for this snack, but we sure are thankful that it’s found in almost every grocery store for under $2.

Put it all on hold with Canada Dry.

Known for its incredible tasting ginger ale, Canada Dry obviously originated in Canada, but is now produced in many countries. Created by Ontario native John J. McLaughlin, Canada Dry is typically our go-to drink when feeling sick, or to enjoy on a hot summer’s day. Not to mention the delicious addition of cranberry gingerale.

Everyone could use some extra love! Find yours at www.redrosetea.com. #bonuspack #sharethelove

For you tea drinkers, Red Rose Tea is an easy go-to. This delicious bevvy was established in Canada in 1894, in Saint John New Brunswick. Delivering a delicious orange pekoe taste, Red Rose is a Canadian original that we can easily find.

Known in many coffee shops in B.C., the London Fog is a delicious alternative to coffee that originated in Vancouver, but the creator remains unknown. A London Fog is made up of earl grey tea and a latte mix. It really is the perfect comfort drink on a wet day in the lower mainland.

Montreal smoked meat is a combination of deli meat, salting and curing beef brisket with spices to create a delicious meal topped on bread. Although its origins are unknown, we’re going to take this one, after all, it is called Montreal smoked meat.

Finally, our last item on the list, butter tarts. When was the last time you went to a family event and didn’t have butter tarts? This pastry is a common Canadian dessert, that is one of the few recipes of genuine Canadian origin. A mixture of butter, sugar, syrup and egg, filled into a flaky pastry, this dessert is proudly Canadian and also famously delicious.

We couldn’t name them all, but we could name a few proudly Canadian foods and drinks. At least every province in our country has an item that they can claim as their own, like B.C.’s incredible fruits, Alberta’s hearty beef, Saskatchewan’s jams, jellies and production of mustard, and Nova Scotia’s lobster. In Canada, we are proud to provide some of the best food and drinks in the world!

Share your favourite Canadian originals with us in the comments below!

In celebration of Canada's 150th birthday, Okanagan Spirits Craft Distillery has a Canadiana Gift Basket up for grabs for one lucky winner (19+). Enter the form below before June 30th, 2017 at noon for your chance to win the following:

Fill out my online form.

Sat
22℃
Make Homepage Advertise with Us

Another massive 'freedom rally' was held in Kelowna on Saturday

RCMP searching for diver who went missing in Okanagan Lake