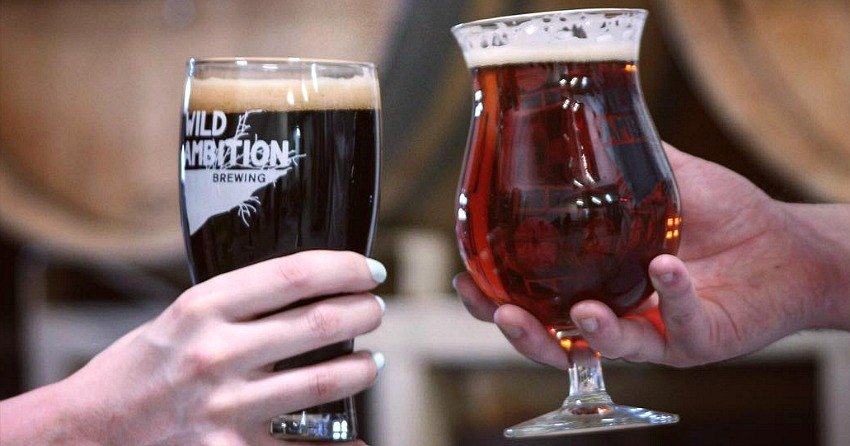 Its doors will open for the first time on Saturday, Dec. 8 with three beers just waiting to be tried by Kelowna beer lovers.

All three are creations of Mitchell Kehoe and Theresa Cashen, the minds behind Wild Ambition Brewing, who are thrilled to finally be welcoming the public into their space this weekend.

As our doors are getting closer to being open, we thought it was time to introduce our little team. First up, say hello to Theresa. She is co-owner of Wild Ambition Brewing, and in charge of more things than her partner will admit. 😉 Stay tuned as the brewery will open soon and a lot of interesting beers will be flowing in our taproom, as well as being available around the Okanagan.

Our 2nd ‘Meet the Team’ post is for Mitchell. He is the other half of our dynamic duo of owners. Mitchell is our brewer, and has been tasked with making each beer 37% more wild and at least 24% more ambitious than the last. Watch for our tasting room / bottle shop to open soon so you can finally enjoy some of our tasty and interesting beers. We can’t wait!

“We are super excited to be opening this brewery focusing on sour and wild creations in the middle of a gorgeous valley filled with winemakers, orchards, and vineyards,” they told KelownaNow.

Wild Ambition’s brewing process will more closely resemble a winery than a brewery, as sours share a lot more in common with cider or wine when it comes to flavour.

With access to winery equipment suppliers, freshly emptied wine barrels, amazing fruit and more, Kehoe and Cashen say they’ll be brewing in a way that would be hard to replicate anywhere else in Canada.

“Our beers are 100% mixed-fermentation, which means we use wild and domesticated yeast and bacteria instead of a single strain of isolated brewer’s yeast,” they explained. “We naturally carbonate our beer in bottles in the style of traditional belgian farmhouse ales.”

“Not all of our beers are sour but they all contain brettanomyces, a less often used ‘wilder’ yeast. We think ‘brett’ adds a lot of complexity and results in a beer that doesn't go stale, but instead drives amazing flavour development as the beer ages.”

Allow us to introduce the first of three beers that will be released this Saturday at noon! Available in 500ml bottles or as part of a tasting flight! Imaginal Phase - Rye Saison With a seasonally appropriate warm and rustic rye flavour, this is our ode to traditional belgian style farmhouse brewing. Based on a classic saison, our twist is that we dose the beer with brettanomyces yeast strains on bottling day. This beer then undergoes a metamorphosis with the new yeast protecting the existing hop flavours while it adds its own wild and rustic expression over time. A reference to the final stage of metamorphosis in butterflies, the name “Imaginal Phase” suits this natural, evolving beer perfectly. With a grain bill of malted barley, lots of unmalted rye and a touch of unmalted oats it has plenty of body despite finishing very dry. We kettle-hopped generously with Styrian Goldings and lightly dry-hopped with a carefully selected blend of Czech Saaz, German Tettnanger, and New Zealand Motueka. This combination brings out the best of the spicy and herbal flavours of old world hops. Brewed, Hand-Bottled and 100% naturally carbonated to proper saison-level effervescence right here in Kelowna! #Kelowna #bccraftbeer #craftbeer #buylocal #brewlocal #drinklocal #milkthefunk #comingsoon

A post shared by Wild Ambition Brewing (@wildambitionbrewing) on Dec 4, 2018 at 4:00pm PST

It’s currently just licensed as a brewery retail store with a sampling endorsement, which means you’ll be able to drink one tasting flight at the brewery and buy more to take home.

Kehoe and Cashen say they may look at expanding their license to include a lounge in the future, allowing them to add pour full pints and food service to their offerings.

“Right now we are focused on our bottle program, but we plan to offer up to six draught taps in our tasting room in the near future,” the co-owners explained. “That being said, we will still be offering bottle poured tasting flights until then.”

Saturday may just be the beginning of Wild Ambition Brewing’s time in Kelowna, but it’s certainly not the start of the journey for its owners.

Come and see us this Saturday as we open our doors for the first time from 12-8pm. We will be pouring our first beers and hope to see everyone out to our opening! #kelowna #kelownabc #brewery #bcbrewery #craftbeer #beer #bccraftbreweries

A post shared by Wild Ambition Brewing (@wildambitionbrewing) on Dec 3, 2018 at 1:26pm PST

Kehoe and Cashen moved to Kelowna in 2017 with a dream and goal of opening their own brewery.

They met at the University of King’s College in Halifax, where Kehoe was studying in the History of Science and Technology program.

While most college kids like beer, his interest went a little deeper than that to the point where he was brewing it as a hobby, and it seemed to rub off on Cashen.

“I didn’t think I liked beer until I tried Mitchell’s,” Cashen said. “A few years into our relationship, it was obvious that Mitchell’s passion had developed beyond that of a hobbyist.”

“I watched as he sought to educate himself on every aspect of the brewing process - both historical and modern. As this was happening, I also gained interest - especially in sour beers!”

According to Kehoe, brewing is far from the only thing he’s dabbled in from a ‘hobbyist’ point of view, but it's the one that made most sense as a long-term career.

“In many ways brewing, with its intersection of art, science, history, engineering and the culinary arts, allows me to apply all of my varied professional, academic and hobbyist interests and influences at once,” he explained.

With all that in mind, Kehoe and Cashen decided to move from Halifax to Kelowna to open Wild Ambition Brewing, which was a return to the Okanagan for Cashen.

Although she was born in Ontario, she spent many of her childhood summers in Oyama and moved to the Okanagan permanently with her family in 2003.

She attended Peter Greer Elementary School, École KLO Middle School and Kelowna Secondary School before leaving the Okanagan in 2011, but she knew she’d be back.

“I felt that some form of entrepreneurship was in my future and I knew I would return to the valley to settle down eventually,” said Cashen.

Both of those things have come true and Cashen, along with Kehoe, will be welcoming the public to Wild Ambition Brewing for the first time on Saturday.

Wild Ambition Brewing is located at 1-3314 Appaloosa Road and you can find out more by visiting their website and social media feeds.