Beliefs Collide in UBCO Discussion on the Meaning of Life

Bringing six individuals together from different backgrounds, diverse world perspectives, and contrasting beliefs may sometimes be a daunting and rather arduous endeavour, but Tuesday evening’s seminar held at the University of British Columbia Okanagan campus proved that with mutual respect and an open mind, finding common ground is easier than one would believe.

In what was the first of hopefully many seminars to be held at the local university, a Muslim, a Christian, an Atheist, a Sikh, and two Jewish women sat down and participated in a respectful and intellectual discussion that delved into some of life’s toughest questions. 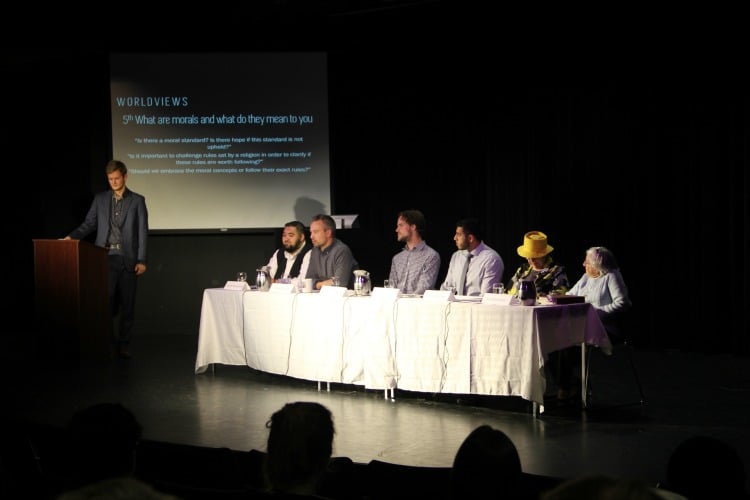 Through their open minds and educated contexts, the panelists of teachers, students, and lecturers sparked a lively, enlightening, and intellectual debate, probing the crowd of around 80 to 100 students and faculty to take a moment and self-reflect.

The event started with MC and organizer Andrew Kitchener allowing the six panelists a moment to introduce themselves, followed by five questions ranging from concepts of morality to the idea of sin and forgiveness. 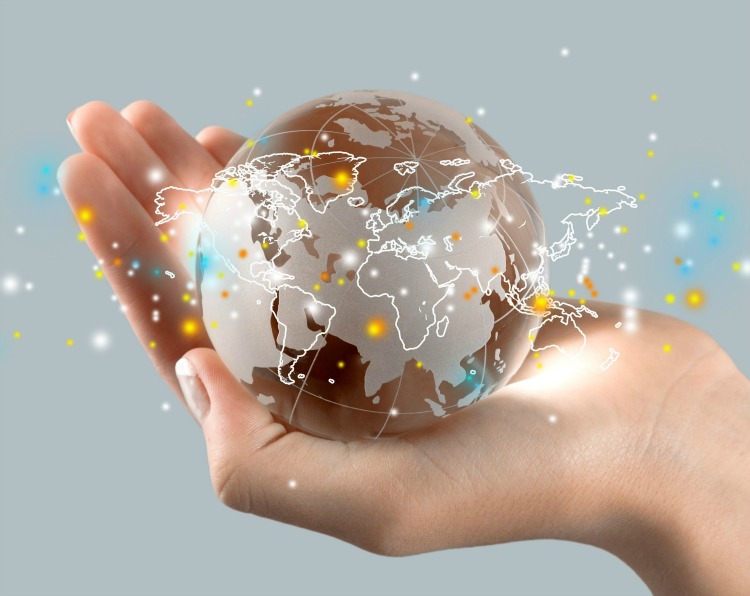 Beginning with a hard hitting question, the MC asked what is the purpose or meaning of life?

Shaykh Navaid Aziz, a well-versed Islam scholar, said the answer to this question is subjective: a fundamental question that we all need to ask ourselves. However, from his Muslim point of view, the meaning of life is strengthened through worshiping God, and living a just and merciful life.

“It’s pretty explicit that we’re here to serve God. Now, I think where people sort of go astray on this issue is, what does worship of God actually look like?,” said Aziz.

Meanwhile, Jewish scholar and educator Susan Shawlee said the meaning of life is what you make of it. 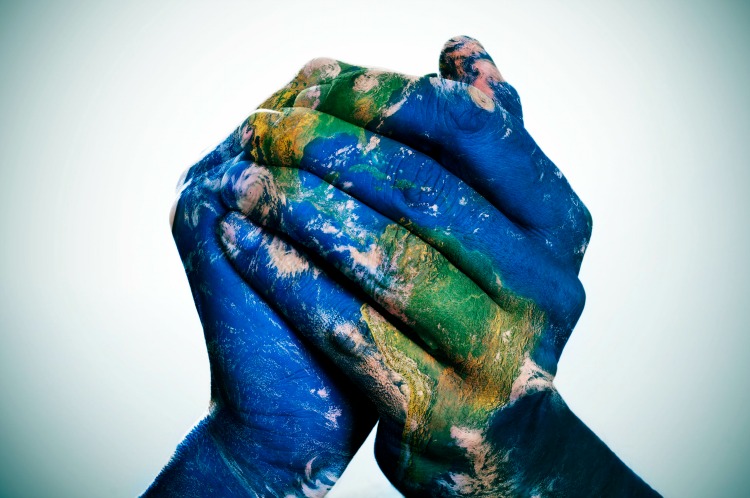 When it comes to dying and perceptions of the afterlife, the speakers of the Muslim and Christian faiths held very similar beliefs in terms of judgement, heaven, and hell. Whereas representatives of Judaism, Sikhism, and Atheism felt it was more important to focus on this life, instead of an unknown afterlife.

“One day we will die, and we cease existing. But every day until that day, we’re alive, and that’s kind of the important part. Basically, we should entirely focus on this life and making it meaningful for us and everyone around us. This is our forever, when we talk about life, it is one eternal moment,” said Dr. Andrew Veale, Atheist.

Arguably the most controversial question of the night—can our beliefs co-exist? 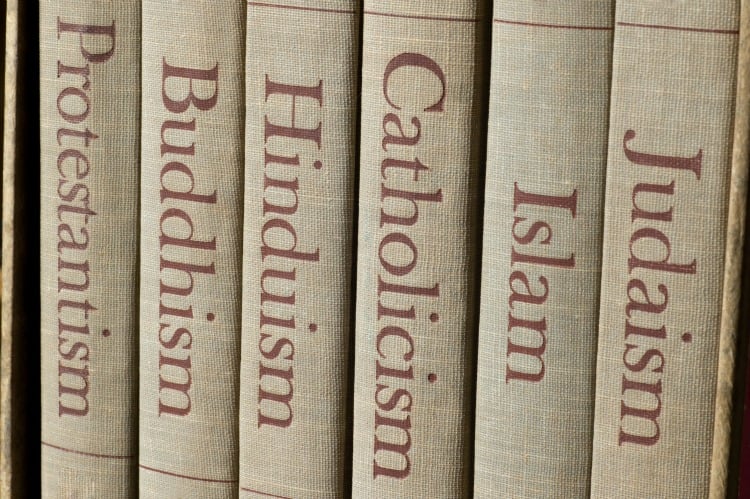 For Atheist Dr. Veale, co-existing is about taking a step back, educating oneself, and listening respectfully to the views of those around us.

“There is no better view, but there is a good process we should go through.”

On the other hand, some religions do acknowledge a rather exclusivity component to their faith.

“Yes they can, because it’s essential to the Christian faith that we believe not all will follow the words of Jesus, not all will obey his summons to follow. [...] And it’s not up to us to coerce them to believe, something that many professing Christians have lost sight of. [...] It’s up to you, you have the choice, and we respect that choice, and we love our Islamic brothers, our Atheist brothers, and all of our brothers and sisters in this world,” said Dr. Jon Vickery, Christian.

“But in another very definite sense, it’s no. [...]And it’s no because of the words of Jesus: he said I am the way, I am the truth, I am the light. [...] no confessing Christian can say, in terms of human salvation in finding redemption, that religions can coexist. Now, my hope and trust is that we live in such a world that I may hold such exclusive claims and not be shunned and bullied by my brothers and sisters, that our sense of community together can allow for my opinions and Christian opinions, as well as others.”

Diverse world views aside, all six participants agreed that co-existence is not only possible, but essential for the progression of our society.

“Regardless of what our views may be, we are still required to love and mutually respect one another, because what unites us as human beings in the current here and now is more important and more relevant to our coexistence than what we theoretically may believe as a form dogma,” said Aziz. 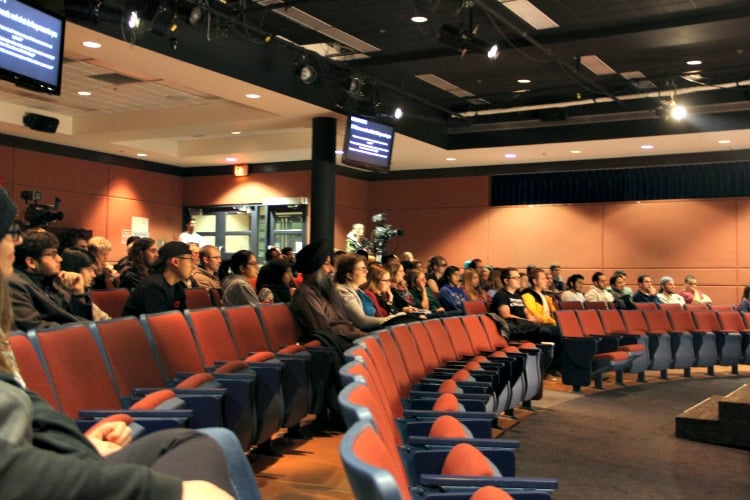 The lively discussion left the audience intrigued and hungry to learn more, and even prompted some viewers to question their beliefs in a more positive and intellectual manner than ever before.

“I’m trying to come to terms with certain aspects of religion, just because I want to form my own opinion rather than just inherit my belief. What is the meaning of life? We don’t have the answer, but it’s important to contemplate,” said second year computer science student Nicholas Chima.