After surviving a horrific car crash on the Okanagan Connector, a local man has taken to social media in the hopes of finding and thanking the people that saved his life.

CEO for Roundhouse Radio Don Shafer was on his way to Kelowna from Vancouver to visit his family on Friday, December 11th, when his vehicle hit a patch of black ice just past Merritt and flipped several times before coming to rest at the side of the highway.

“I thought I was driving cautiously, but obviously five or 10 minutes down the road I came up to a big bend and lost control of the jeep. It spun into the median and flipped a few times onto the other side,” explained Shafer.

Shafer splits his time between Vancouver and Kelowna, as his family lives here in the Okanagan, but his business operates out of Vancouver. 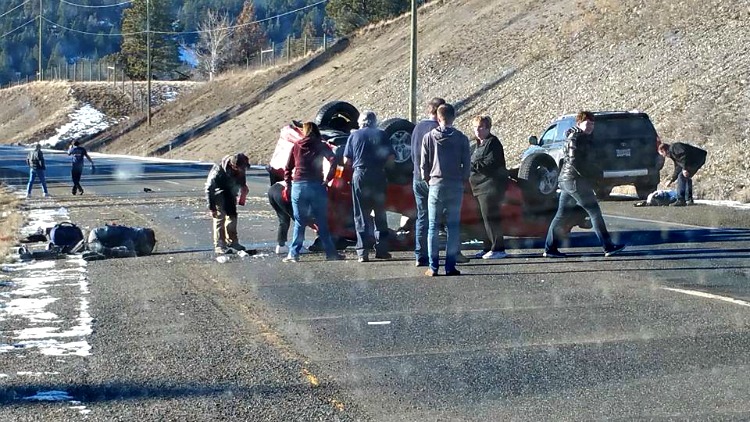 Shafer said that he was unconscious for a while, and was eventually transported to Kelowna General Hospital.

Before the ambulance arrived, four nurses, along with a few other good Samaritans, stopped to help out and bandaged Shafer up as much as possible.

“I got thrown around from the front seat to the back roof of the jeep,” said Shafer. “According to one of the witnesses, I had a couple of major cuts on my head and on my face, to the point where they could see bone. I was bleeding quite a lot too, so they kept me warm and put me in a blanket and stopped the bleeding until the ambulance got there.”

A little shaken up, Shafer continued to illustrate his story to KelownaNow, emphasizing that he was incredibly thankful to the dedicated nurses who took the time to save his life.

Looking to properly thank the nurses, Shafer turned to Facebook for a little assistance.

“I want to try to meet each nurse individually and thank them, in writing and in person if I can,” said Shafer. “[What they did was] pretty exceptional, above and beyond the call of duty. I don’t think most nurses get the thankyous they deserve.”

Since the posting went live, Shafer’s story has been shared nearly 3,000 times and has garnered over 200 comments.

“You know the fact that I’m actually here having this conversation is probably pretty amazing, I’m a pretty lucky guy,” added Shafer. “I just want to thank the people who stopped because a lot of people don’t stop, a lot of people just keep going and figure someone else will do it.”

"You landed at the very back of the jeep on the roof," read the post. "I watched you bounce around as the jeep flipped. My wife called 911 as I immediately ran to you, gas was pouring out of the tank."

Ironically, Shafer had mentioned that prior to his own accident, he helped a woman get out of the ditch after she too hit black ice on the Coquihalla.

Shafer said that he’s a little bruised up and has a bit of a ways to go in terms of recovery, but suggested that he wouldn’t be here today if it wasn’t for the kindness of these four nurses.

“I’m just incredibly grateful. It’s not lost on me how many people stopped to help me and I just want to thank them.”