In the Okanagan Throwback series, expect to learn about prominent locations, businesses, families, early settlers and the odd court case that went down in the valley.

This week we look at the first bike race (as far as we know) in the Okanagan.

It's 1930 and the boys are ready to ride on their (what we would call) vintage street cruisers.

Even the kids are having a go at this lengthy ride.

The picture shows racers lined up at the start of the 56-kilometre race from Vernon to Kelowna.

According to a former Winfield resident and participant in the race, Hugh Bernau:

"Highway 97 was unpaved and parts of this road from Kelowna to Vernon did not hold up for any length of time to traffic.

Along Duck Lake was the worst, it soon became “washboard” and had a rather large number of holes! …I remember that I finished the course, but was a very weary young man at the finish.

Remember that we had no speed gears in those days!”

Here's a photo of Hugh Bernau, years later, not in a bike race, but as a distinguished gentleman at tea. 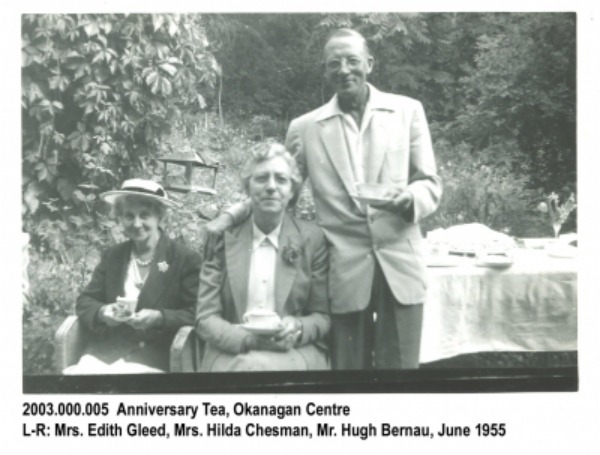 The Kelowna Courier and Okanagan Orchardist also reported on the race:

"Arthur Clarke of East Kelowna led Larry Evans by a half mile at Reed’s Corner but Evans closed the gap entirely as they went into the final sprint.

It was a game fight for the leadership that was only decided on the final straightaway down Bernard Avenue to the finish in front of the Post Office building...It was a splendid finish, a brilliant win and a game loss, the two riders well deserving the cheers of the crowd.

Both boys finished in good condition, after a heavy trip facing headwinds all along the route, and the time of two hours, twenty-one minutes and thirty three seconds for the thirty-five miles of pedaling through, at times, a near gale, is a creditable performance.

It was Oyama’s big day, for twenty-two minutes later H. Thomson, leading the “B” class riders hove into view and pulled over the mark just three minutes ahead of Ralph Bean, of Kelowna

...The crowd had another thrill when the two remaining riders in the “C” class, or bantamweight division came in fast with Bert Longley one minute ahead of Orville Watson." 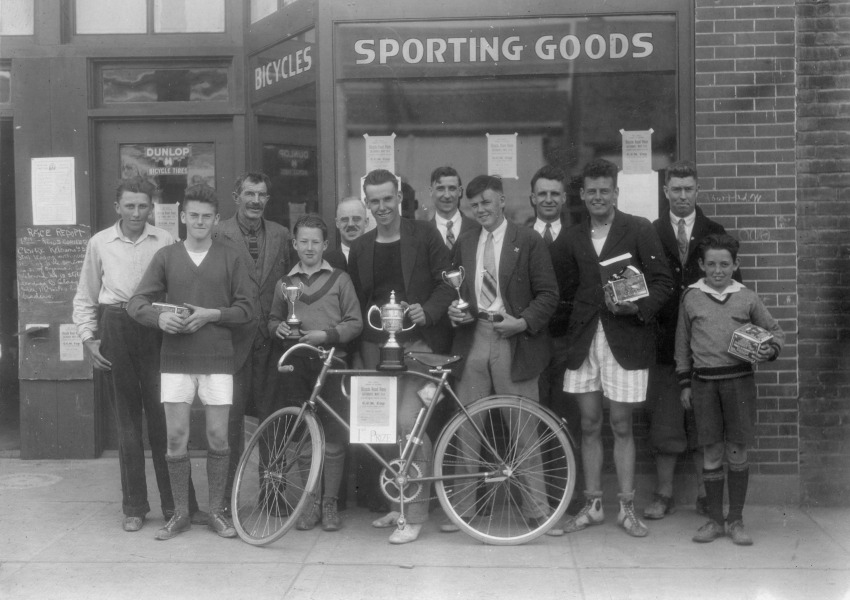 This photo shows the trophy winners for first and second place and some of the other riders from the race after the trophy presentation in Kelowna.

The second and final race was held the following year in 1931, but they raced from Kelowna to Vernon instead.

The times were a little quicker the following year, but Larry Evans still took first place again, with a time of 1:57:00.

In the under-17 "B" class, the top three places went to Kelowna-based riders.