(UPDATE: Oct. 3 @ 2:10 pm) – On Monday, Kelowna City Council agreed to rezone a property at the corner of Gordon Drive and Lawrence Avenue to allow for a rental only subzone.

The property at 1603 Gordon Drive will now be zoned as the CA1r – Core Area Mixed Use Rental Only zone.

This will pave the way for a 192-unit apartment building with a childcare centre on site.

City staff explained that the rental only subzone allows for a slight floor area ratio bonus, a 10% parking reduction and does not permit short term rentals.

Additionally, city staff said the proposal is consistent with several objectives identified in the Official Community Plan in regard to positioning community services in the core area while promoting a mix of housing types.

Next steps will include the city reviewing and considering the issuance of the development and variance permits. These reports are expected to be brought to Kelowna’s future mayor and council at a later date.

(Original story: Oct. 1 @ 12:48 pm) – On Monday, Kelowna council will consider an application to rezone a property at the corner of Gordon Drive and Lawrence Avenue to allow for a 192-unit apartment building.

The applicant, Vancouver’s PC Urban, is seeking a rental only zone to construct their long-term rental building which would also feature a childcare centre.

Currently, the property at 1603 Gordon Dr. has a single storey building on site with offices and a daycare.

The proposed project is a six-storey building atop a two level parkade. There would be 91 one-bedroom, 74 two-bedroom and 27 three-bedroom units.

City planning staff are supportive of the proposal because it meets several objectives in the 2040 Official Community Plan. 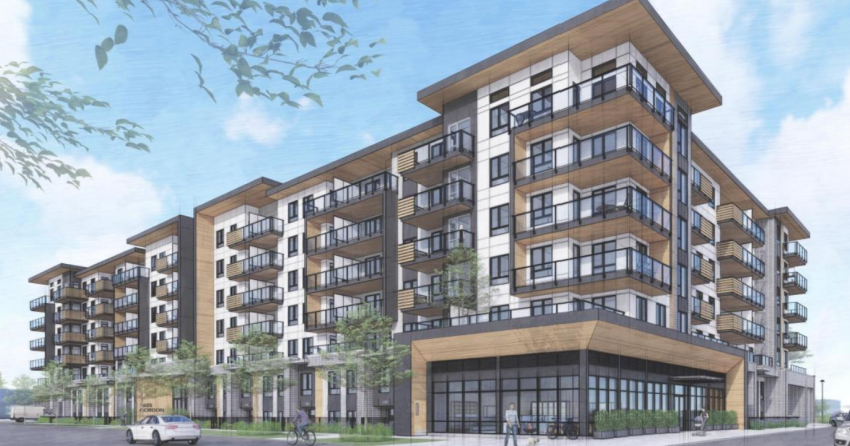 “It is consistent with several OCP objectives regarding strategically locating community services in the Core Area and promoting housing diversity through rental tenure,” explains the report.

The rental only subzone would not allow for short-term rentals and would require principal residents to live in the building 270 days per year.

There were a few variances included in this proposal that were triggered by a road dedication on Gordon Drive. This includes a height variance and site coverage variance.

However, those variance will be addressed in the future when the city considers the development and development variance permits.

Kelowna City Council will review this application and make a decision during the regular meeting scheduled for Monday, Oct. 4 at 1:30 pm.