Patrons at popular downtown bar Doc Willoughby’s will notice a rather straightforward message on their bill leading up to the provincial election. 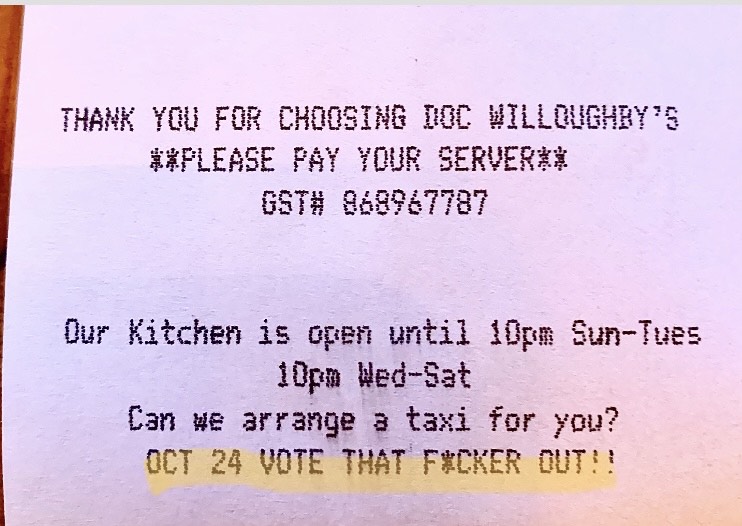 While owner Dave Willoughby admits the slogan is a bit crass, he says it symbolizes the distress his industry is under.

“We shut down for months and have followed every new restriction to a tee, but we’re not getting rewarded,” explained Willoughby.

“It's a cry for help in some ways after another blow to an industry that simply can’t take many more.”

On Sept. 8, BC health officials implemented new restrictions that shut down drinking by 10 pm at all bars across the province in an effort to stop the surging spread of COVID-19.

However, Willoughby says those new restrictions are misguided and have created a double standard.

“It’s especially hurtful that liquor can be sold from 7 am until 11 pm at government liquor stores,” he said.

“Every night we have people leaving our bar at 10 pm and heading to a liquor store and then to somebody’s home where there is no contact tracing to continue drinking.”

Health officials in Quebec recently introduced similar restrictions, but only in regions of the province hardest hit by COVID-19's second wave such as Montreal and Quebec City.

Meanwhile, there's only been 15 new cases identified in the Interior Health region over the past two weeks compared to over 1,000 in the Vancouver Coastal and Fraser Valley health regions.

“Regional targeting and restrictions can work but this government doesn’t want to do it,” added Willoughby.

Dr. Bonnie Henry has maintained the provincial government is not involved in the decision made by health officials.

However, Willoughby believes the BC Liberals would be more sympathetic to small businesses if in office.