Council approved the development permit with a 6–1 vote.

Councillor Charlie Hodge was opposed due to the height of this building which is located along the waterfront, something he does not support.

Councillor Brad Sieben excused himself due to conflict of interest and councillor Maxine DeHart was not present at Tuesday’s meeting.

Westcorp Inc. received development permits in 2018 and 2020, however, both expired and the developers say they faced various challenges with the COVID-19 pandemic and supply chain issues.

Gail Temple, vice-president of operations for Westcorp, said that they were days away from opening their presentation centre in March 2020 and then the pandemic struck.

Temple pointed out how hard the hotel industry was hit which resulted in their brand partner furloughing their employees. She added that even the investment and lending climate for hotel projects was also impacted.

“While it is true that this project was delivered a significant blow with the forced pause, we still strongly believe in this project and are committed to try to make it happen,” stated Temple.

Westcorp was back in front of council Tuesday night to renew the permits to develop the proposed hotel and residential project. 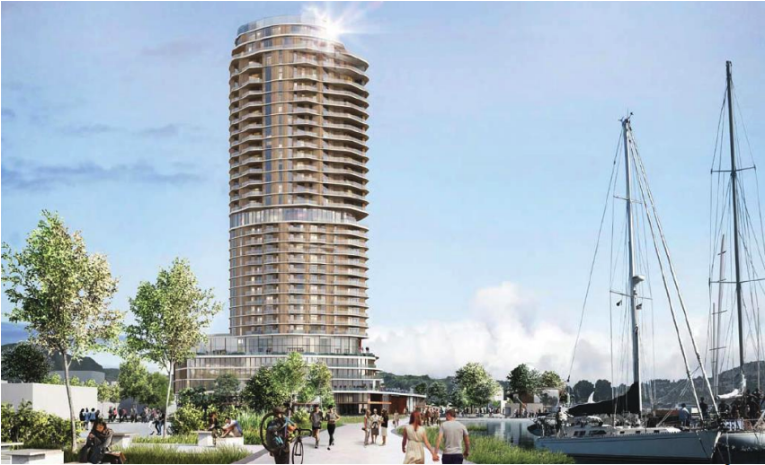 “Despite the challenges of this two year interruption, we remain committed to bringing this project to Kelowna’s downtown core,” added Temple.

“It was, and is, the right project for that location. We fundamentally believe a hotel is the right thing to do here.”

There have been only minor changes to the proposal submitted in 2020. The building will have 17 storeys for the hotel which will now have 175 hotel rooms, down from the 184 proposed in 2020.

Design plans show a restaurant on the 18th floor.

There will be 65 residential units, meeting rooms, a spa and wellness centre and room for commercial units on the ground floor. There will be 268 parking stalls for the building.

In 2020, the developers proposed a public realm and interface with Kerry Park and a plaza on Queensway.

Temple said this will not change, however, the proposed cost for the landscaping has increased drastically due to inflation and supply chain issues.

“We will work with city staff to ensure that the interface works well for the evolving plans for Kerry Park,” stated Temple.

Next steps will see Westcorp finish their development plans and apply for their building permit.