Over 50 residents gathered outside of the Kelowna Law Courts on Saturday afternoon to rally in solidarity with the Wet’suwet’en nation of Northern British Columbia.

The nation is currently battling against the build of a 670-kilometre natural gas pipeline by Costal GasLink (CGL) on their traditional territory. 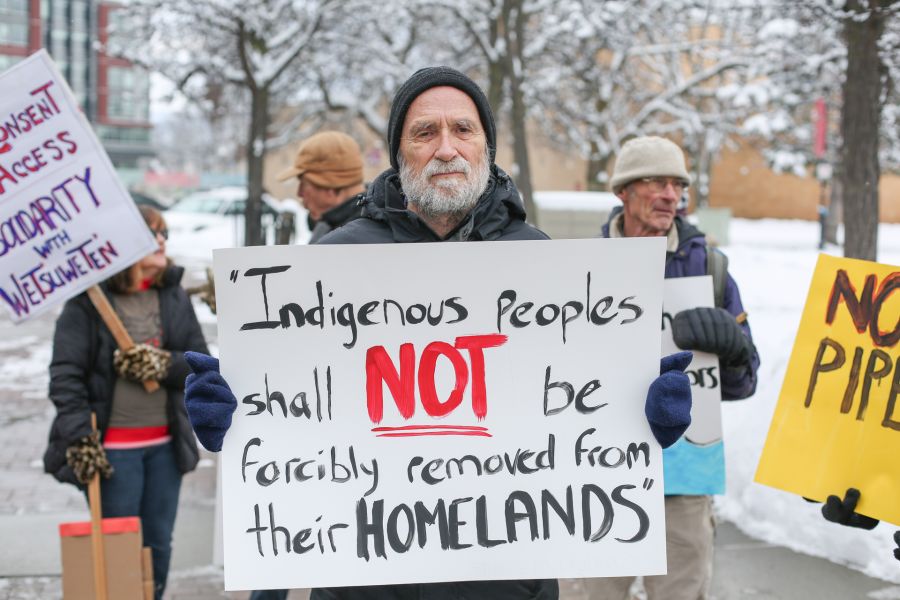 Despite the Unist’ot’en serving employees of CGL an eviction notice at the beginning of this month, it was announced by CGL on Monday that work on the pipeline would continue on the site near Smithers, prompting a call out by the Wet’suwet’en and Unist’ot’en for solidarity.

This week, we'll continue to remobilize construction crews across the right-of-way in anticipation of work resumption. Clearing, grading, workforce accommodation establishment & other activities are expected to continue as scheduled. Learn more: https://t.co/Bl7X2IjWpS

A group of Central Okanagan individuals banded together to organize the region’s own rally, following suit of many communities across the province and country.

Co-organizer Caitlyn Donadt says she believed it was her “responsibility” as a settler living on unceded Sylix territory to jump into action.

“I wanted to organize the event because I am a settler here and I have been learning a lot about colonialism and how Canada has been violent in dispossessing indigenous people from their lands,” said Donadt. 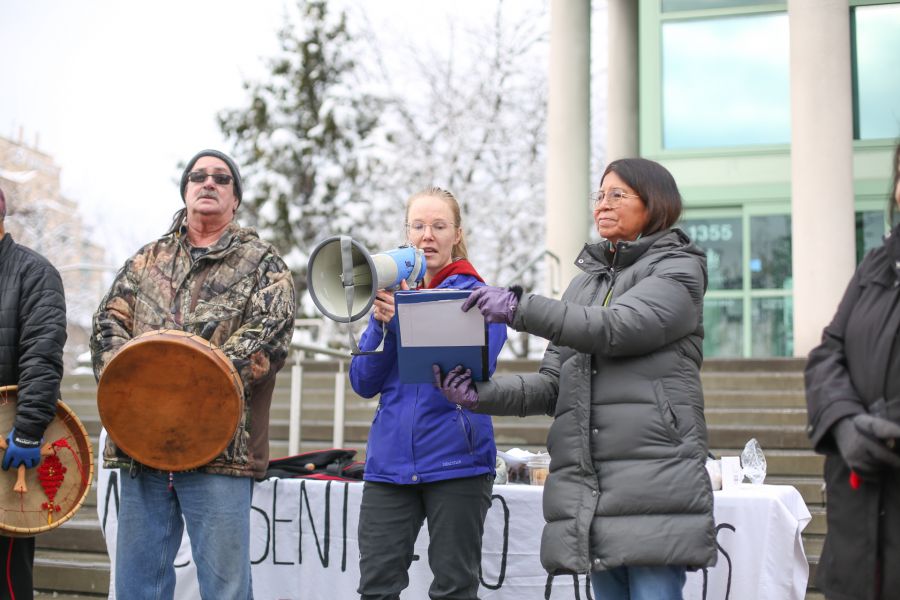 “I had first found out about what’s been going on with the Wet’suwet’en last year when the RCMP raided. I had been keeping an eye on things and when they made a call out for solidarity I felt that it was my responsibility to answer that call.”

Attendees congregated in the courtyard, holding colorful signs that read impactful statements such as “Colonialism = Crime,” “No consent = No access” and many more. 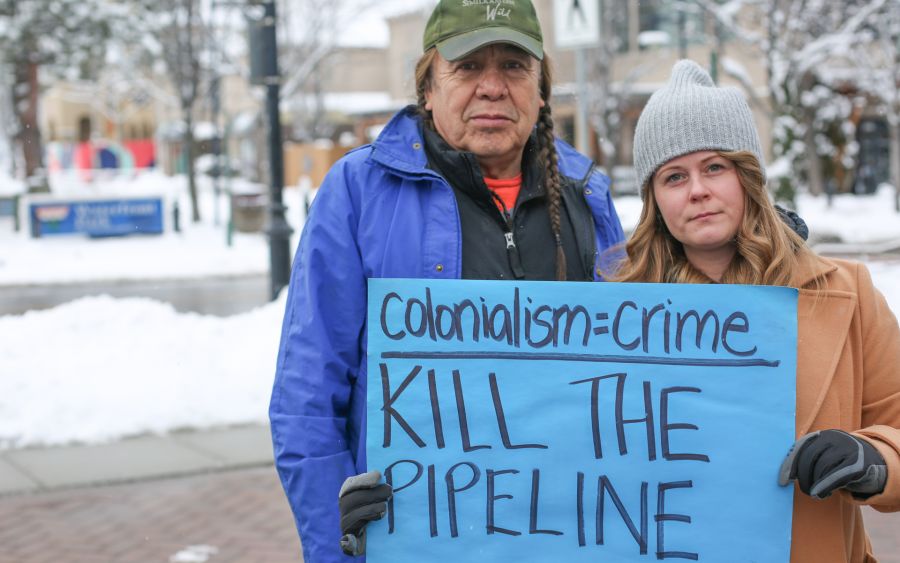 The event began with an elder lead prayer before the crowd joined in unison to drum and sing along to the traditional Warrior song.

Donadt then shared information on the series of events that have taken place thus far in chronological order, including the BC Supreme Court Justice Marguerite Church granting an injunction against members of the Wet’suwet’en nation and the rejection of the decision by all five of the Wet’suwet’en clans Hereditary Chiefs.

Wet'suwet'en Solidarity Rally in downtown #kelowna outside of the Law Courts. pic.twitter.com/C8GR8Q8C4H

The modest but mighty crowd was comprised of a mixed bag of demographics which included members of the West Bank First Nations, students and non-indigenous individuals of all ages. 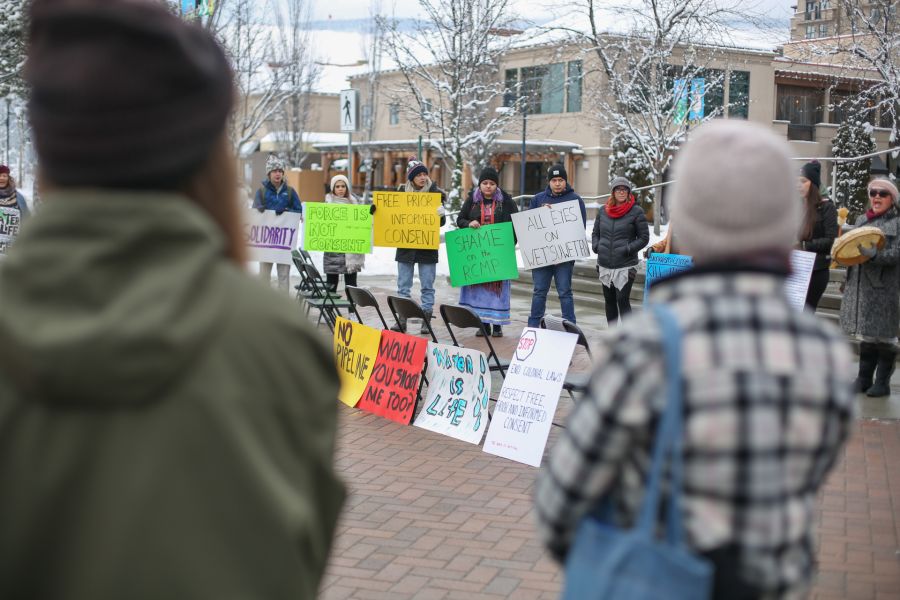 Attendee Pam Kemp is no stranger to voicing her opinion, as she frequents rallies on climate change and other global issues hosted here in Kelowna.

Holding a sign with pride that read “Settlers in Solidarity” Kemp says she attended the event both to raise awareness of the issues connectedness to the environment, and the “government’s attempt to build on land that does not belong to them.” 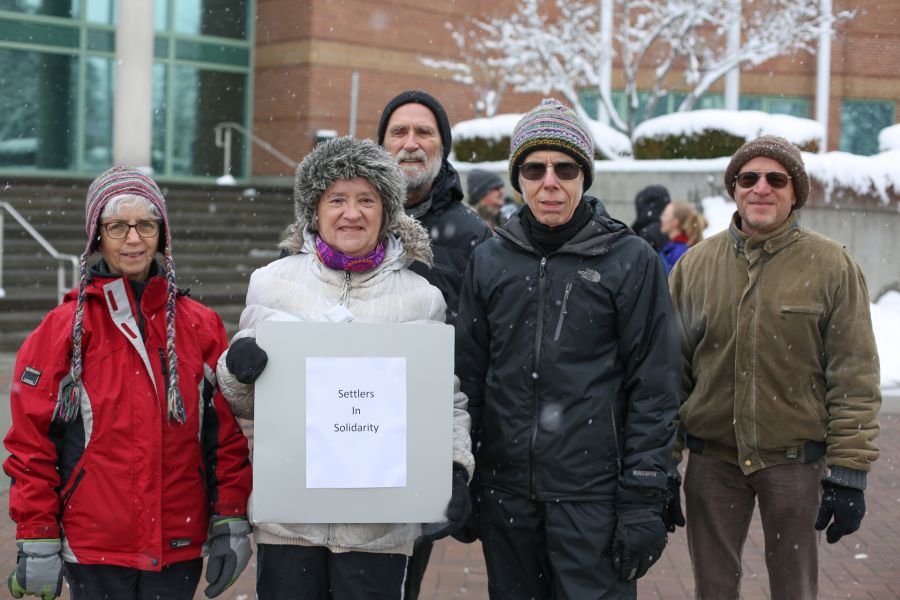 “This is not our land, this is unceded land and we are actually settlers who are here because we are tolerated to be,” she said.

“In some instances, we are the ones harming the land, and I just feel like those who have been here the longest and owned it initially should be the ones to have a say.” 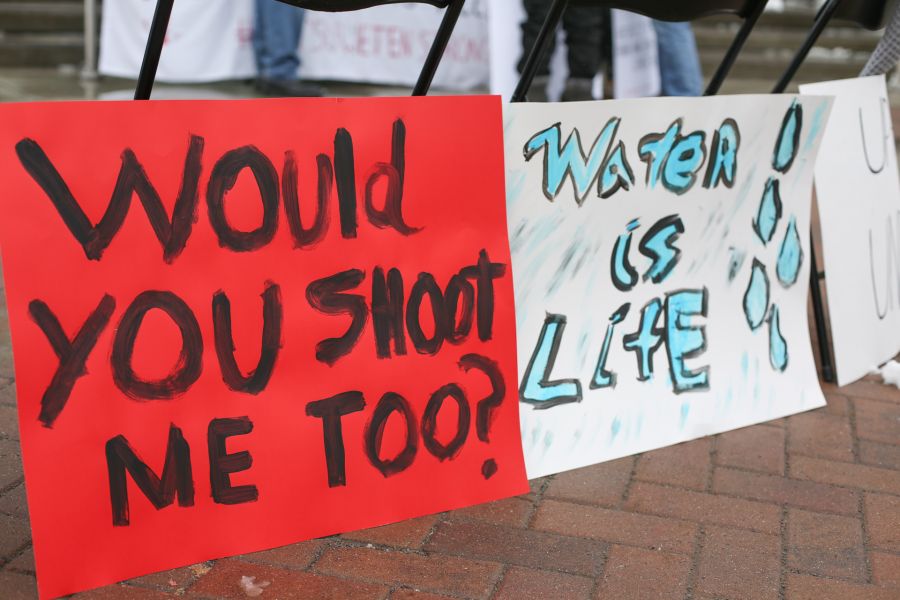 Indigenous attendee, Skulaxan, says he attended the rally to show support and solidarity to those who represent the same ideologies as many in the Okanagan do.

“I am here to support for the people who are just trying to look after and protect the land, those people over there represent the same things we represent here in the Okanagan and that I believe in,” he said. 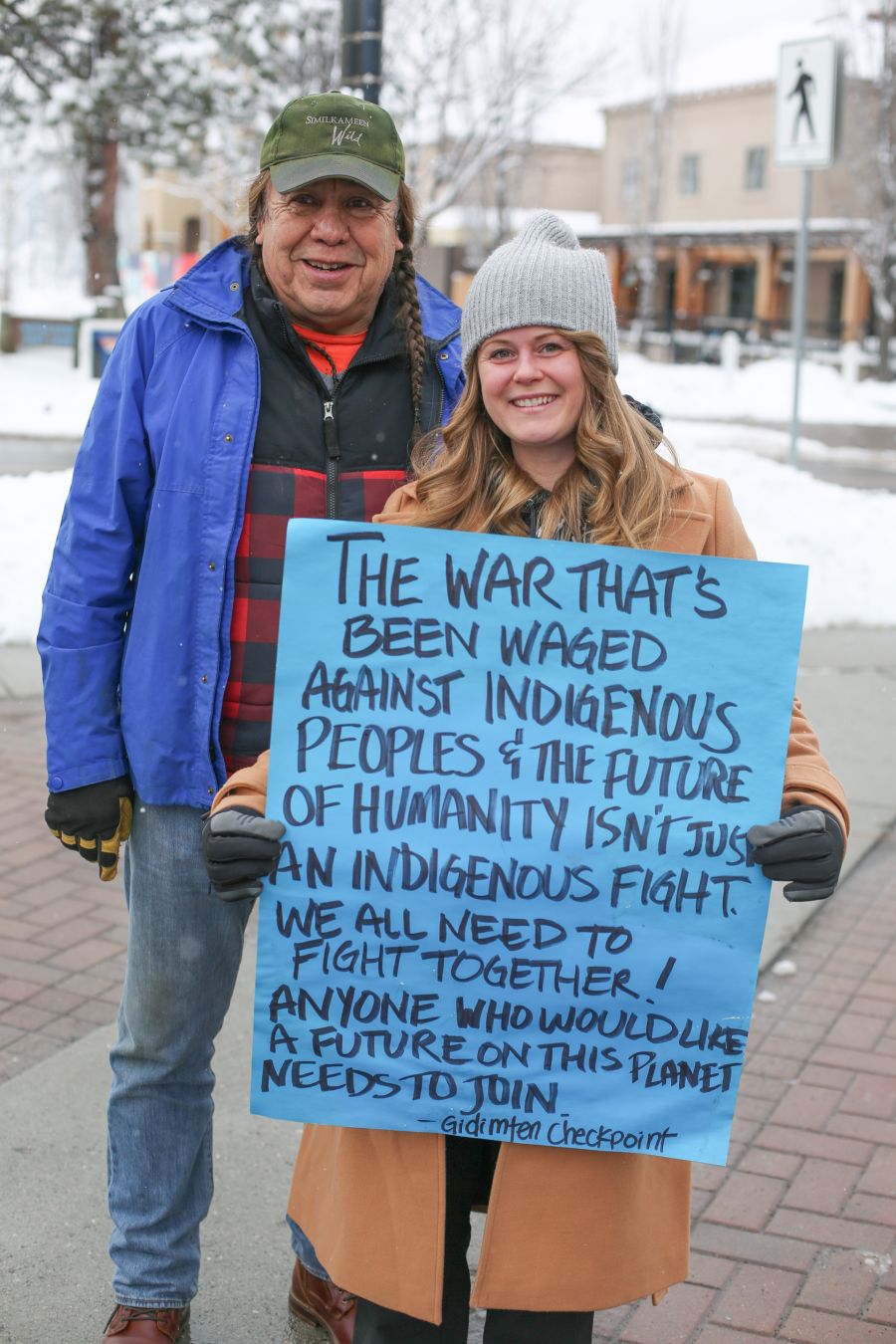 Skulaxan added that he also isn’t surprised that even in 2020 there is still a fight over the rights to First Nations land.

“This type of thing has been happening for the last 560 years. Is it more important to have dollars and cents? I guess that is what this society is all about, one day we are not going to be able to drink the water, then what,” he said. 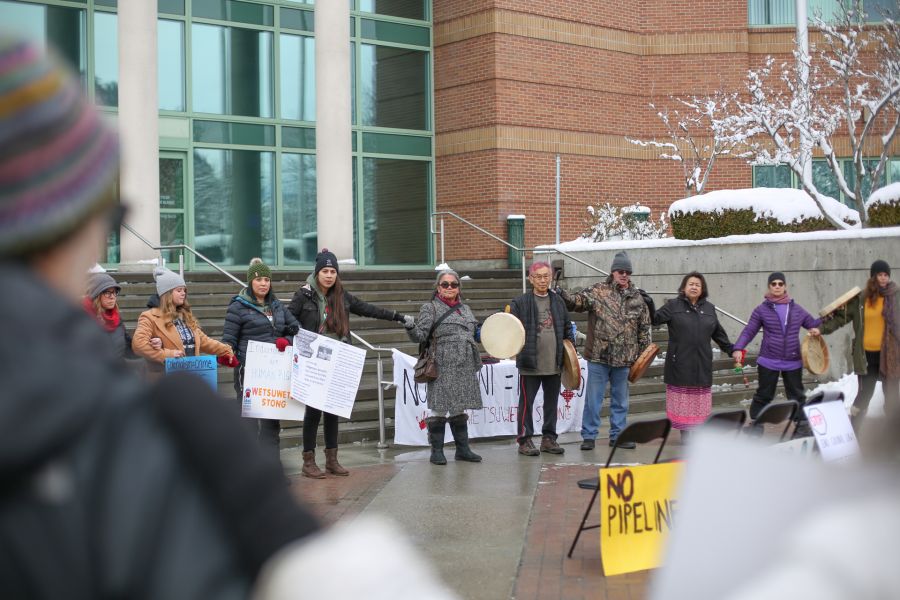 “[This issue] is about more than just the water and the land or oil and gas, it is about corporations changing laws to fit the colonial direction.”

For those who were unable to attend the rally but still wish to show solidarity in some form or another, the Unist’ot’en have created an online supporter toolkit that offers many ways to get involved. 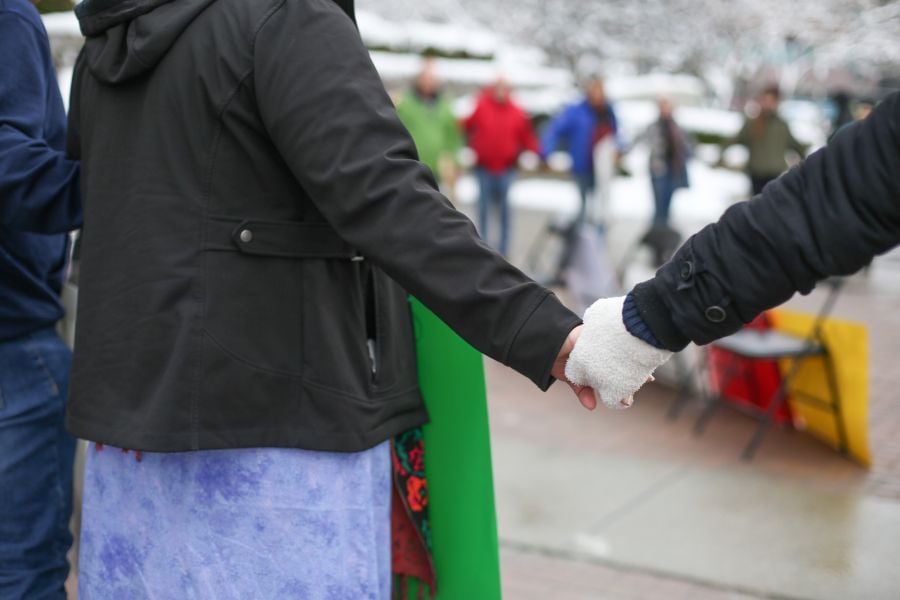