UPDATE: Fate of historic Kelowna house to be discussed at public hearing

(UPDATE: Nov. 14 @ 3:05 pm) – The decision to give heritage designation to a Kelowna house that is more than 100 years old house will be discussed at a public hearing later this month.

The homeowner is requesting that the historic J. N. Thompson House, which was built in 1911, be designated as a municipal heritage building.

Councillor Luke Stack thought it was an important opportunity to protect and preserve the 111-year-old house.

“I’m just happy to see this,” stated councillor Stack, who added that he used to live near the house when it was located on Richter Street.

“It's a nice keepsake for our community as we look back on some of the beautiful homes that were once built in the downtown core.”

For more information on the house, feel free to continue reading the original story below.

(Original story: Nov. 13 @ 1:17 pm) – On Monday, Kelowna City Council will be asked to give special status to the J. N. Thompson House that was formerly located at 1875 Richter Street.

Shona Harrison purchased the house in 2015 and began restoring it.

In 2021 she moved the Queen Anne revival style house to the June Springs Road area to escape "the wrecking balls of developers."

Currently, the house is listed on the city’s heritage register but does not hold designation status.

“I respectfully ask that she, this beautiful and noteworthy Queen Ann Revival, be confirmed as a designated heritage house to ensure her longevity for generations to come,” said Harrison in a letter to the city. 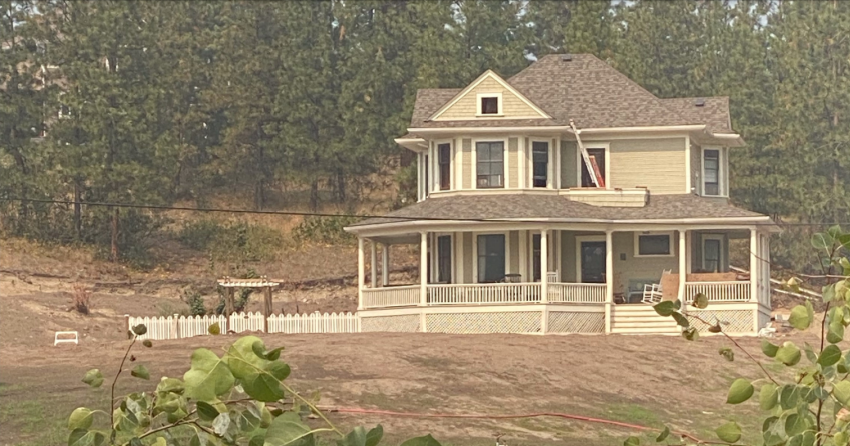 City staff are supportive of the heritage designation in order to preserve the historic building.

The large, two-storey wood frame home was built in 1911 and is described as a fine example of the Queen Anne Revival building style.

Harrison’s work on the house was recognized by Heritage BC in 2017 and was awarded the 2017 Heritage Award for Heritage Conservation.

“It has survived in virtually intact original condition and is particularly noteworthy for the rarity of its style in Kelowna, its imposing size and its grand setting on a large lot,” explains city staff’s report.

John Nelson Thompson (1870-1956), whom the house is named after, was a prominent citizen and businessman in Kelowna, adds the report.

He was a tobacco grower, an orchardist, a founding member of the central Okanagan Land and Orchard Company and a partner in the Morrison-Thompson Hardware Store.

If heritage designation is granted for this house, it would provide formal legal protection and the owner would be required to obtain a Heritage Alteration Permit to make changes to the building in the future.

Kelowna council will hear more on this matter during the regular meeting scheduled for Nov. 14 at 1:30 pm.