The University of British Columbia Okanagan (UBCO) has submitted an application to the City of Kelowna for a downtown campus development at the site of the former Daily Courier.

On Dec. 23, UBCO applied to rezone a portion of the property at 550 Doyle Avenue to a Comprehensive Development zone and to build a tower that would be used for institutional, commercial and residential purposes.

The Mission Group also submitted an application to develop two additional buildings in the same area.

UBCO's proposed development would be about 38,500 square feet and would include underground parking, student housing, academic space, a courtyard, cafe, and medical clinic.

The application is expected to be presented to council in the new year and UBCO hopes that construction can begin by mid-2022. 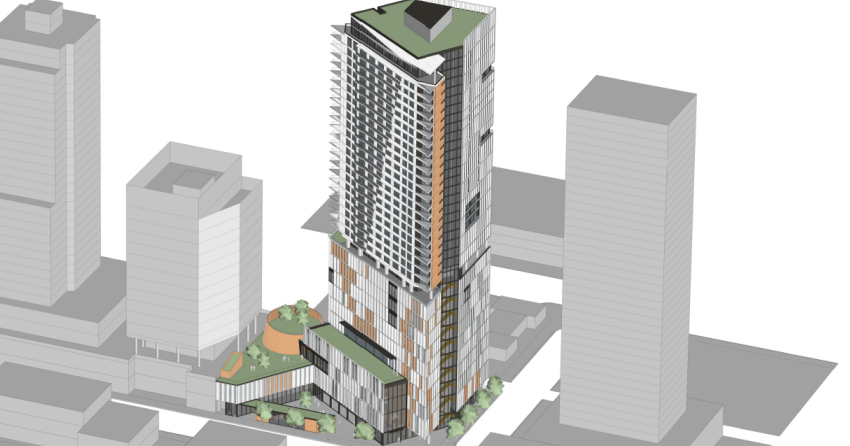 UBCO’s proposal explained that the building would be 34 storeys which would include two storeys for offices, eight for academic spaces and 24 for student housing.

There would also be four storeys of underground parking that would provide over 250 parking spots plus bicycle and electric vehicle spaces.

The vertical design of the campus “is something quite new in the history of architecture” and would include a unique double diagonal cut to facilitate the amenities while opening the building to the neighbourhood.

The first diagonal cut would be located on Doyle Avenue with the goal of creating a transitional space between the campus and the neighbourhood.

The second diagonal cut would be along St. Paul Street and would create a semi-public courtyard.

“Both diagonal cuts, like chiseled elements of the urban grid, will provide a distinctive geometry compared to the existing and anticipated geometries of the future neighbouring high-rise buildings but also, will open views opportunities within the traditional urban grid and tower configurations,” the report explained.