A Kelowna woman was brought into custody over the weekend after an incident at Value Village in Rutland.

According to the RCMP, the woman had been asked to leave the store on Sunday afternoon after refusing to wear a mask.

However, she also refused to leave, which led to staff members calling the RCMP around 4 pm since she was now considered to be trespassing on private property.

Officers arrived on scene and made “numerous efforts” to get her to leave peacefully, but she once again refused and had to be brought out in handcuffs.

That part of the ordeal was caught on video and posted to Twitter by @Jules50278750, who said her husband was also briefly detained by police for calling the store manager a communist.

**The Twitter user who posted this video has deleted it since the time of publish.** 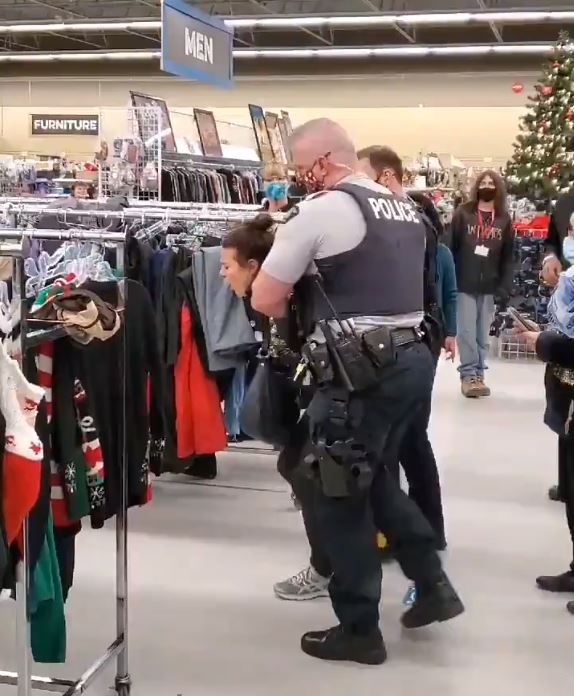 “She was taken into police custody for allegedly causing a disturbance and obstructing a police officer,” explained a Kelowna RCMP release.

“During the arrest, the woman allegedly struck the officers several times, screamed and refused to cooperate.”

The 41-year-old has since been released from custody on conditions for a future court date and the matter will be referred to the BC Prosecution Service for review.

The Kelowna RCMP also released the following statement regarding their involvement and duties when it comes to incidents like this:

The RCMP's focus remains on educating and encouraging members of the public who may not be following the safety measures set out by public health authorities. Kelowna RCMP note that businesses have the responsibility due to the recent public health order to ask their patrons to wear face coverings or non-medical masks while on premises and to refuse service for non-compliance. Individuals have the right not to attend the business if they decide not to wear a protective mask to help prevent the spread COVID-19. We highly encourage everyone to respect provincial health orders for their safety and the safety of others.