It’s official. Another brewery is set to make its mark in Kelowna’s north end.

Railside Brewing quietly opened its doors last week after eight long months of renovations, and while they didn’t make any sort of grand announcement about their launch, it has been non-stop busy for co-owners Matt Grieve and Rob Leinemann.

Grieve and Leinemann have been best pals since high school, and with years of friendship under their belt, they had no trouble jumping into a brand new venture together.

Both coming from trade backgrounds, the pair used their skills to renovate and revamp the space that has been in the Leinemann family for years.

“My dad built this building in 1977. We actually found some of his handwriting on some posts when we doing demolition so we kept that out on display,” explained Leinemann.

“My mom actually also moved to Kelowna in 1950, and came into town on the old rail line, so there is a lot of family history on both my mom and my dad's side for this location.”

As for hopping into the brewery business, Leinemann has been brewing in his garage for the past three years and decided it was time to take his ales to the public.

When the idea was being tossed around two years ago with his best mate, the duo both laughed and said it was easy as saying “yup, let’s go for it.”

“We knew it was going to be hard, but it was just an amazing journey actually,” said Grieve.

Beers at Railside Brewing are made out of a small pilot system, which gives these brewmasters the ability to make some more creative recipes in smaller batches in-house.

As for the friendly brewing community, neighbours like Red Bird Brewing and Unleashed Brewing have been helpful in getting the ball rolling for the first stage of Railside’s beers. 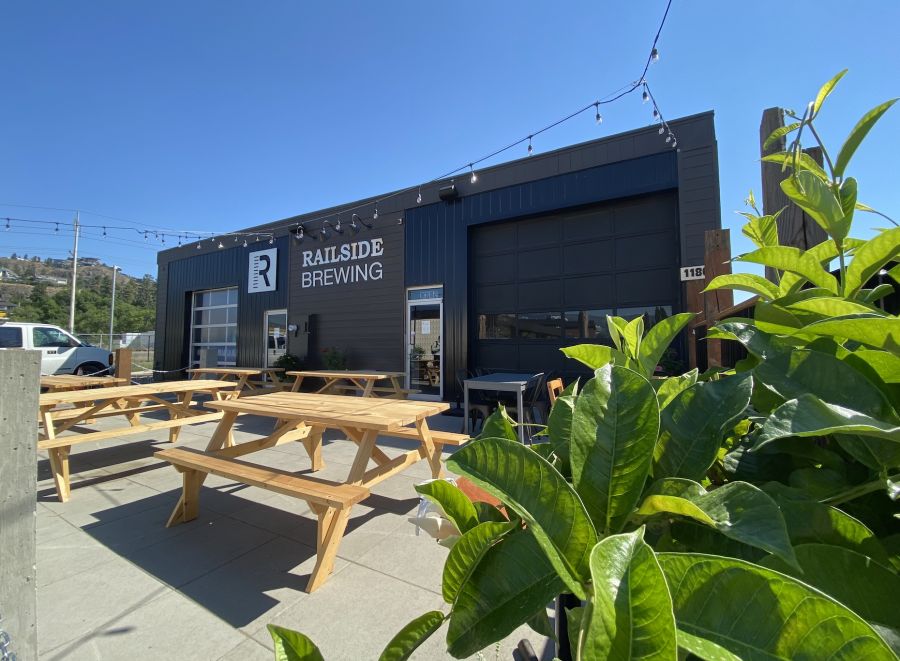 “We would take our recipes and our grain and work with them to make our first stage, which is wort, and then we transfer it here and pump it into our fermentors and we turn it into beer here.”

Beers like the Belgian Wit, served with a slice of orange and the Summer Ale which is a classic that Leinemann first mastered at home, are already proving to be fan favourites in the community.

Those looking to stop in for a cold one are welcome to pull up a chair on their large patio or snag a seat inside to sit at the homemade bar top, made of wood from Leinemann’s father's old shop.

They've got a few snacks to nibble on while you’re indulging in a beverage or two, like chips and salsa or cheese and crackers, and they’ve even welcomed a few food trucks into the parking lot, which they hope will become a reoccurring theme.

You can check out Railside Brewing for yourself on 1186 High Rd. in Kelowna. They are open from Tuesday to Sunday.