Battle Of The Bridge is back: Voodoos vs Bears

School pride will be on the line Friday in the latest edition of the Battle of the Bridge.

With the Rutland Voodoos having secured a playoff berth in the B.C. Secondary Schools Football Association for the first time in seven years and West Kelowna’s Mt. Boucherie Bears having been eliminated, the final regular-season game at the Apple Bowl (4 p.m.) is meaningless — as far as the standings are concerned.

But without a win against the Bears in the past decade, the Voodoos — 5-0 in AAA Pacific South Division play this season — are not only anxious to end the long drought against their Central Okanagan rivals but are also looking to establish momentum as they approach a rare foray into the postseason. 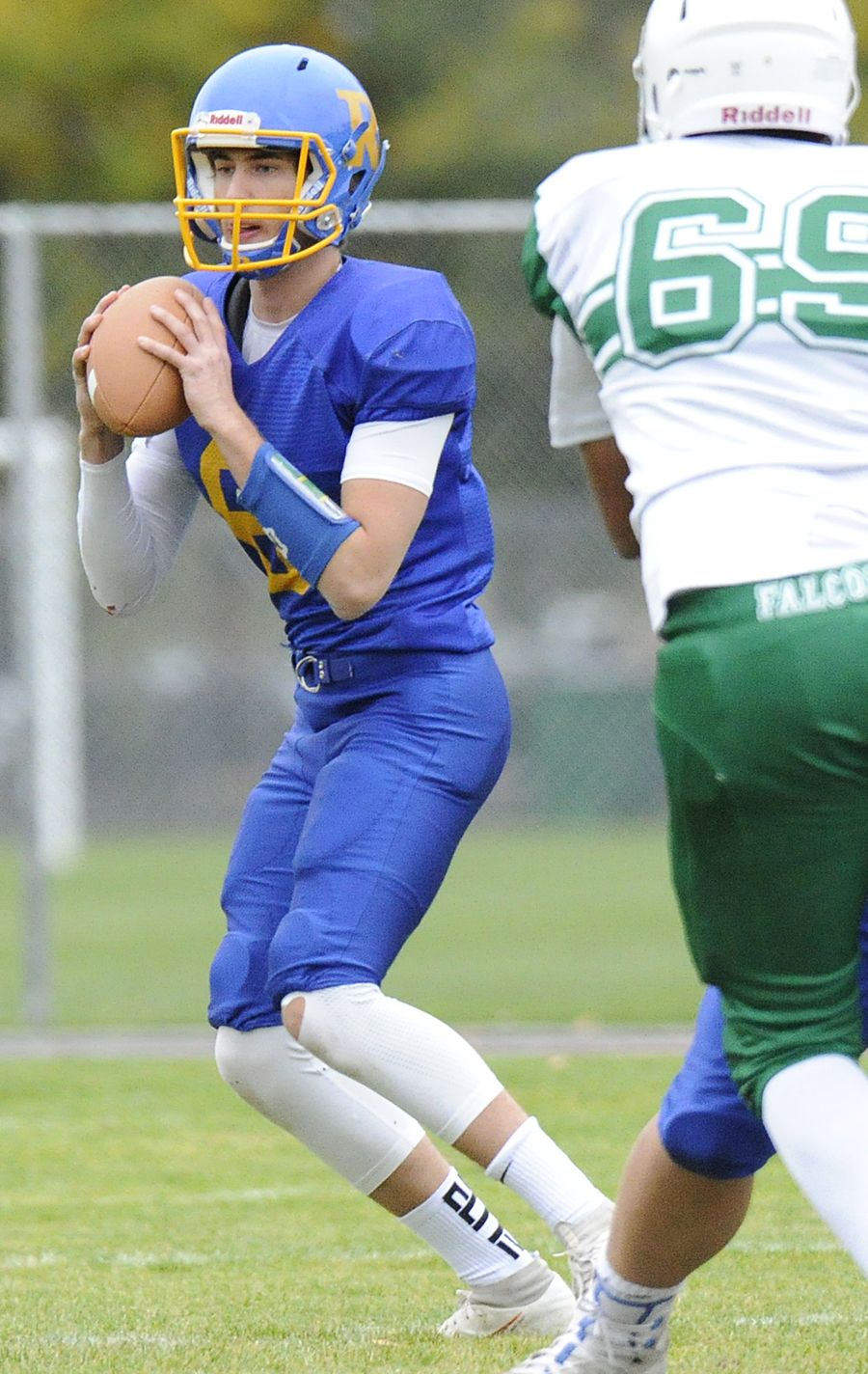 Meanwhile, Boucherie, 3-2 going into Friday’s encounter, has its sights on next year as MBSS continues to rebuild its football program.

The Bears are coming off an impressive 48-14 win over the West Vancouver Highlanders in which they displayed their depth at running back as Brody Arrol (eight carries for 79 yards), Aiden Wiberg (10 for 76) and Nicholas Stansfield (nine for 70) each covered more than 70 yards along the ground against the visitors at the Apple Bowl. Jacob Vodarek added 12 yards on three carries and contributed three touchdowns to go along with a 24-yard touchdown run by quarterback Isaac Matity.

Complementing the ground attack will be the high-flying air corps, including Bronte Gallo (three receptions for 29 yards against West Vancouver), Alex Petersen (two for 30) and Peyton Moore (1 for 14).

Directing the offence will be quarterbacks Ben Craddock and Matity, a transfer from Regina.

Defensively, the always-tenacious Gallo anchors the Bears, coming off a five-tackle performance against West Van. Mitch Ewasko and Noah Schile came through with four takedowns apiece while Marshall Punch lived up to his name with three tackles and an interception which he ran back 45 yards. Vodarek, Kristian Corbett and Slade Kuchera all pitched in with three tackles each. 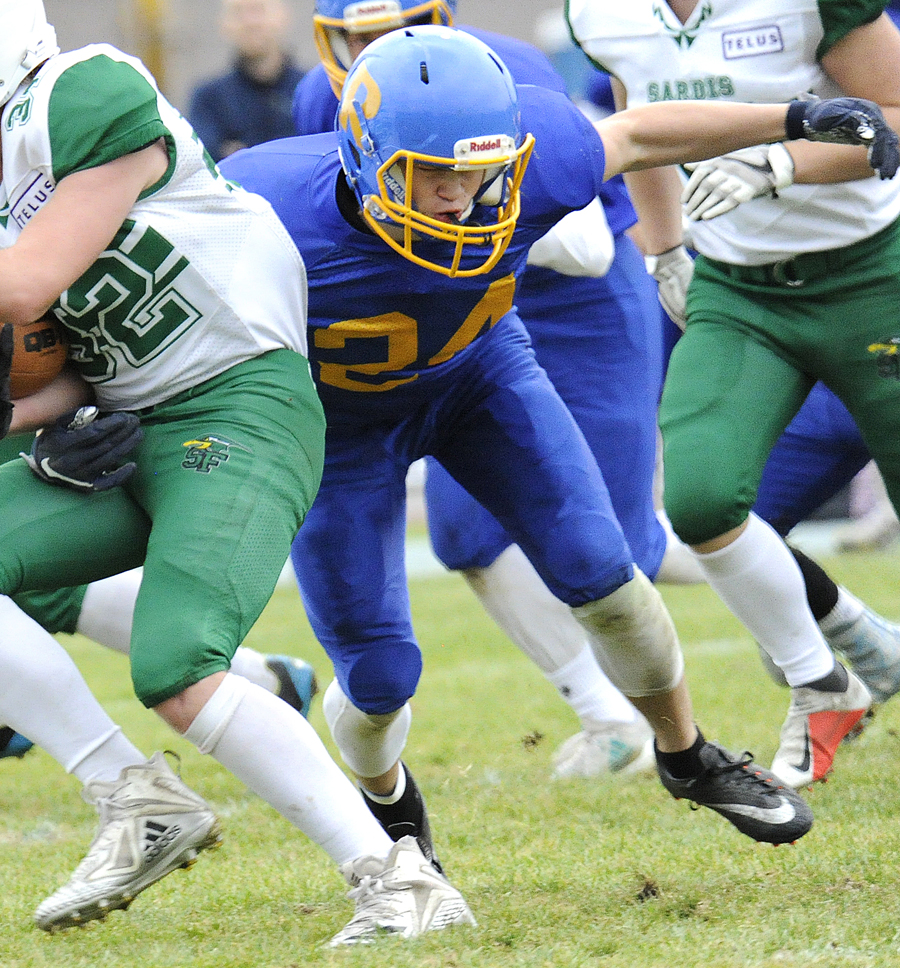 The Bears, with only four Grade 12s on the roster and a bright future in store, will add to a young roster on Friday, bringing up several players from their junior varsity team.

They’ll be thrown to the fire against a red-hot Voodoos offence that features Grade 12 running back, Jhavoun Blake, who rambled for 156 yards on 24 carries and for three touchdowns in Rutland’s 47-14 victory over the W.J. Mouat Hawks of Abbotsford last week. 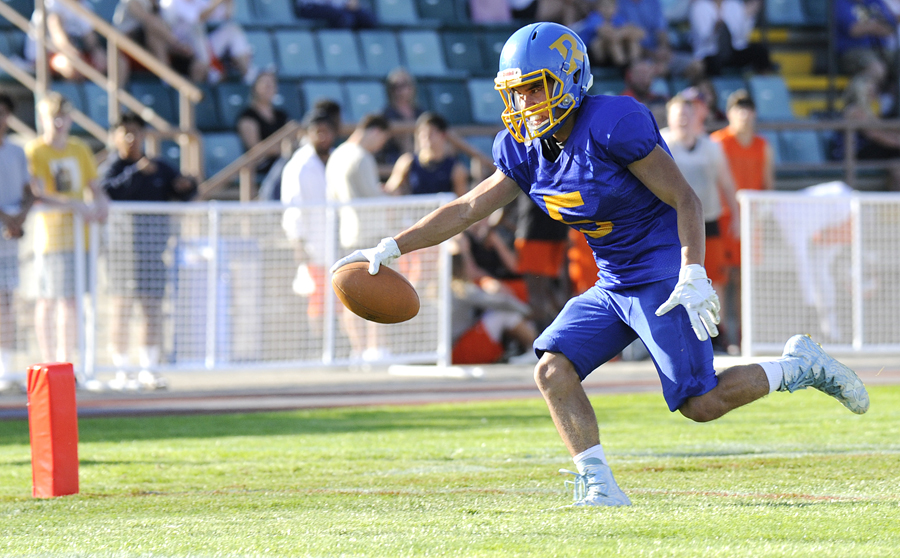 Blake added 32 yards on a pair of catches on throws from Liam Attwood, who completed 13 on 16 attempts for 258 yards. The Grade 11 quarterback also ran four times for 22 yards and a touchdown in the Voodoos’ first win in 19 years against Mouat.

Ryan Dovedoff was Attwood’s favourite target, hitting him five times for 128 yards and a TD that covered 81 yards, Kyron Konkin — back in the lineup after missing several games with an injury — caught four passes for 66 yards. Brad Koebel was on the receiving end of a 34-yard touchdown pass from Attwood. 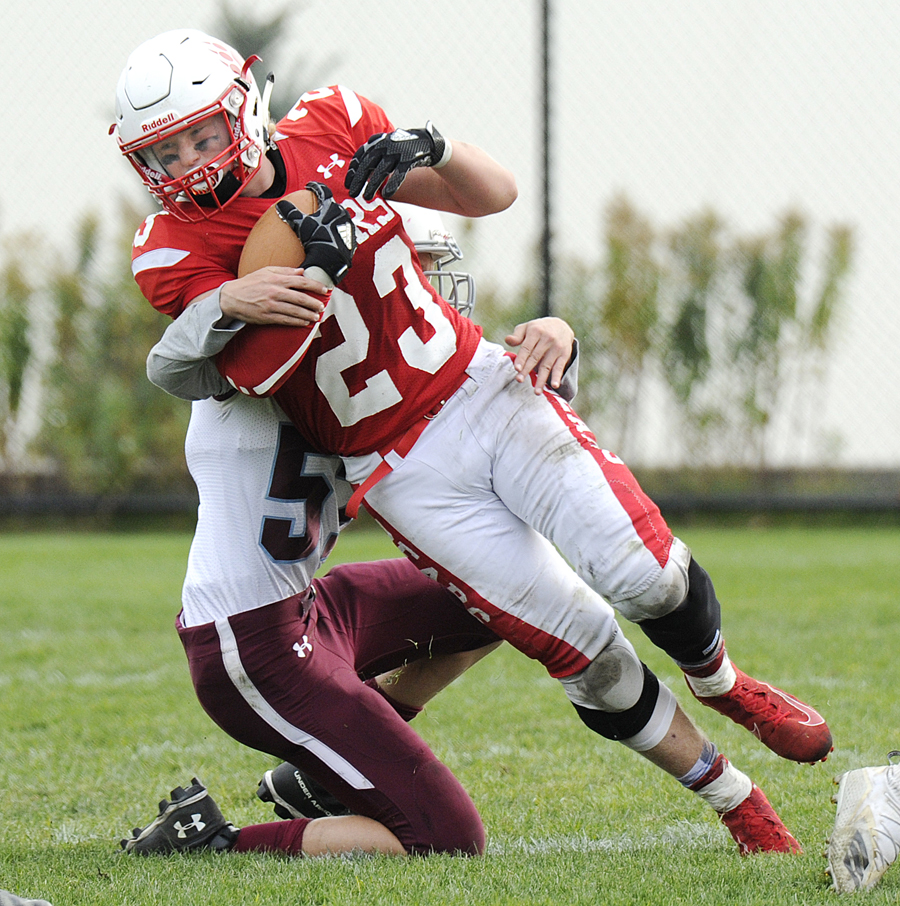 Defensively, the Voodoos were all over Mouat. Dovedoff continued to display his all-around prowess with eight tackles and a diving interception deep in the Rutland zone early in the game. Linebacker Kai Brydon added seven tackles, an interception and a fumble recovery while Shale Meadows and Blake finished the game with six tackles apiece.

Rutland captain, Garrett McCarthy (three tackles), the “heart and soul of the team” according to head coach Pete McCall, was a grinder both ways in the trenches despite being double-teamed most of the game. 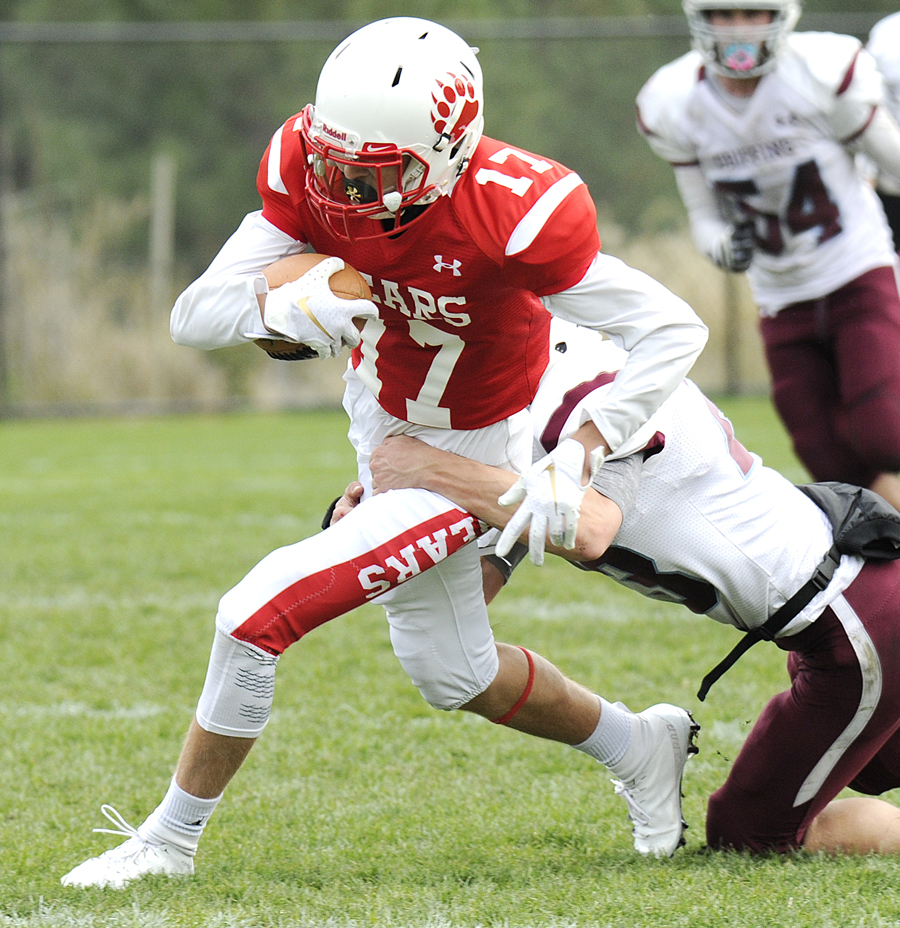 While the Voodoos and Bears will close out the regular season at home, the Kelowna Owls will be in Delta to play the Seaquam Seahawks (3-3) on Saturday for their final game before playoff action.

While plenty of possible post-season scenarios are in place in the AAA Eastern Conference, the Owls — tied for third place with Abbotsford with a 4-2 mark and guaranteed a playoff berth — can uncomplicate things in the standings by defeating the Seahawks. A win would earn Kelowna Secondary the right to host the first round of the playoffs on Nov. 9 at the CNC. 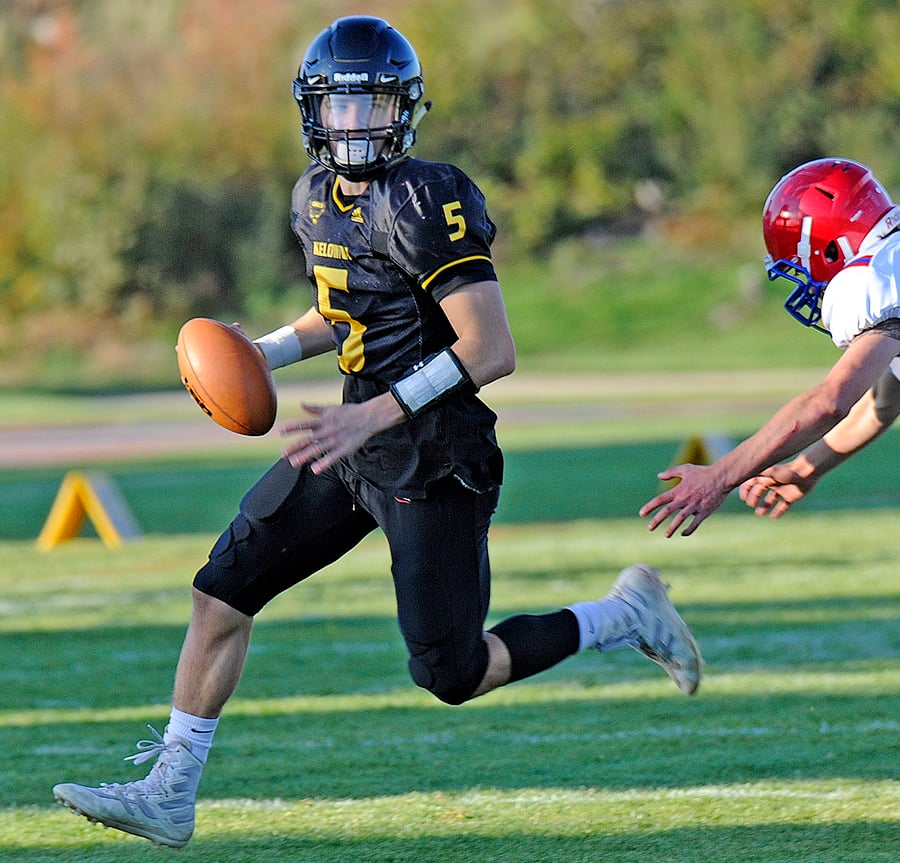 The Owls posted their first win over the Terry Fox Ravens for the first time in their history, winning 36-0 in Port Coquitlam last week.

Nathan Beauchemin completed 12 of 16 passes for 210 yards, three of which were for touchdowns, including two to Nolan Ulm, who finished with 88 yards receiving. Ulm also led the Owls with six tackles.

Still looking to establish more balance offensively and bolster their yardage along the ground, the Owls managed 94 yards, 58 of which came from Noah Gross, who scored a touchdown from 10 yards out. 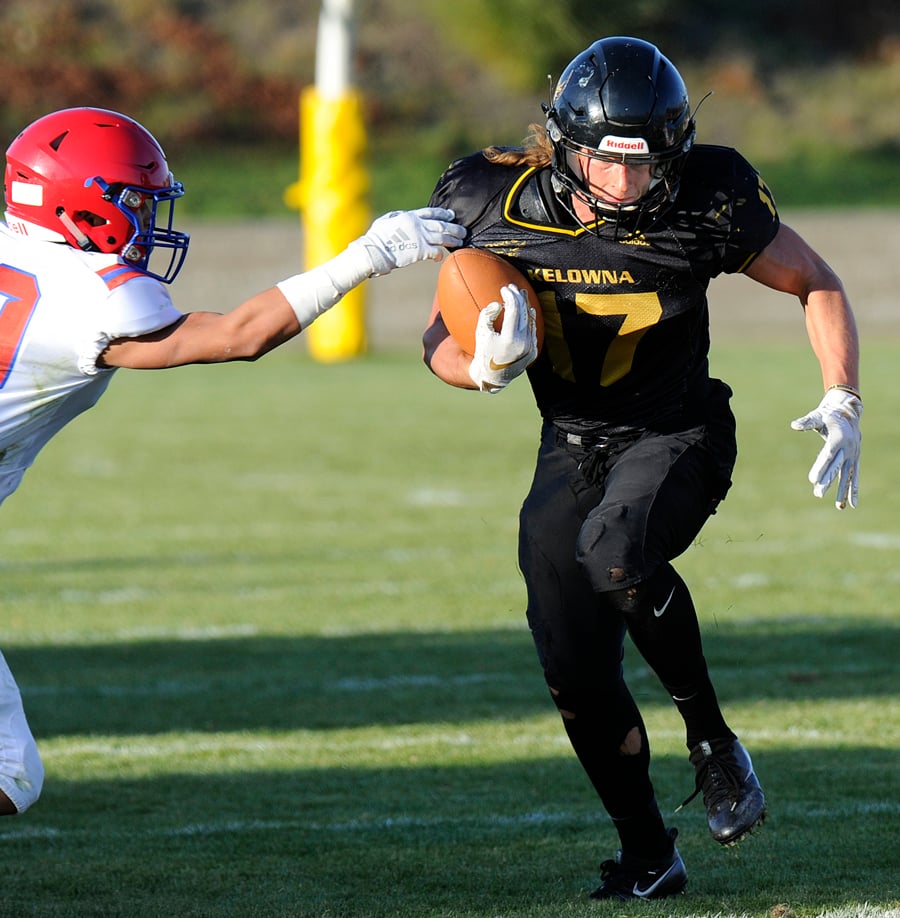