The league’s best defence withstood the challenge of a potent and respected offence and put an end to the Kelowna Owls’ run a B.C. Secondary Schools Football Association AAA championship.

Holding the Owls to just five yards rushing and a late touchdown pass, the Vancouver College College Fighting Irish cruised to a 35-7 Subway Bowl quarter-final win at BC Place on Saturday and are considered the favourites to win their fifth provincial title in their storied 90-year high school football history. 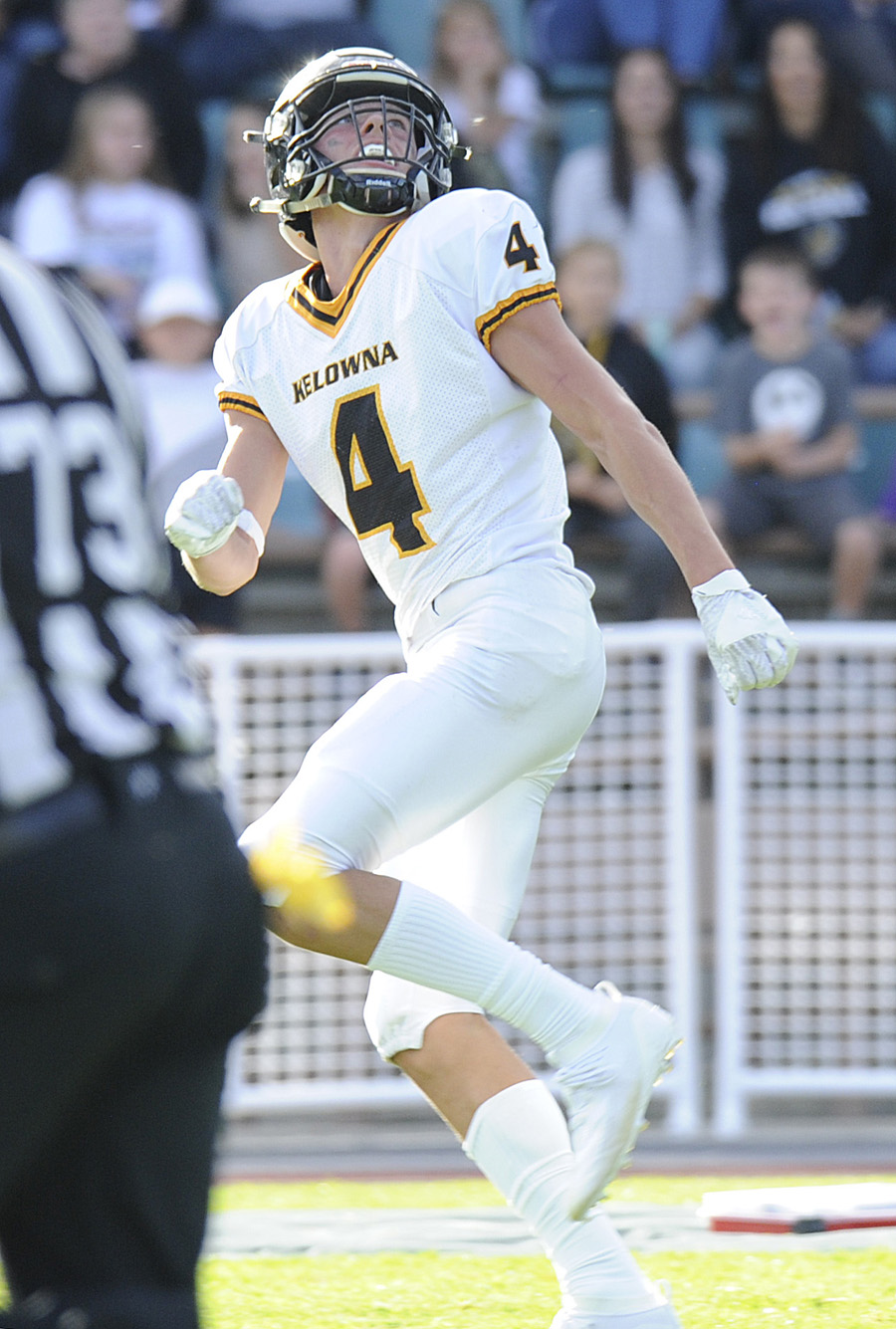 While both teams were well aware of each other’s considerable strengths going into their second meeting of 2019, it was only the Fighting Irish who were able to neutralize what they faced.

Featuring three BCSSFA all-stars in receivers Nolan Ulm and Caeleb Schlachter and Grade 11 player-of-the-year quarterback Nate Beauchemin, the Owls were indeed a force to be reckoned with on offence. Their 241 points in a 5-2 regular season made it no secret the Fighting Irish knew where their concentration was to be.

“That (Owls’ team) has a really good offence with a lot of scary weapons and sometimes maybe I spend too much time thinking of what they have,” Vancouver College coach Todd Bernett told Howard Tsumura of Varsity Letters after the game. “This week, I was really focused on Kelowna’s weapons . . . so it was nice to sit back and watch us handle it.” 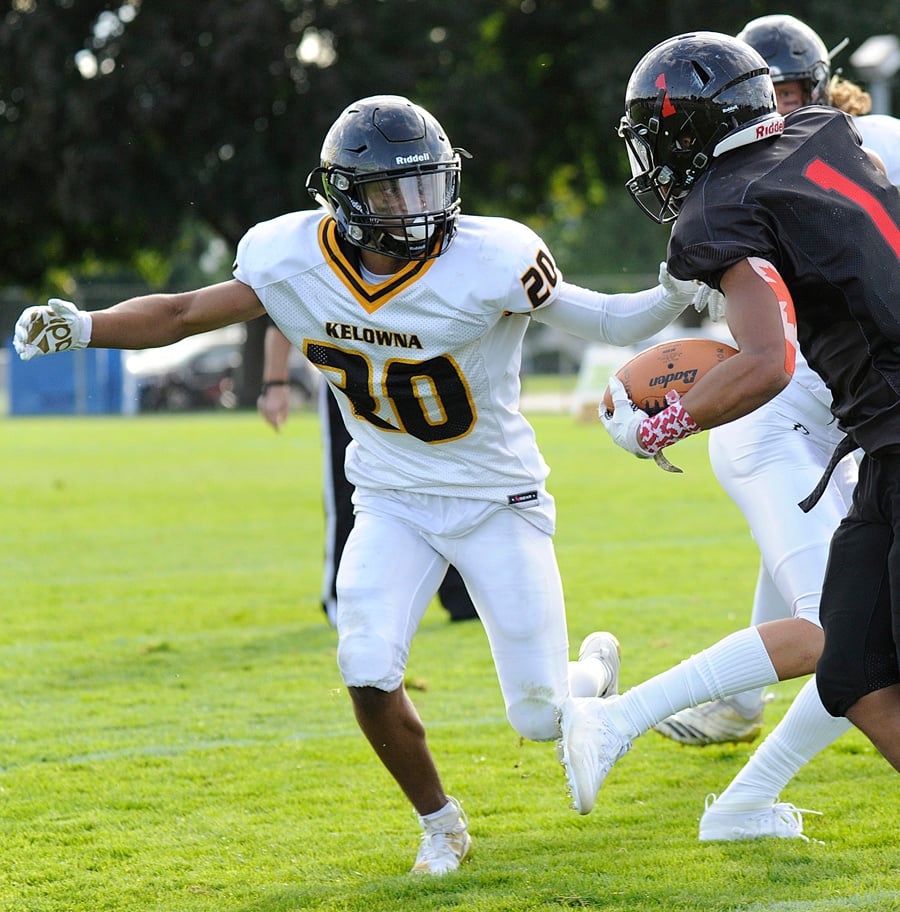 And handle it they did against an Owls team that had waltzed to the quarter-final matchup with a 62-21 win over the Carson Graham Eagles of North Vancouver a week earlier.

“They (Van College) are an outstanding football team which came out ready against us,” said Kelowna Secondary School head coach Chris Cartwright after two days of reflection. “We struggled to be consistent on both offence and defence.

“There were some great moments of success on our part, but we struggled to maintain momentum throughout the game on both sides of the ball.” 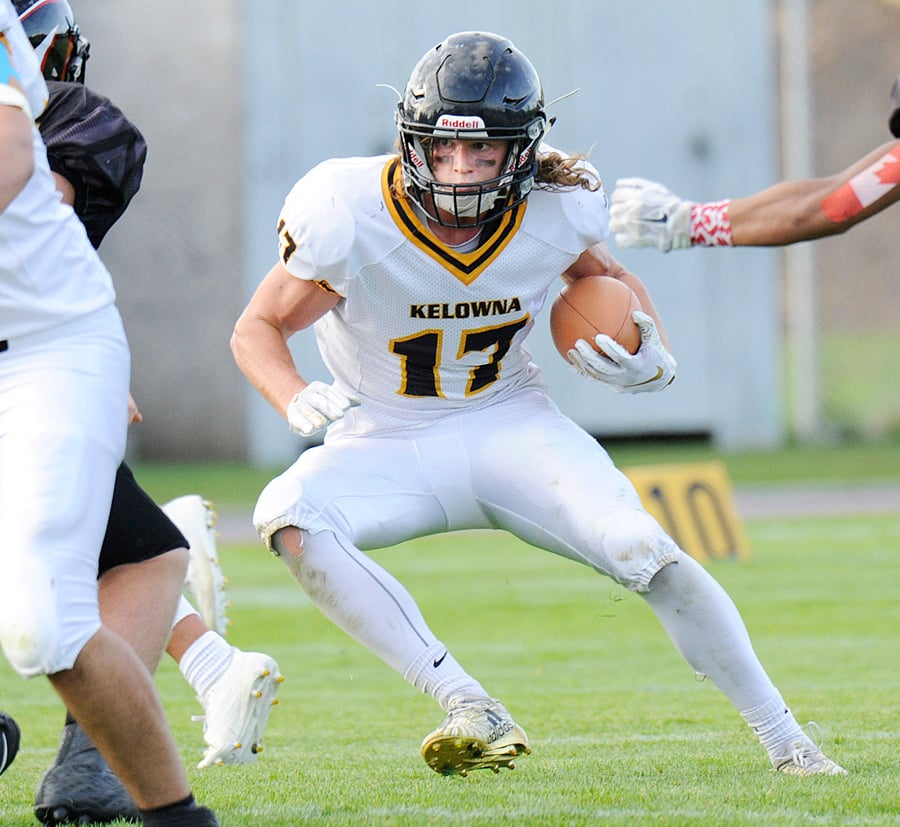 While Beauchemin, who will return to direct the Owls next season, completed 14 passes on 25 attempts, they added up to just 105 yards, 27 of those coming on the TD toss to Schlachter with the result of the game already decided by the dominant Fighting Irish defence.

“I would have to spotlight our entire defensive line,” said Bernett. “There were multiple pressures, and the pressure from a four-man pass-rush was tremendous.” 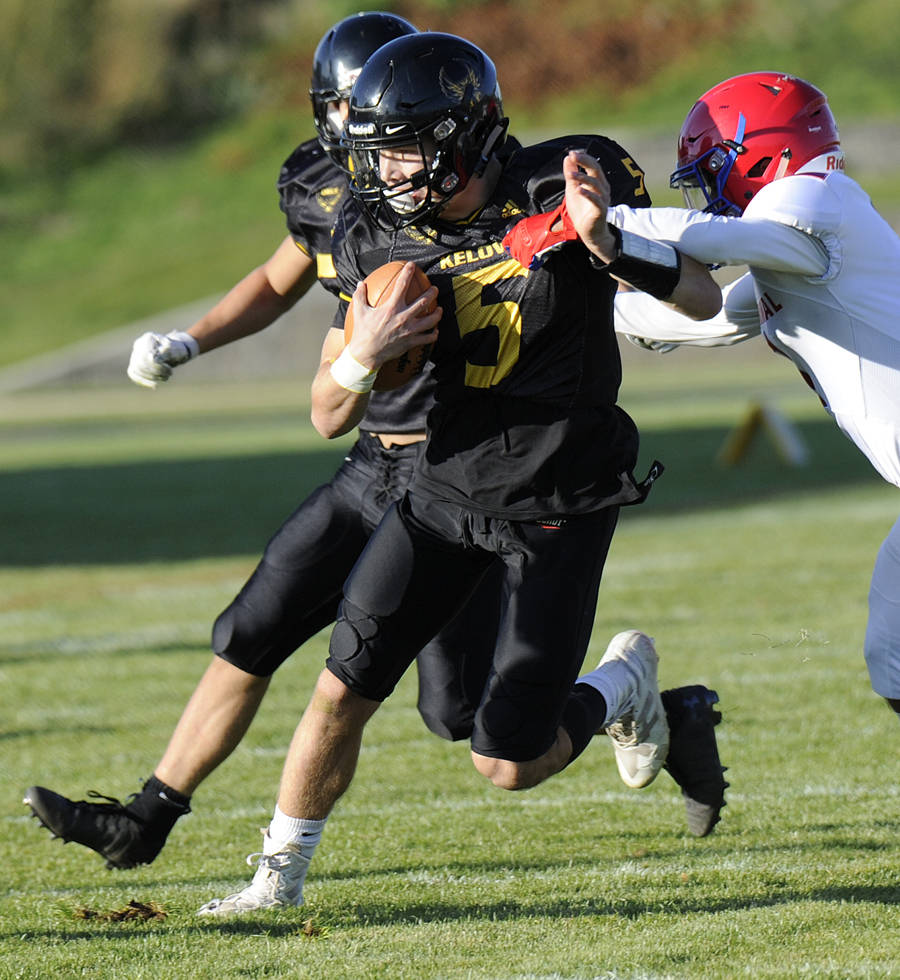 The Owls’ Isaac Athans, playing his final game with the Owls, went out in style by leading the team in tackles with 12.5. Ulm, also suiting up for the last time with the Black and Gold, finished with 5.5. tackles as did Tariq Brown, a Grade 11 and BCSSFA all-star linebacker.

In all, 11 of the Owls are graduating in 2020 and coach Cartwright said the thought of them not being back is emotional for him and the coaching staff.

“My heart goes out to our senior players. Those guys have been a part of this process since 2016. They have left a legacy that will be remembered forever here in our program. 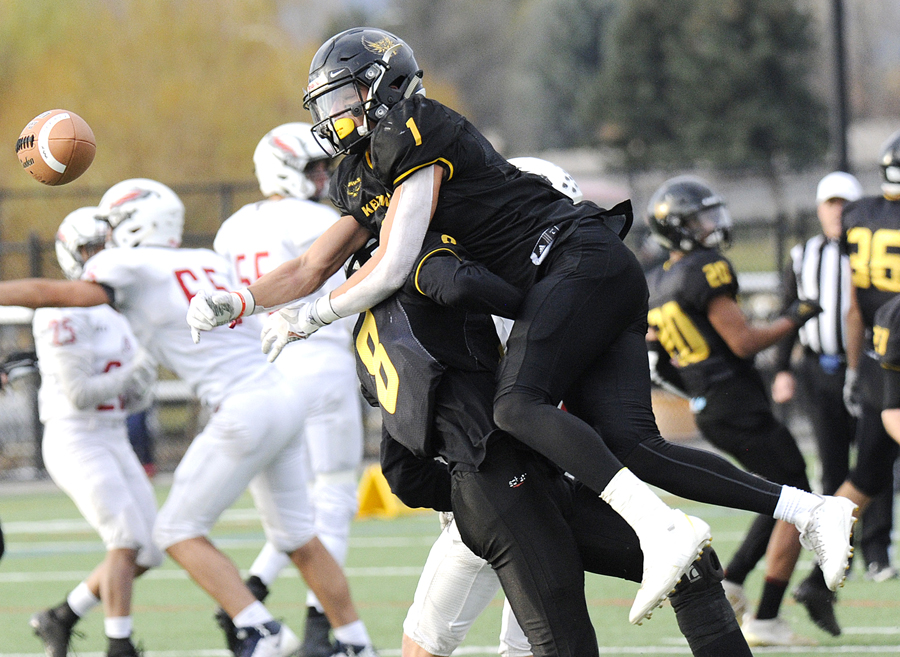 “They are an outstanding group of young men who have a bright future, whether they continue to play football or whatever they choose to do after high school.

“We’re so very proud of them as people and what they have accomplished while playing for KSS.”

Cartwright added that the season “obviously didn’t finish the way we wanted” but it was still an outstanding team effort.

“The growth we saw throughout the season and how the players and coaches conducted ourselves every week to prepare was phenomenal,” he said. “This is one of the best all-round teams we’d had at KSS and it’s amazing to see what we have built over the past four years.”

Meanwhile, all-stars Schlachter, Ulm and Brown have been invited to play in the BCSSFA all-star game at BC Place on Nov. 30, just prior to the AA and AAA provincial championship games.

The AAA finalists will be decided on Saturday. Vancouver College takes on the St. Thomas More Knights of Burnaby in one semifinal beginning at 7:30 p.m. at BC Place while the Notre Dame Jugglers of Vancouver meet the Lord Tweedsmuir Panthers of Surrey in the other starting at 5 p.m.

A 14-7 loss to the Lord Tweedsmuir Panthers in provincial junior varsity quarter-final play did little to quash the enthusiasm in the Kelowna Owls’ football camp. 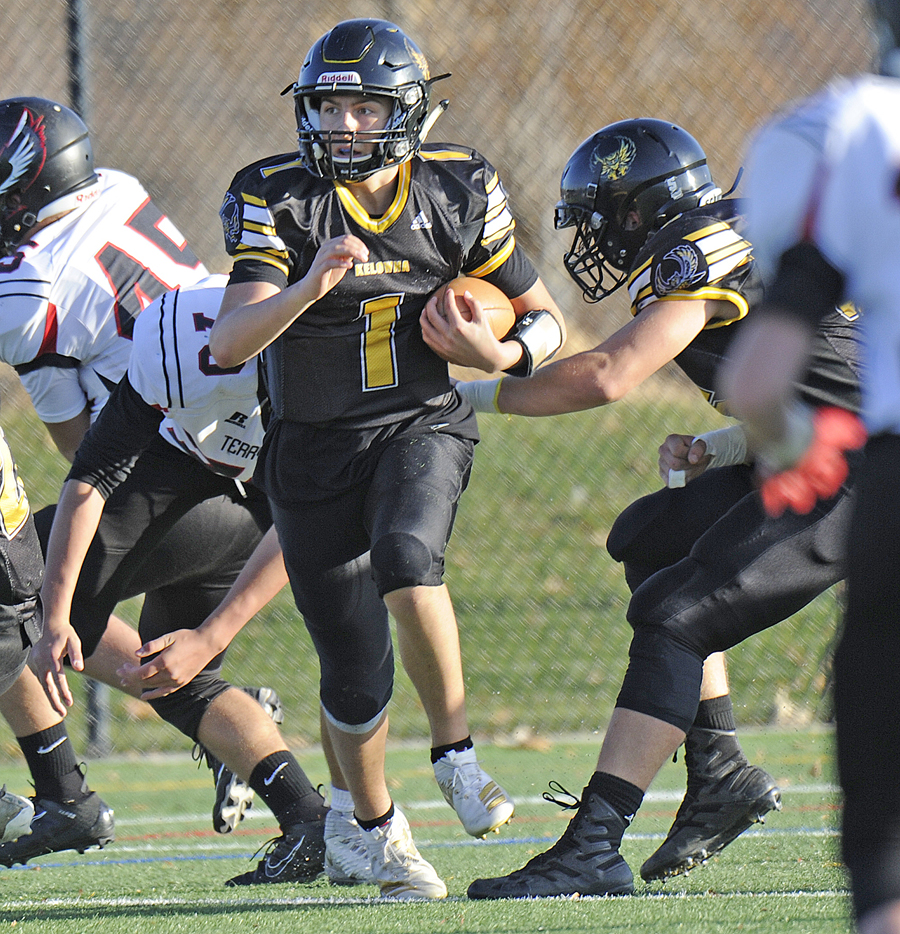 In defensive battle that saw them go toe-to-toe with the Lower Mainland powerhouse and with a chance to win right to the final flag wave, the junior Owls proved they will be a formidable complement to the senior team next season.

“It was a very disappointing loss in the sense we had an opportunity (to win) but just couldn’t finish,” said KSS head coach Mike Irvine. “While Tweedsmuir played very well defensively, we also hurt ourselves with our own mistakes and untimely penalties (two interceptions and two fumbles). We took ourselves out of scoring position too many times.” 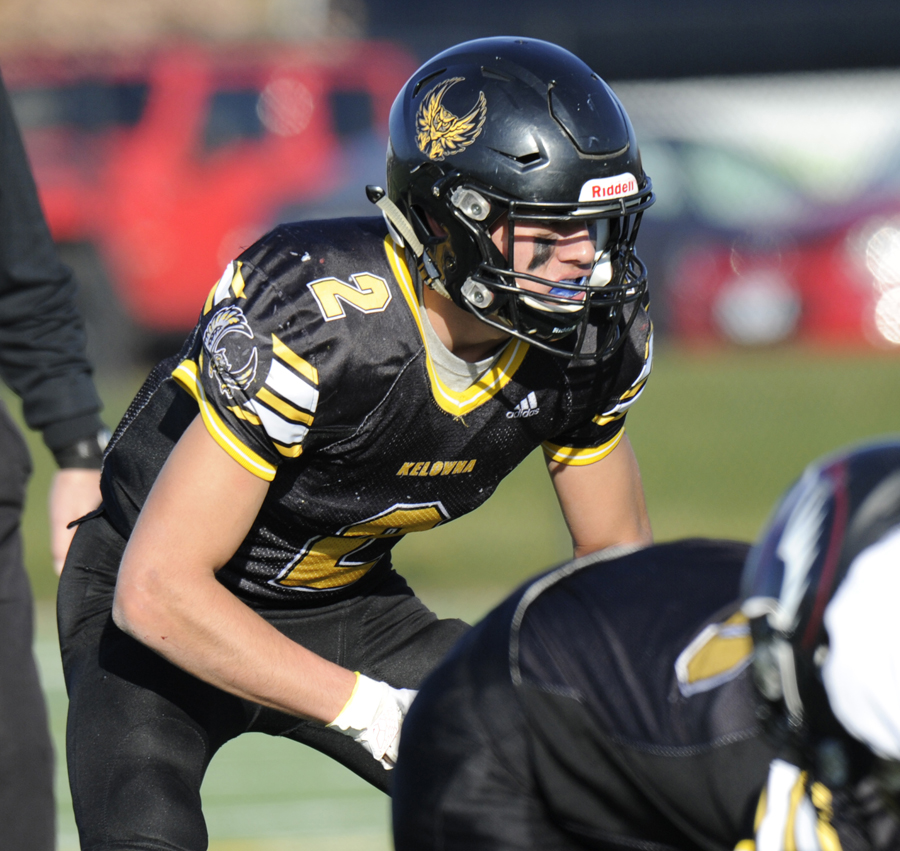 The Owls’ only scoring play came on a long pass from quarterback Jaeke Schlachter to Kyan Brown while running backs Everett Schmuland, Jack Nyrose and Ethan Irvine also moved the ball fairly well, but couldn’t penetrate the stubborn Panthers defence enough to put enough points on the board.

Meanwhile, Schmuland, Evan Fitchett and Jacob Wojohowski spearheaded an Owls’ defence that held the usually potent Tweedsmuir offence to a touchdown early in the first quarter and kept them off the board until the fourth. 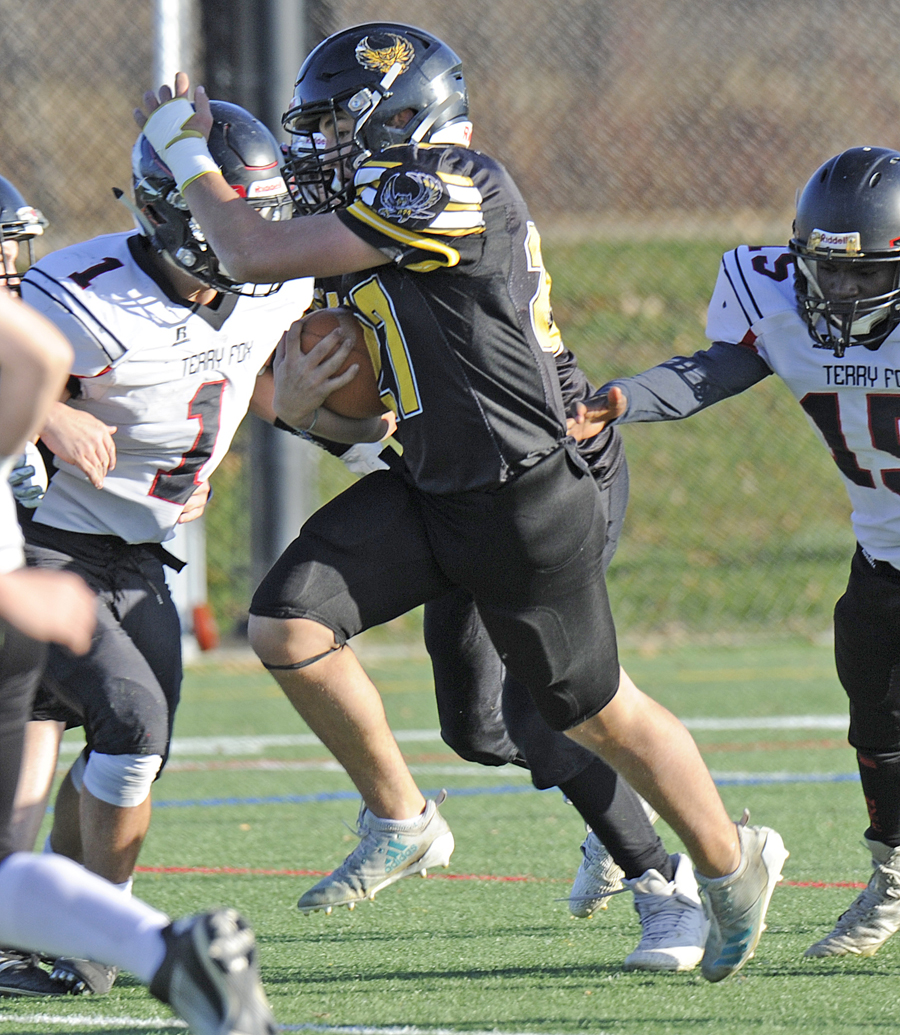 “Overall, we’re very proud of the way the boys battled,” said Irvine. “They fought through adversity and challenged the Panthers right to the end. The kids stepped up and left it all on the field.

“I have no doubt this group of young players has a great future in the KSS program. It’s been a pleasure to coach a group like this and I’m sure it will be the same for senior coaches as well.” 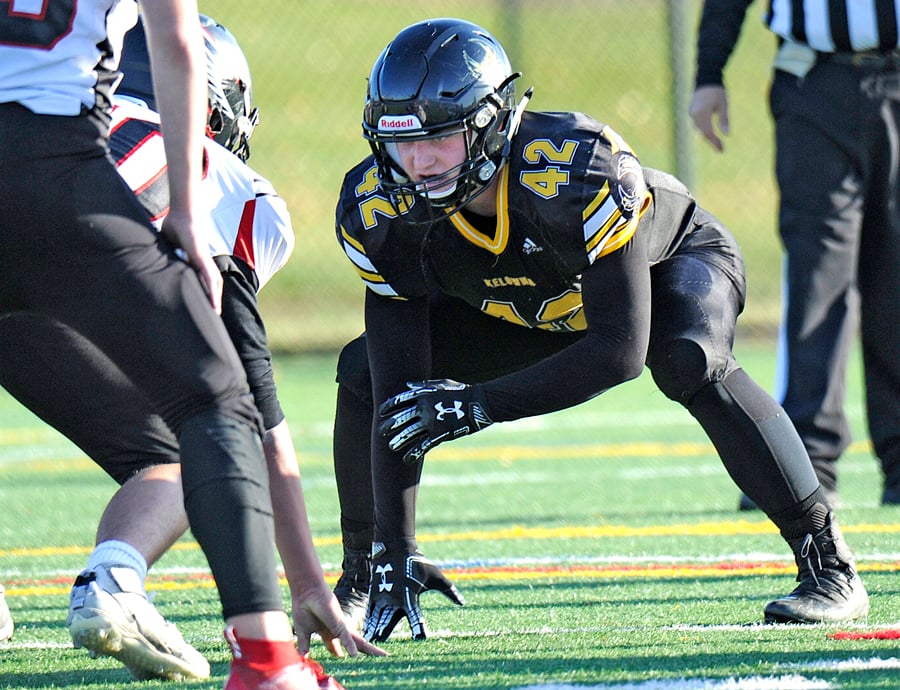 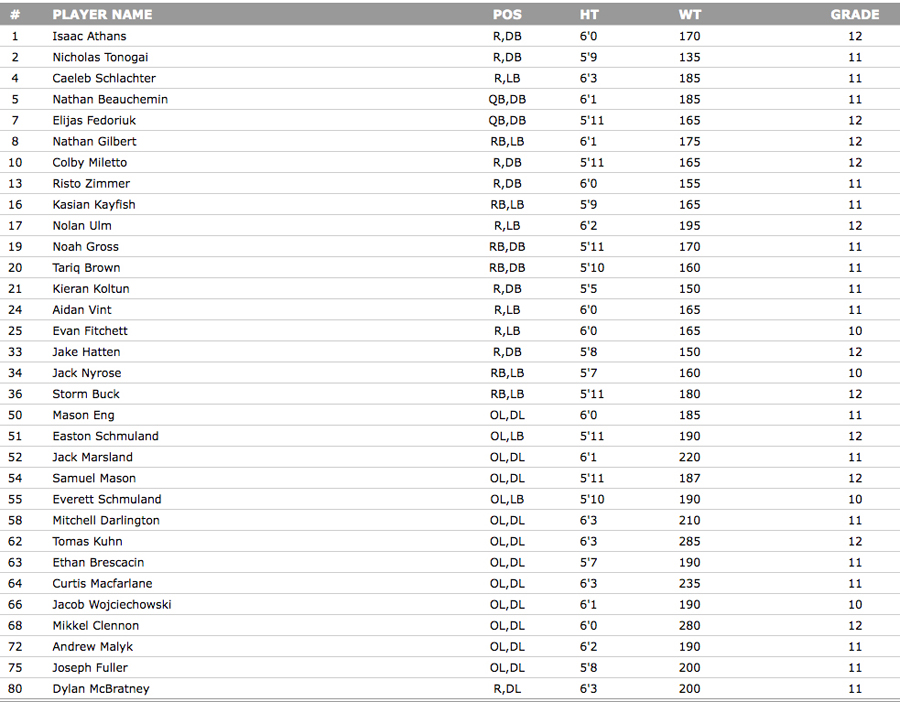 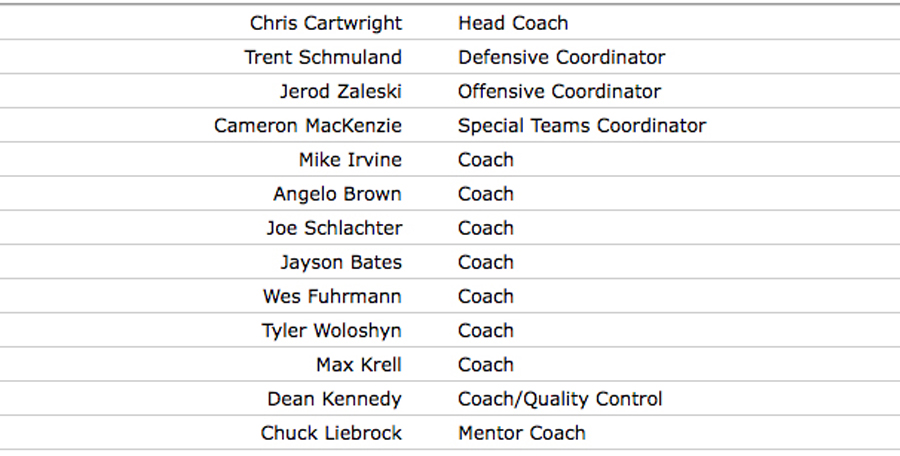