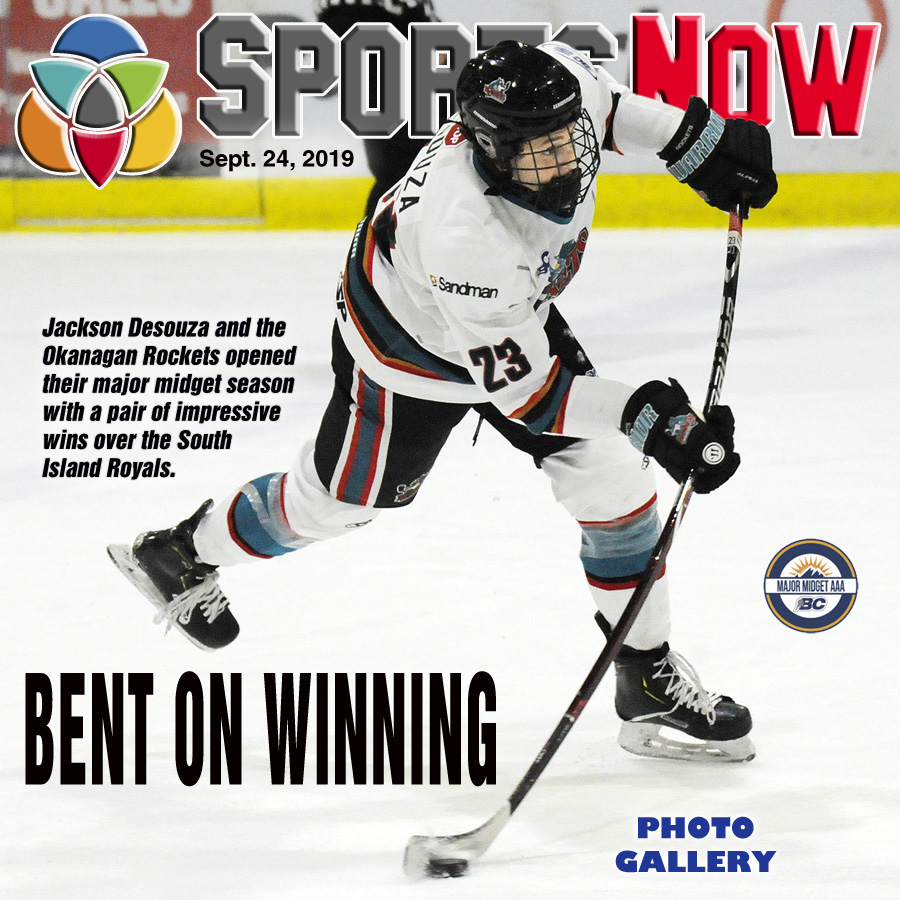 There were a lot of things to like about the Okanagan Rockets’ pair of dominating performances to open the 2019-20 season at the CNC.

For starters, the Kelowna-based BC Hockey Major Midget League teams handled the visiting South Island Royals 5-2 and 6-2 on Saturday and Sunday respectively. And the depth came through as 10 different players shared the scoring over the two days. 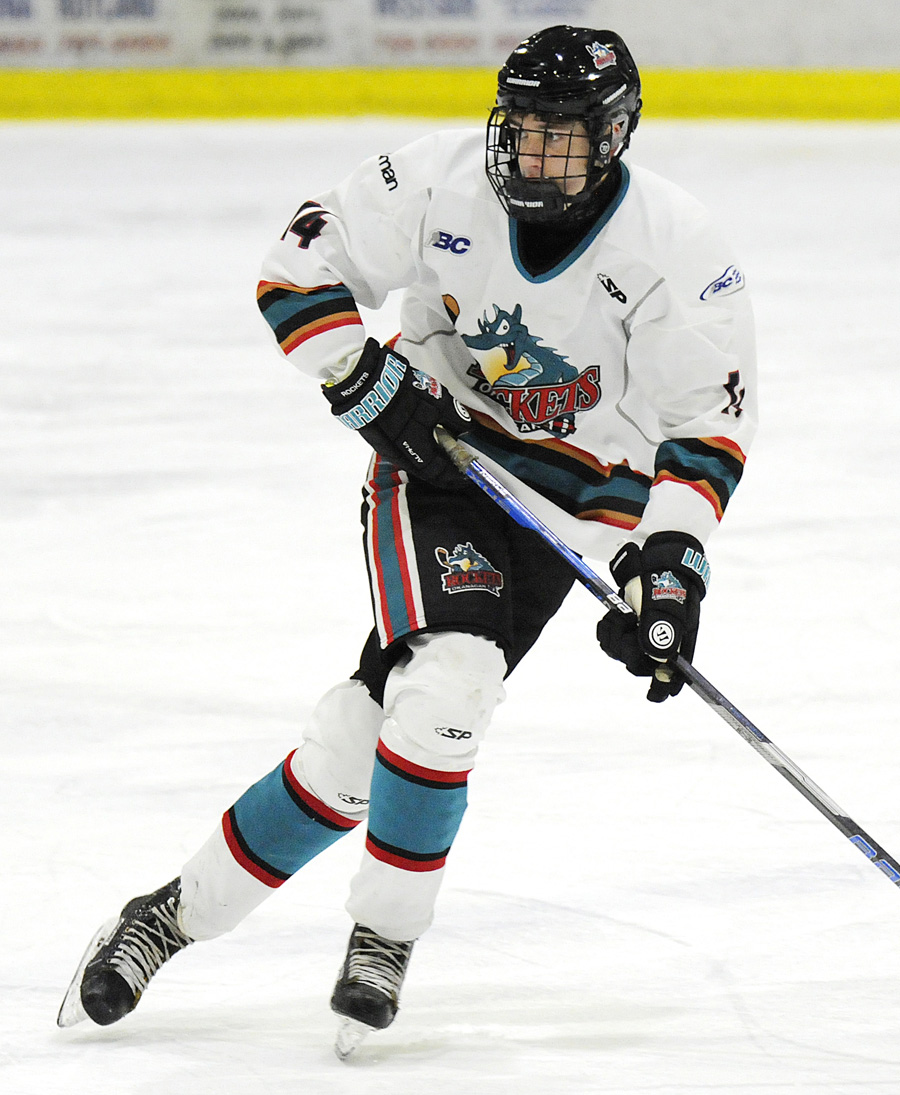 In both games the Rockets skated out of the gate quickly and built up healthy leads while they held the territorial edge most of the way. They also outshot the Victoria-based opposition 89-42.

And of course, the Valley-wide representatives in the top Hockey BC midget (15- to 17-year-olds) league in the province picked up the four points they were expected to pocket against a team tagged to be among the also-rans this season. 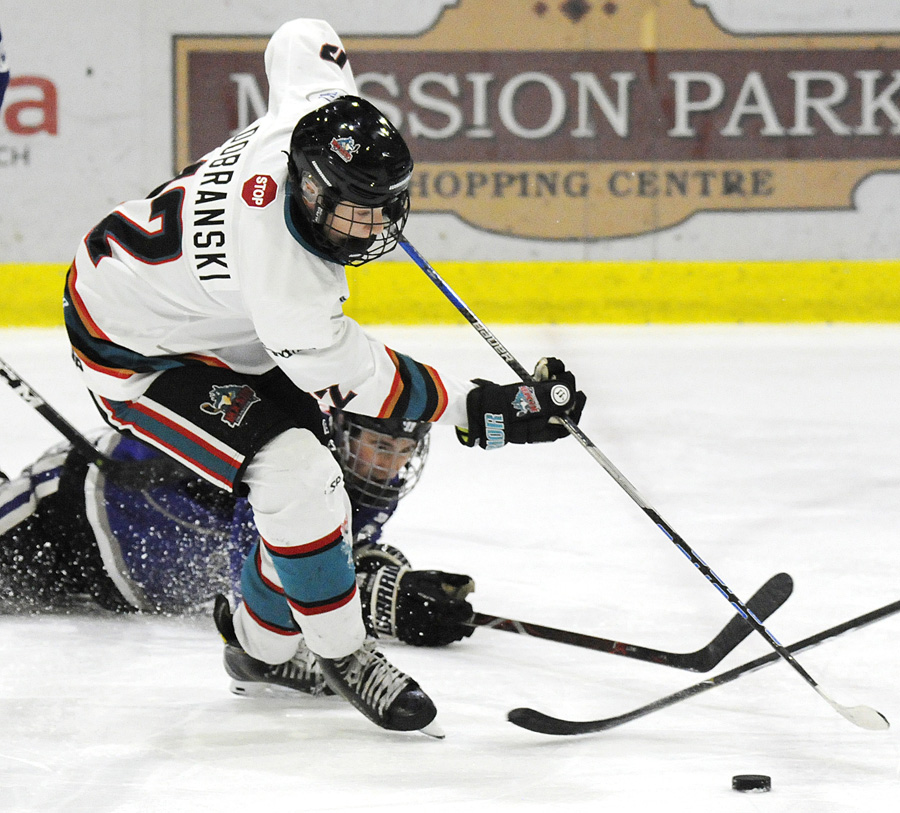 Rockets’ head coach Simon Ferguson was duly impressed. But like most mentors standing behind the bench of hockey-teething teenagers in September, he couldn’t help pointing out the pesky blemishes in an otherwise smooth debut.

“For sure, we’re happy with the four points and much of what we saw in the two games, but I think the coaches and the players know we can do better,” said Ferguson, beginning his third season with the OK Rockets. “The fast starts were good . . . the only downside there was that we were lulled into some bad habits later on. Too many times guys were trying to get on the highlight reel instead of making the right play.” 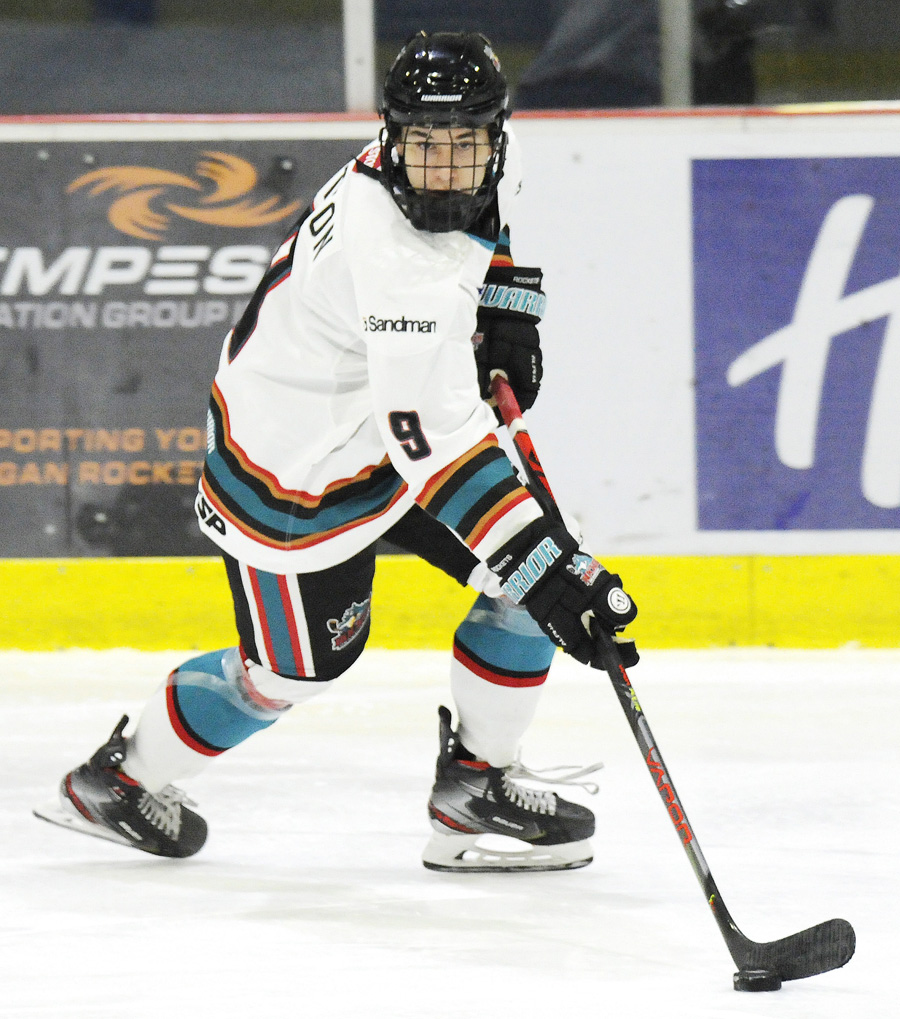 Ferguson added that the two games confirmed his young team, made up mostly first-year major midget players, can put the puck in the net with regularity and that all four lines are capable of contributing. His concern is that they do it by working together as a team and not as individuals.

Defensively, the Rockets got a stellar performance from a blueline corps, touted as one of the best in the league this season. It was led by 17-year-old Cameron Moger of Vernon, who as well as being responsible in his own end, complemented the offence with a goal and three assists in the two games. 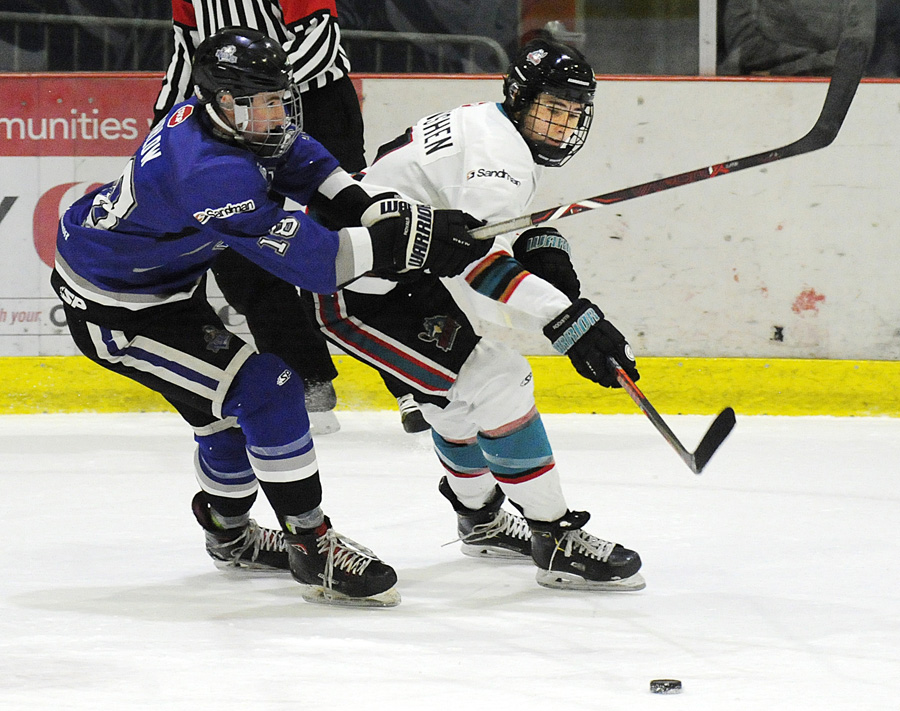 But while the defence and the goaltending of Cayden Hamming (Saturday) and Bailey Monteith (Sunday) were solid, Ferguson felt his team gave the Royals too many quality chances.

“There’s a lot of stuff we have to clean up,” he pointed out. “There were too many times we were trying to create one-on-one plays in our zone instead of just moving up the puck — keeping things simple. At one point in the first game, we gave up six quality chances in the red zone. If we were playing one of the better teams, we would have been in a lot more trouble.” 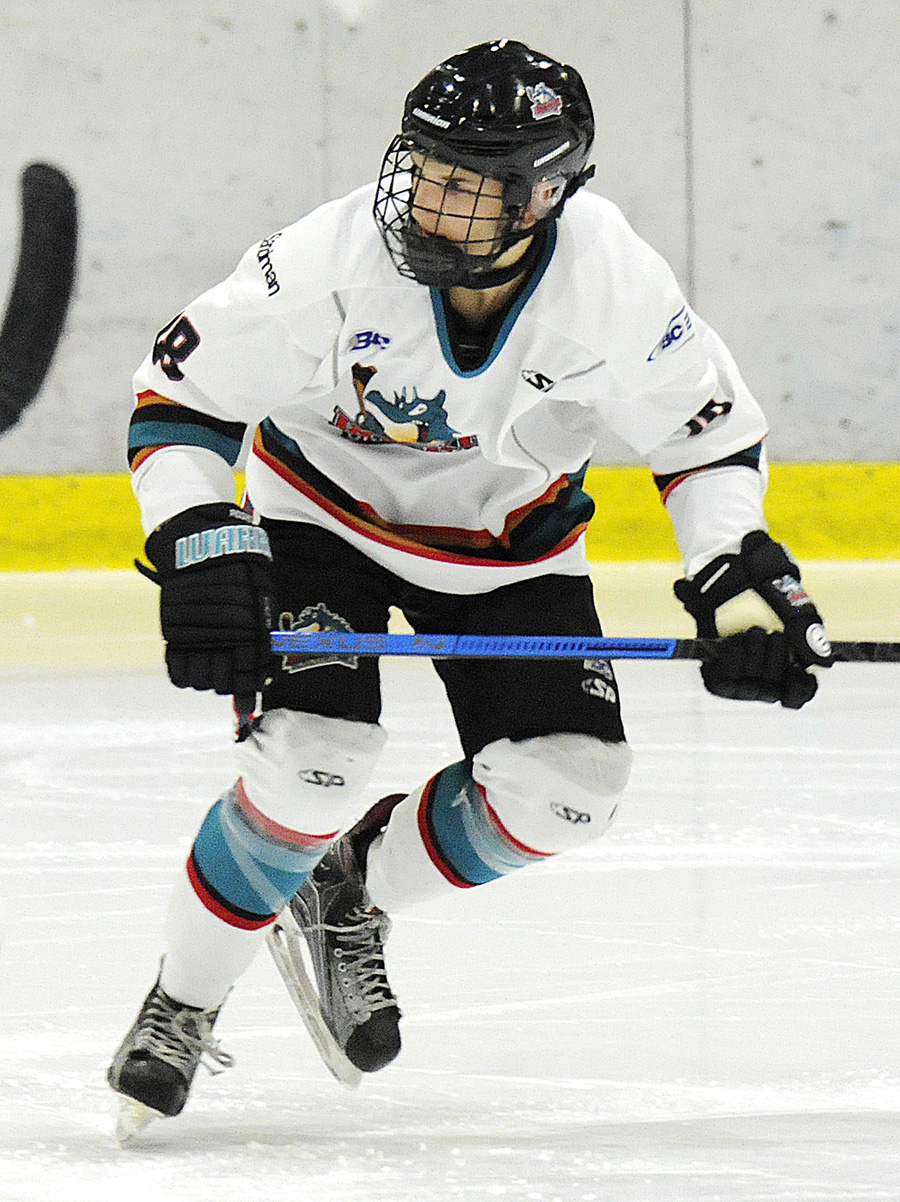 Three goals in the first five minutes of Saturday’s season debut assured the Rockets had the upper hand early and negated any defensive lapses against South Island.

Dylan Wightman, Jace Weir and Moger staked the Rockets to a 3-0 lead while Teague Patton of Kelowna showed why the Medicine Hat Tigers of the Western Hockey League were anxious to sign him this summer. The 15-year-old, playing in his second season with the Rockets, assisted on all three goals. 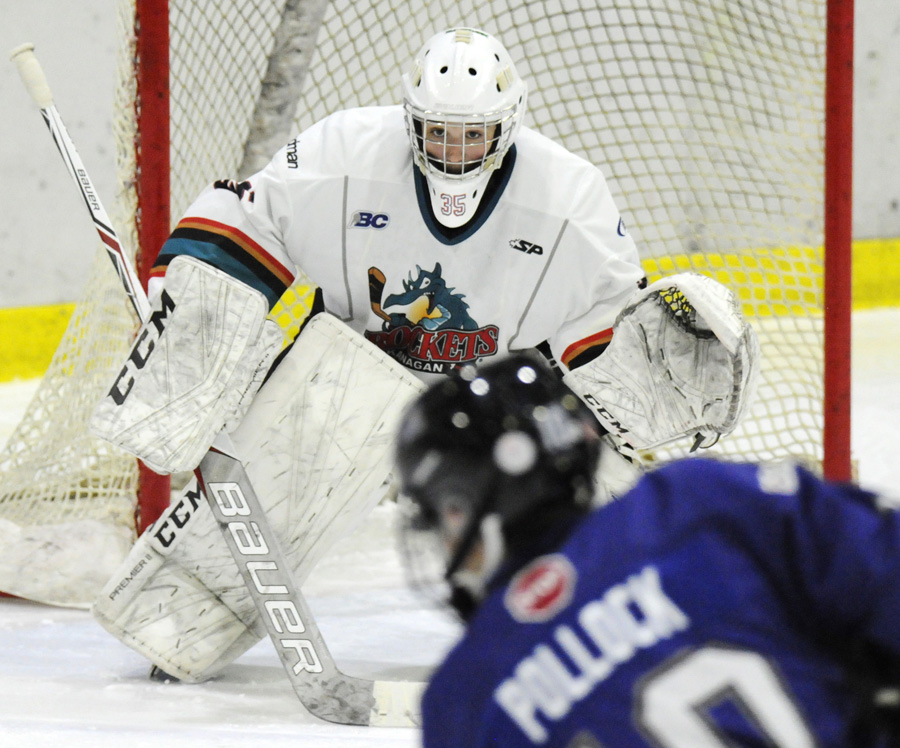 The Rockets went up by four on Riley Sharun’s first major midget goal while Coletyn Boyarski notched the hosts’ fifth goal in the second period. From there on the Royals hushed the Rockets into near mediocrity.

While the Rockets were held to a power play goal by Patton in the first period of Sunday’s game, they broke loose again midway in the second with three goals in a five-minute span — by Connor Elliott, Benn Krivoshen and Boyarski to go up 4-1 entering the third. Rilen Kovacevic and 15-year-old defenceman Tyson Jugnauth closed out the scoring in the third. 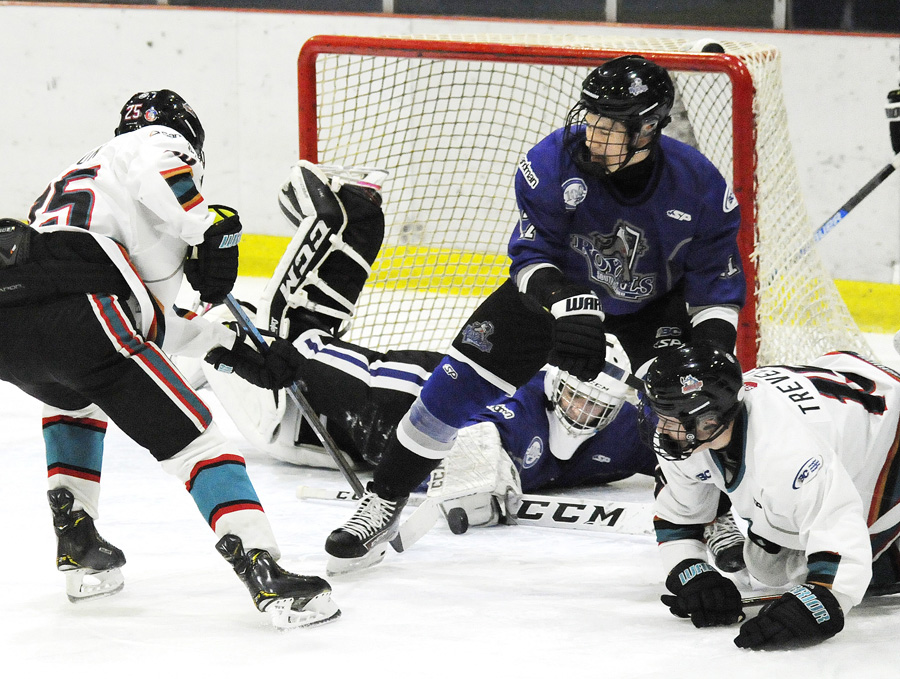 Hitting the road for the first time in the regular season this weekend, the Rockets will be Trail for a pair of games against the Kootenay Ice, who split their two opening games with the North Island Silvertips.

The Ice, a perennial underdog, underlined Ferguson’s assertion that no team can be taken for granted in the BCHMML. Kootenay dropped a 6-1 decision to the Silvertips on Saturday but came back to record a 5-2 win in Nanaimo on Sunday.

“We’ve got to be ready each and every game,” said Ferguson. “So we have to focus this week on attacking the zone, going into the hard areas and playing as a team for a full 60 minutes.”