OK Rockets look for more consistency despite sweep of Blazers 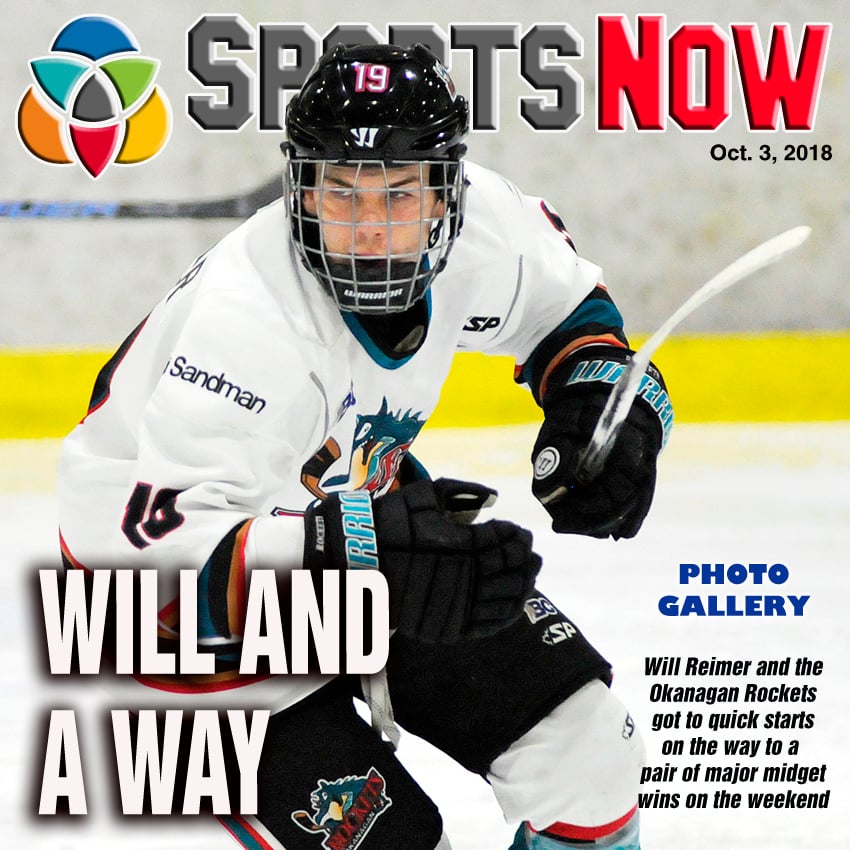 While the Okanagan Rockets moved up in the B.C. Major Midget Hockey League standings with a pair of wins over the Thompson Blazers on the weekend, at times it was one step forward and one step back for the Kelowna-based team. 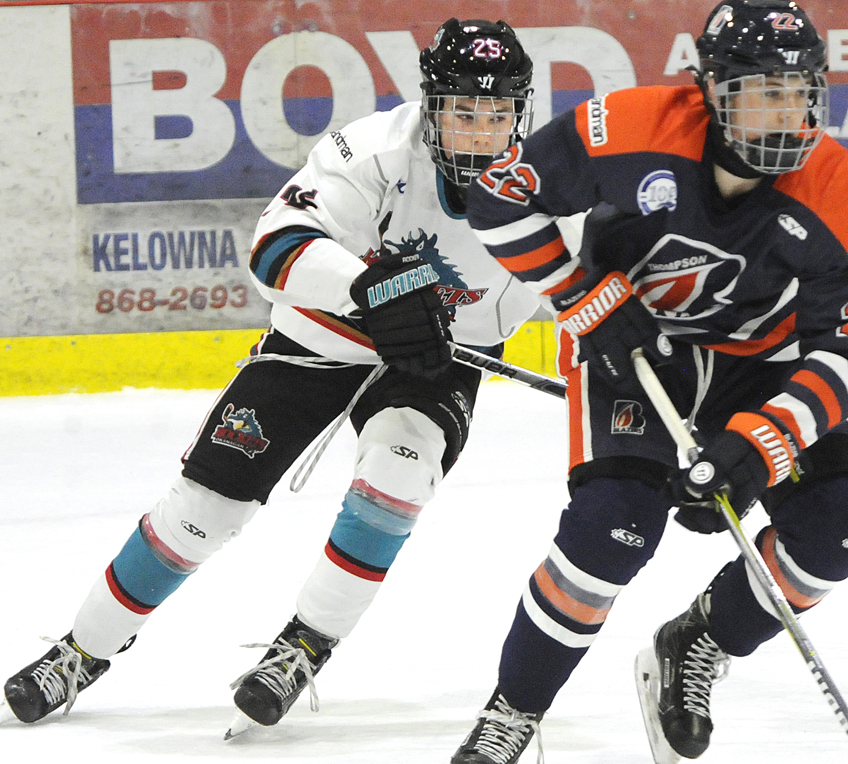 Heeding the counsel of head coach Simon Ferguson after an 8-4 loss to the Greater Vancouver Canadians a week earlier in which they got off to a slow start and never recovered, the Rockets charged out of the gate by scoring three goals in the first period of both games. against the Blazers. They went on to a 5-2 win on Saturday in Kamloops and doubled the Blazers 6-3 on Sunday at the CNC.

But in the two games, the Rockets came up empty in the second period before regaining their mojo in the third and claiming the two points. 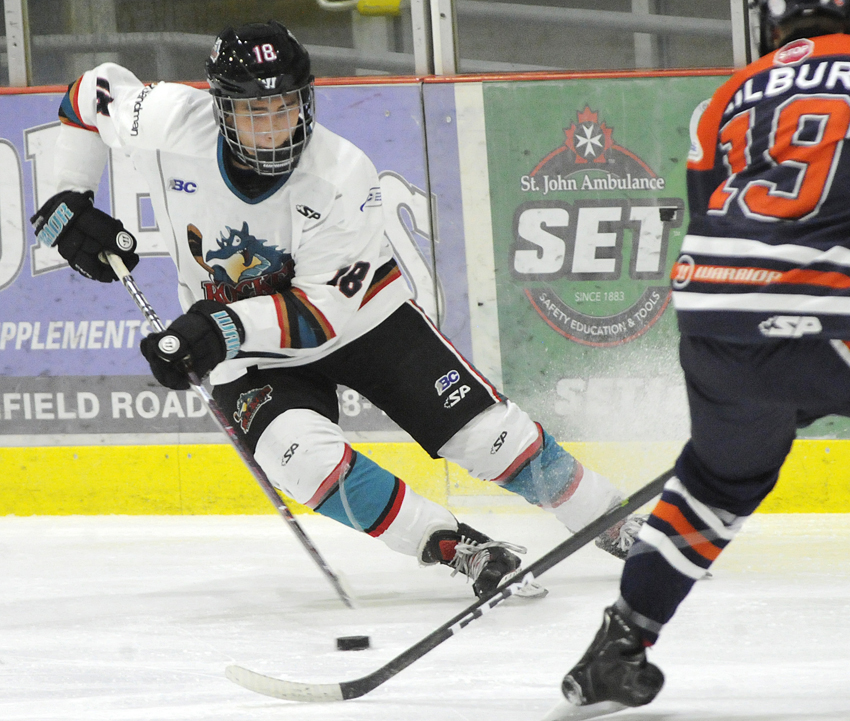 “I think there is just a little bit of a learning curve that our guys are going through in regards to playing a complete 60-minute game.,” said Ferguson. “When we get up by a couple goals we tend to let our foot off the pedal and allow the other team to play their game. But we liked our start in both games and the way we found a way to get it done . . . although it wasn’t pretty a times.”

Ferguson conceded that his team, now 3-1 on the young season, was fortunate to come away with two wins.

“We felt we got maybe more of the bounces over the weekend and capitalized at the right time,” he said. “Things could have easily gone the other way because we didn’t play a full 60 in either game.” 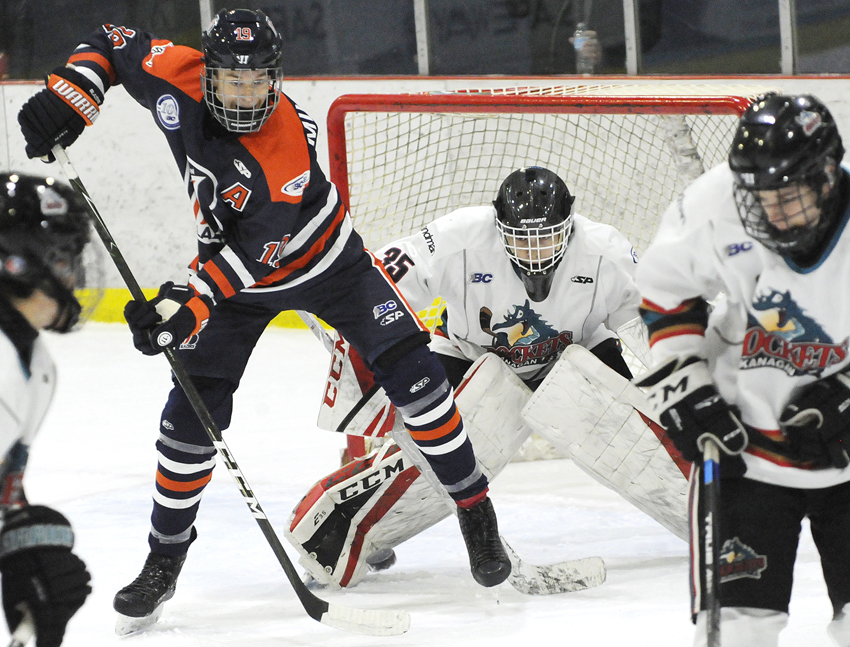 Still, the Rockets got another well-balanced effort up front despite Ferguson and the coaching staff having to mix up the lines due to injuries and four players being called up.

In the opener in Kamloops, Chase Dafoe, a 16-year-old graduate of the Okanagan Hockey Academy in Penticton, now in his second tour with the Rockets, scored his first two goals of the season and assisted on a third-period tally by fellow returnee, Benn Krivoshen. The son of former NHLer, Byron Dafoe, he also assisted on a pair of goals in Sunday’s win. 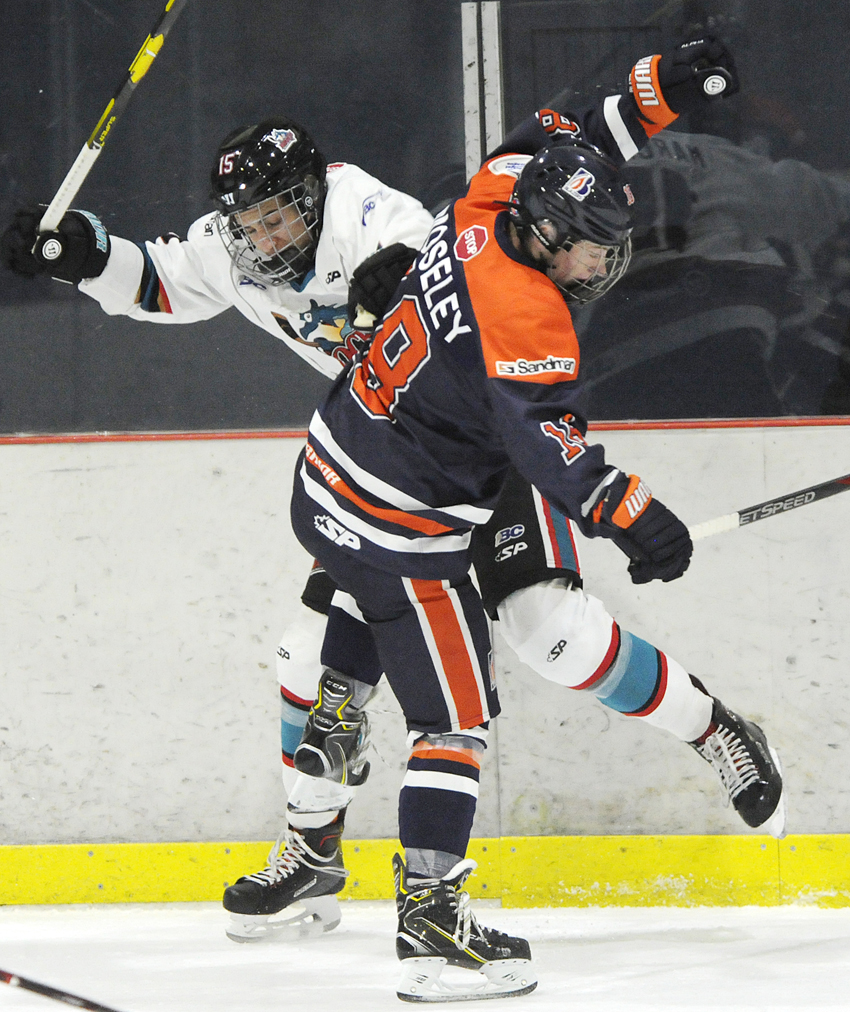 “Chase has been a workhorse for us,” said Ferguson. “He’s been up and down in the lineup and playing in different positions, but he continues to get it done regardless of where we slot him in.”

Will Reimer, one of only three returnees from last year’s team, sparked the Okanagan attack on Saturday with his third goal of the season while Kelowna minor hockey product, Teague Patton, one of the call-ups, rounded out the scoring with the third Rockets’ goal in the first period. 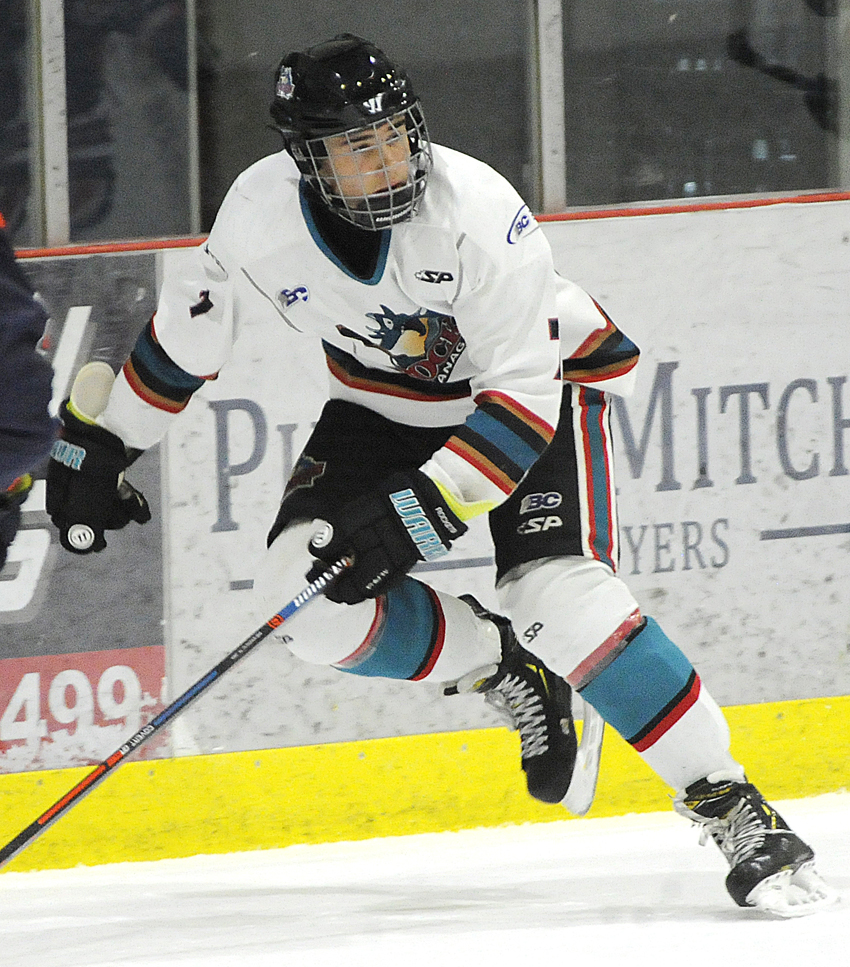 At home on Sunday, Colby Elmer, another KMHA grad, scored his team-leading fourth and fifth goals of the season and assisted on Reimer’s second of the weekend.

Ferguson has been impressed with the pair’s chemistry.

“They clicked in four exhibition games, so we’ve tried to keep them together,” he pointed out. “Both players work hard, have good skill and seem to find the right areas of the ice from which to score.” 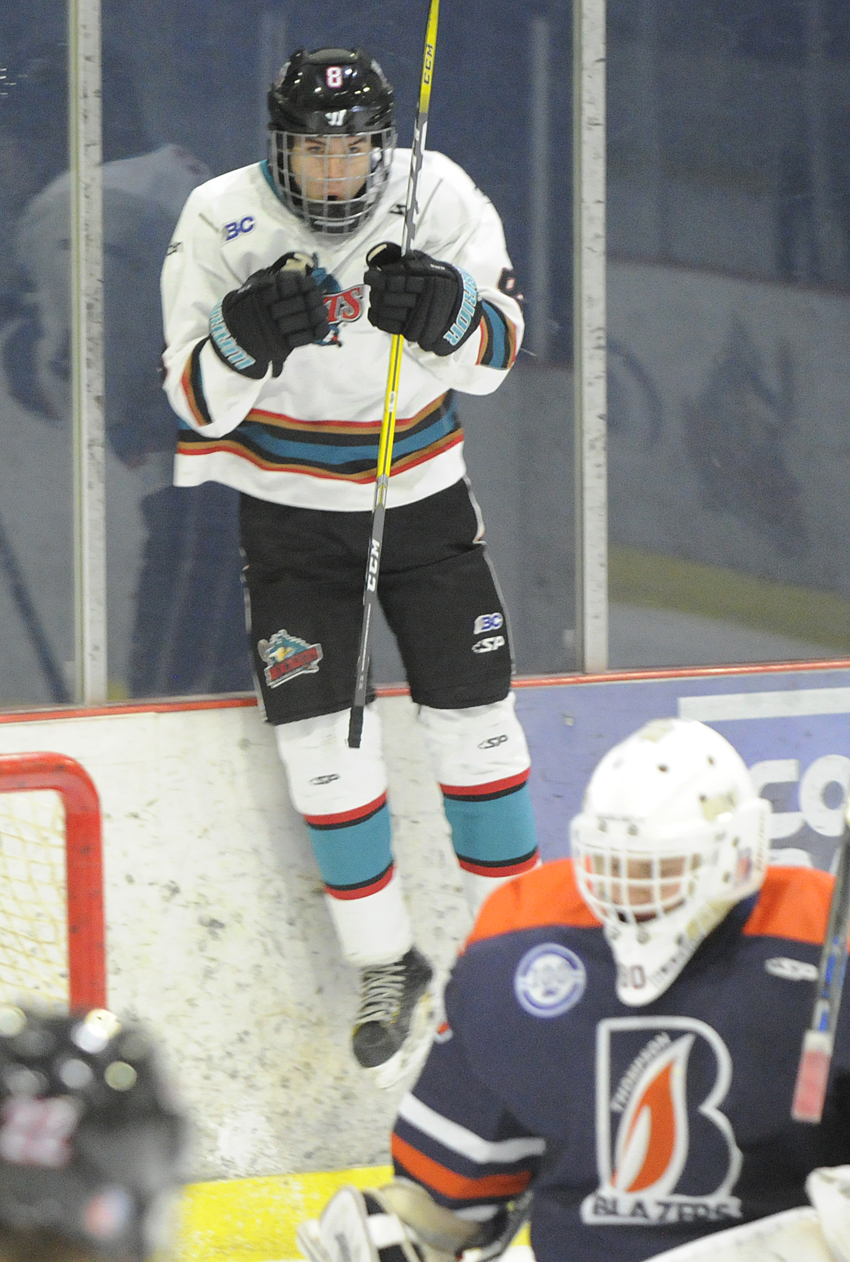 Nicholas Bolin, up against the team he played with last season, opened the scoring with his third goal of 2018-19 in the second game of the weekend while Dylan Wightman also notched his third and rookie Steel Quiring of Vernon posted his first BCMMHL goal in the third period.

Defensively, the Rockets received a solid effort from 16-year-old Liam Tereposky of Yellowknife, who played at the OHA in Edmonton last season. 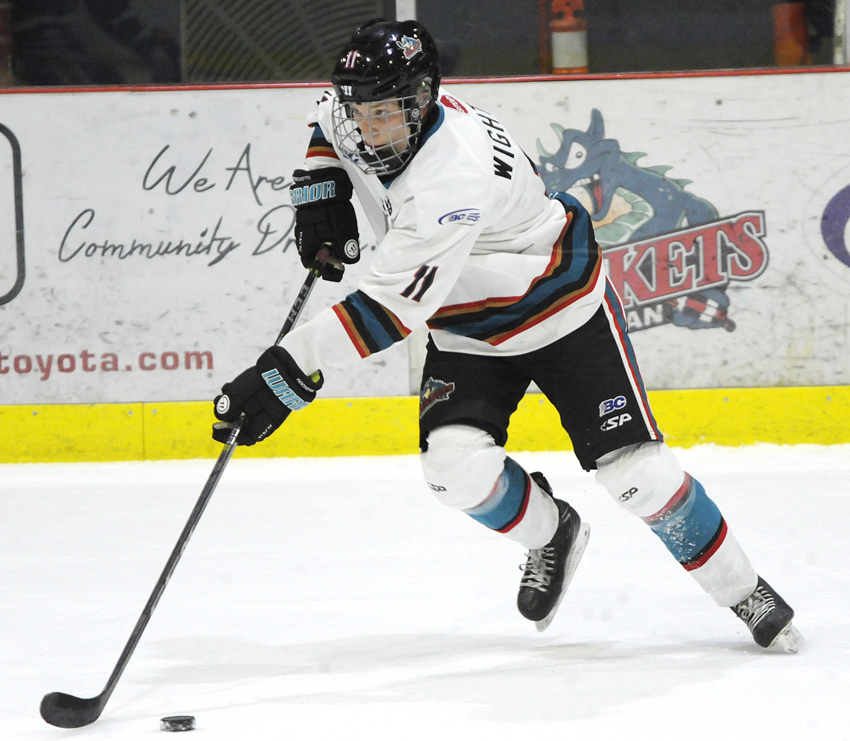 “Liam was outstanding in both games on the weekend and was a big reason we were able to sweep,” said Ferguson. “But we have to find a way to limit some of the higher quality chances we gave up.”

Also on the agenda at practice this week as they prepare for a pair of games in Abbotsford against the Vancouver North East Chiefs (1-2-1), will be “cleaning up the neutral-zone play and working on the power play.”

And of course: “understanding what playing 60 minutes feels like,” added Ferguson.