Late in the third period of the Vernon Vipers and Prince George Spruce Kings BCHL game, Vipers rookie centre Will Blackburn collapsed on the ice after hitting his head near the boards. 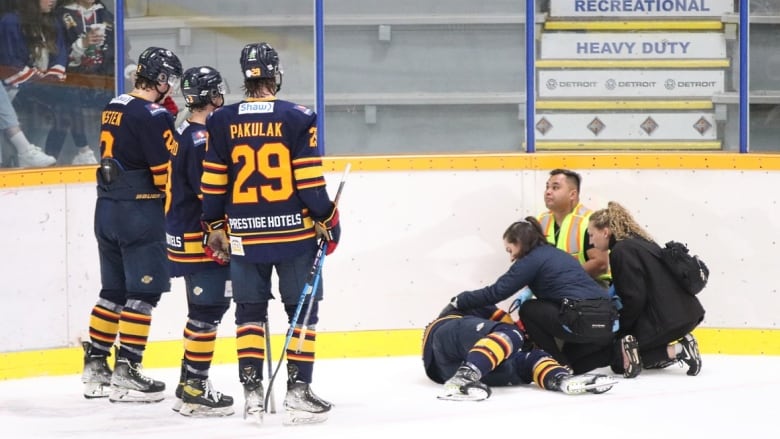 The Dorval, Que. native laid motionless on the ice as the Kopar Memorial Arena first aid attendant and both team's trainers and athletic therapists tended to him.

During that time, officials called 911. However, it wasn't until the Spruce Kings public address announcer drove to the University Hospital and asked paramedics at the bay for help for the ambulance to arrive.

It took approximately 50 minutes for the ambulance to make the three-minute trip to the rink and tend to Blackburn, according to Spruce Kings GM Mike Hawes.

"A couple of times, we were put on hold and weren't able to get through to anyone at the dispatch," said Hawes.

"I had no answers for the Vernon coach and the players, as they were getting frustrated. The way we ended up getting the paramedics to attend was the fact that we sent one of our staff members up to the hospital to talk to them face-to face."

The hour-long ordeal led to both teams deciding to call the game early, which Vernon won 5-1.

The Vernon Vipers have received good news and Will Blackburn has been cleared to rejoin the team for the trip home. Thanks to everyone who reached out.https://t.co/Q2icF0rWEf

"We are extremely grateful to our athletic therapist Yasmine Jutt and the medical professionals for taking such great care of Will," he said. "We'd also like to thank the Spruce Kings organization for their help in a very tough situation."

Blackburn was able to rejoin the team for the bus trip back to Vernon.