A driver made no attempt to avoid a collision after crossing into on-coming traffic, while another driver tried to veer out of the way before being struck.

New information regarding the tragic Easter Sunday car accident near Vernon has come to light.

When emergency personnel got to the scene, they found 19-year-old Eric Robertson from Armstrong deceased in the passenger seat of a 1996 Chevrolet pickup truck. He was killed after the truck crossed the centre line and struck a 2001 Volvo Station Wagon. 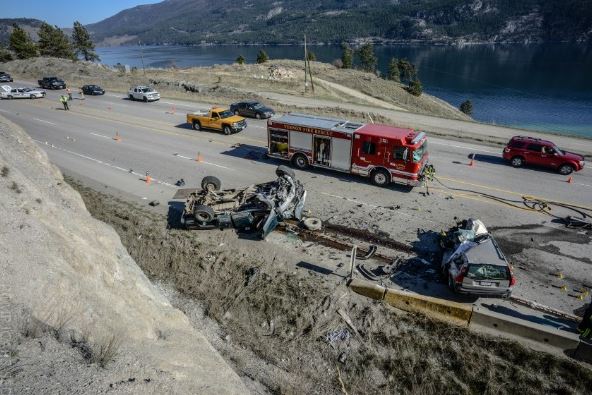 The driver of the truck, 21-year-old Brandon McGregor of Spallumcheen, was taken to hospital in stable condition. He was later released from hospital.

After considering evidence, B.C. Coroners reporter Margaret Janzen determined that the driver of the truck, after moving into the on-coming lane, made no attempt to slow down or avoid the collision with the on-coming Volvo.

The driver of the Volvo pulled over the shoulder of the highway and slowed down, however; his efforts to avoid the collision were unsuccessful.

After the two vehicles struck one another, the truck flipped over the Volvo and landed upside down.

The Volvo remained upright and both airbags were deployed. Both occupants of the Volvo were wearing their seatbelts.

Finding this incident to be an accident, the B.C. Coroners Service is not making any recommendations to further this investigation.

In April of 2014, McGregor was charged with Dangerous Driving Causing Death.