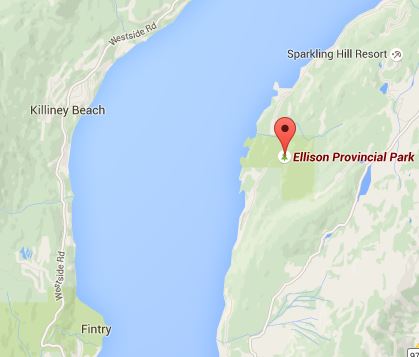 Location where the man attempted to swim across the lake (Photo Credit: Google Maps)

Vernon Search and Rescue found themselves busy with a rescue Friday evening as reports came in to them that a man was attempting to swim across Okanagan Lake.

At around 5:00 p.m., RCMP was called to Ellison Provincial Park to help a man who was swimming from shore to shore. The man had removed his clothing and left it on a rock before jumping into the water. Vernon SAR were called out to help with their boats, and they located the man several hundred metres from the opposite shore. The man was returned to Ellison where he apologized to crews for his actions.

Apparently the situation started over some drinks and an argument. The 19-year-old Alberta resident was taken to hospital to be checked out as his body temperature had gone low enough to be of concern for paramedics.