UPDATE: Jan. 30 @ 4:30 pm) - Nearly 24 hours after the public found out Jay Rosenberger was safe, his family unveiled details on where the 38-year-old was found.

"We finally located Jay on Vancouver Island. We are with him and he is now safe, but there is a very long road ahead. We are now working on getting off the island," his sister Holly Frances wrote in a Facebook post. 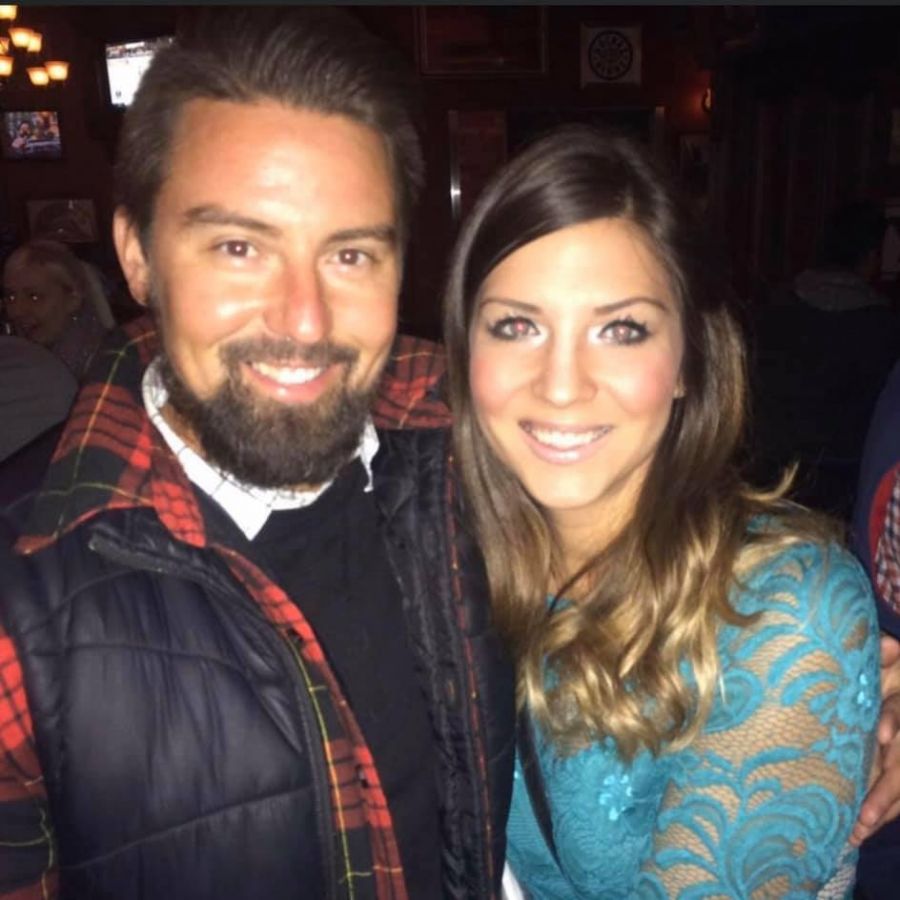 Frances thanked everyone who helped them locate their loved one, but asked for privacy as they move forward and try to heal from this experience.

"What we need from everyone right now is compassion; please leave your judgments and rude comments aside," she said.

"Our priority right now is to provide the love and support to Jay that he needs."

Frances added that the funds donated to the GoFundMe page will be dispersed to cover the expenses associated with finding Rosenberger.

The remaining money will be donated to charity.

(UPDATE: Jan. 29 @ 2 pm) - Police have now also confirmed that Jay Rosenberger has been found and is safe.

(UPDATE: Jan. 29 @ 1 pm) - Jay Rosenberger's family has finally searched the good news that everyone has been waiting to hear.

The 38-year-old Vernon man went missing around 11 pm on Friday night after leaving his shift as a manager at the Village Green Hotel.

"We can confirm that Jay has been located and is safe," said a post from Rosenberger's family on the Facebook group created to help search for the missing man.

"We will provide more information later today. Thank you everyone for all your love and support."

NowMedia will update this story when that information is made available.

(UPDATE: Jan. 29 @ 6 am): Jay Rosenberger, the missing Vernon man last heard from on Friday night, could be in the Lower Mainland, his family has said.

All information, they explained, leads them to believe Rosenberger was in the Lower Mainland as recently as Saturday afternoon. 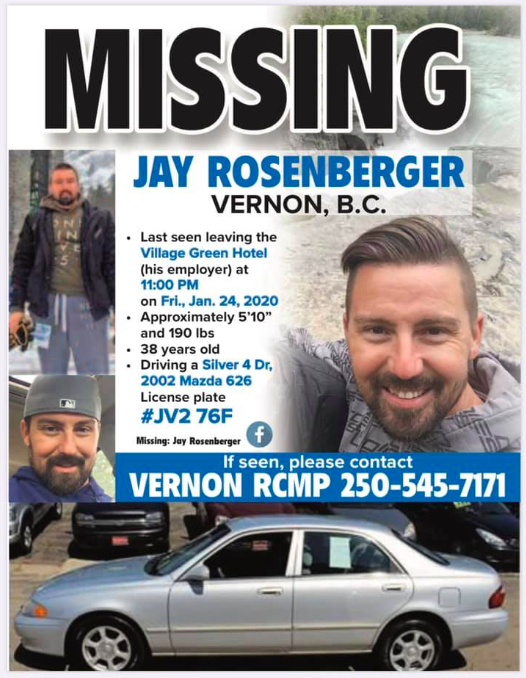 They asked that his picture and information be spread around the area as they continue their search.

(UPDATE: Jan. 27 @ 10:45 am) - RCMP have finally released more information on Jay Rosenberger, a missing Vernon man who was last heard from on Friday night. 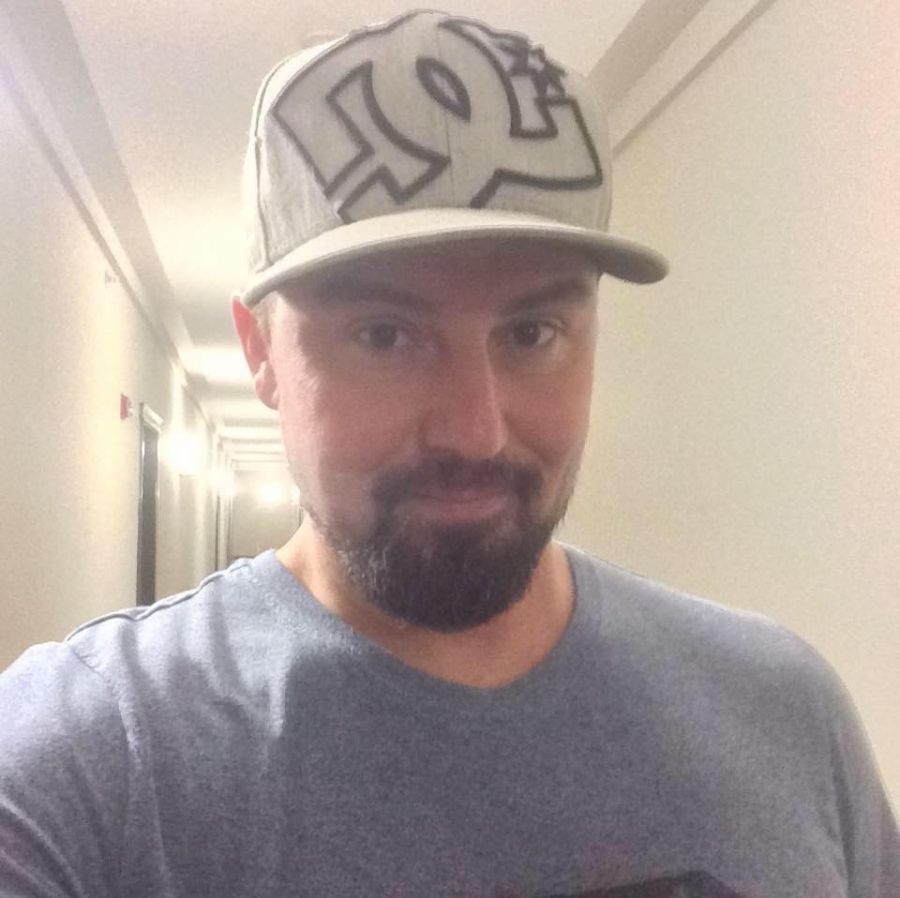 It's also been confirmed that his car, which has also not been seen since Friday, is a light grey 2002 Mazda 626 with the license plate JV2 76F.

If you have any information on Rosenberger's whereabouts, you're urged to contact your local police immediately.

On Sunday, Rosenberger’s family travelled from Edmonton to the Okanagan to look for the missing 38-year-old man, who was last seen late Friday night in Vernon. 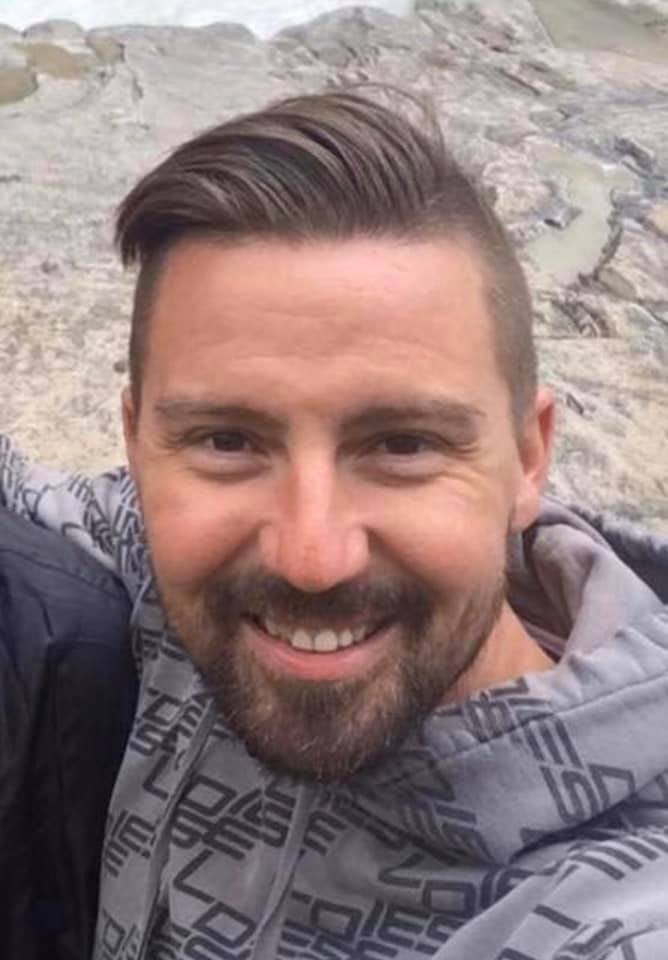 “Jay was last seen on Friday, Jan. 24 at 11 pm at the Village Green Hotel where he works as the manager,” says a Facebook post made by his sister, Holly Frances.

“He was supposed to return to work and had plans with friends the next day, but never showed.”

Frances says her brother's phone is dead, or at least not on, and his charger was found at home.

Rosenberger’s car is also missing, but he bought it recently so his family isn’t 100% sure about its make, model or license plate number. 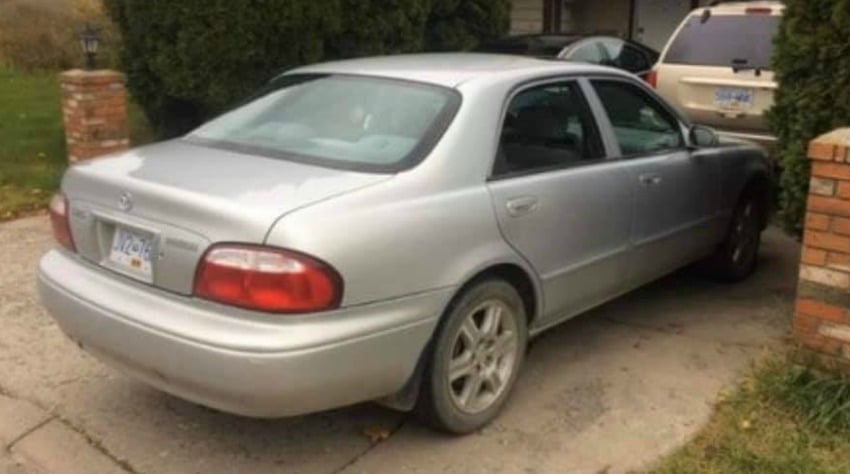 However, a Facebook group formed to aid the search for Rosenberger has identified it as likely being a Mazda Protege sedan from the early 2000s.

It appears the first five characters of the license plate are JV2 76, but the final letter or number is unknown.

Frances says Rosenberger was officially reported missing with police on Saturday, but an email to the Vernon RCMP from NowMedia has not yet received a response.