UPDATE: Over 10 vehicles involved in collisions along 1 km stretch of Hwy 97 this morning, police say

According to the RCMP, more than 10 vehicles were involved in either single-vehicle or multi-vehicle collisions along a short stretch of the highway, south of Vernon.

Officers were first called out to the area around 8 am for a report of a three-vehicle collision in the northbound lane of Hwy 97.

"While en route to the scene, police received additional reports of collisions occurring in the same area," explained an RCMP release.

"In a short period of time, over 10 vehicles were involved in either single-vehicle or multi-vehicle collisions along an approximately one-kilometre-long stretch of Hwy 97."

Fortunately, no serious injuries were reported and crews were able to complete their work and reopen the highway after just two hours.

The RCMP is warning the public that the current weather conditions will likely make the route treacherous again this evening and is asking the public to avoid travel in the area is possible.

"As temperatures drop this evening, the slush and water that has accumulated on roadways is going to freeze causing ice to form on roadways," said Cst. Chris Terleski.

"If you do need to travel, please use caution as sudden changes in weather can cause road conditions to deteriorate. Reduce your speed, leave plenty of space between your vehicle and the next, and adjust your driving to the conditions."

They were previously closed due to a "vehicle incident," DriveBC explained.

Conditions are still slippery on many roads throughout the Okanagan, however, and motorists are urged to drive with caution.

According to DriveBC, a vehicle incident between Birnie Road and Kalamalka Lakeview Drive is the reason for the closure.

A detour is available via Kalamalka Lakeview Drive, but traffic is still lined up and at a standstill on the highway. 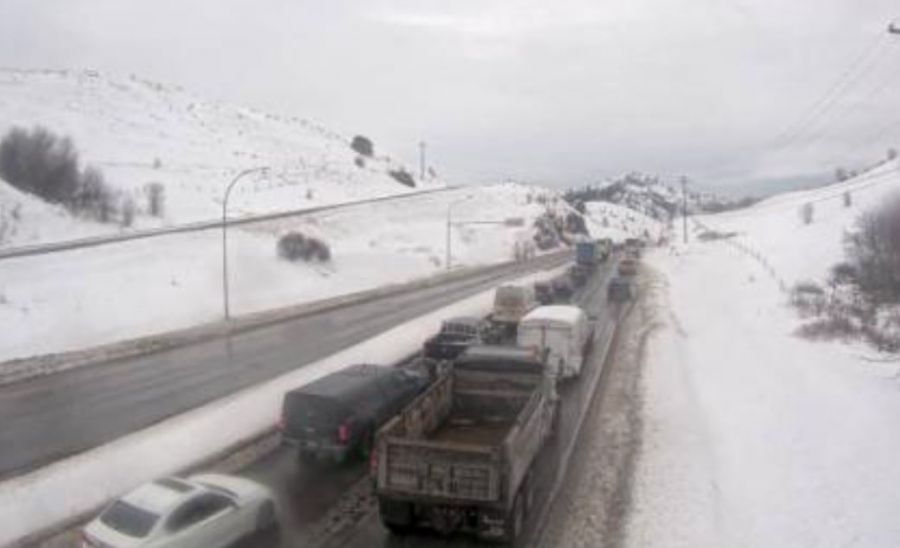 DriveBC says an assessment is currently in progress, but has not provided an estimate on when the highway will reopen.

The next update is expected around 11 am.

The City of Vernon issued a release this morning that warned drivers of slippery driving conditions as rain continues to fall across the Okanagan.

"Drivers and pedestrians are urged to use extreme caution as they travel in and around Vernon today, where roads may appear to be wet, but may actually be icy due to changing weather conditions," the City said.