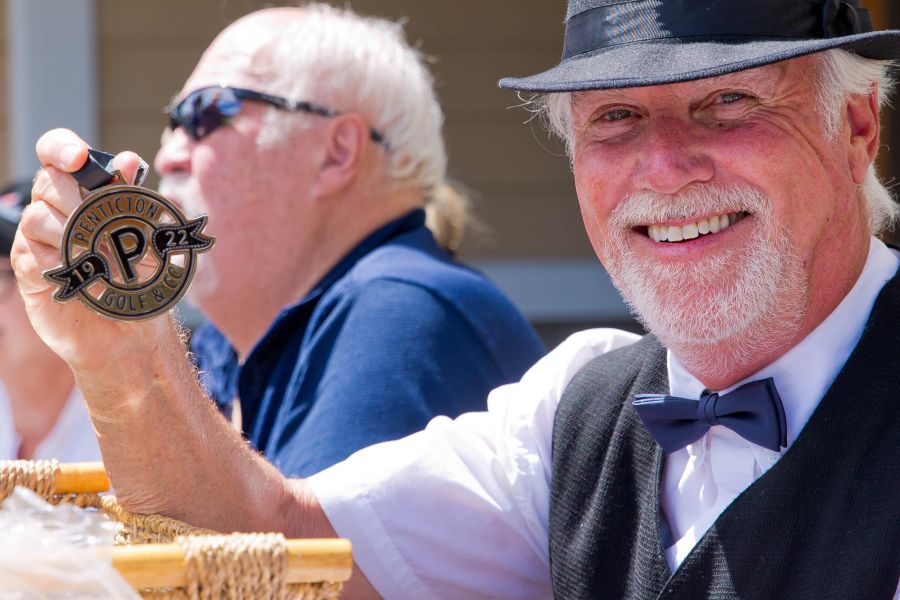 That's the year the Penticton Golf & Country Club was officially established. And in the grand scheme of things, that makes it pretty old.

One hundred years old in fact. Same age as the BBC. And Readers' Digest. 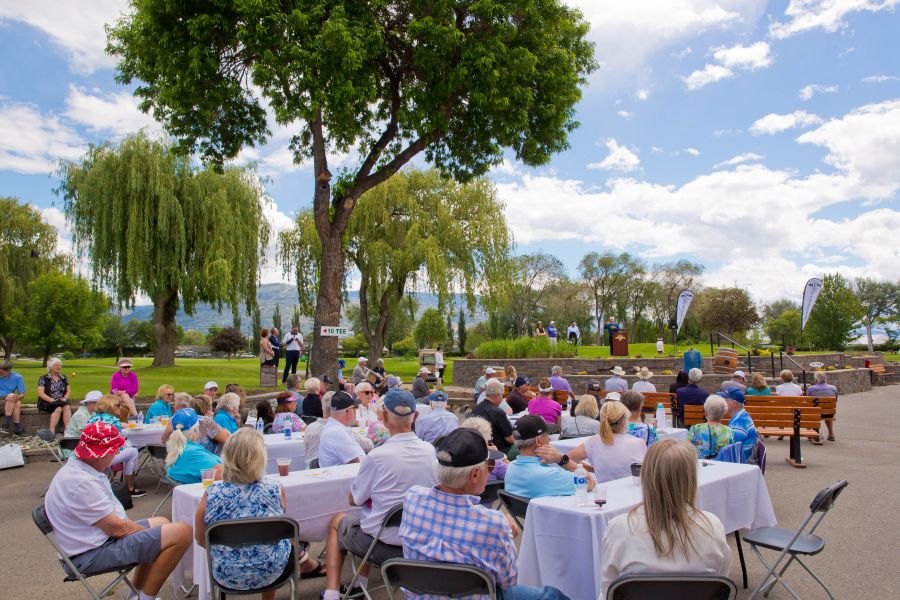 The Club intends on celebrating throughout the year -- as you should when you turn 100 -- but this past Saturday they held an afternoon soiree to officially mark the occasion.

The day attracted a whole bunch of well-known locals to have a beer and a bite to eat, listen to a variety of speakers, get re-acquainted with friends, and perhaps play a round. 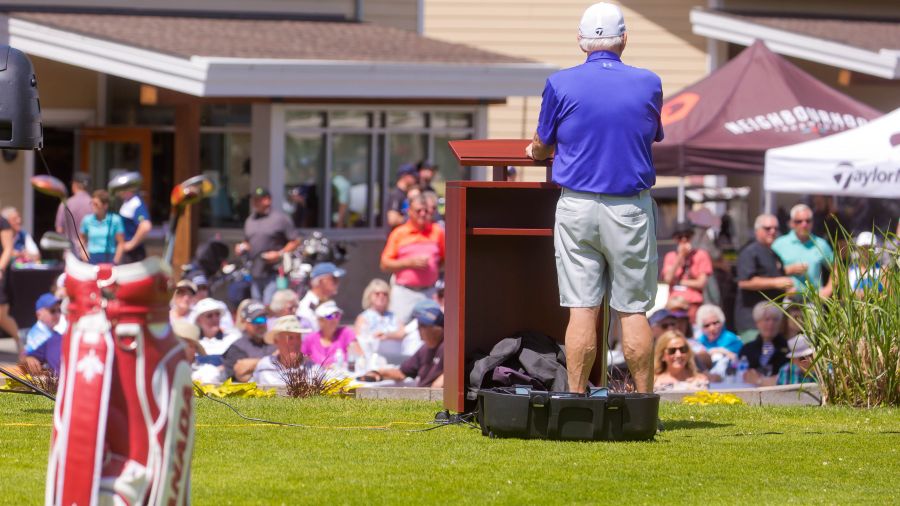 At least half the town's breweries were serving up their best beers for a crowd that topped out at two or three hundred, many nibbling at finger foods at tables that were set out for the day. 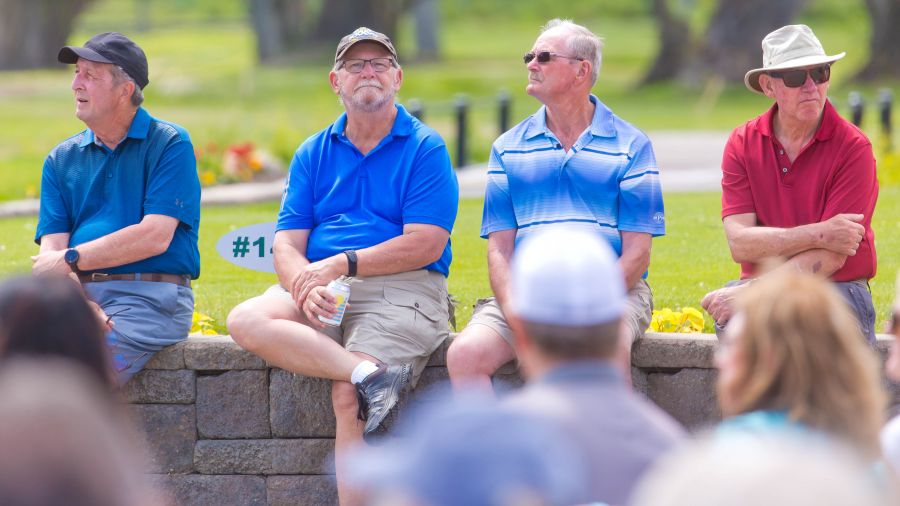 Dow explained that the Kettle Valley Railway, a hugely important people- and goods-moving entity at the time, had originally pushed for a course in Penticton.

"When they first started talking about golf here in 1917 before Penticton Golf & Country Club was formed, one of the things the KVR wanted to promote was that we needed to bring tourists to Penticton. And the golf club and the city had to get together to make sure that happened." 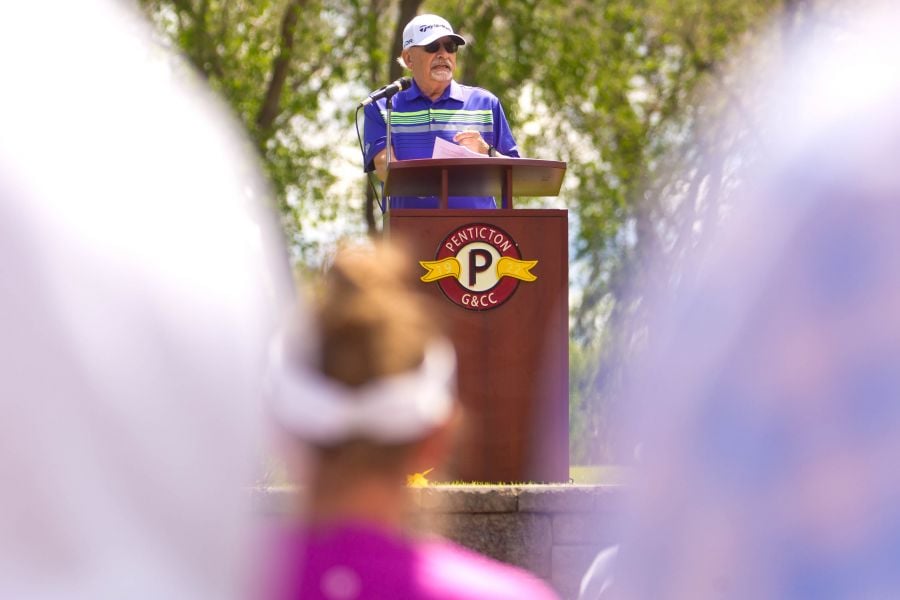 But what most surprised us from our discussion with Dow was the gypsy nature of the course. By our count, it changed homes at least four times.

"It used to be located where Memorial Rink is currently," said Dow, "then it moved to where King's Park is, then it moved to the Wiltse Flats area (where the view was apparently wonderful but water was problematic), then back to King's Park, and then slowly shifted this way to this location in the early 60s." 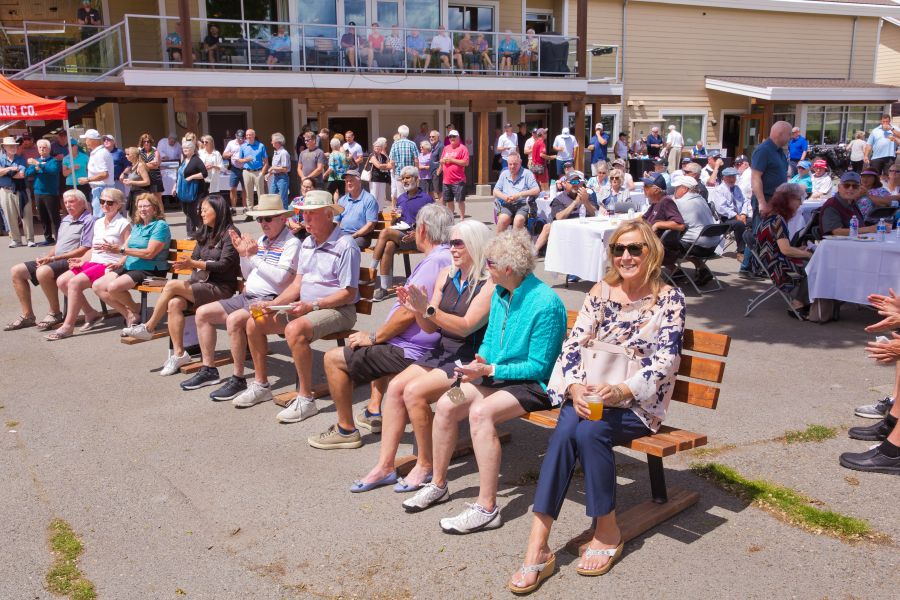 Dow assured us the course, now six decades in the same location, wasn’t going anywhere soon, then walked us over to longtime member Charlie Richards, who at 85 years young still hits the links three times a week and still shoots in the 80s.

"I joined in 1960," said Richards, graciously interrupting his socializing to chat with us. 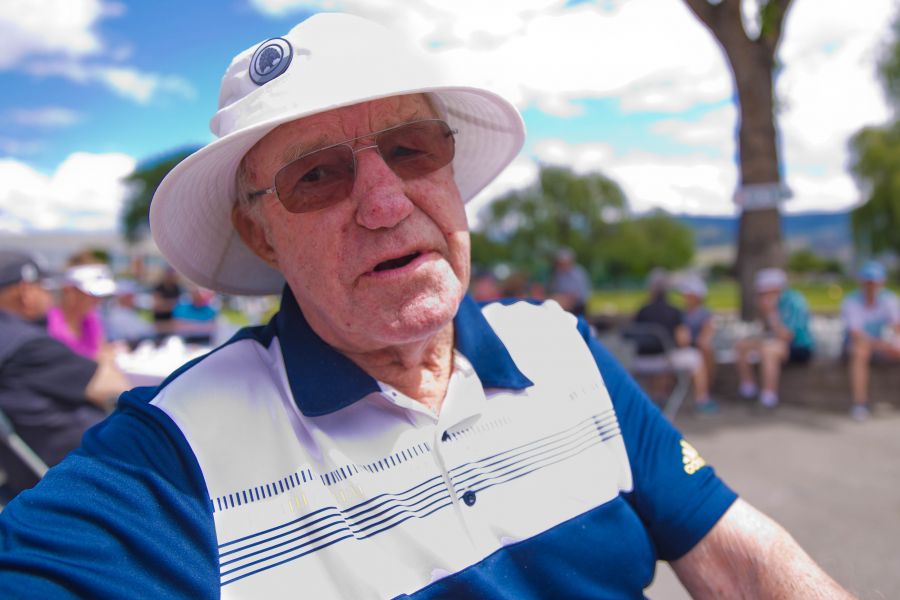 "It was a nine-hole course at King's Park then," he said. "Where the Canadian Tire and the College are, that was all part of the golf course. Then there were three holes on this side of Railway Avenue, then we went back across and played the last two holes to the clubhouse."

Richards wasn't a golf nut before he joined. Instead, he said, he played a "lot of baseball" at the King's Park diamond and was persuaded to give golf a shot by one of his teammates.

"I was a purchasing agent for Okanagan Manufacturers, which manufactured the Okanagan campers and trailers," he said. "They were on Okanagan Avenue in Penticton, but they're all gone now." 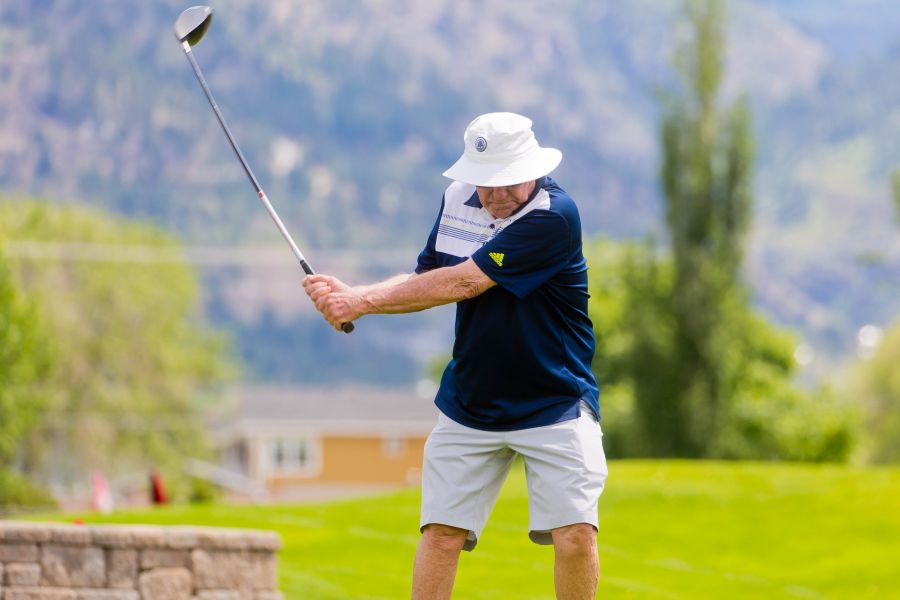 According to Richards, the course has "changed probably three times even after it moved over here. So it’s been quite a long story for the golf club."

Married to Marilyn for 63 years as of earlier this month (he says they were "high school sweethearts"), Richards claims it's the camaraderie more than anything that still gets him out today. 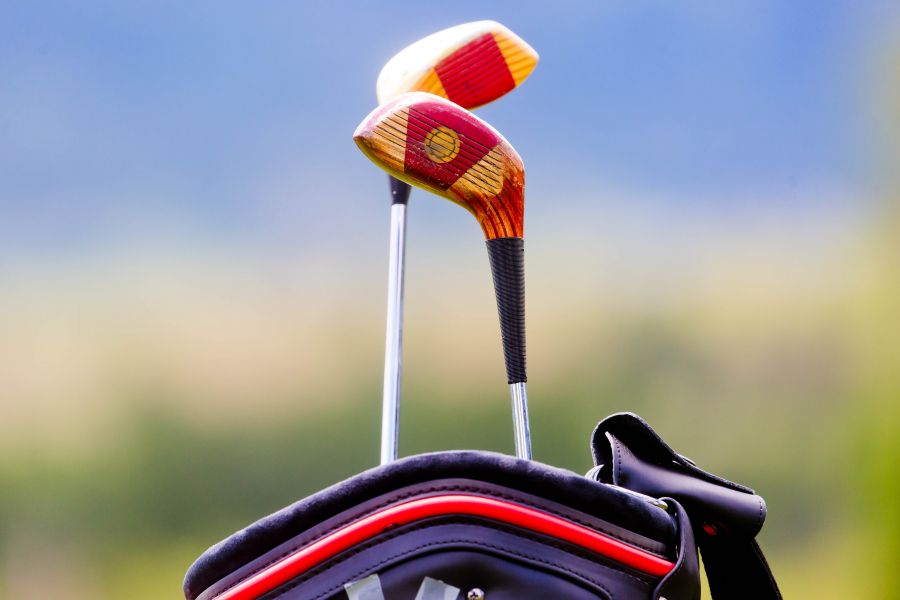 "I wasn't an every-dayer," he said, "but they had an excellent men's night on Thursday nights. Half of the golfers in Penticton would come at noon on Thursday. 200 guys.

"Oh, it was excellent. You'd come down and play your 18 holes and they'd have draws upstairs, and 50/50. And poker games going on downstairs. They had a pool table too." 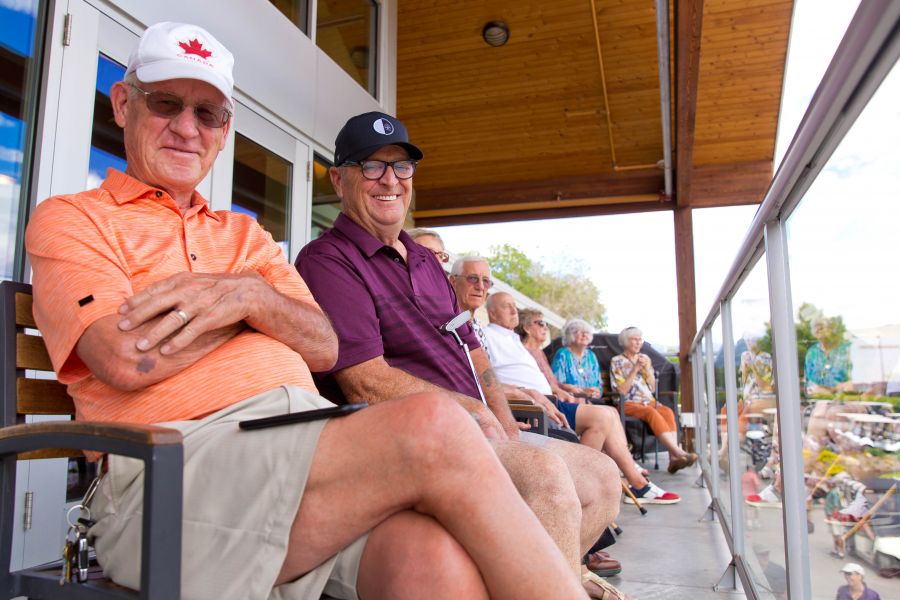 Richards' best-ever round was a 69 (par is 70) and he said he's had five holes in one on the course over the years.

An even more notable face Saturday afternoon was that of AJ Eathorne, who spent a decade as a pro golfer on the venerated LPGA circuit. 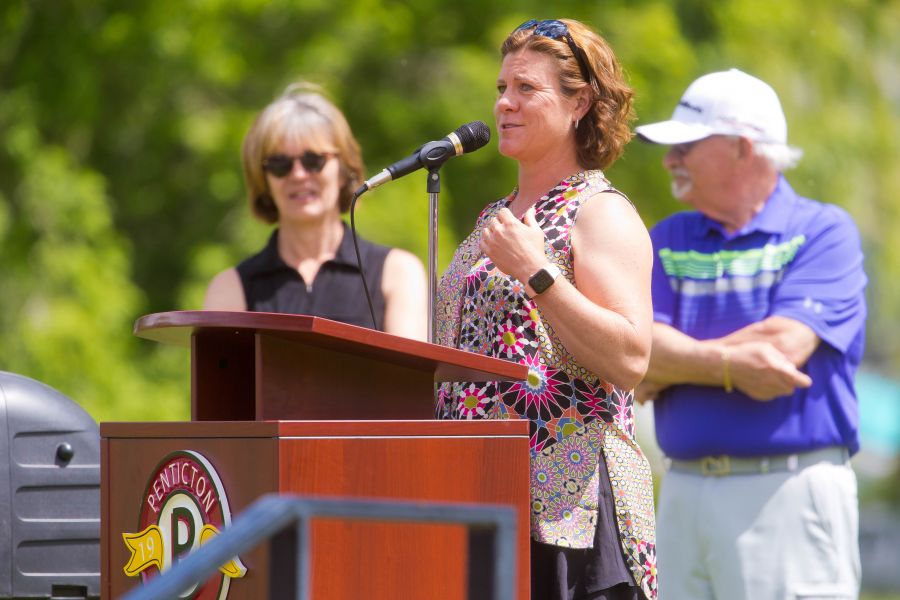 "I joined the Penticton Golf Club when I was 12, in 1988," she said. "My dad (Bevan, who was at Eathorne's side as we talked) was a member and he got my brother Steve into it. He's a couple years older and we just kind of went from there.

"And then I won a little tournament in Vernon. It came with a $15 prize and a trophy. And I was hooked." 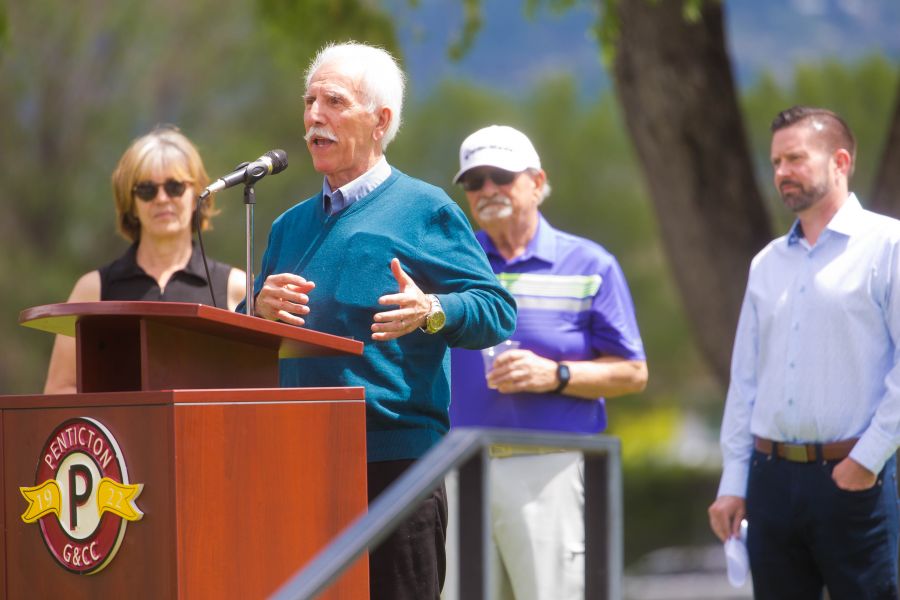 Eathorne, a multi-sport athlete who continued to play volleyball and basketball throughout high school, eventually chose to pursue golf because "I thought I could play it longer."

She then grabbed a golf scholarship to New Mexico State University and moved on to the LPGA. 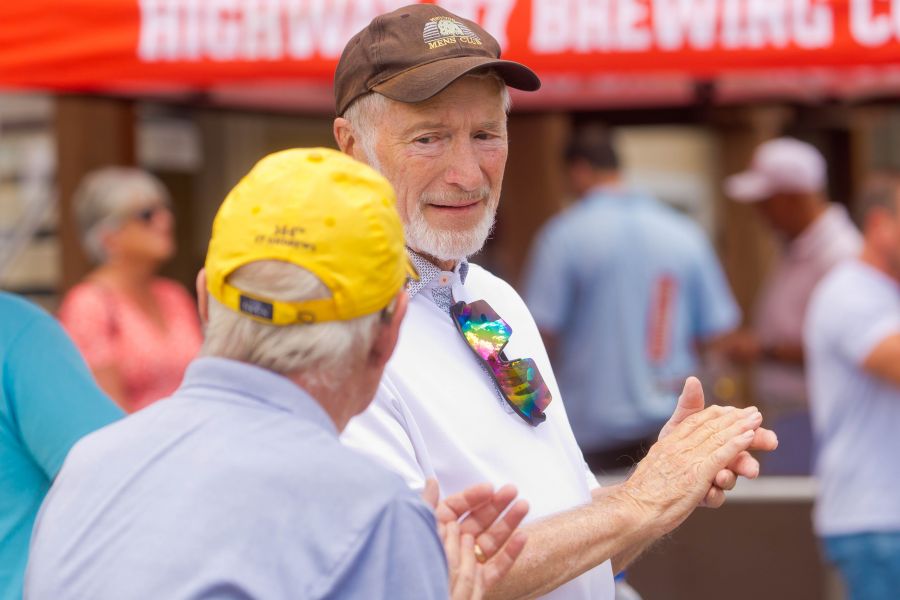 We asked what made the Club such a good training grounds and she was quick to reply. 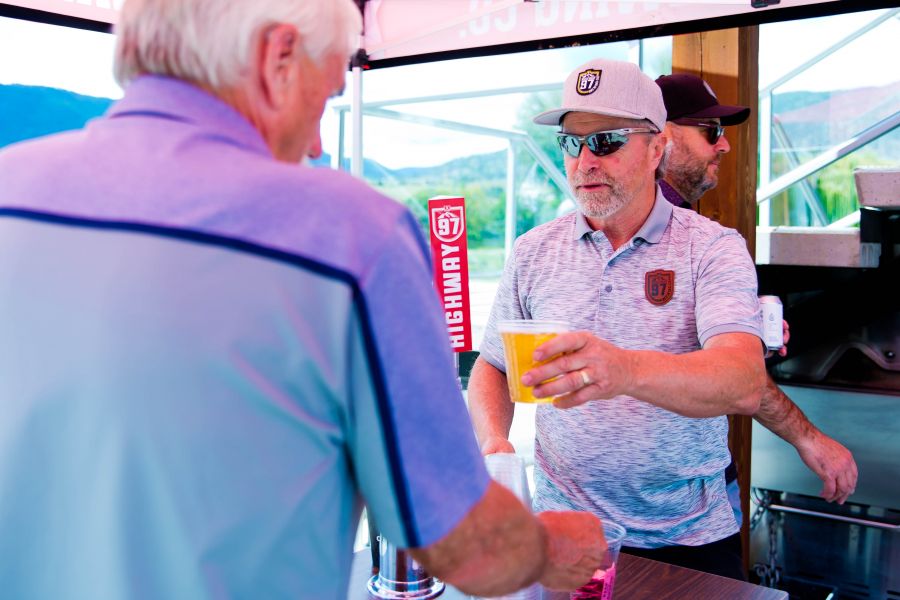 "We'd joke that if there was an empty spot on the tee box, you'd just go and play with whoever would play with you. And you’d do it again and again until it got dark. 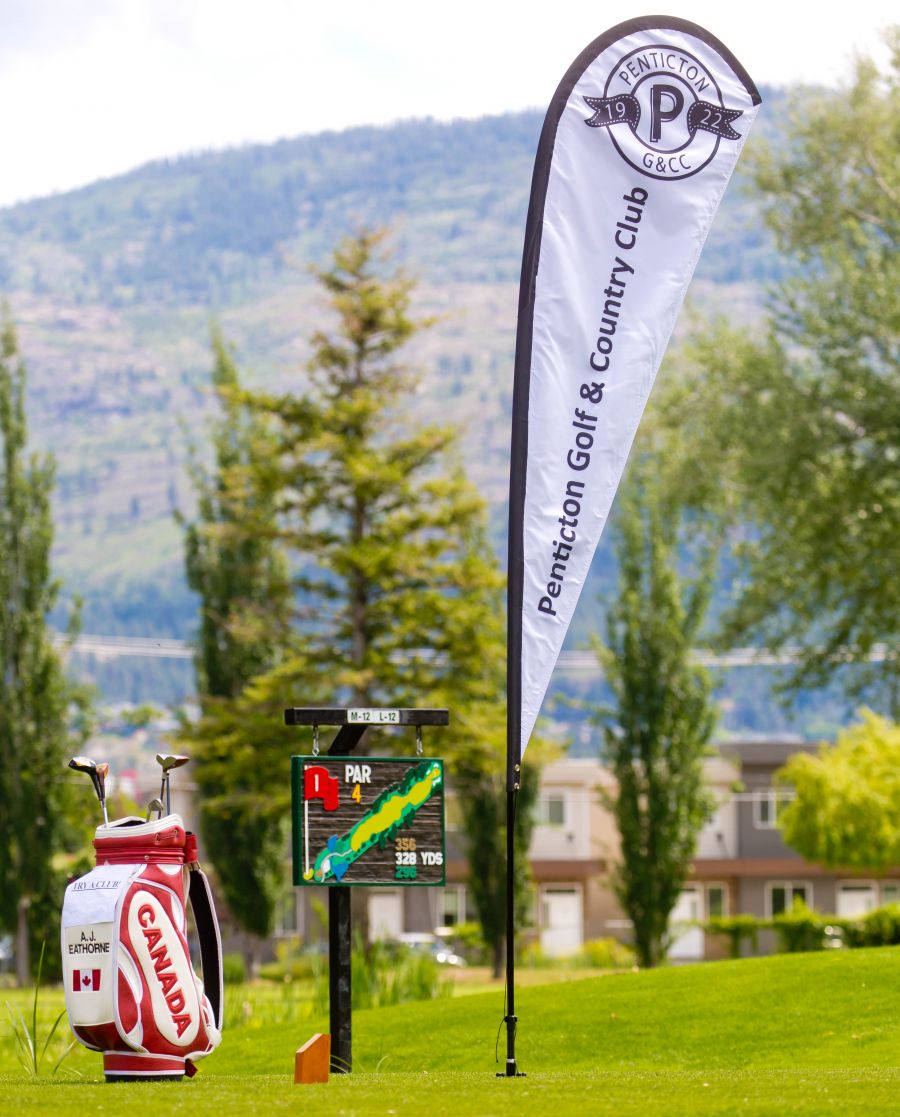 "There were a lot of good juniors here. We pushed each other. You played for a diet Coke and a bag of Cheezies."

Also on the guest list was noted Penticton artist, club member and president of the Federation of Canadian Artists Ron Gladish, who took us on a tour of all the paintings in the 100th anniversary art competition. The Club will ultimately purchase one of them to display in perpetuity. 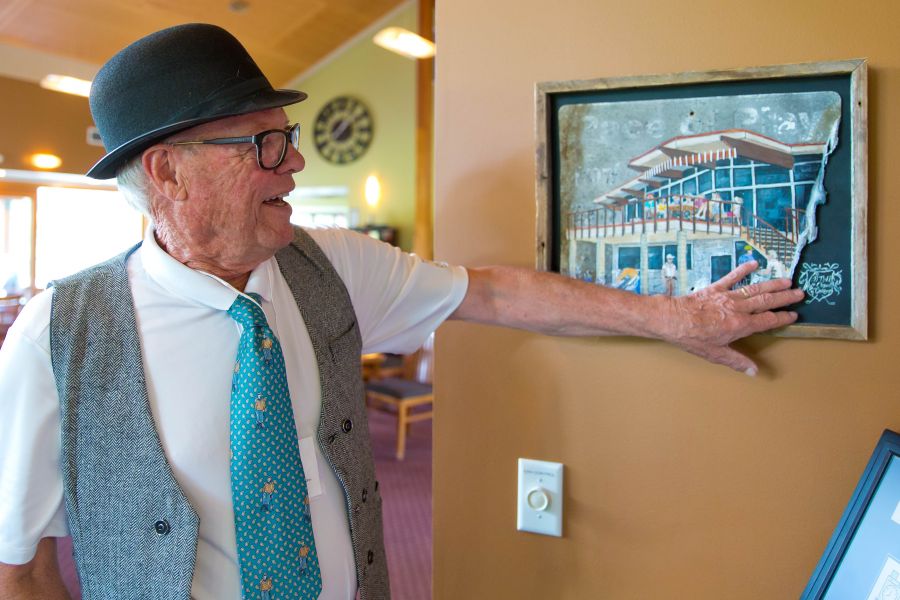 Gladish was also one of several voices to speak up Saturday when we asked about golf courses and their impact on the environment. We weren’t after any definitive results. It's merely that the environment wasn't such a big concern when the Club moved to its current location, so we wanted a few opinions. And we got them.

"The reality is that there's tons of wildlife here," said Gladish, an artist who often paints the natural world and certainly appreciates its well-being. "We have a fabulous bird population. Some of the waterfowl species that we don't see except when they stop here. Cinnamon Teal. Buffleheads. Our wood duck and blue heron populations are fabulous. 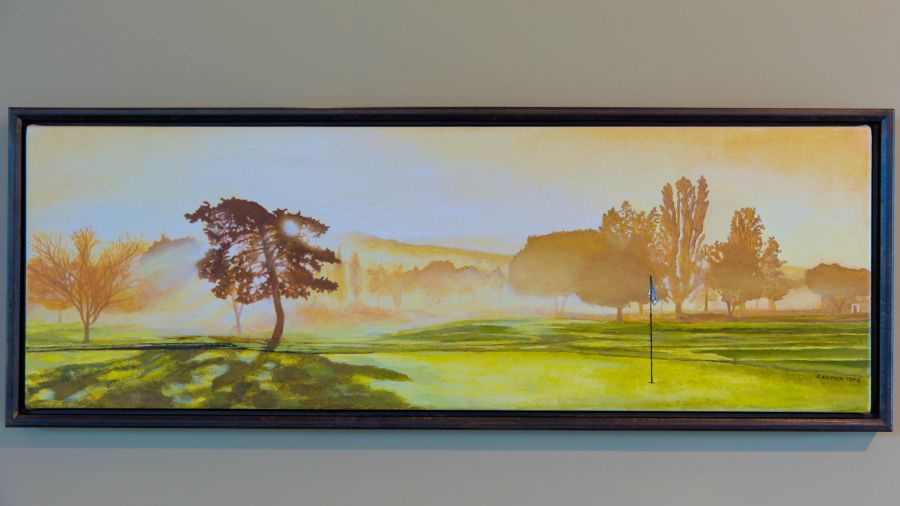 "And it’s all to do with the water management and the green space. This stream here is part of an overflow water system that was built in the 50s with the city to manage water. It's all integrated.

"We're recognized by the Audobon Society (of Canada) for our work in protecting bird species." 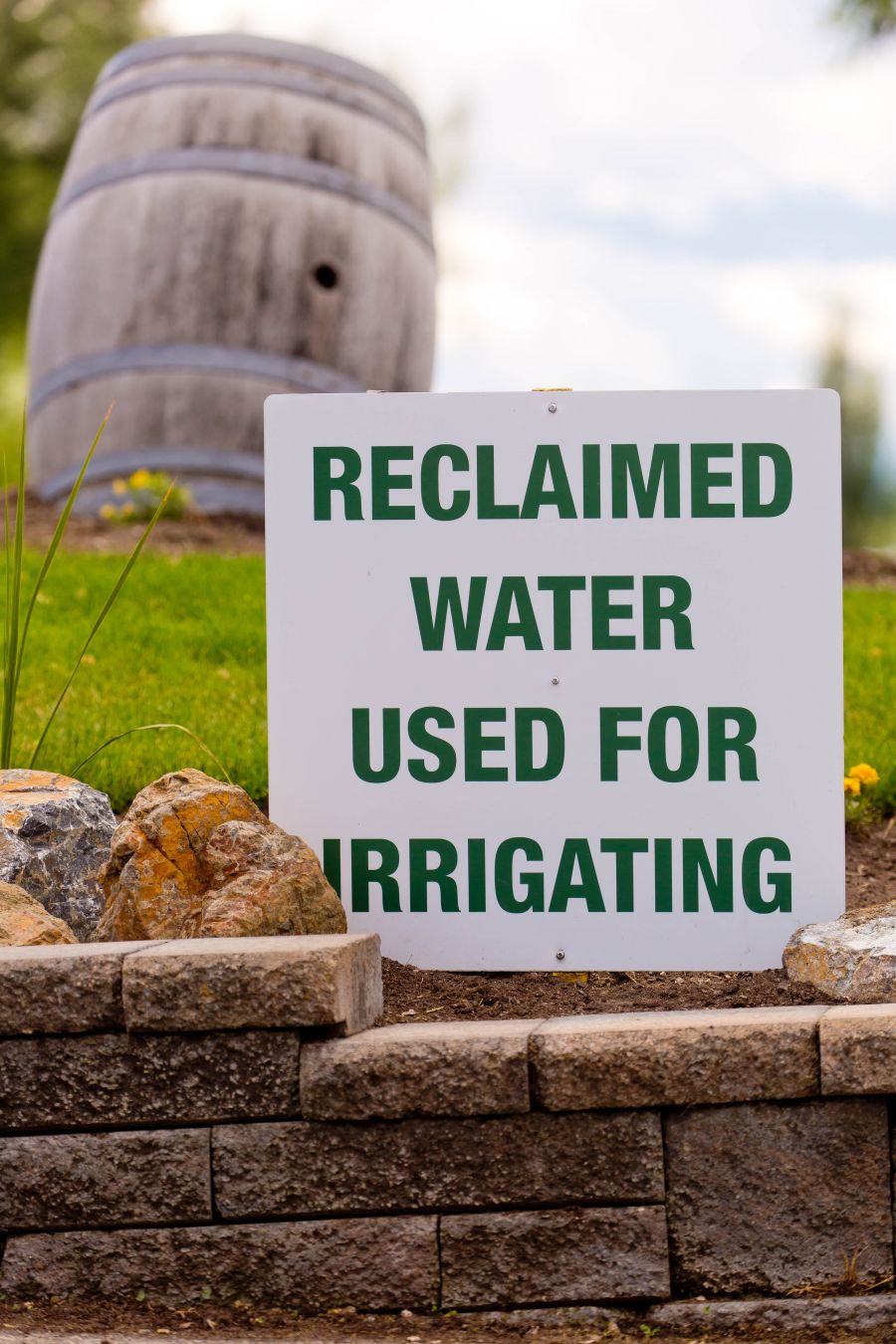 In the absence of course superintendent Franz Unterberger, GM Guy Dow backed up Gladish, saying, "There are steps involved to obtain Audobon certification, and we are in the midst of obtaining all those steps.

"We also got involved with the South Okanagan Naturalist's Club, who come regularly to do bird counts and check even on those birds that use this area in migration. We're home to endangered species too, so there are a lot of animals and reptiles and amphibians who use this area as their refuge." 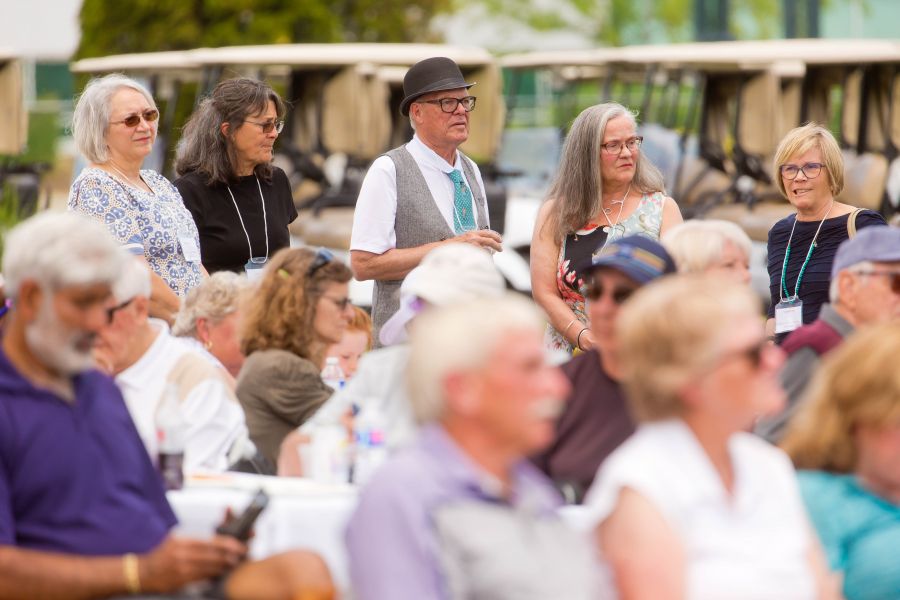 Ultimately, a common theme emerged from our conversations Saturday afternoon. Everyone we asked absolutely loves the place. They love its layout, they love its upkeep, they love its people.