Chiefs off to perfect start as KIJHL opens regular season

The Kelowna Chiefs are in familiar territory – first place in the Bill Ohlhausen Division.

The Kootenay International Junior Hockey League kicked off its regular season on Friday the 13th - the late start due to the COVID-19 pandemic.

The Chiefs, a KIJHL perennial powerhouse, opened with a pair of victories.

The season officially got underway Friday at Rutland Arena, with the Chiefs scoring twice in the third to break a 2-2 tie and defeat Summerland 4-2.

Liam Dreger scored the winner on the power play 7:41 into the third. Jordan Woytas, Patrick Reynolds and Jack Downey each had a goal and an assist.

The Chiefs travelled to Princeton Saturday, built up a 3-0 lead, and held on for a 3-1 victory for a perfect opening weekend.

Michael Toole made 30 saves for his second win of the weekend, while Spencer Horning and Tegan Neuman each had a goal and an assist.

Law’s former team, the Osoyoos Coyotes, were winless in 17 games to start last season, but came away from opening weekend with three of four points.

“I’m obviously very happy with the weekend, especially getting three of four points on the road,” said head coach Carter Rigby. “I’m very happy with the group. We have a tight group. The biggest thing I wanted was to bring in good players, but mostly, good people. Every kid in that dressing room is here for the right reasons.

“The kids want to win and come in and prove something. We’re changing the culture that’s been there the last few years and bringing the program back to where it was a few years ago when Kenny (Law) was there.”

Levi Carter led Osoyoos with a three point game, scoring the opening goal and giving the Coyotes some insurance in the third period, helping his squad beat Grand Forks 4-1 Friday.

The story was Osoyoos netminder Jordan Berschiminsky, who stopped 49 of 50 shots he faced, including 19 in the opening period and 22 in the second frame.

The Coyotes then travelled to Nelson Saturday, getting a goal from Crae Dawson in the final minutes of regulation to force overtime, only to fall 4-3 to the Leafs.

“He’s the real deal. I’m very happy with landing Jordan,” said Rigby. “I had some contacts out east. It’s always difficult when you’ve never seen the kid yourself, but we signed the kid. I won that gamble for sure. He’s unreal. He battles and competes and wants to move on and play college. 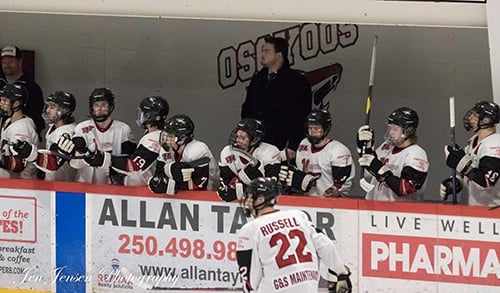 The Steam earned a weekend split after beating Princeton 3-1 in their home opener Sunday at Summerland Arena. James Johnston, Brennan Wilson and Jacob Schulting scored unanswered goals in the third to give Summerland the victory.

North Okanagan came away with one of four possible points, giving up three unanswered third-period goals Friday in Chase to fall 7-5 to the Heat. Angus Allchin had a three-point game for the Knights.

Back in Armstrong for their home opener Sunday, the Knights battled back from a 2-0 deficit to force overtime, only to have Owen Barrow score 3:19 into overtime to give the Kamloops Storm a 3-2 win. Zac Funk had a goal and an assist for the Knights.

The Storm finished the weekend 2-0 after beating Chase 3-2 Friday in Kamloops.

Fans can watch all KIJHL games online by clicking here.