For the second year running, pandemic regulations forced organizers of Penticton Secondary's annual Toys for Tots to Teens event to schedule the entire thing as a drive-thru in the cold, blustery outdoors. 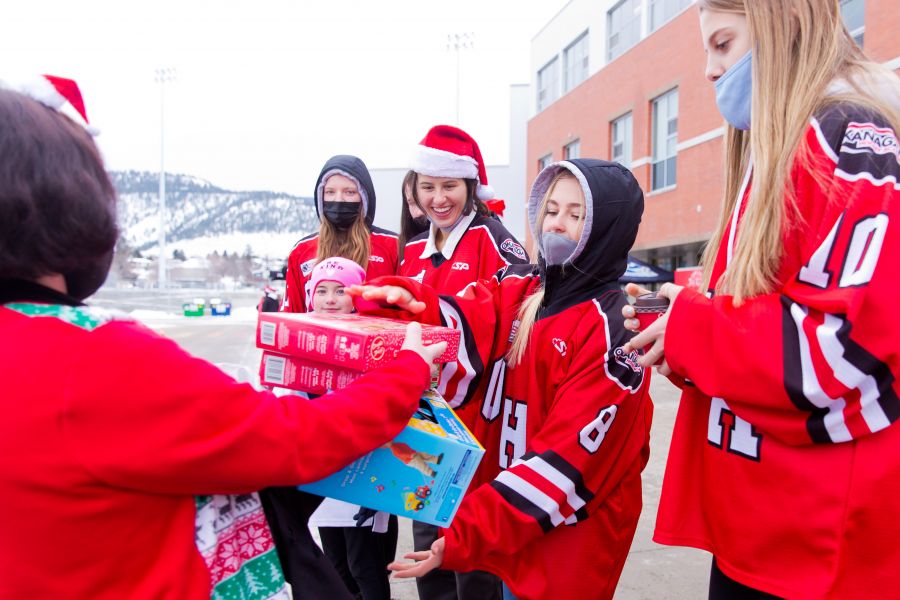 But that was the only conceivable bit of bad news in an otherwise spectacular morning for a program of giving that only five years ago was on the verge of collapse.

When Pen High, and specifically its "Leadership" students, took on T for T to T in 2018, it gave it instant stability. Then last year when COVID fears and rules were at their peak, the school and its students came up with a two-week-long umbrella program called Penticton Provides that safely raised mountains of toys and food and gobs of cash too. 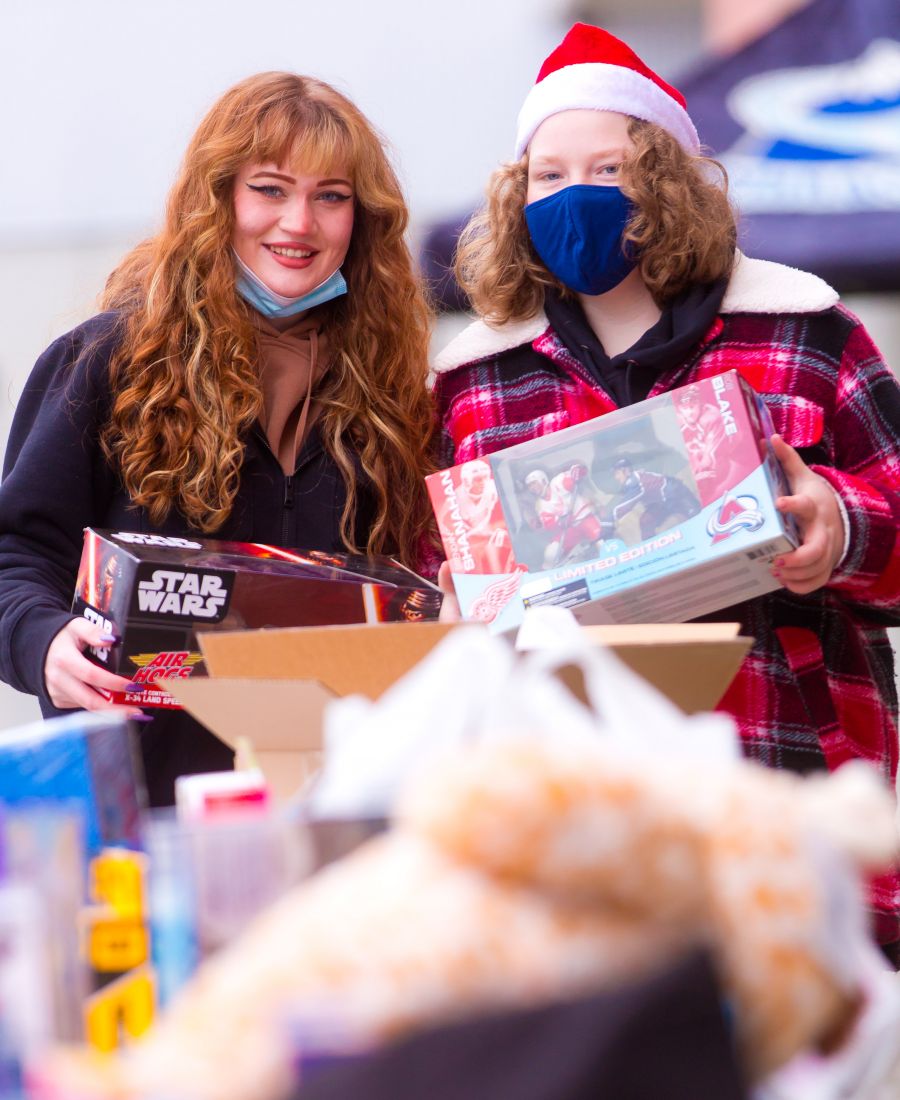 Clearly, this is one organizing team that has no problem switching things up when the situation warrants. And this year was no exception. Not only did the Penticton Provides program continue in 2021, the school also reached out -- big time -- to a stricken sister facility in still-recovering Princeton. 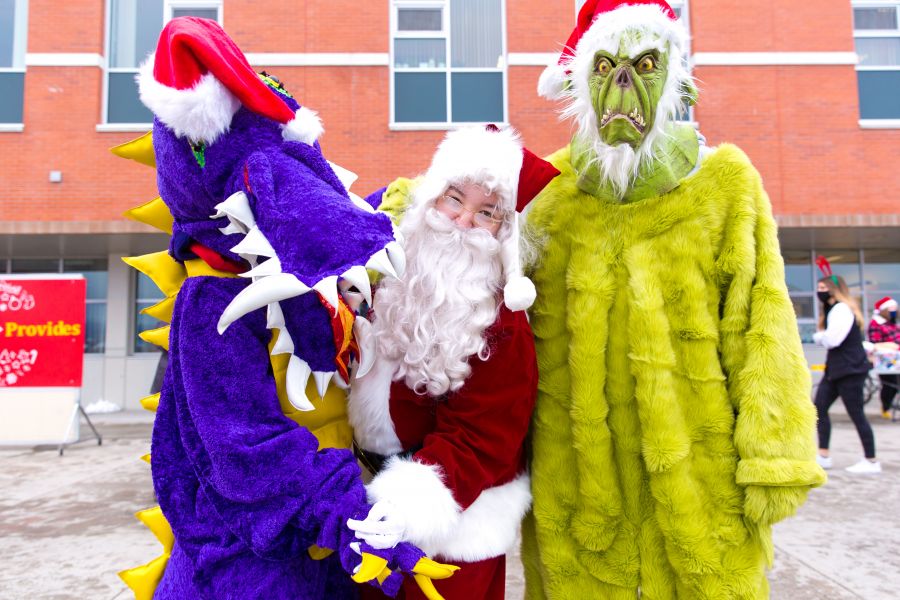 "In Princeton, they have three schools now working out of one school and the secondary kids are only going part time. So I reached out to the admin and said, 'Hey, we've got students over here that are doing this great program. Do you want us to support you in some way?" 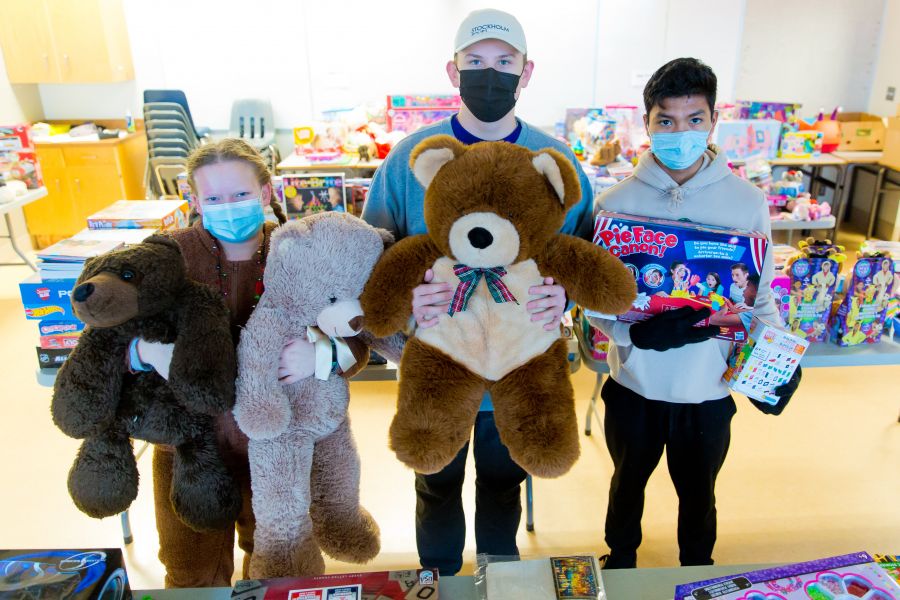 The answer didn’t take long, and this morning as the drive-thru action wound down, eight Leadership students from Princeton Secondary and a few teachers and parents arrived at Pen High. 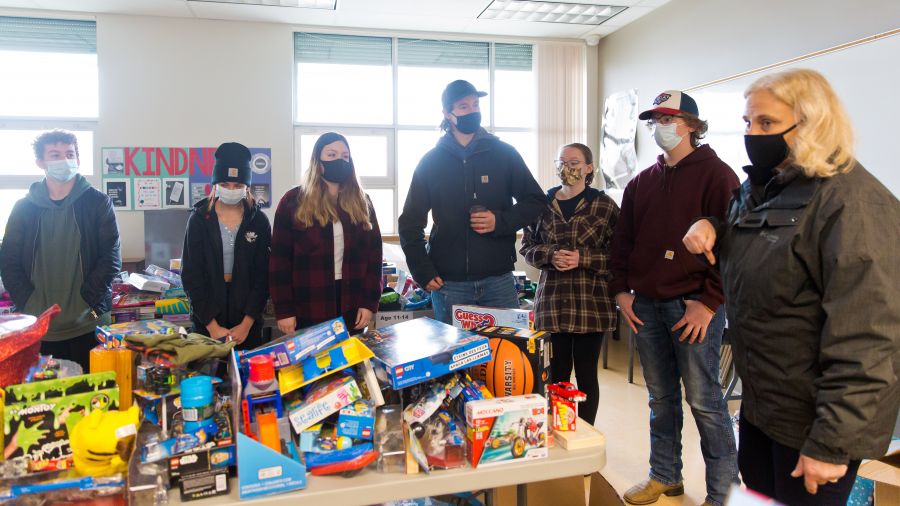 "They’ve come today so we can help them fill up some of their Christmas hampers for families in need in Princeton," said Richardson. "We want to empower those students to do things in their own community."

Riley Forde, who along with buddy Mike Keyworth came to Penticton today after spending much of the past few weeks sandbagging and helping deliver food to those who need it, was succinct. 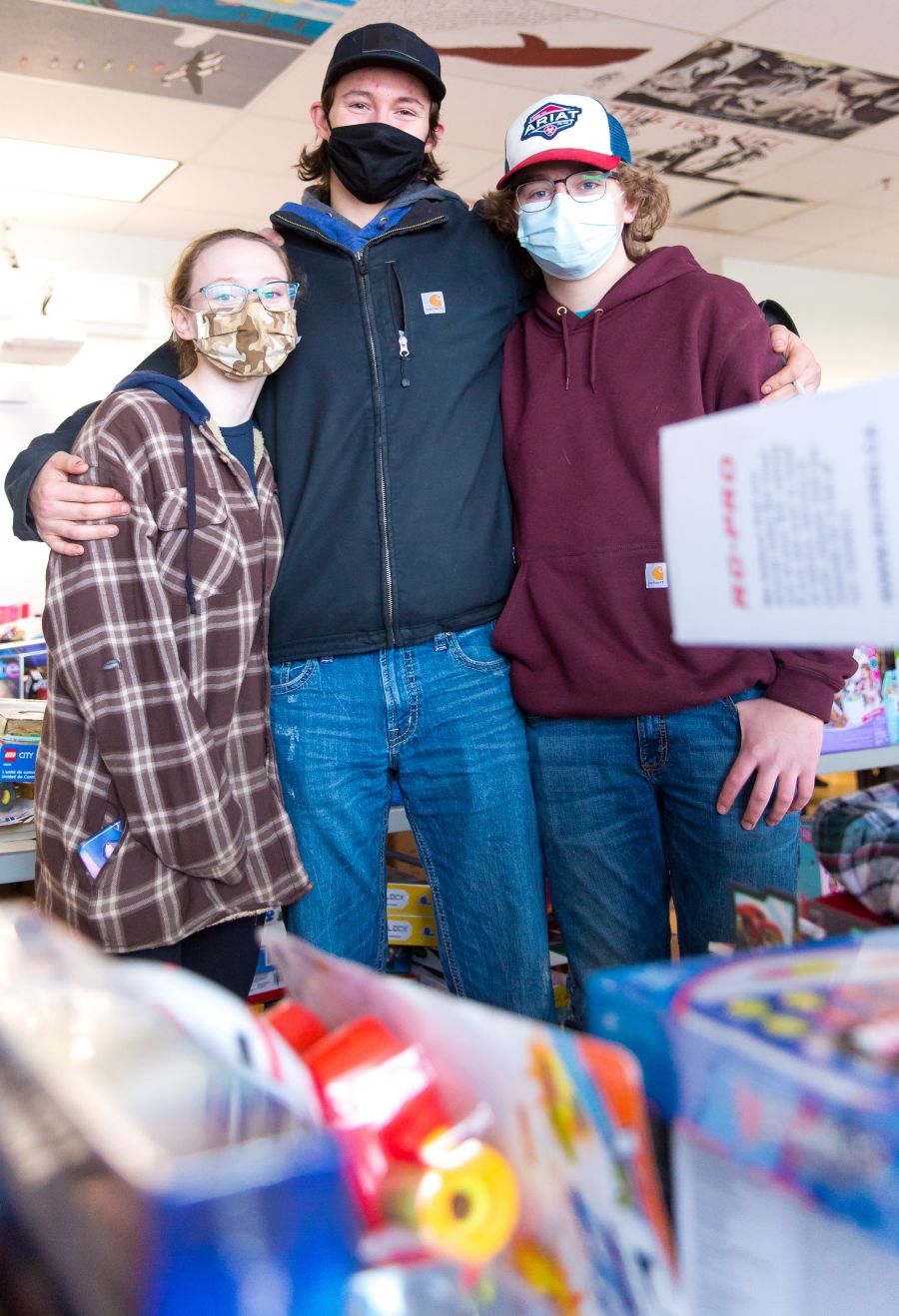 "Penticton Leadership reached out to us with this amazing opportunity to get toys and food for our community. And we were, like, we're on our way."

Keyworth, who confirmed that Princeton's entire student population is now sharing class time in the only building that's currently safe to inhabit, added that the "craziest thing now in town is having all that traffic. The Coquihalla is down, so it's all coming through Princeton. And more accidents are occurring. It's affecting the town in more ways than I thought it would." 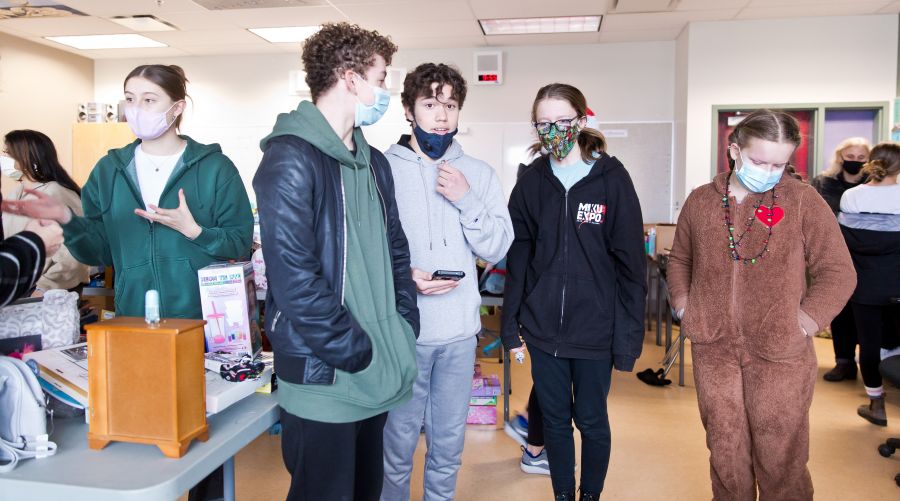 As for today, Keyworth looked to be all smiles behind his mask.

Within just a few minutes of their arrival, the Princeton kids and Penticton kids were sorting through toys in the classroom where they were stashed. There was box after box of food and supplies too, and then a little added drama. 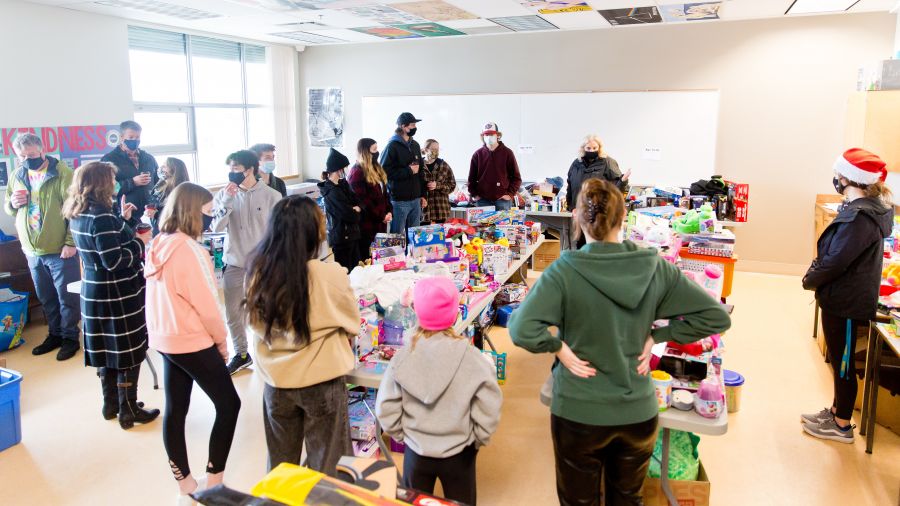 It was trotted in through one of the doors as everyone was checking out the toys, and then suddenly it was there for all to see. A giant-sized $2,000 cheque, from Pen High Leadership to Princeton Secondary. 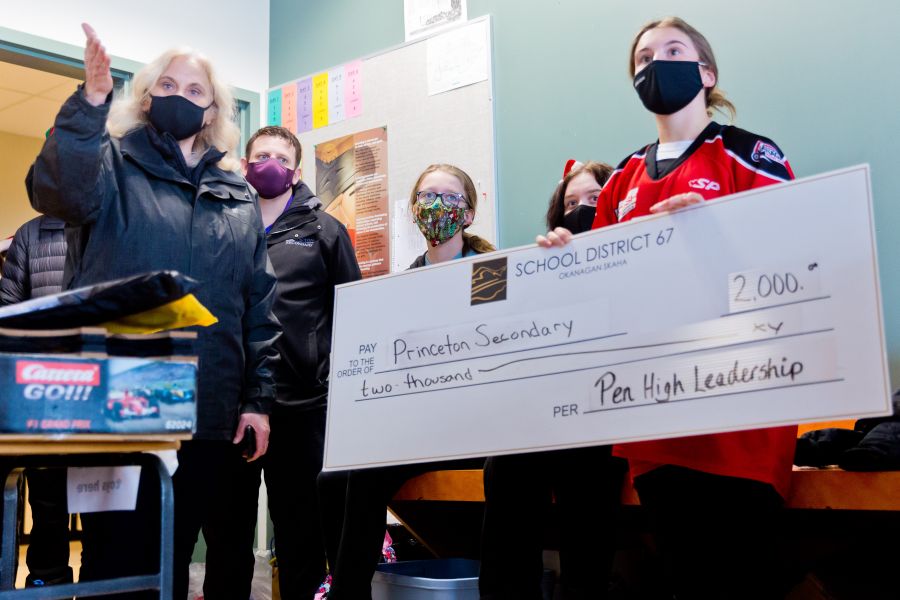 "Our building itself never got flooded," she said, "but we're on a do-not-consume order so we can't safely bring kids into our school. So now all three schools are sharing one building.

"Our high school goes to school four afternoons a week for two hours. Two weeks we weren't in class at all, then one week online. Now we're combining virtual learning with in-person." 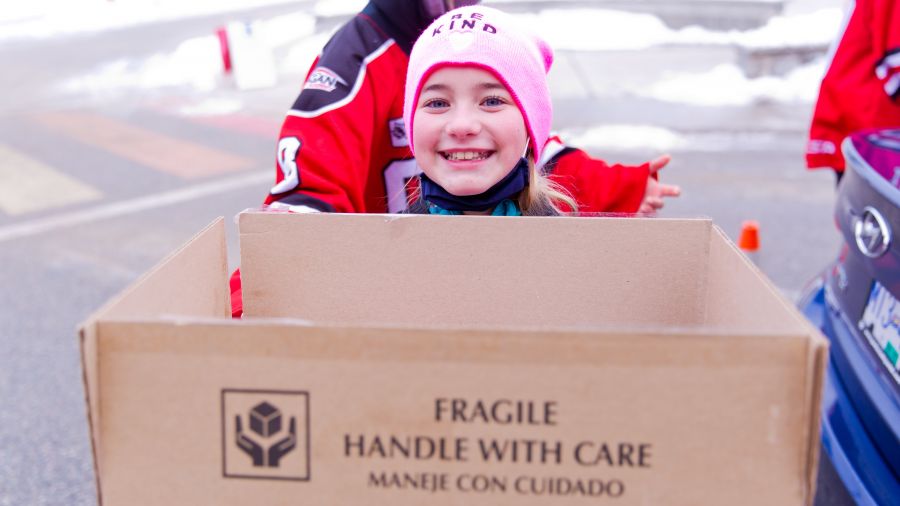 And she agreed with Keyworth. Two Princeton students -- Gabriel and Noah -- were walking around with permanent grins. 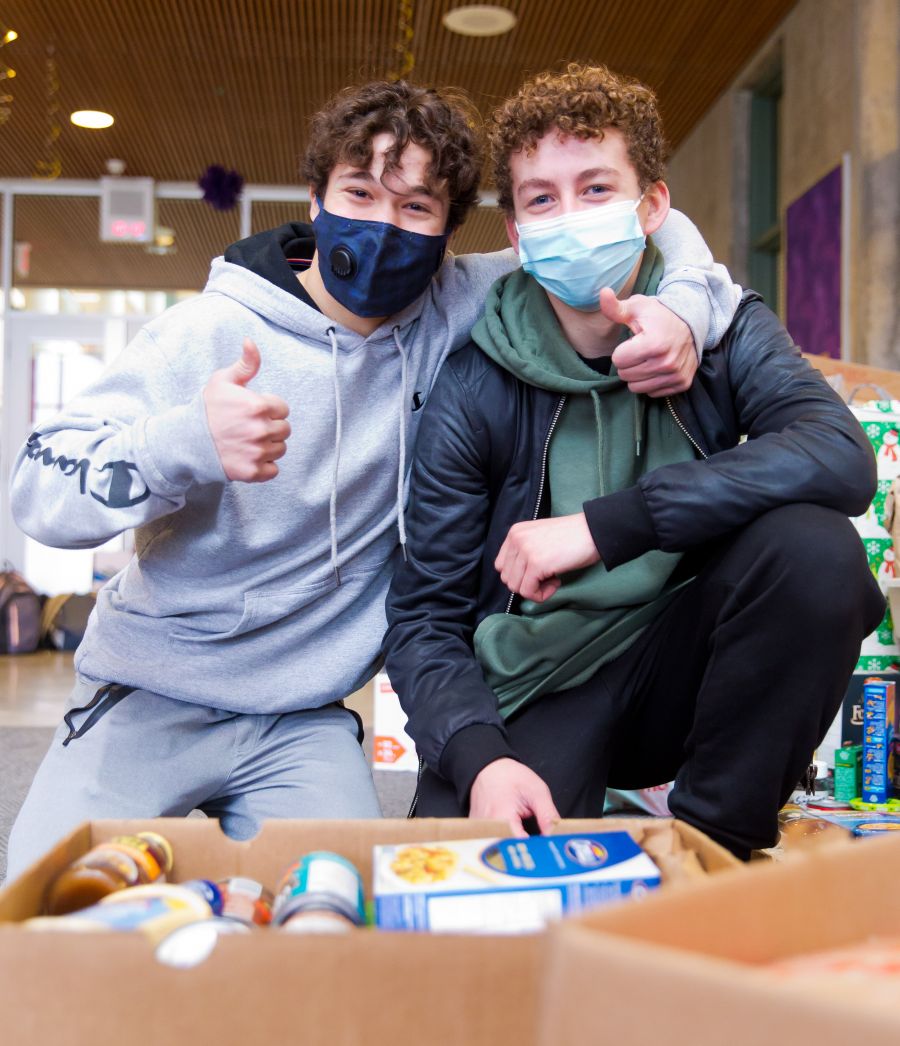 "To be honest," said Gabriel, "this is one of the coolest things I've ever seen. I love seeing how each town helps each other out when something bad happens. It makes me happy."

The two agreed though that the flood was "devastating," saying that in the beginning there was no heat, no electricity and no potable water. "Half of our town was washed away," said Noah. "People were…scared."

For Pen High students like Emily Mottershead, who said as today's drive-thru ended that 1926 toys had already come in 2021, today was not only about the Princeton students, it was about the big picture. 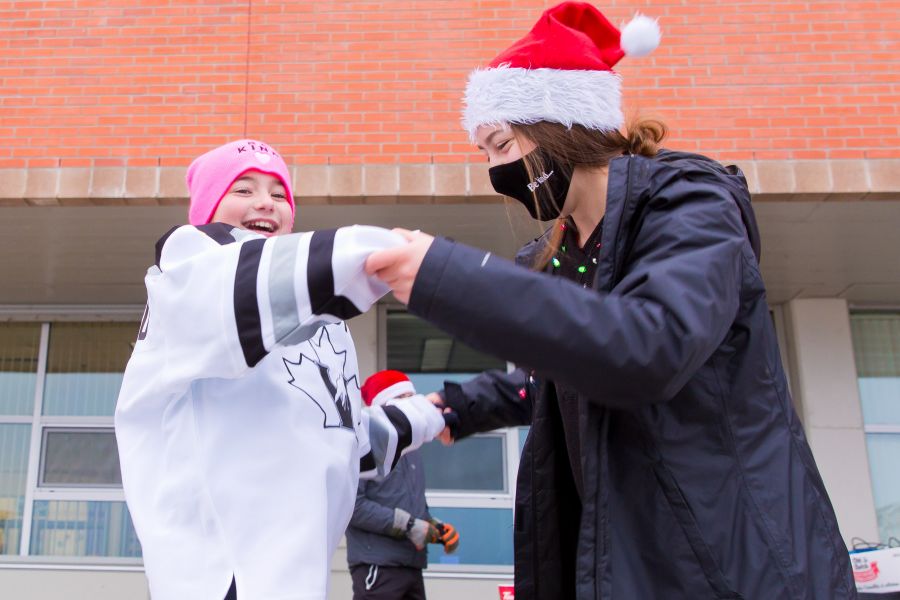 "Last year was the first year for Penticton Provides," she said. "I've been planning it for four months now. Contacting businesses, drawing diagrams for the drive-thru. It's just generally giving to the community and being a big help for those in need."

"I really like the leadership program. It's my motivation for school." For more information on Penticton Provides and Toys for Tots to Teens, or to donate money or goods, go to the website here.