Jean-Marie Relitz is no stranger to floral displays. She sees a lot of them in her day to day job at Front Street florist Carl's Flowers. But this year, she had a vision for the shop's front window that would outdo anything she's ever concocted. 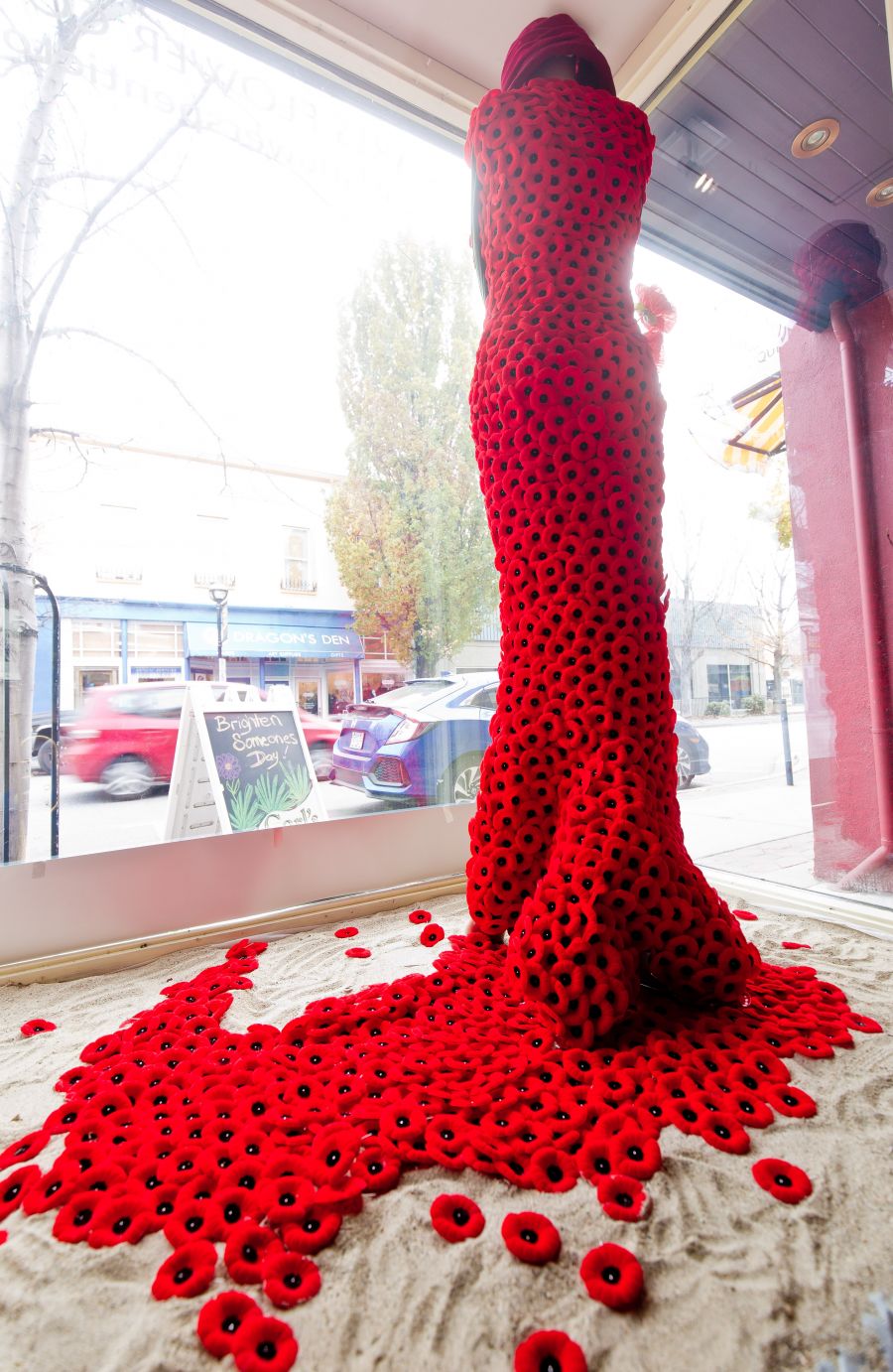 "I just wanted to do a really cool tribute to our veterans because they've given so much," she said earlier today. "I wanted to do a Remembrance Day-themed window that would represent those who are waiting for their loved ones to come back from war. And to those who didn't make it back."

So she called the Penticton branch of the Royal Canadian Legion. And they happily agreed to help out. 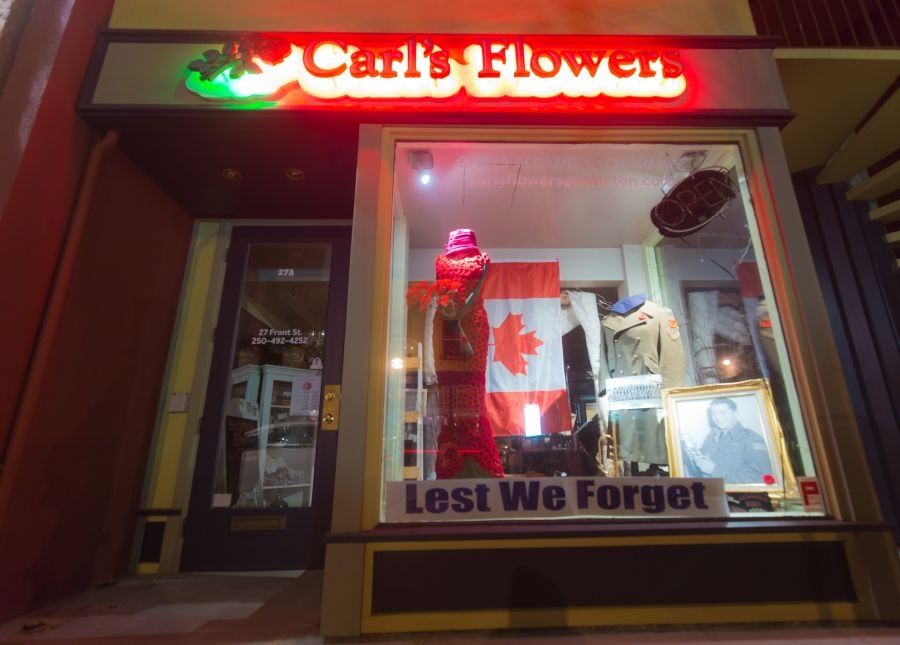 "I asked them to bring down some memorabilia for a window display. And I asked if there was any way to get some poppies. And when he brought down a whole box, I was really excited. I could now do my idea."

The focal point of Relitz's concept was a dress made of poppies. And not just any old dress. A full-length number, with a train splayed out on the floor underneath it.

"So I sent my co-worker out. I said I wanted a dress. A long dress. So she went to the thrift stores and found one. And it was perfect." 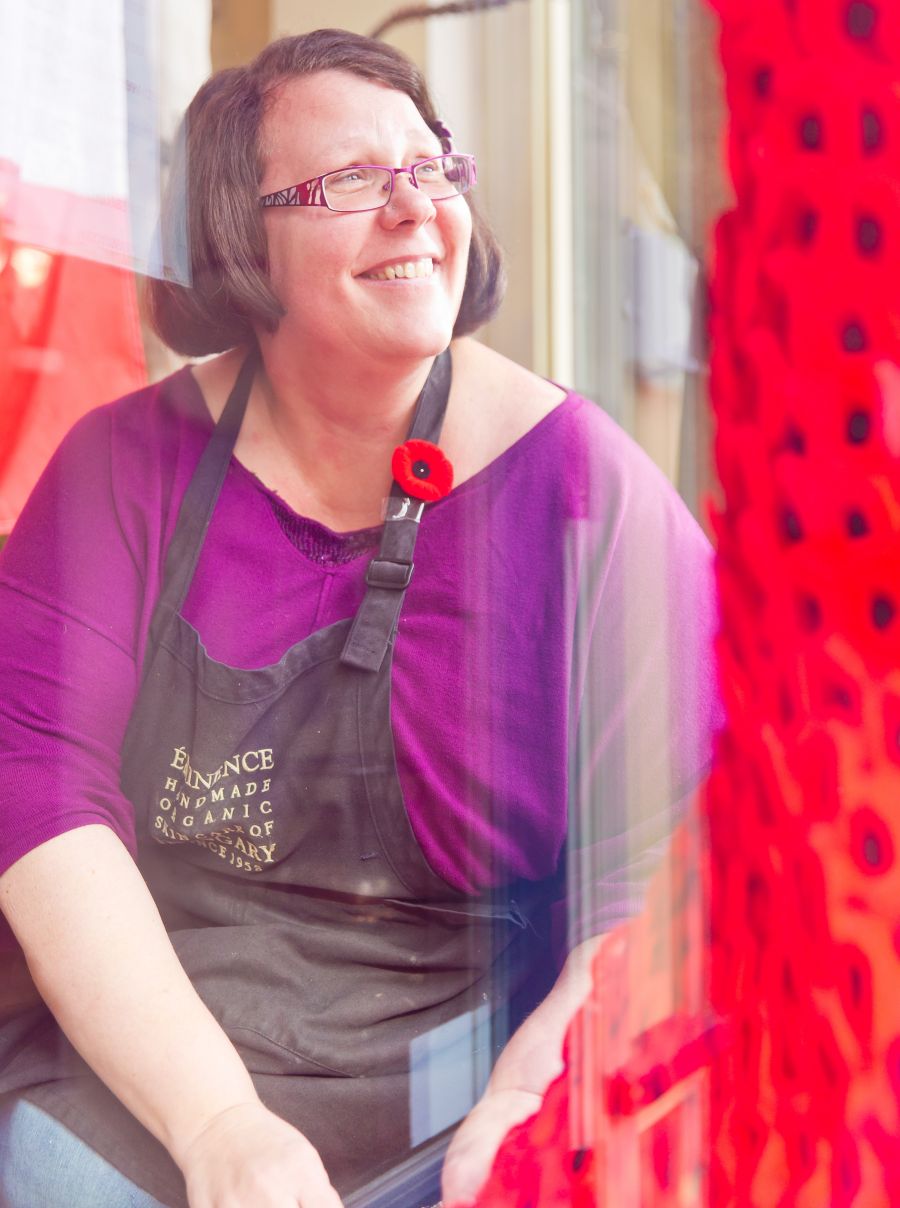 And Relitz started pinning poppies. Six hours and 2,000 poppies later, the centerpiece of her display was complete.

That it's stunning is an understatement. Perhaps most impressively, she cleverly worked around the fact that the thrift store dress had no train. She built one freestyle by pinning poppies to poppies.

Also part of the display is a uniform, a trumpet, a few photos, and a big Canadian flag as a backdrop. It's beautiful and it's poignant. 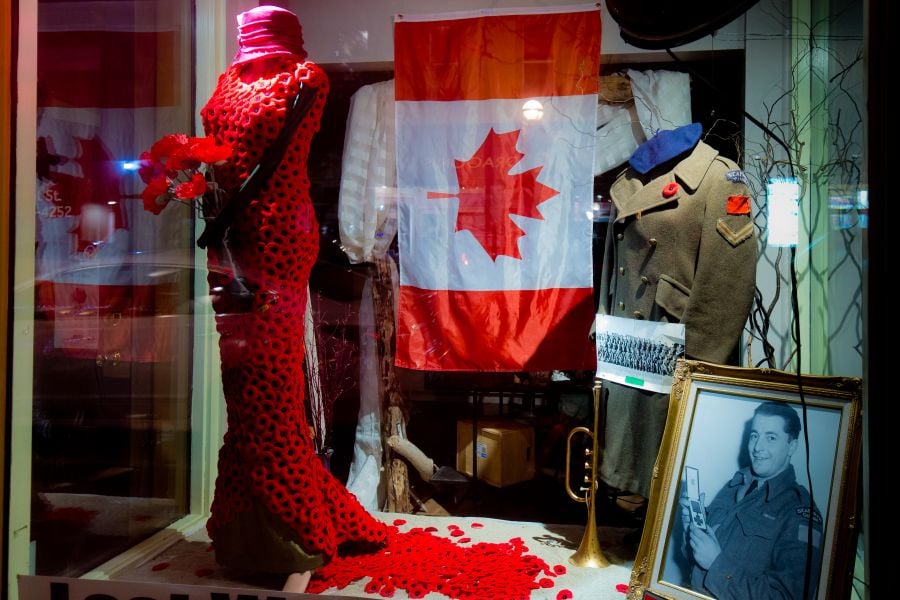 "I moved here two years ago from Alberta, and Wainwright is right next to where I live. They have a large military base there. And I've seen things like this before. I wanted to make a statement."

Relitz said there's been no shortage of folks dropping by to take a look or snap a photo. And that's just what she wanted. "We even had a veteran stop by and ask for a picture that he would print and display at Charles Manor (Retirement Residence) for their Remembrance Day ceremony." 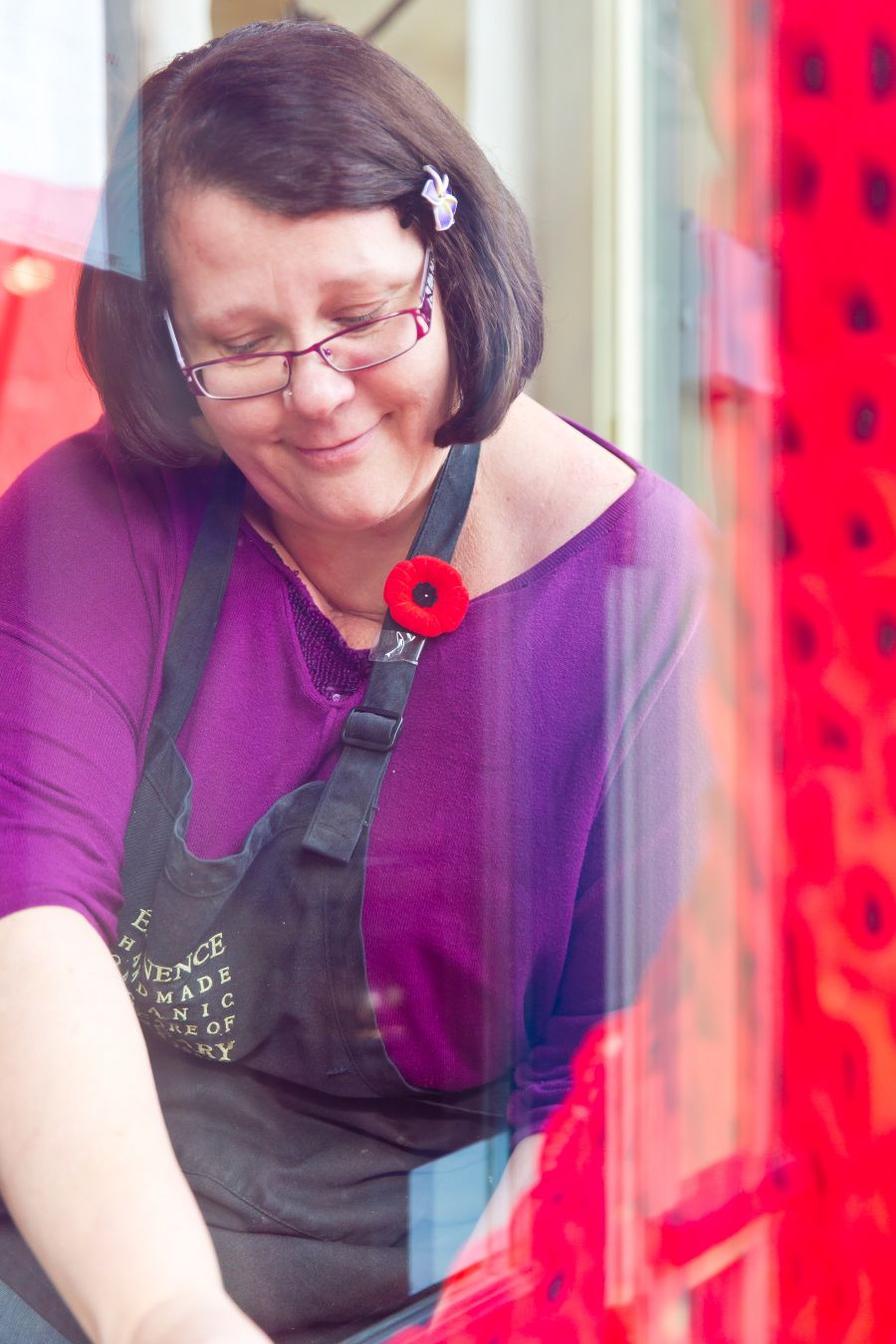 And she already has poppy-centric ideas for next year. "I was thinking of doing something with crosses, an old military helmet, boots, that sort of thing."

Carl's Flowers is at 27 Front Street. Relitz says it looks best after dark, when street reflections are reduced. 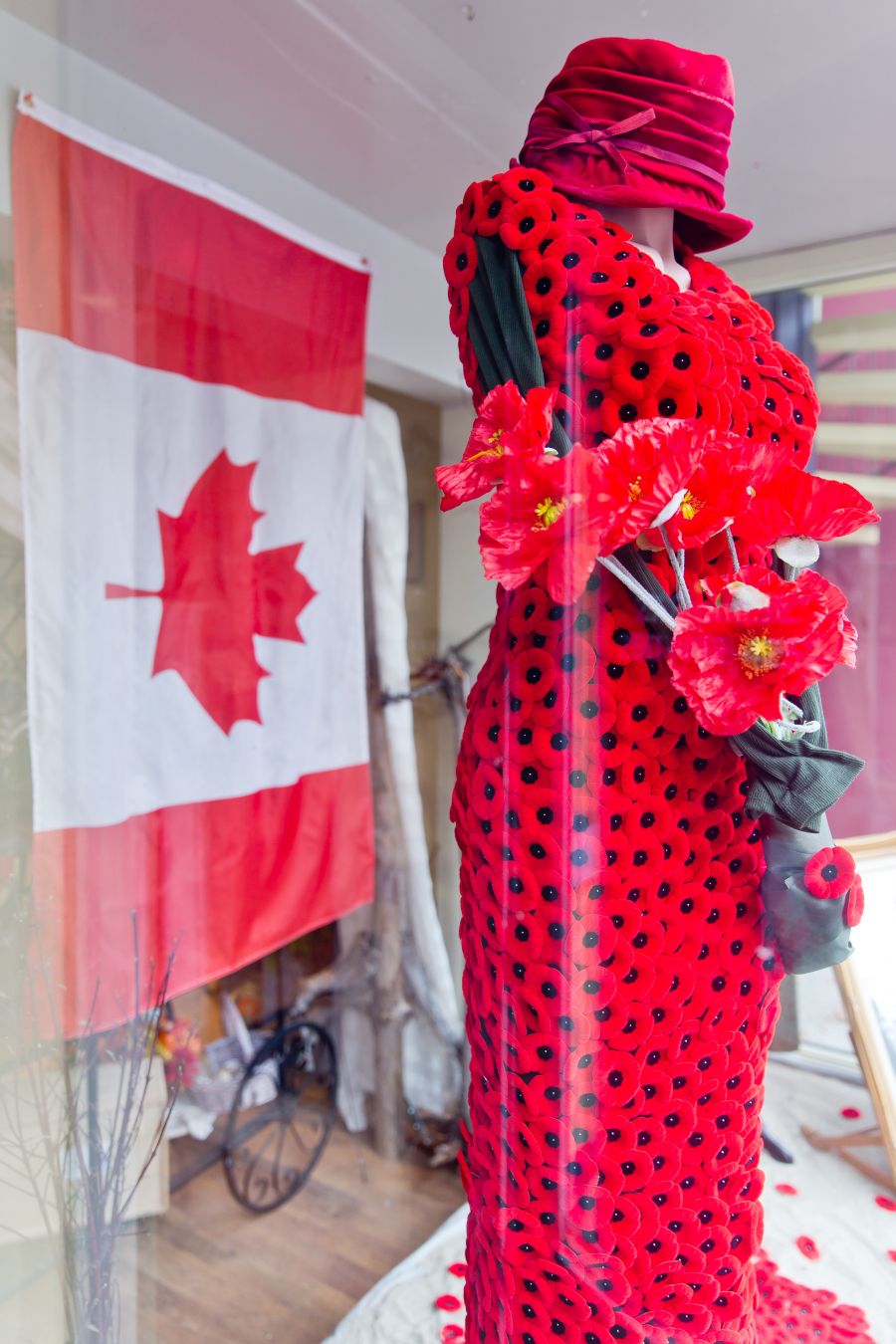