KVR's McCulloch Trestle, just north of Munson Mountain, is getting a new deck

McCulloch Trestle, just north of Munson Mountain on the KVR Trail, is one of the busiest foot and bike bridges in the region. It's also one of the most scenic and most photographed spots on the entire KVR. And this week it's getting a new deck.

Built in 2002 and named for Kettle Valley Railway chief engineer Andrew McCulloch, the trestle has recently been looking a bit ragged. Frequent travelers will know that many of the deck's pressure treated timbers are now rather seriously warping, cracking, and shrinking. Various makeshift patches have been put in place, but they look decidedly makeshift and one in particular was installed an inch or more above grade, thus giving a nasty jolt to passing cyclists.

There have been numerous instances of extreme profanity.

Mauricio Cepeda of the City of Penticton Parks Department was one of four workers on site today when PentictonNow wandered by. 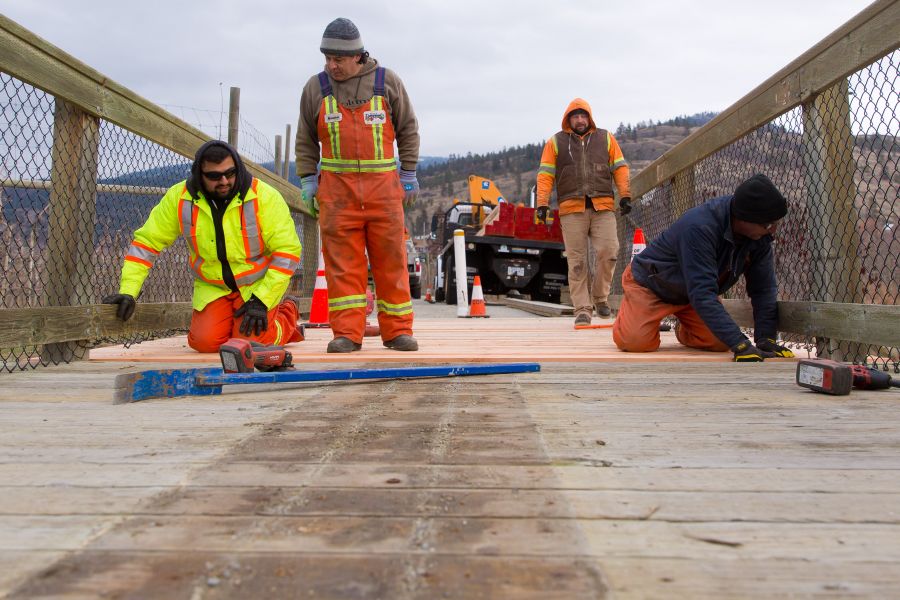 "Yesterday we started with the layout," he said, "and today we're starting to replace the boards. We're going to replace all the timber on the deck."

"It's for safety reasons. The boards are getting old, and they're shrinking. Then its gets uneven, and the trestle becomes a tripping hazard." 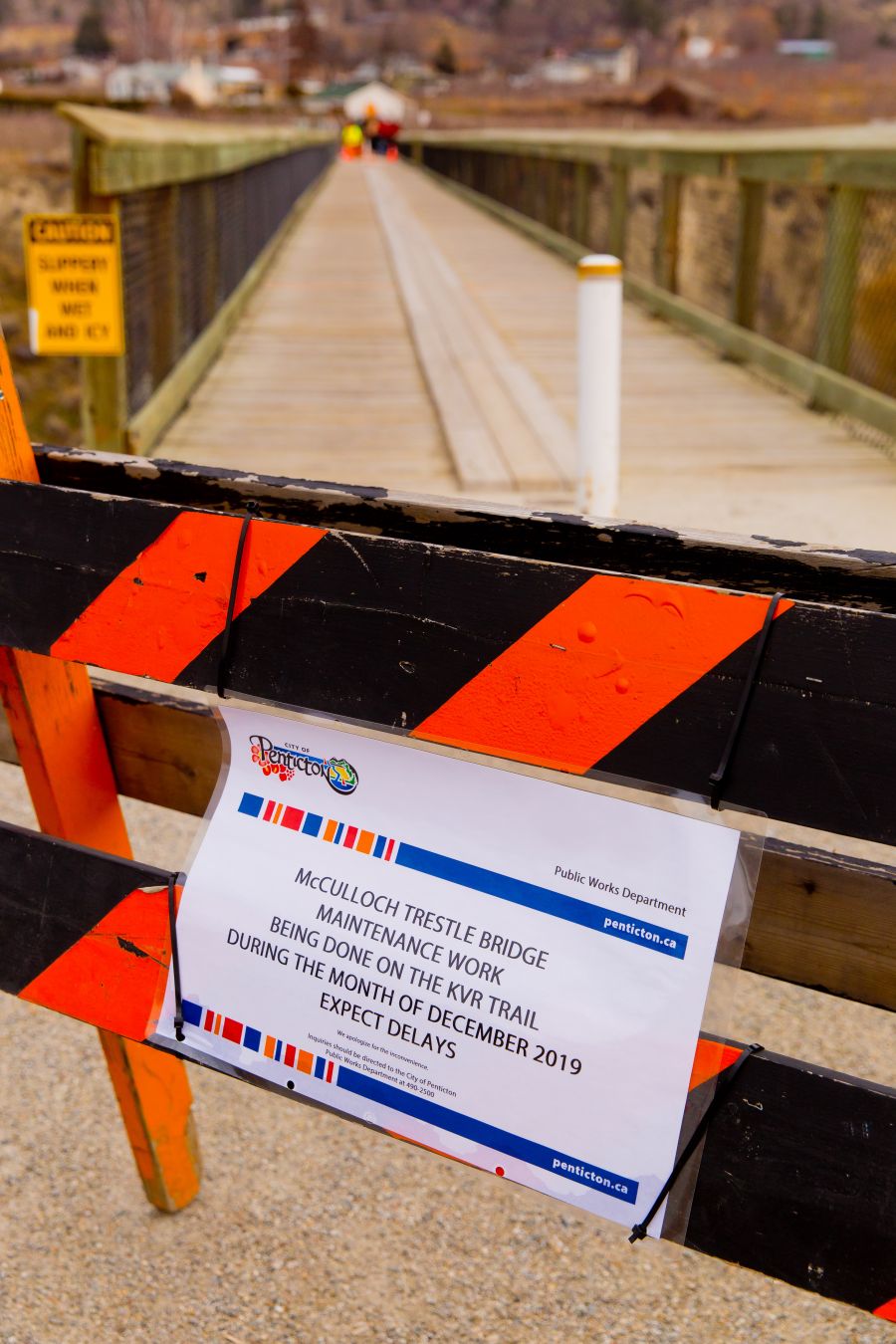 Cepeda showed us one gap that had now reached a couple inches. He also taught us something. Those boards that run from one end of the trestle to the other, lengthwise, effectively dividing the surface in half, aren't intended as a bike lane. They're engineered to help keep all those timbers underneath level.

They're being replaced too. 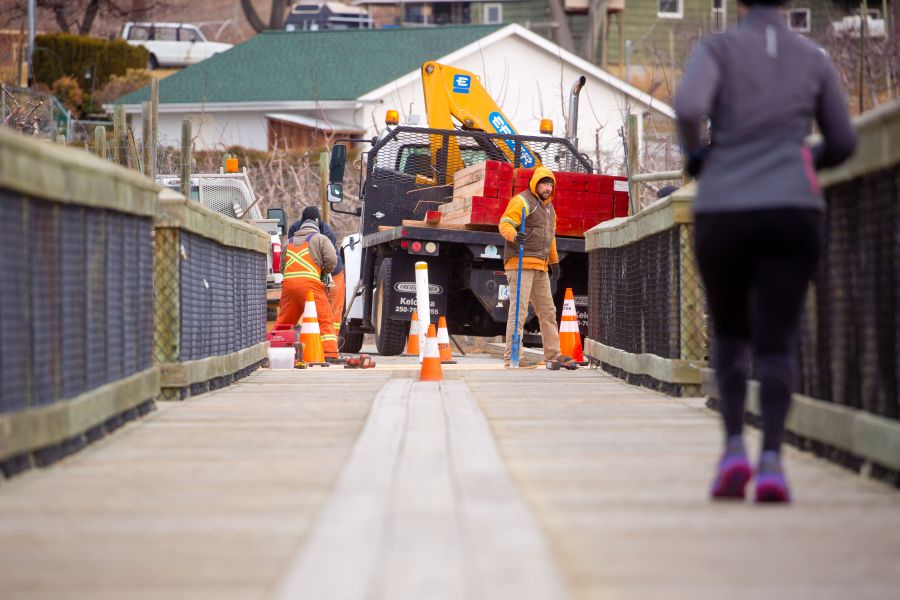 The McCulloch Trestle deck upgrade will continue every day this week from 7:30 a.m. to 4 p.m. It's expected to end Friday, though that date could be pushed back if the crew is called away to assist in the event of a major snowfall.

In the interim, trestle users are advised to tread carefully and expect delays. 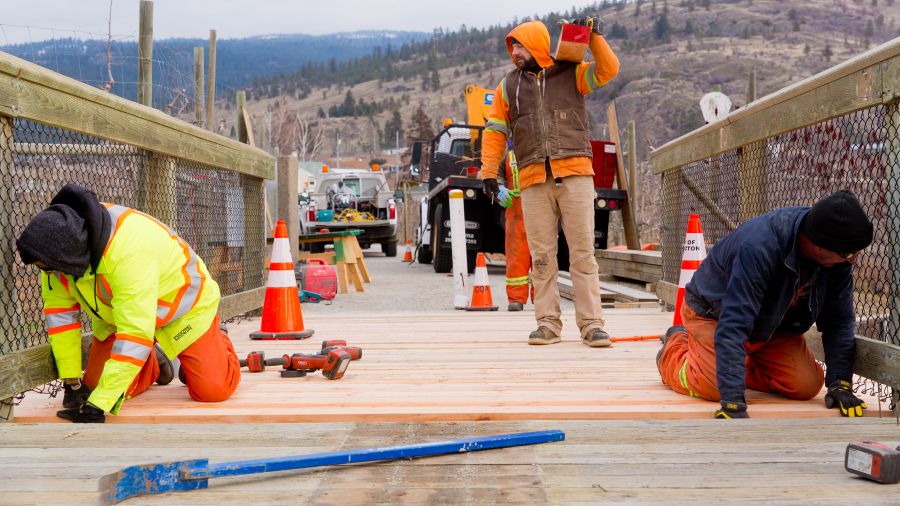