Winter solstice. The longest night and the shortest day of the year. A time when pagan tradition meets fact-based science. An occasion that's been observed by humans far longer than Christmas and, unlike Christmas, is celebrated globally regardless of religious affiliation. 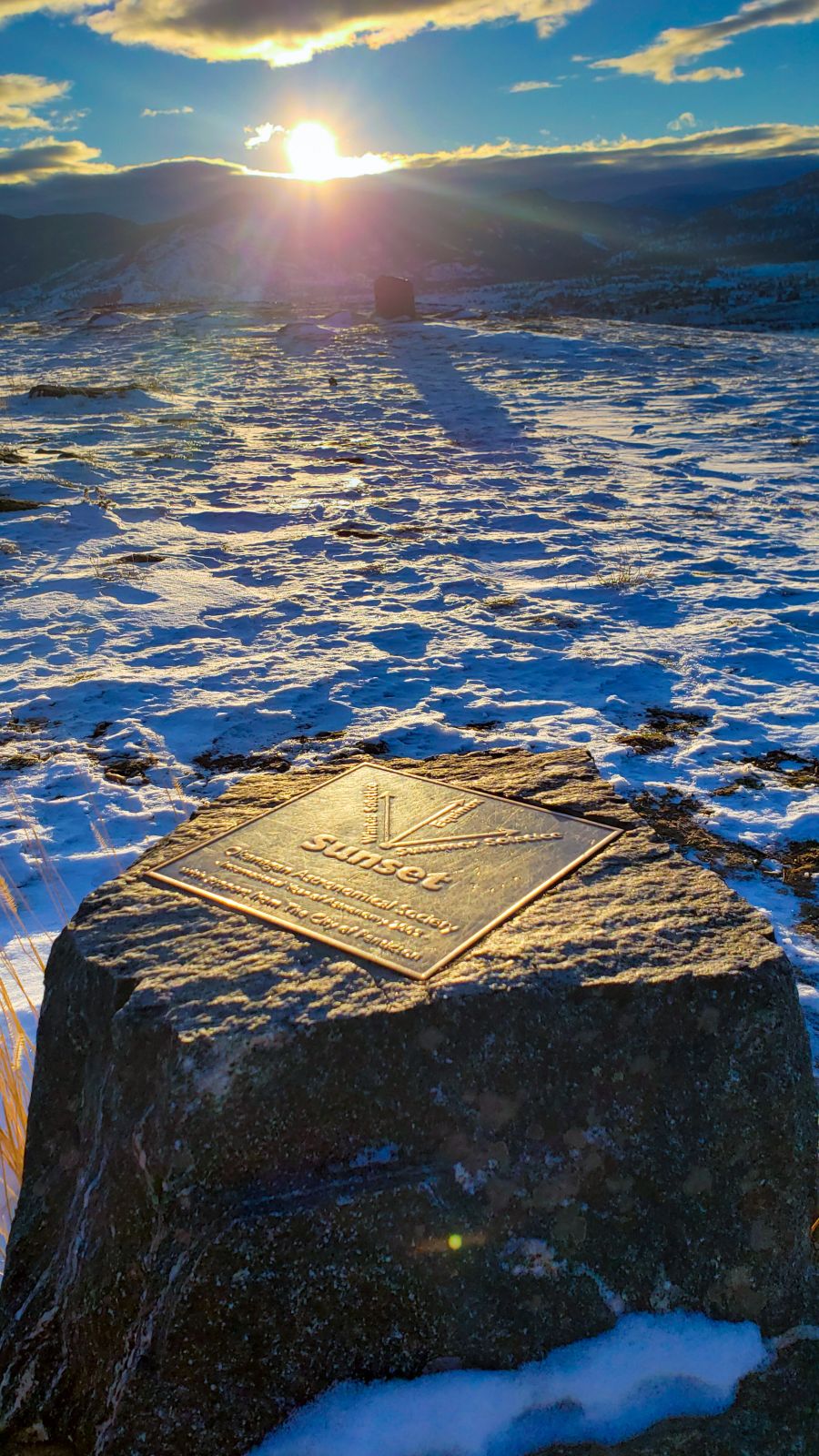 Winter solstice 2021 happened Wednesday, and from now through the June 21st summer solstice, each successive day will boast more daylight hours and shorter periods of darkness.

Is that a reason to celebrate? Yes, and that's precisely what millions did yesterday across the planet. 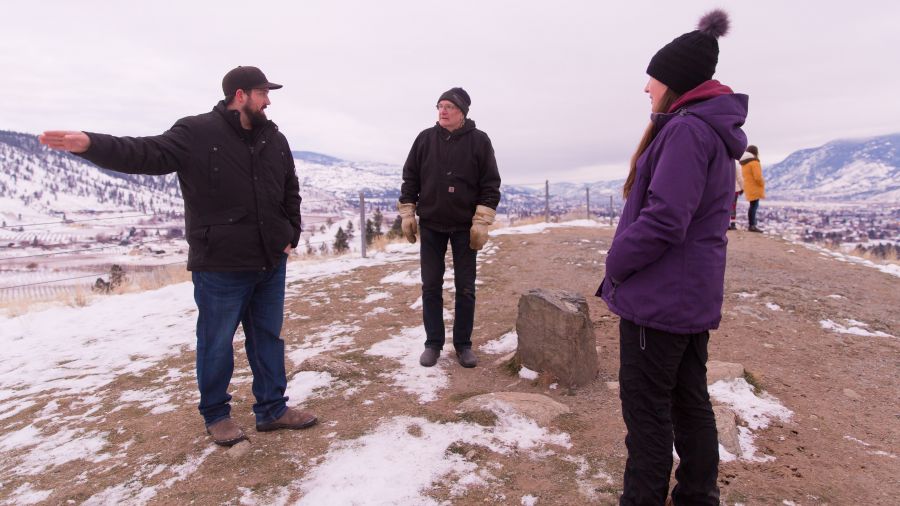 Some were more pandemically responsible than others, with perhaps the naughtiest behavior of all reserved for England's illustrious Stonehenge stone array, where a thousand-plus peeps wantonly defied pandemic mandates to show up and group en masse.

Meanwhile here at the Okanagan Stonehenge equivalent -- Munson Mountain's nifty "Pen-Henge" -- the pandemic played a more dominant role. The annual gathering at the peak was canceled for the second year running. 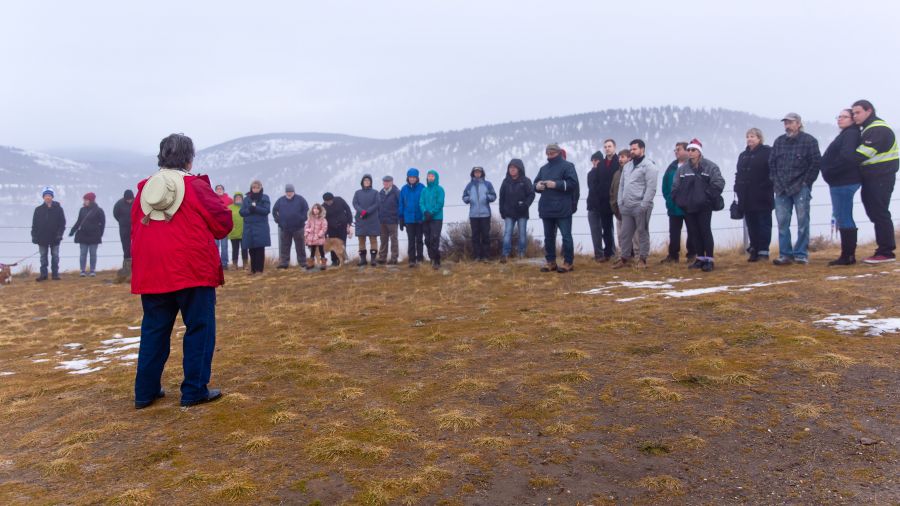 But that didn't stop folks from making the pilgrimage to the top throughout the day, checking out the stones, and, if they crossed paths, wishing one another a "Happy solstice."

PentictonNow did the deed at sunset, where we ran into the architect of Pen-Henge, the dude who conceived of the stones and played a key role in transporting them to the top back in 2009, retired Dominion Radio Astrophysical Observatory scientist Chris Purton.

Purton's no stranger to his creation. He makes the trek at both solstices and at both equinoxes too. And yesterday he chatted with us as we hiked up and down. 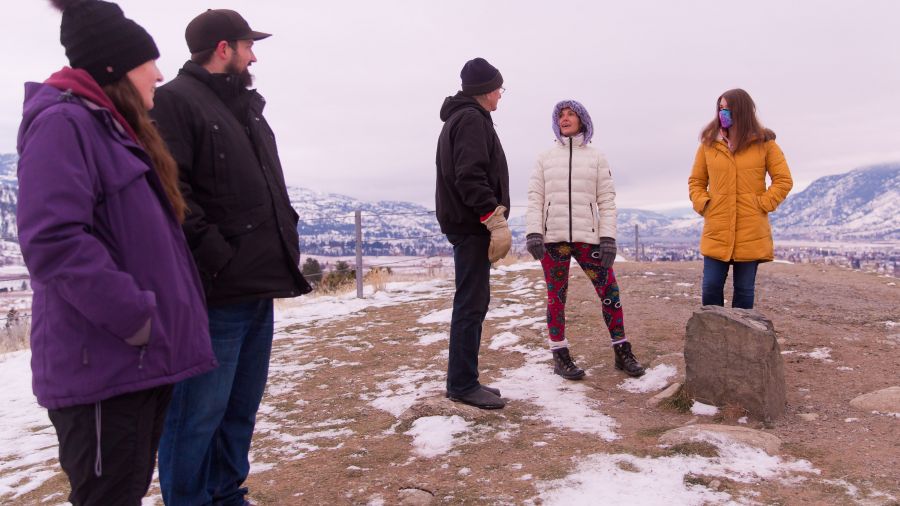 "Christmas, I think, has been wrecked by the commercial world," he began. "In our family, we tend to go for the Dickens 'Christmas Carol' description of Christmas, were it's a time for family and unity and expressing all the sentiments that Jesus emphasized without being particularly Christian about it."

That’s a lot of thoughtful verbiage when you’re hiking a steep slope, but Purton had clearly set himself up for a big conclusion, and we didn’t stop him. 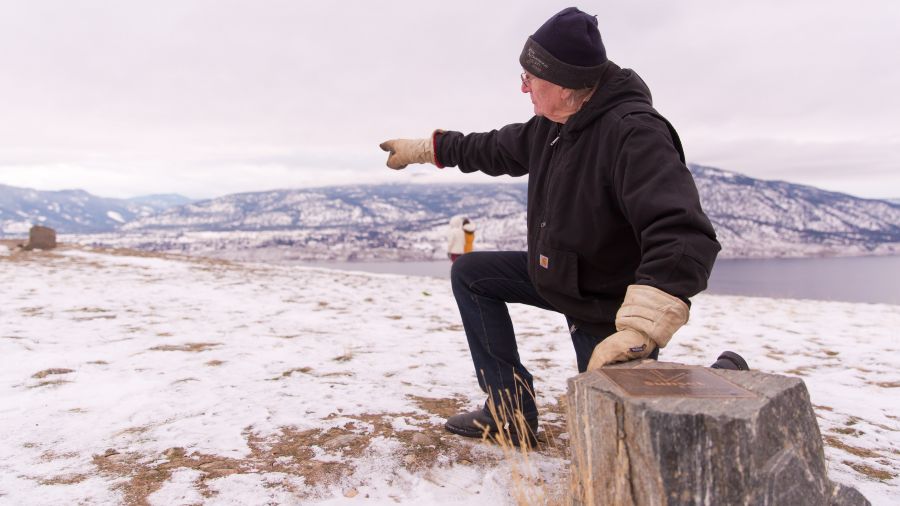 "And remember that Christmas is on the 25th of December," he continued, "because the early Christians grafted it on to the solstice celebrations in the Roman empire. So it is related to the solstice in that way.

"So several years ago, when we got into this (creating Pen-henge), I realized that what we were doing was taking part in an ancient tradition. All these cultures and there's one thing they all agree on -- solstice. Things are going to get better. The sun will return. It hasn’t gone forever."

In a few minutes, we were standing at the Pen-henge "heel stone" -- the big rock that acts as the monument's focal point.

If you stand directly behind the heel stone and follow the arrows on it and look toward the other stones in the array, you'll spot the exact location where the sun sets behind the western mountains at both the summer and the winter solstices. 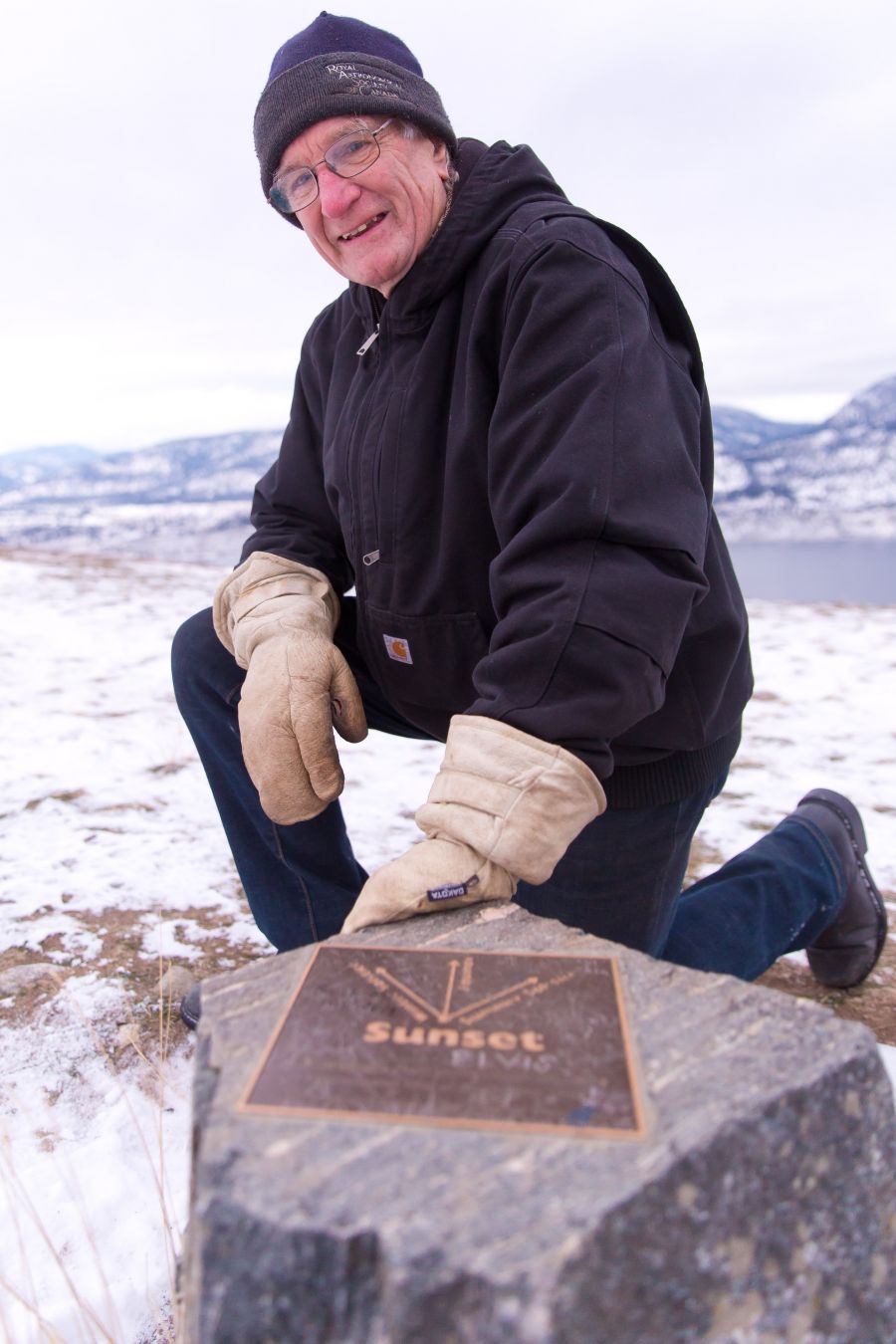 "The whole year of sunsets is encompassed between these two stones," said Purton rather majestically.

The one downer for those who love the idea of a return to short nights and long days is that daylight advances only fractionally at first.

"It's only a few seconds per day right now," said Purton.

"It’s a sine curve, and you're at the bottom of that curve where it’s flat. A week on either side of this day and you'll have great difficulty noticing any difference at all, but at the peak, at the equinox in March, the days lengthen by several minutes each day." 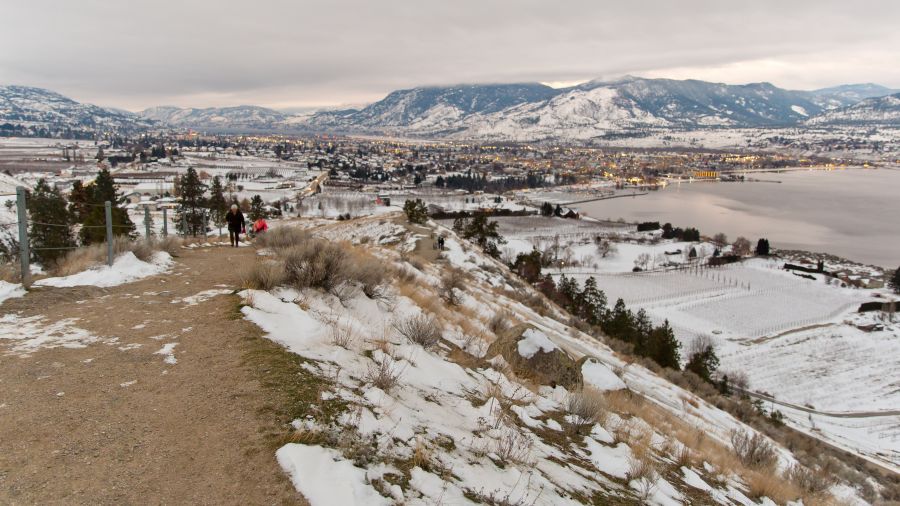 Purton's solstice-inspired creation has apparently also helped him solve the riddle of which solstice is the most trendy.

"When we started this," he said, "I thought the summer solstice would be the most popular. The weather is better, there's no snow. But it's not. The winter just seems to mean that much more to people."

Two of those people are Penticton newcomers Chelsea Ealey and Trevor Cieszecki, both of whom hiked the peak Wednesday solely because it was the 21st of December.

That they got a chance to yap with Purton was a happy bonus. 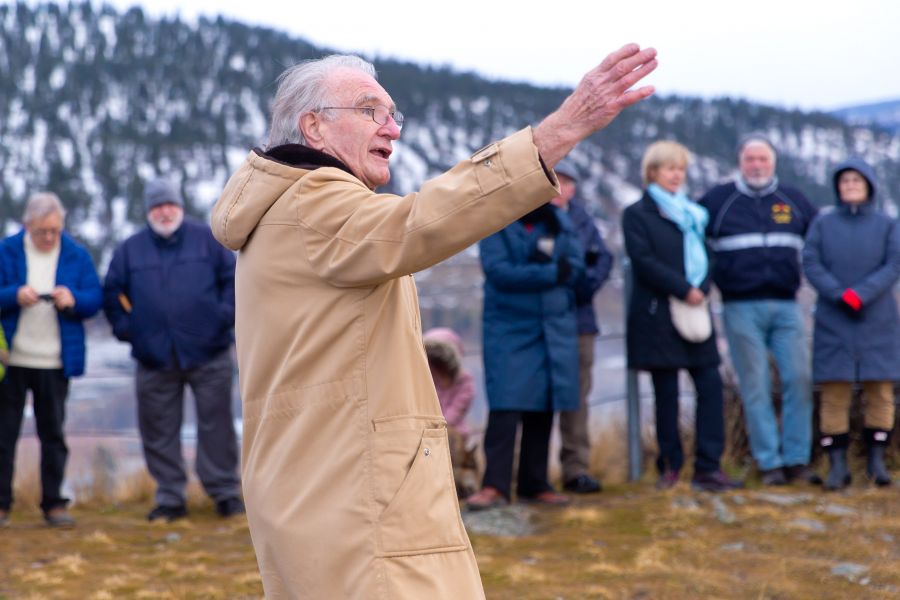 "We're here for the winter solstice," said Ealey. "I wanted to come here last year and it didn’t work out but then I remembered and made it this year. This is my favourite spot in the whole world."

"This is my first time actually up top here," said Cieszecki. "It's very cool to be here." 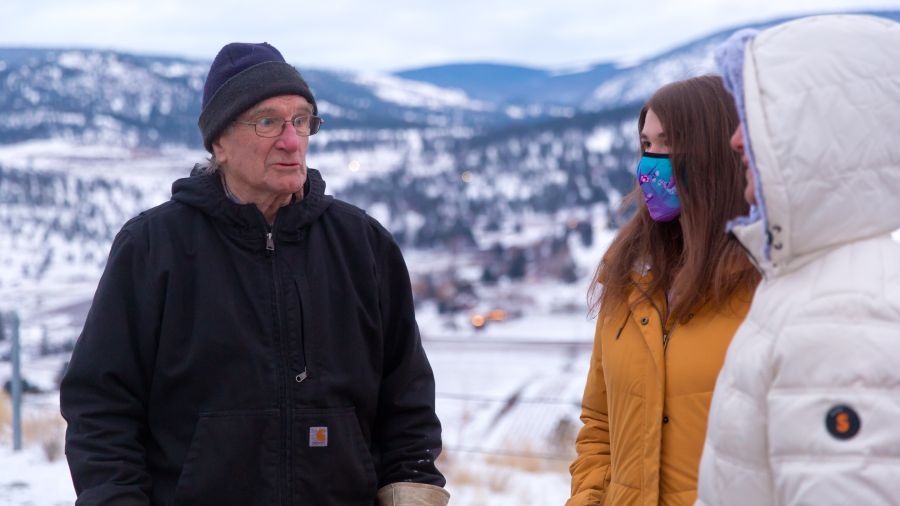 "We're here for solstice," said Wheaton. "I was here for the sunrise today and I'm here for the sunset too. Stargazing and the position of where we are in the cosmos has been a part of my life for as long as I can remember."

According to Wheaton, who somehow also took a dip in Okanagan Lake earlier in the day, she typically operates her own solstice ceremonies.

"As a yoga teacher, it's been part of what I do for a very long time," she said. "I do my own ceremony now that gathering has been tougher, but it's nice to get outdoors too. It's really great to come up here and get this slightly shifted perspective on the community." 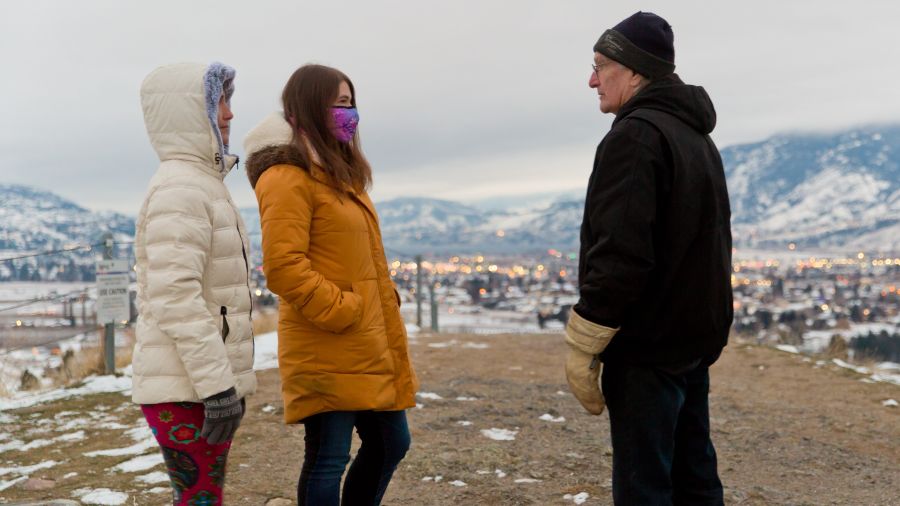 Daughter Albas explained that winter solstice plays a key role in their winter.

"Since I've been little, we've been celebrating winter solstice. It took me years to fully understand it.

"We do gift exchanges with each other, but we focus more on what we need rather than what we want. And we also do a twist with our 'honouring tree,' where we collect goods and offer them to people around the world.

"It's about honouring everyone, which is really what solstice is, especially in winter where it's about gathering when there's not so much light and celebrating together."