There's a lot of stuff that makes the Penticton Scottish Festival unique amongst local events. From the choice of musical instruments -- we're looking at you, bagpipes -- to feats of strength that seemingly include flying utility poles, it's an unusual day. 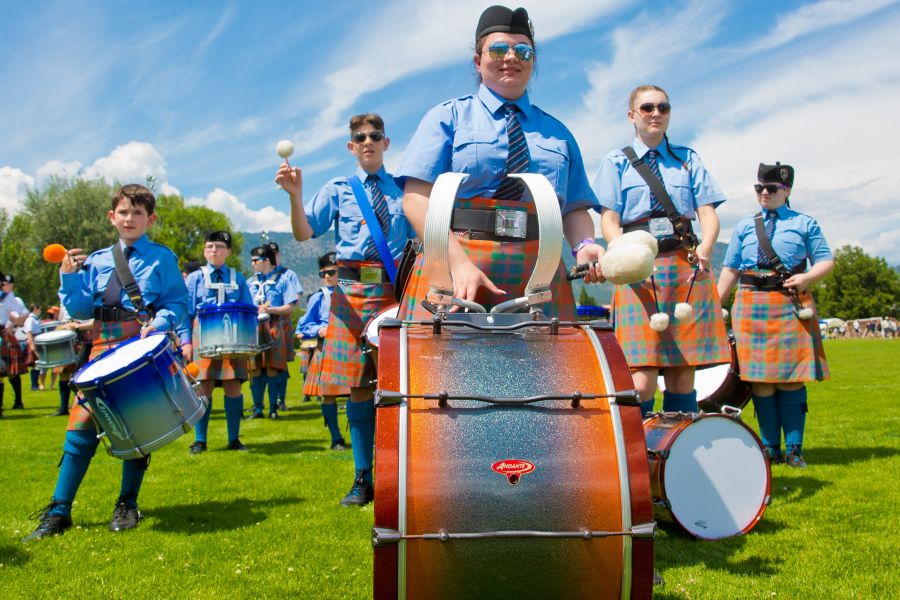 And that's what makes it so awesome. Where, for example, will you find a community event where the number of participants regularly rival the number of guests? 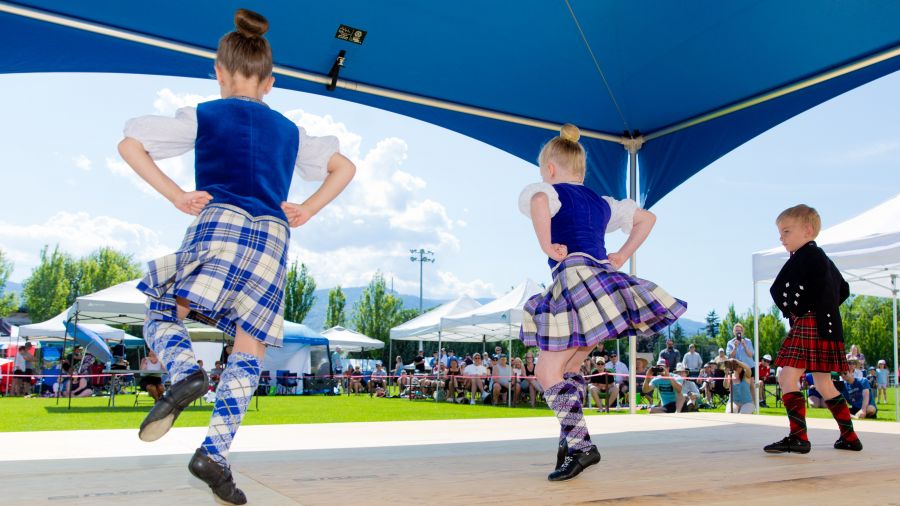 But that's what happens when you have legions of dancers and a seemingly endless string of pipe and drum bands, each made up of dozens of people. 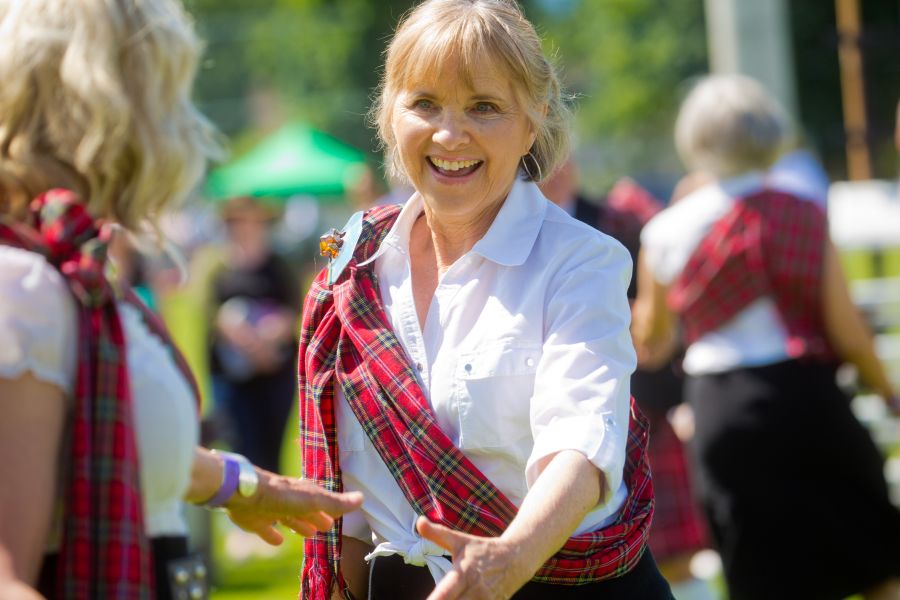 For 2022 -- the seventh annual iteration of the festival and the first since 2019 -- PentictonNow arrived early and spent a little time with the "Heavy Events" folks -- the super-strong men and women who kick off their day when the gates open and toss those utility poles (cabers) and a wide variety of other items into the sky.

And we quickly learned one thing. All those big, strong athletes are gentle, sweet people. They let this photographer hang around as much as he wanted and even posed for pics and advised where to stand to avoid being impaled. We soon found ourselves chatting with the spokesperson, who also happens to be the festival's athletic director and a highly-decorated competitor herself. Beyond all that, she broke ground for women when the world of "Heavy Events" was almost exclusively a male game. 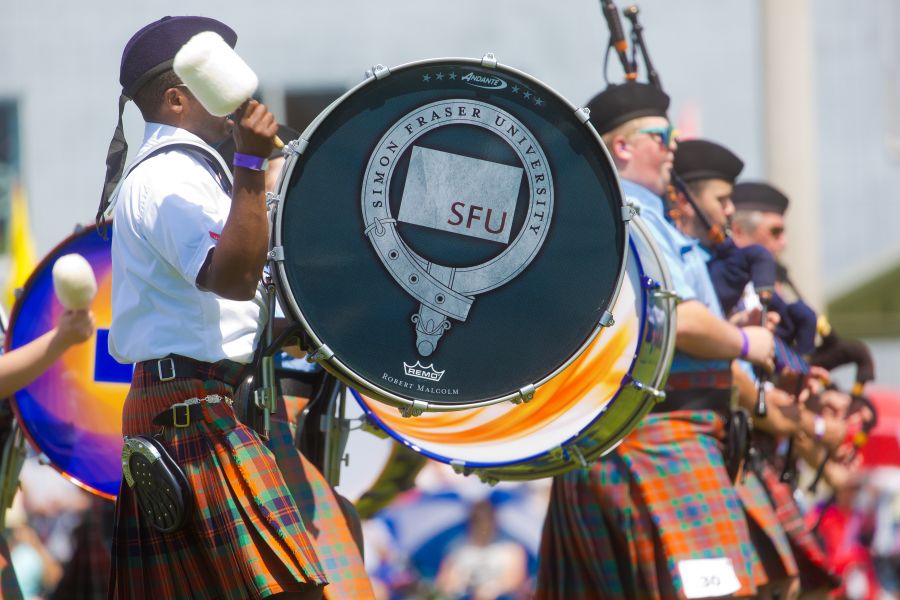 Her name is Karyn Dallimore. Born in Nova Scotia, she now lives in Langley. And she's still competing at a world-class level at the tender age of 58. 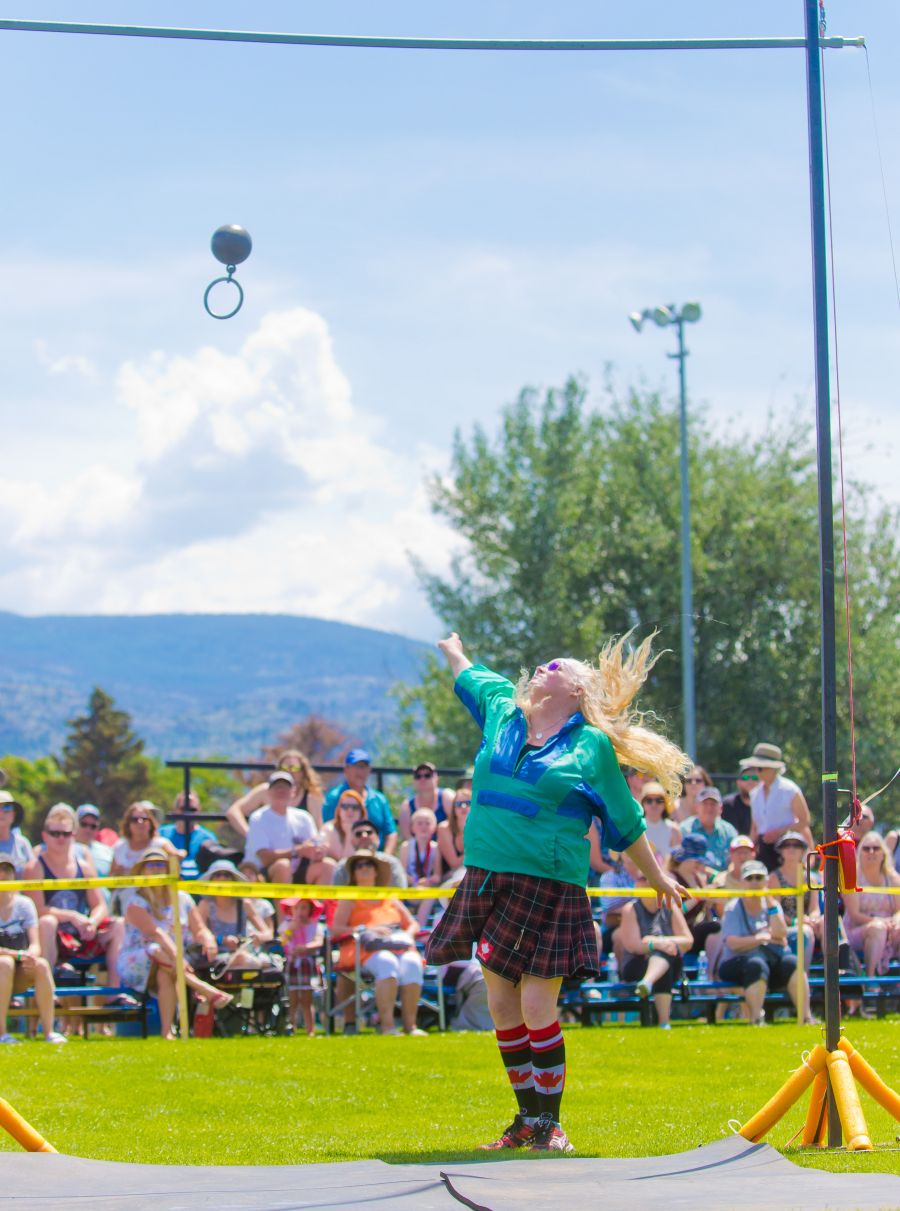 "Yes, this is traditionally a male sport," she said. "At the Braemar Games in Scotland, females still aren’t allowed on the field. And this is 2022. Thankfully, it's not that way in North America."

It was a car accident that originally got Dallimore, who's since risen to become one of the premier Heavy Events athletes on the planet, into the sport. 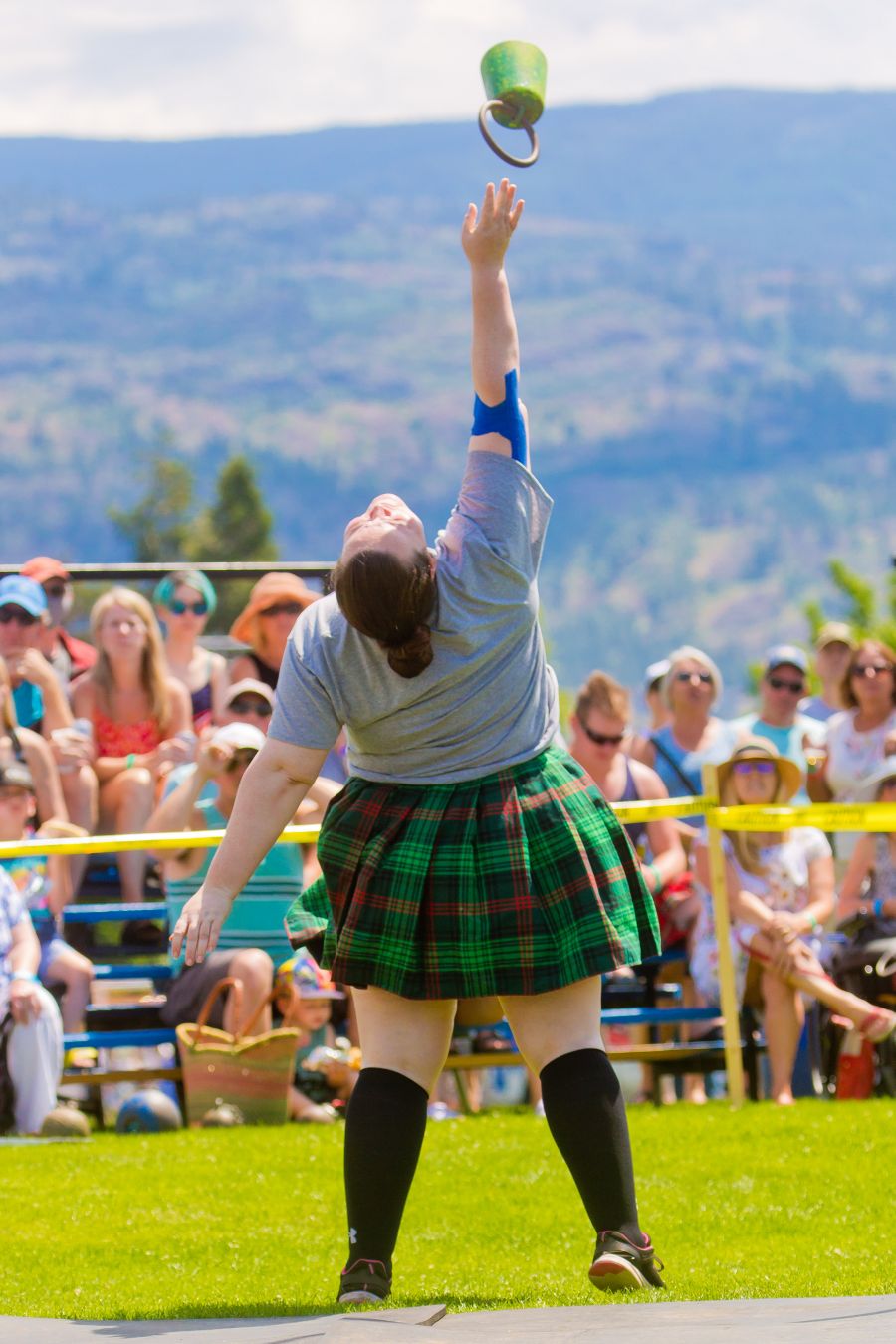 "I thought that when my back gets better," she said, "that throwing a caber in a Highland Games would be the optimal test."

She was drawn to the Highland Games, she said, because she's "from the east coast and had always seen the Games." 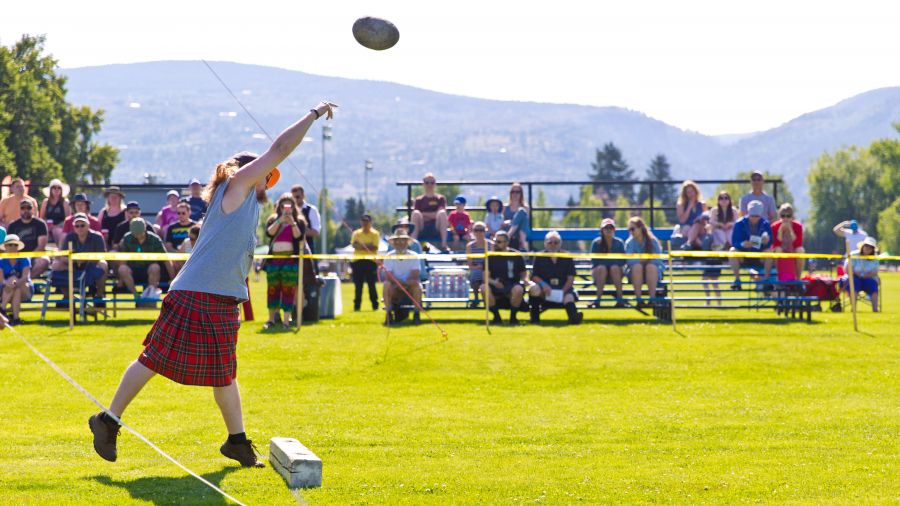 "So for some reason I thought 'go big or go home.' Do the test. It's something different. I've always done more traditionally male jobs and my parents said I could do anything, so I thought why not? 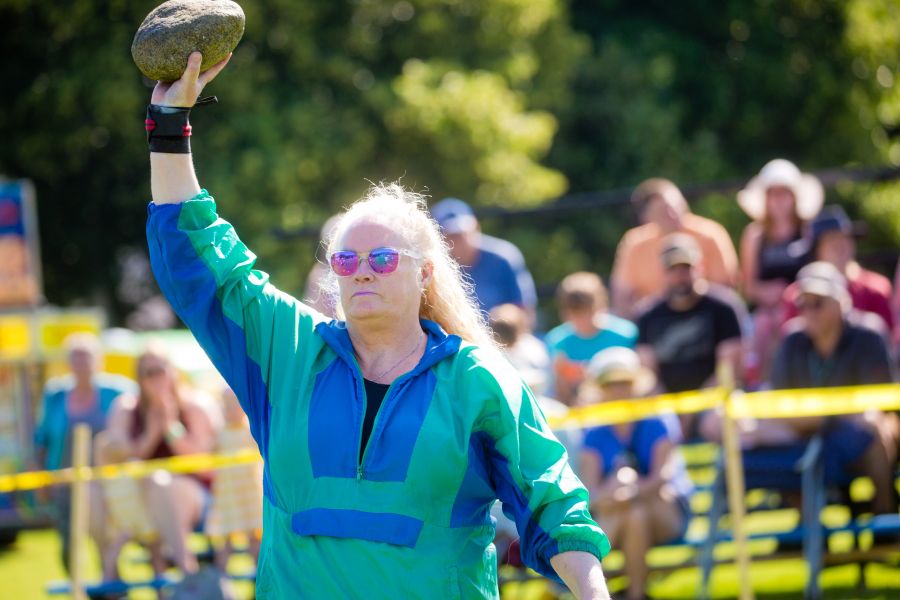 "So I just showed up (at the BC Highland Games in Coquitlam) and I was the only female, so I threw all mens' equipment."

Dallimore taught us that her sport is similar to a decathlon in that each competitor must compete in each discipline (there were nine in total at Saturday's competition) and that the winner is the athlete who performs best across the board. 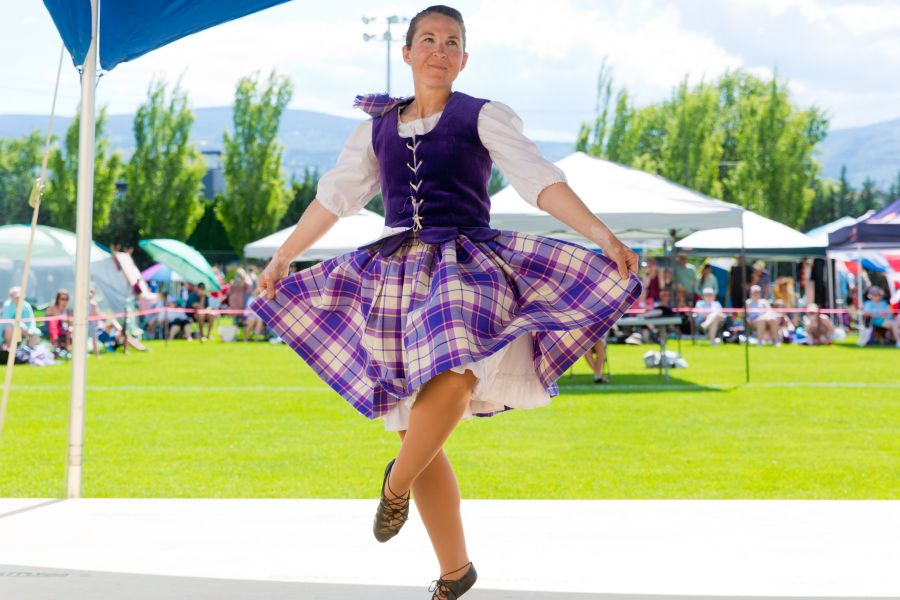 "You do two hammers, two stones, two weight for distance, weight over bar, sheaf toss and the caber toss," she said. "So you can do really well at one or two events but not win overall."

Dallimore has competed for Canada at far-off spots like Iceland, Germany and of course Scotland. She won the Berlin and Stuttgart games, the last victory coming just four years ago in 2018 when she was something like 54. 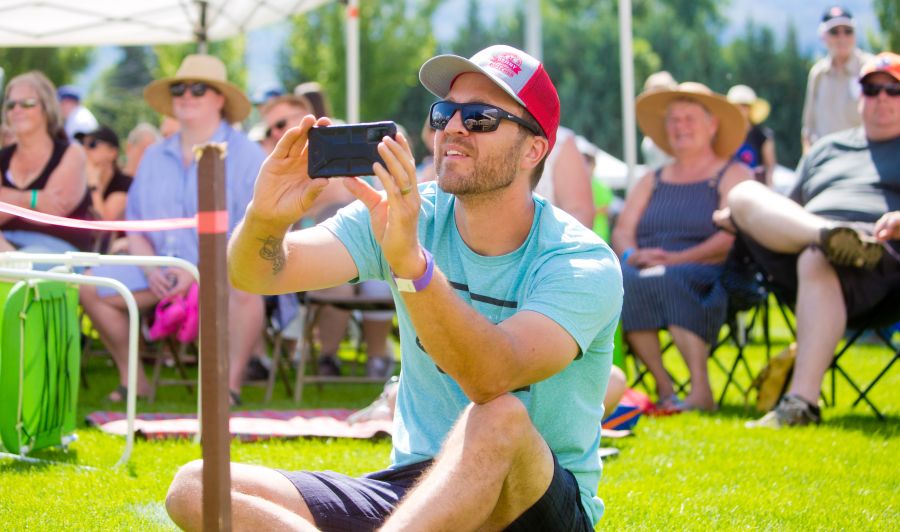 But that's not what makes her happiest.

"When I first started throwing," she said, "I was the only female. Now today at our games, there are double the amount of women than men. That’s pretty good." 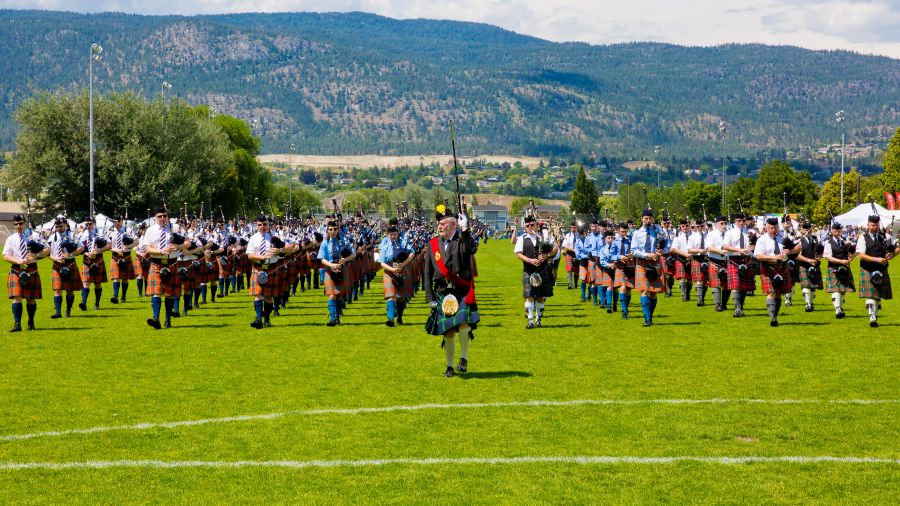 Meanwhile on the other side of the King's Park complex, the regional chapter of the Society for Creative Anachronism were entertaining visitors with their medieval ways. 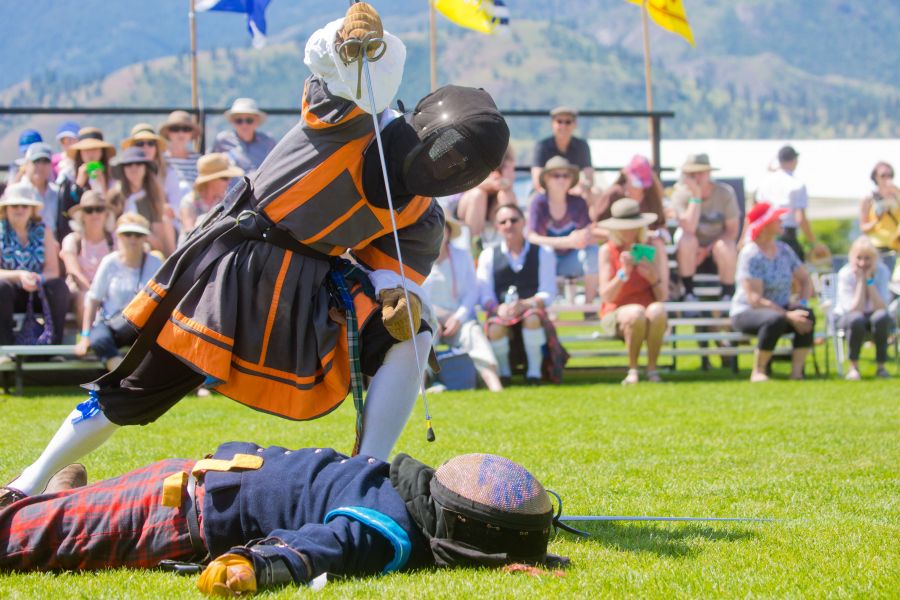 "Anachronism essentially means living in a time with no technology," said member Mitch Hammer. "The society started in Berkeley, California with a bunch of historian students seeing if they could live the medieval lifestyle." 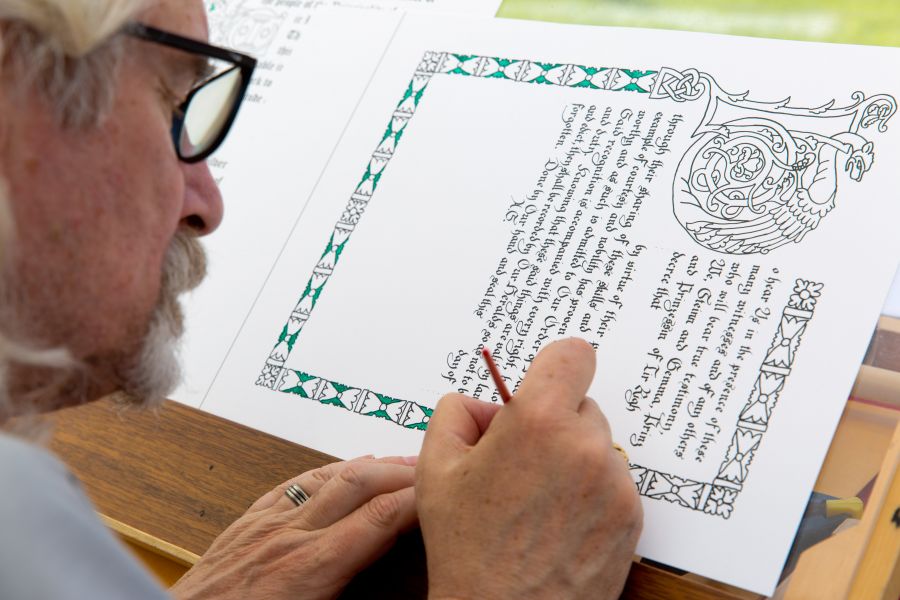 At the festival, Okanagan SCA members lived the lifestyle for all to see. They painted, they drew, they sewed, they educated -- all without modern conveniences. And they engaged in combat too. "Our armored fighters put on full heavy equipment and hit each other with a rattan sword," he said, "But the fighters you'll see today fight without armour because we fight a finesse game.

"We'd fight in a noble duel situation. People would say 'Let's finish this right now. We'll go to the first cut,' and then they'd go on their merry way." 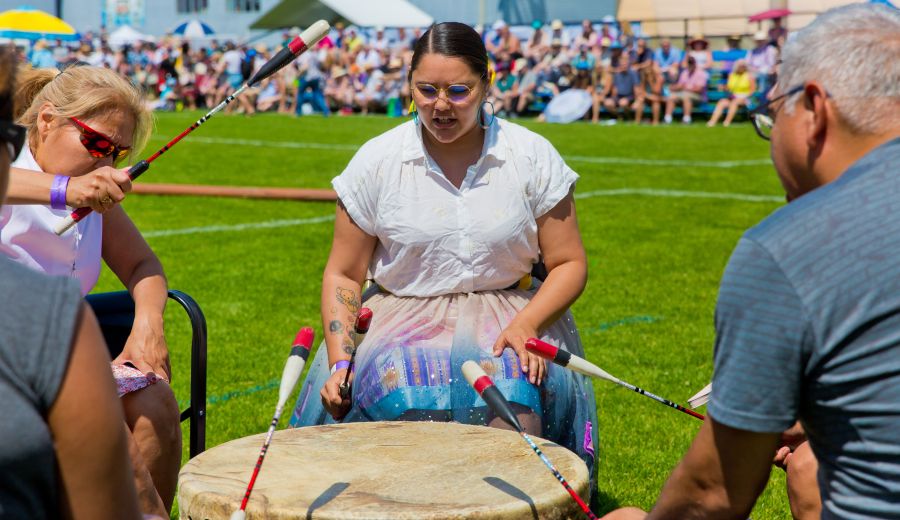 According to Hammer, the Society's local "shire" (division of land) runs from Kelowna to Penticton. They'd love to enroll more members, and can be reached here. 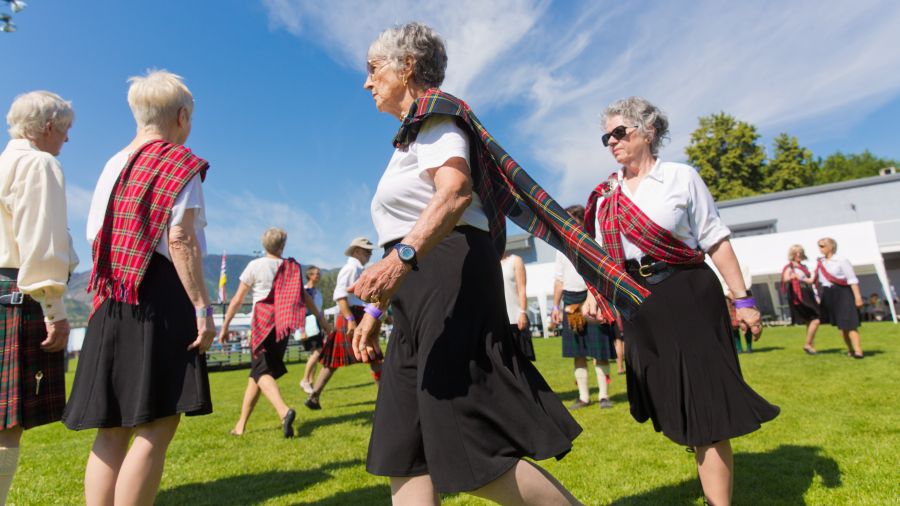 Later, event VP and honourary "Chieftan of the Day" Wayne McDougall surveyed the crowded scene and was happy. 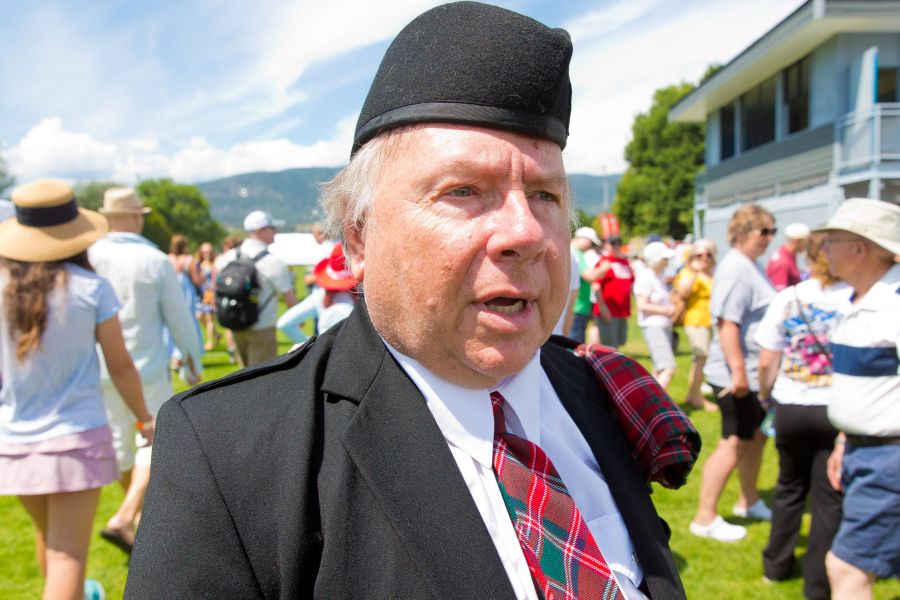 "I think it’s going really well," he said. "I see smiles everywhere. Young and old. Families. People listening to Celtic entertainment. We have a kids zone. A caber toss. All these fun things. 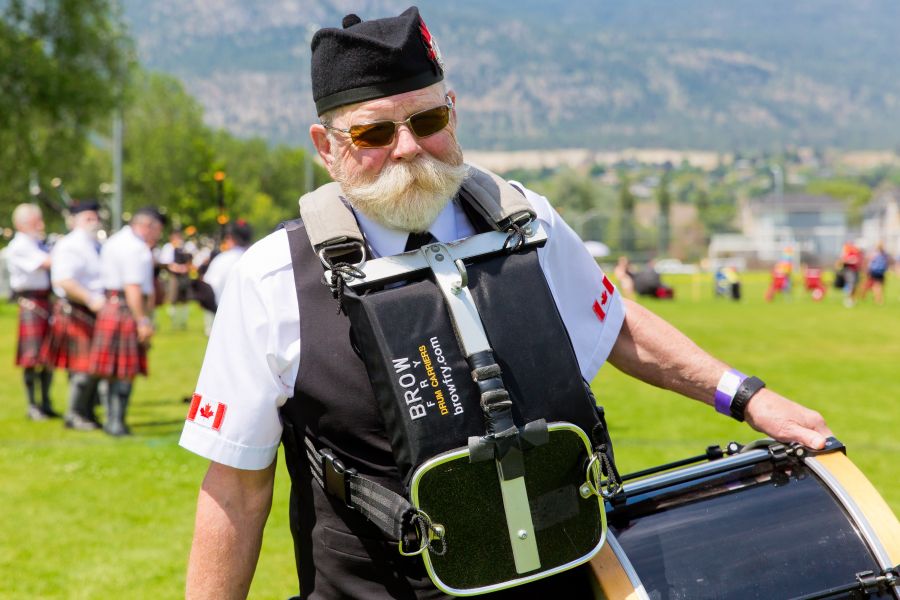 One other thing. Next year, the Penticton Scottish Festival will fall on July 1st, coinciding with Canada Day celebrations. But McDougall doesn't see an issue. 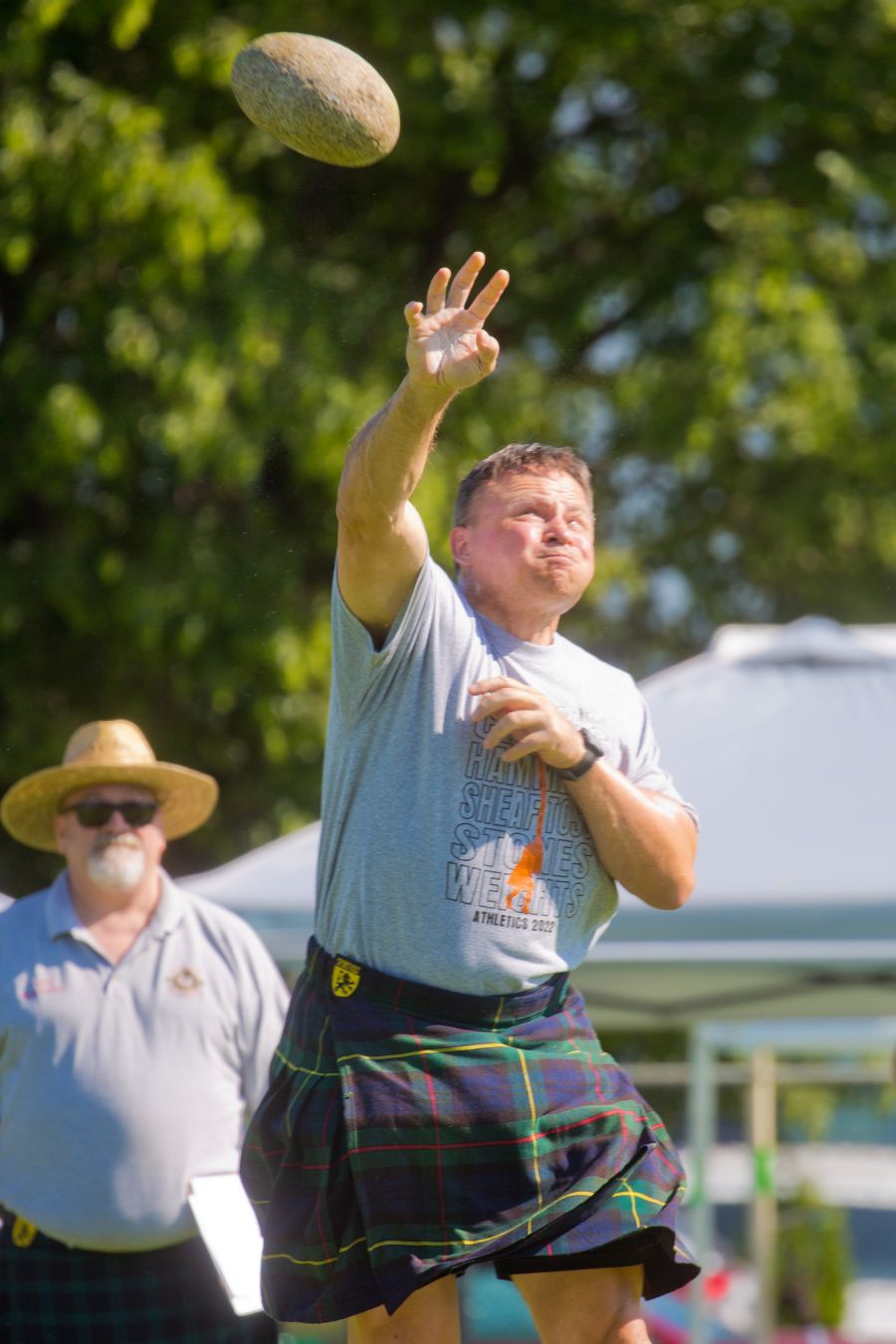 "We're on Canada Day," he said, "because it's the first Saturday in July, so that’s where we land on the calendar. But we'll collaborate. Cultural tourism involves working together rather than competing head to head.