We'd heard rumours of Peachland at Christmas. How the waterfront strip in particular becomes a veritable wonderland of lights in the month of December, with ample contributions not only from local residents, but shop owners and the District too. 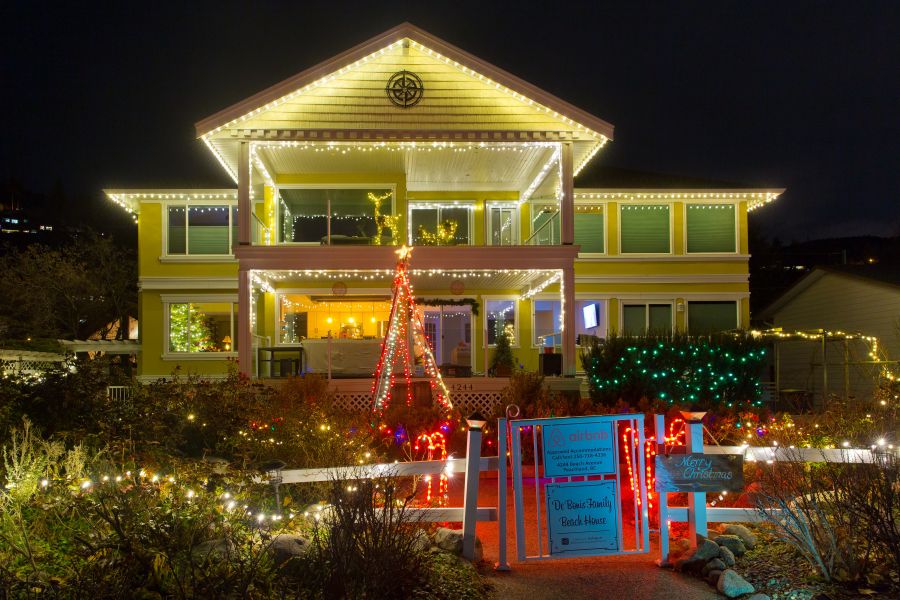 So a few days ago PentictonNow took a Yuletide road trip. And we came away wowed. 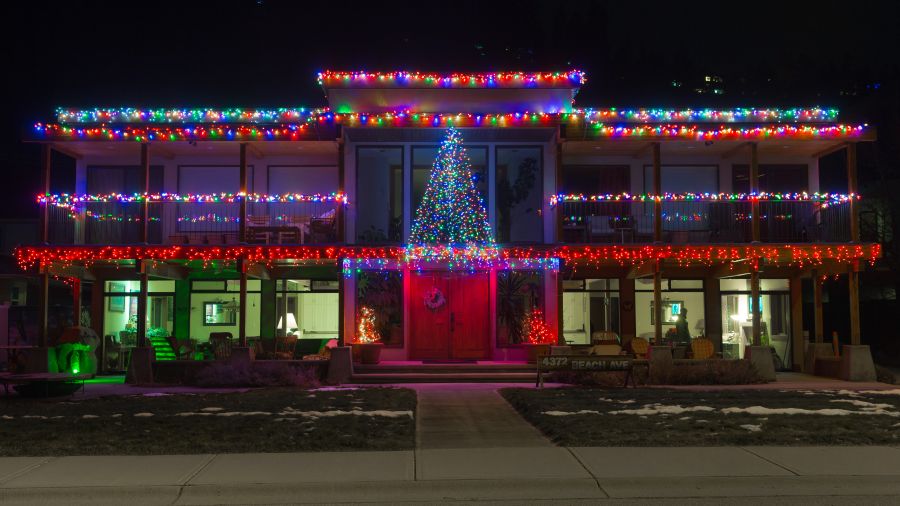 As you might expect, there are multiple homes on the Peachland waterfront done up way beyond the norm. And we have photos of two of the very best. 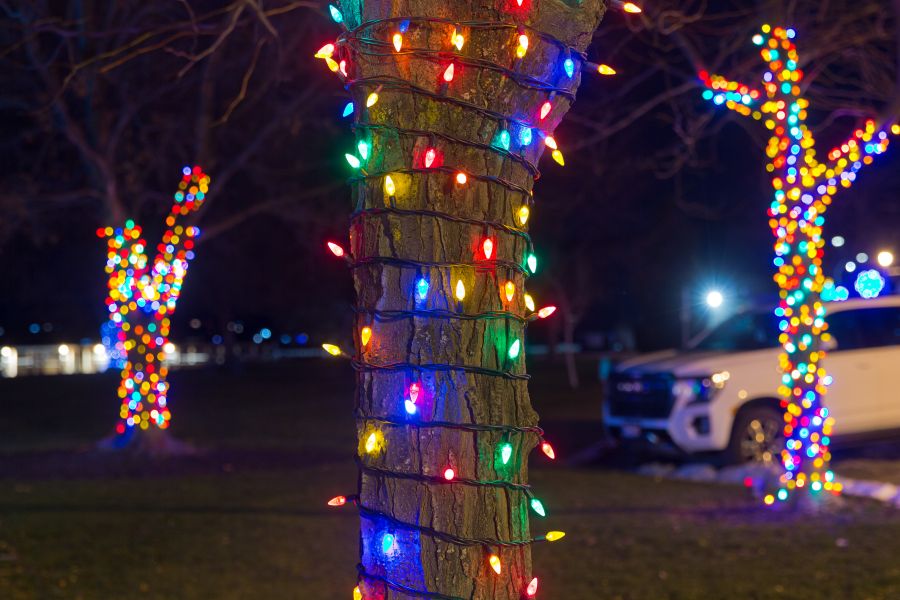 Indeed, one of the two is quite evident from the backside as well for the enormous, roof-mounted peace sign, made of Christmas Lights, that's visible only from vehicles zipping by on Hwy 97.

There are multiple storefronts with that extra special Christmas treatment too, and streetside lights and ornaments everywhere you look. 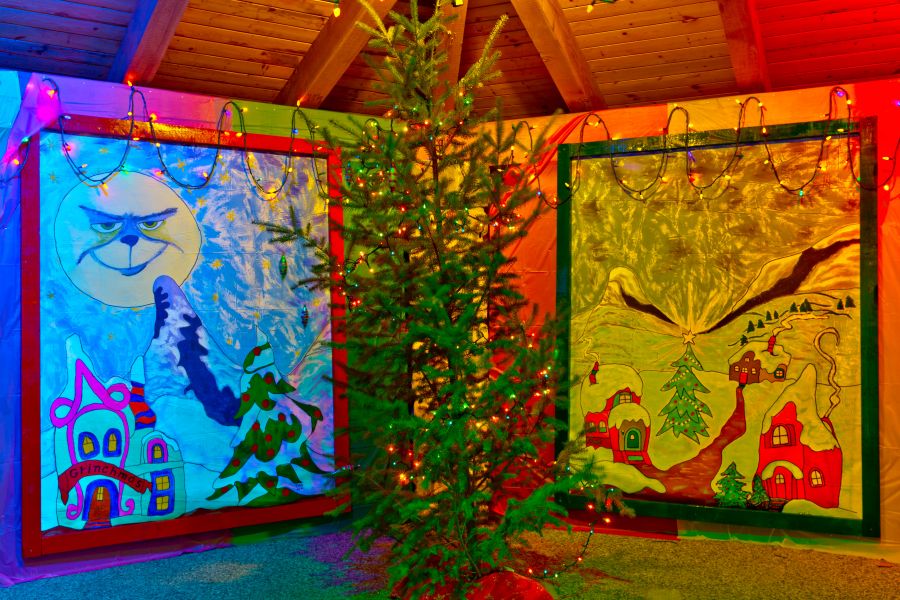 But there are two very obvious stars to this impressive Christmas show. And each is quite distinctive. And incredible.

The first is Heritage Park at the south end of the strip. Here, the District has simply outdone itself in creating a fully walkable, imagination-triggering display that stretches all the way from the street to the Ray Kandola Heritage Pier, encompassing the Rotary pavilion and virtually every tall tree in the park along the way. As we took photos, we watched a variety of families arrive and spend the better part of a half hour just sauntering about, soaking up the ambience. 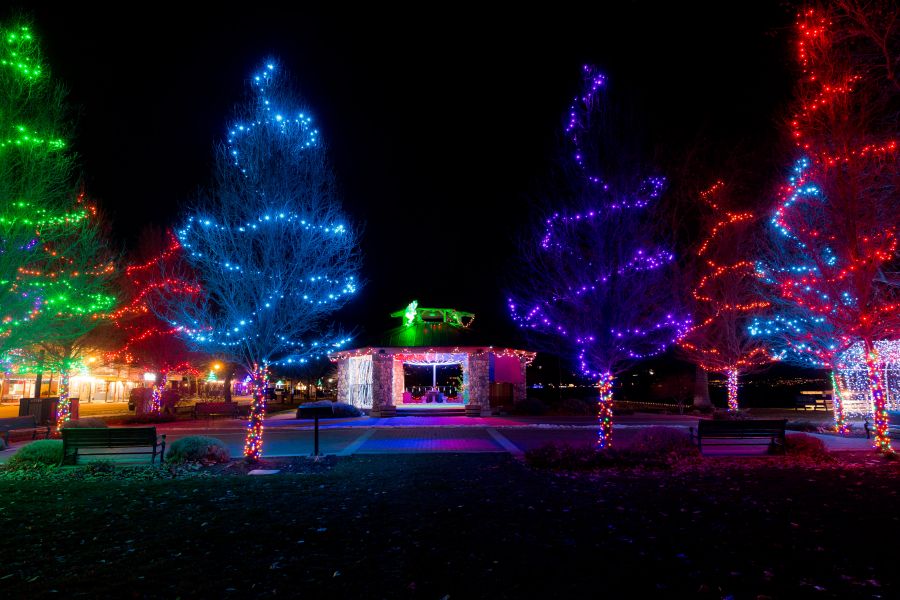 From there it was on to our final stop of the evening, the Peachland eatery known at Gasthaus on the Lake. We’d driven past the place an hour earlier, and couldn’t help but notice the Bavarian Christmas theme and all the people milling about. We had no choice but to return.

We were glad we did. Arriving at Gasthaus at Christmas is like accidentally walking onto the set of a Hallmark Christmas movie. 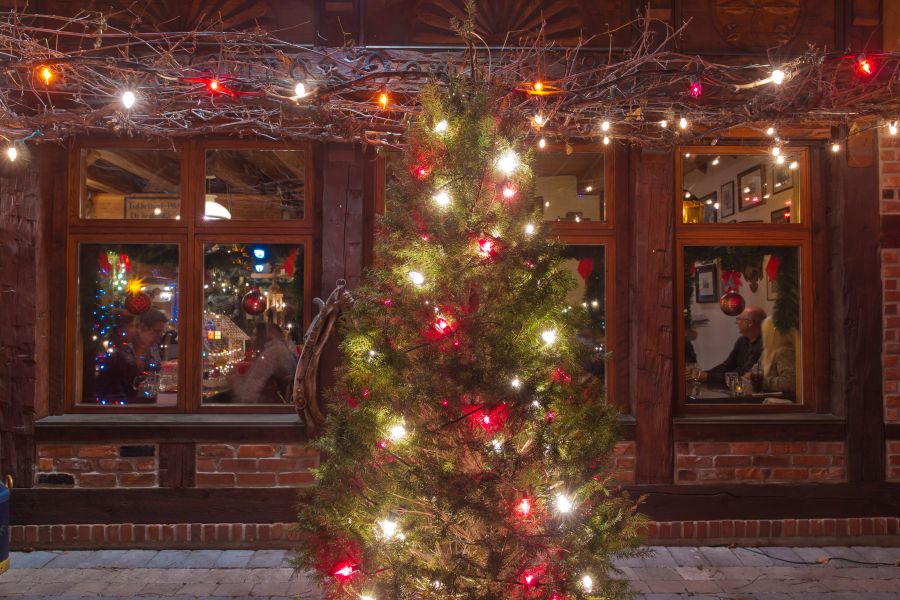 Inside the restaurant, even at 7 pm on a Sunday night, the tables were packed and the mood was energetic. At the entrance was a mega-size gingerbread house, freshly baked and decorated by the Gasthaus chef. But the real magic happened outside the restaurant, where the spacious courtyard and patio area were dressed to the nines and filled with folks meandering around.

And at the far corner of the property was a tiny structure made entirely of wood, with old-school paneled windows. A little sign hung above the front door, saying, "Wood and Glass Christmas Ornaments, Handcrafted in Europe." 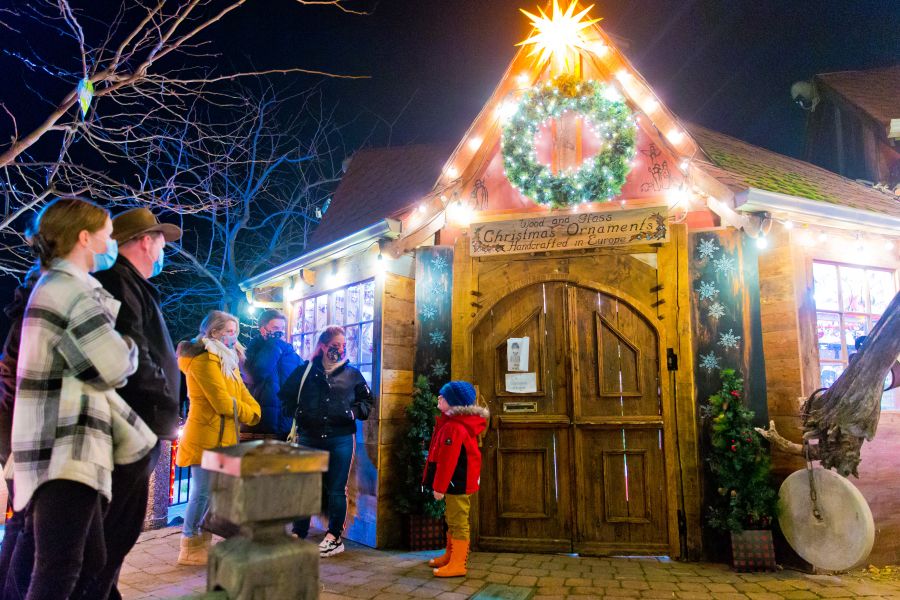 The structure was clearly the centre of attention. In fact, the COVID-inspired lineup just to get inside numbered a dozen or more.

Sadly, we didn’t have the time to stick around. But three days later we made a return visit, and this time we got lucky.

Once inside, it took seconds to understand the allure of the little shop called the Gasthaus Christmas Market. The space, which is just about how we imagined an elf's cottage would look, was jammed, literally from floor to ceiling, with ornaments. But not any old ornaments. The stuff here was far different from the typical big box fare.

"It's just like a piece of Germany in Peachland," said store rep Michelle Reimer, who showed us around then explained she'd worked with Gasthaus since 2011 and had become a Christmas Market fixture along the way. "Everything here comes from Germany, or Poland," she added, "and none from China. There are so many unique things here you can't find anywhere else."

Reimer, who commutes from Summerland and joked that she's a "little bit" obsessed with Christmas, said she's thrilled she gets to work at the Market every winter. "I've even started my own collection with ornaments from here," she laughed. "My tree is full of this sort of stuff.

"And the waterfront here at this time of year is beautiful. I love it. There's something so magical. Everything is sparkly and shiny. It's a once a year thing where everyone's happy and in a good mood." 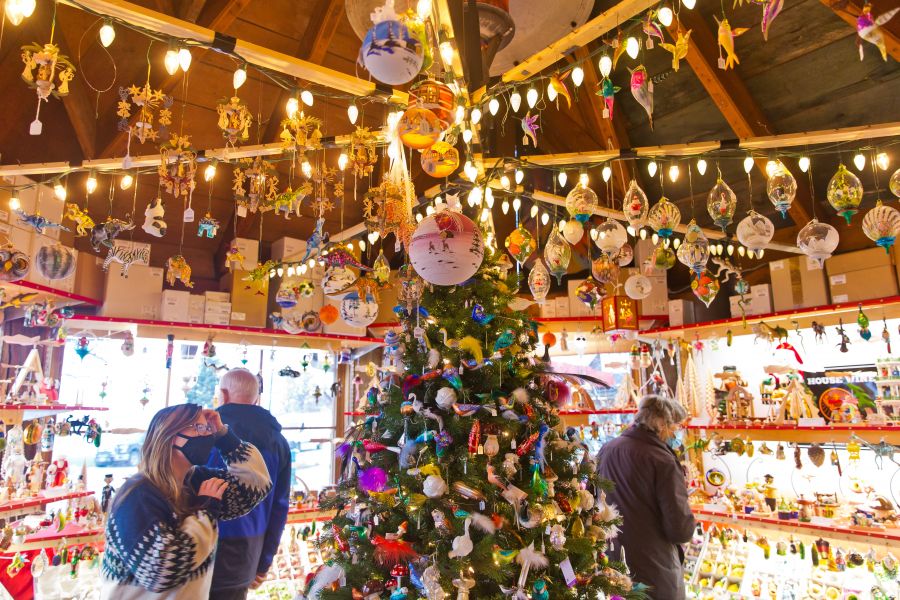 Then she taught us something we never would have guessed on our own. Once the new year has begun, the majority of the Market building disappears until the next Christmas season.

"In the summer this space belongs to the pub," said Reimer. "They'll use it as patio seating. "So the walls come off and only the main posts and the roof exist the rest of the year. And then the walls and the insulation are installed again for next November."

According to Reimer, the Market fan base is far and wide. "Lots of people come here from all over the Okanagan. They make it a family tradition. They come for lunch or dinner then before or after they pick up a unique Christmas ornament or two."

And they undoubtedly take a good look at the Peachland light show too. As we can attest, it makes for a great December outing.