Penticton has a new radio station at 92.9 on the FM dial

FM radio is alive and kicking - if you're in Kelowna. Down here in Penticton, the pickings are mighty slim. Hit "seek" while cruising around the city and you'll likely find four stations, one of which trickles into town all the way from Washington State.

Until now. As of Friday, there's a new kid on the FM dial. And it truly is based right here in Penticton. 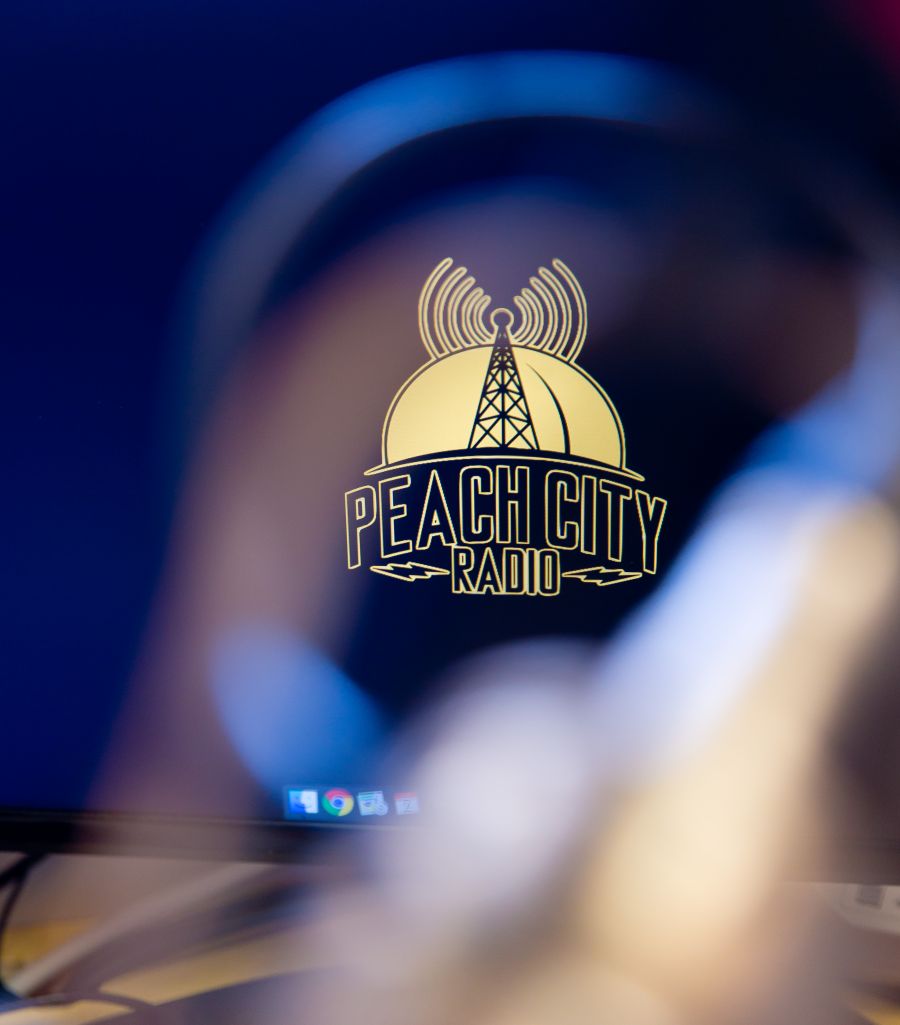 It's called Peach City Radio, and if the name sounds familiar, it should. The station was founded locally and has been broadcasting online since 2013. And one of its premier fundraising events, the Okanagan Vinyl Fest, has been a late summer Penticton staple since 2012. 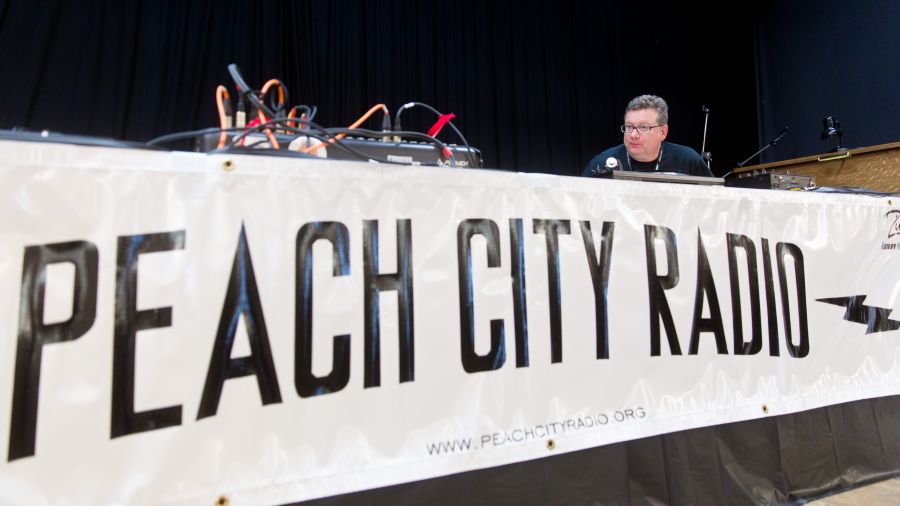 But now, they've finally made the move to FM. And spirits were justifiably high Saturday afternoon when we visited Peach City Radio HQ, inside the Cannery Trade Centre.

"Even though it didn't mean to be the end goal, it sure does feel like the big prize at the end of the road," said an upbeat Jackie Del Rizzo, president of the station's formative body, the Peach City Community Radio Society.

"A lot of people still love FM radio. Our online listenership is one thing, but the FM dial gives us so much more reach to the community." 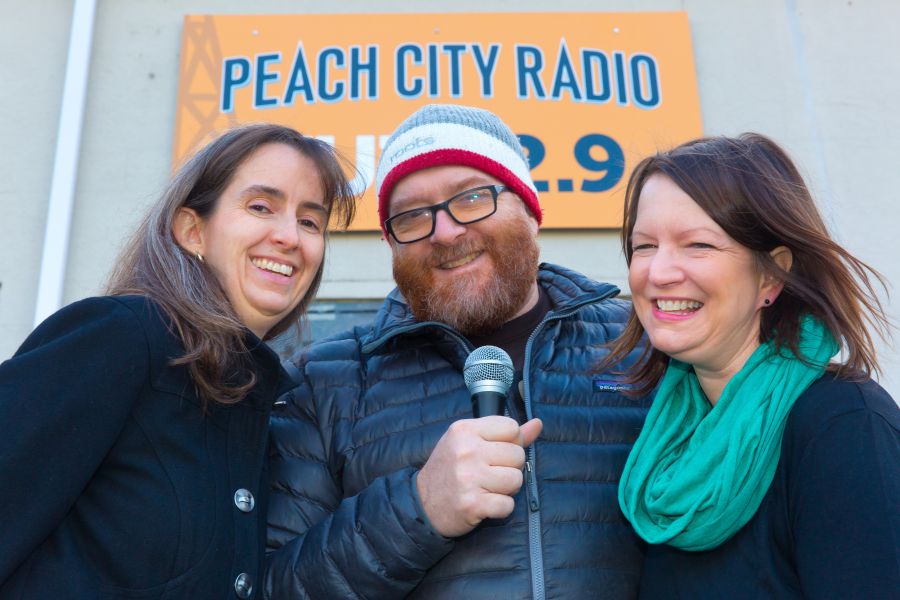 Del Rizzo's right. From cars and taxis to job sites, beaches, and any location where data and Wi-Fi can't or doesn't reach – radio remains a powerful force.

And now, by tuning to 92.9 on any old FM receiver, you'll encounter what the Peach City folks have branded "CFUZ-FM."

Get it? Peaches? Fuzz? 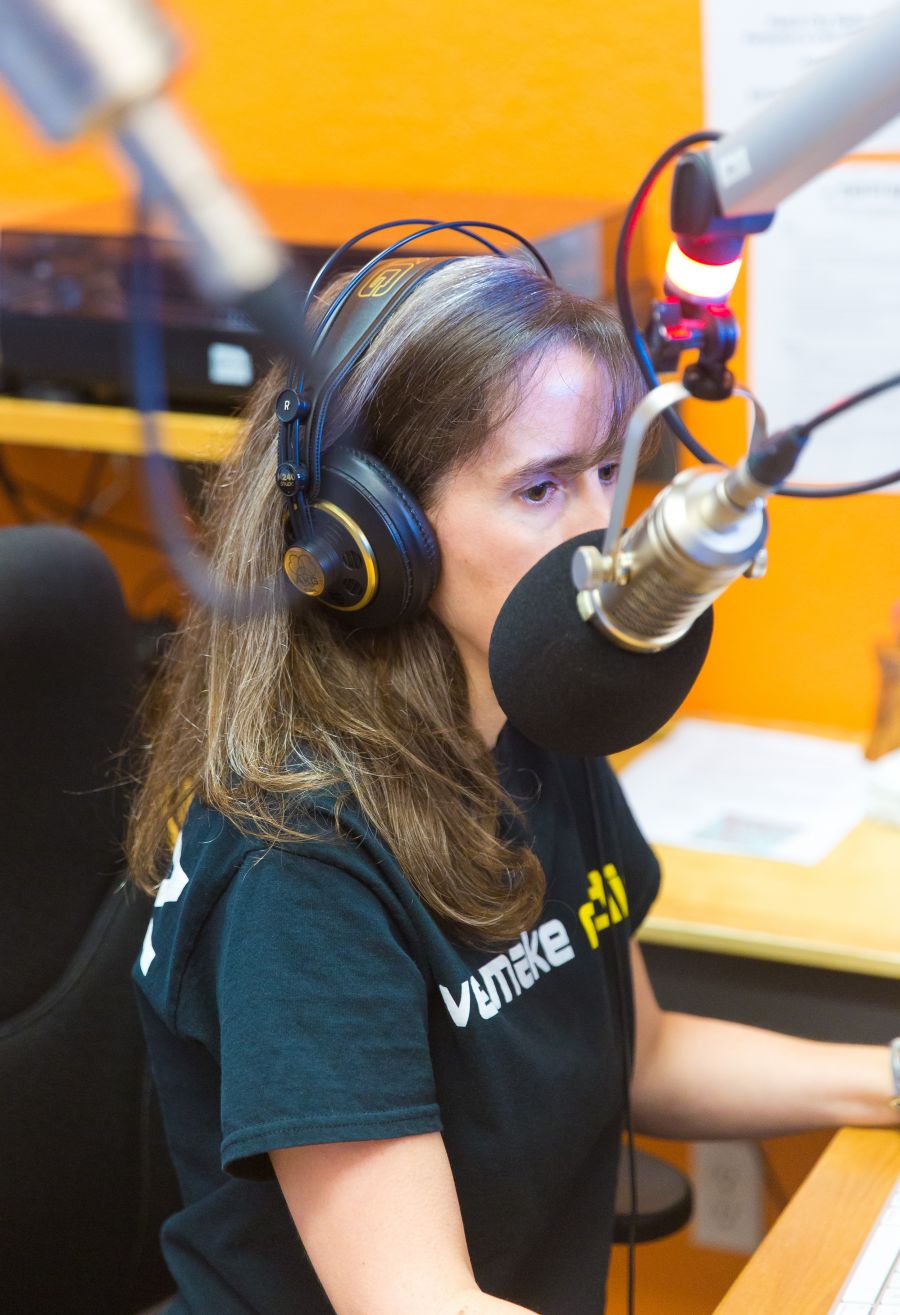 "When we applied for the license," said Del Rizzo, "we were given a list of available call letters. We were looking around for something that would be meaningful, and this one made sense. I was so happy it was still available."

Del Rizzo talks about the early days and it soon becomes clear just how much time and effort went into the project. 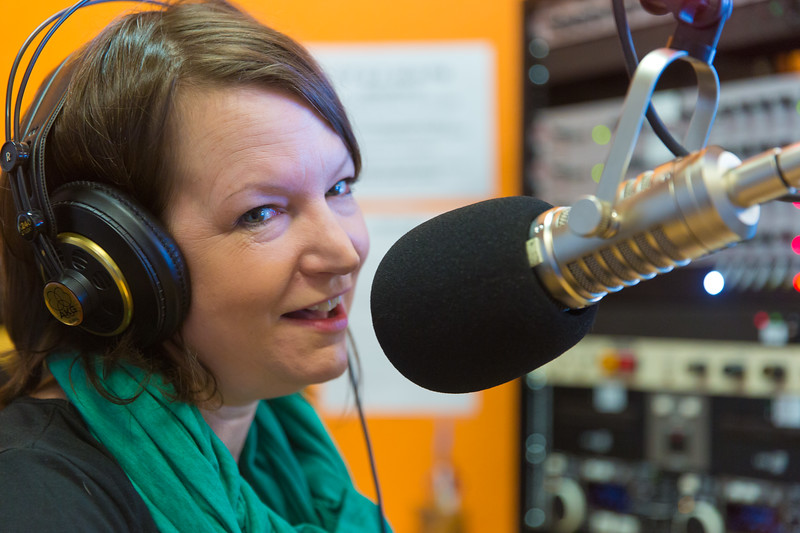 "We got started probably nine years ago. There was a message that went out in the newspaper from a fellow in Kelowna named Cam Baughen. He'd been trying to get a community station happening there, and it was a big project that didn't quite happen then."

"Then he moved to Penticton and he put a call out for interest and a whole lot of people came forward, and it just kind of snowballed."

That it did. Soon, the Peach City Community Radio Society, with Baughen at the helm, was in full-on planning mode and figuring out what was needed in terms of volunteers and committees. And for a non-profit society that receives operating capital only through fundraisers and donations, the volunteer aspect was very important indeed. 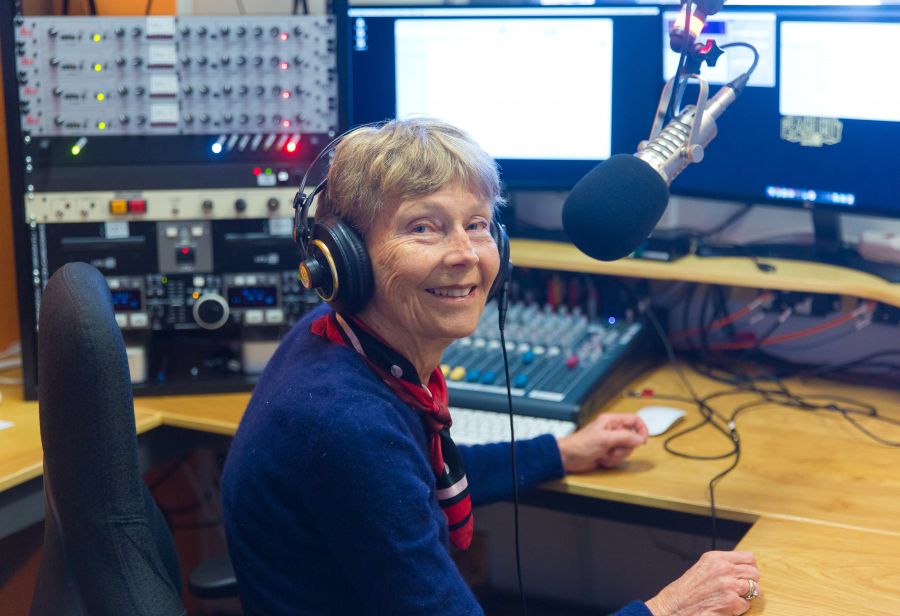 By 2013, Peach City Radio was broadcasting online. "At that point," says Del Rizzo. "we had a few people building podcast style radio shows - prerecording them and making them sound like live radio shows. They'd work from their home studios on their home computers, putting together a show, editing it, and then uploading it so we could play it on our online stream."

Good thing all those podcasters were so happy working from home, because Peach City Radio circa 2013 still didn't have a physical studio or office. "For a long time," says Del Rizzo, it was just a server we had at Cowork Penticton."

Still, they kept persisting, and in 2015 the CRTC granted them an FM license. Del Rizzo describes the application process as lengthy and involved but not inordinately difficult, in part due to the shortage of local stations. "We didn't really encounter issues getting our license because there wasn't a lot of other stations out there to bump into."

And then in January of the very next year, CFUZ finally found a space they could call their own.
It's the same space they're still in today. 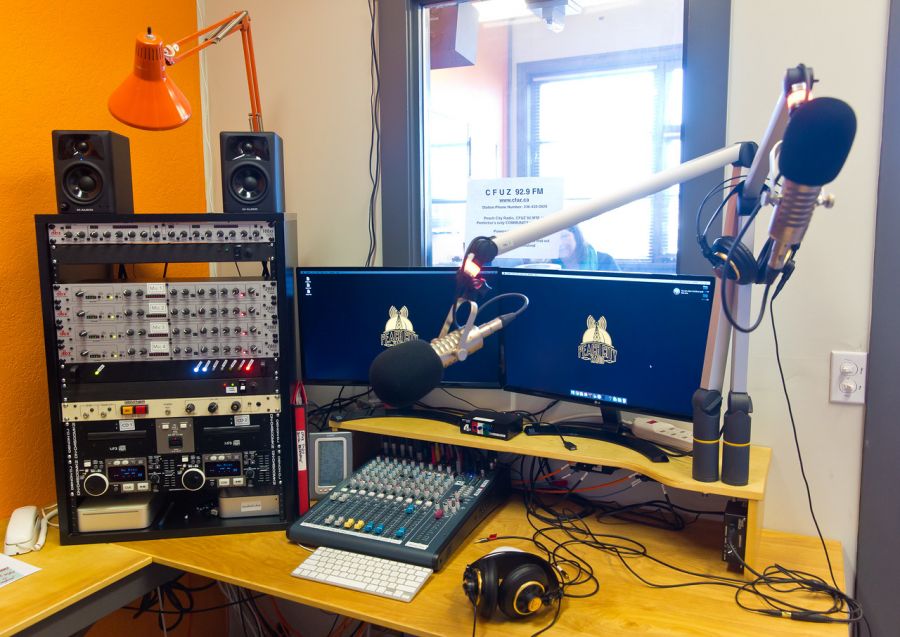 "Terminal Bailiff," says Del Rizzo while looking around the studio, "was downsizing, and they found a way for us to move into this one little corner."

Sitting next to Del Rizzo was Society VP was Claire Thompson, a teacher in her day job when she's not helping direct the good ship CFUZ. "When we finally did get our home," she said, "we really had to renovate it. It definitely didn't look like this."

As Del Rizzo alluded, the place isn't particularly big. But it's nicely set up. There's a work/meeting room with a big boardroom table and a desk where current CFUZ program director and former president Dave Del Rizzo (Jackie's husband) does his thing. 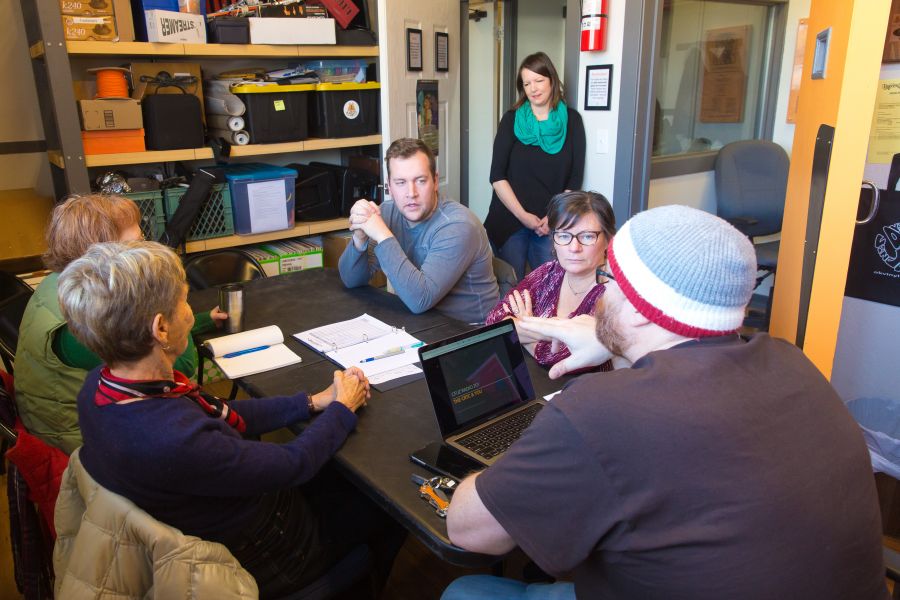 And then there's the studio. It's not quite soundproof yet - Del Rizzo says that's a project for future fundraising - but it certainly feels sophisticated enough and it's loaded with all the mics, mic preamps, mixers, monitors, headphones, and computer gear you'd expect. And that's a nod not only to the Society's ongoing fundraising efforts but also the many donations it's received from supporters.

There's a lot of old school stuff too. A rack of CDs, some LPs, a couple turntables, and even a cassette deck. Said Thompson, "A lot of our programmers (that's what CFUZ calls its on-air talent) will bring in an iPad or a laptop and have their own music that they'll put through the board. But there are a lot of vinyl loving people out there too. We have every kind of music format...except 8-track." 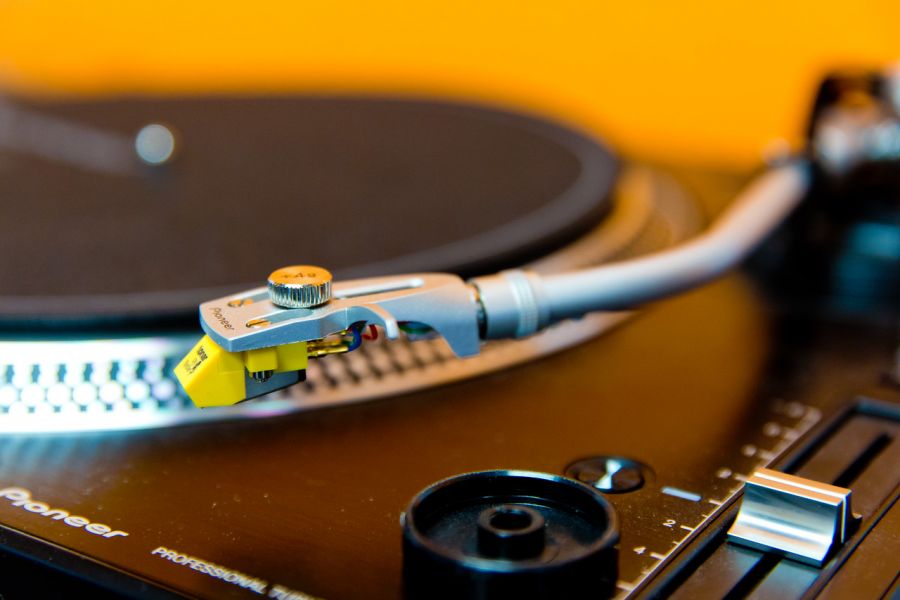 As for what listeners can expect from the city's newest FM presence, Del Rizzo says it'll be exceedingly diverse. And she also put out notice that the station is actively searching for new programmers.

"It's going to be as varied as the people who are hosting the shows, and that's what community radio should be."

"This morning, for example, there was a block of music that was older country. Right after that, there was a series of selections that was all world music."

"And then the next hour might be a spoken word show. It might even be syndicated. We currently have some syndicated shows that are representative of the programming we don't
have locally right now." 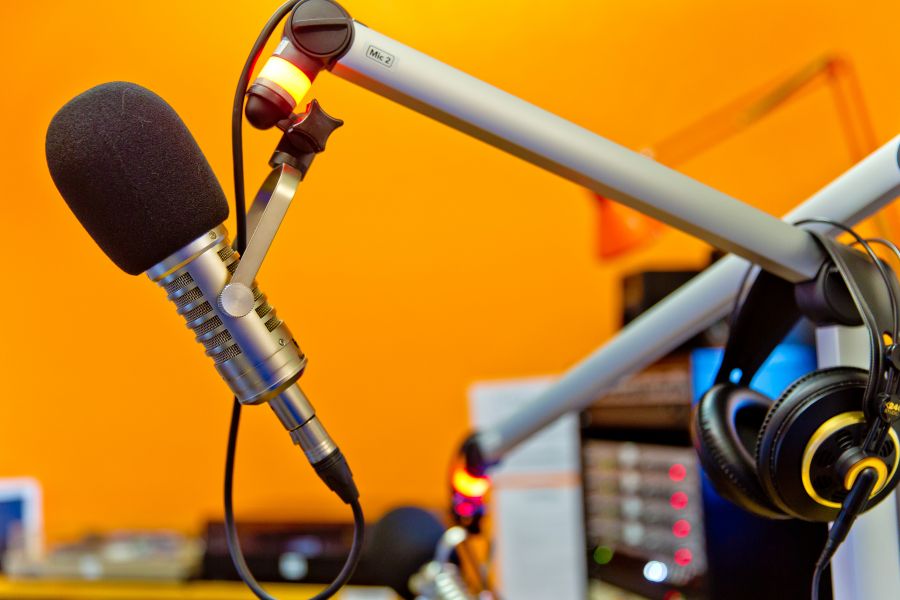 Thompson adds, "Most of our shows right now are music, and we also do spoken word. Right now we have shows like "Wabi Women" which is a couple of ladies talking about navigating middle age. We have "On Board" which is a half hour talk show about what's going on at the station. And soon we'll have a new show called "The Crooked Needle" where the programmer plays only vinyl and tends to go for stuff from the 70s and 80s."

Del Rizzo says CFUZ won't sound like commercial radio, and it won't sound like CBC. "It's whoever is coming to us and saying 'I want to do a show like this.' And as we get more people on board, those hours will fill up with more and more unique local content."

And that's one of CFUZ's chief priorities going forward - finding local folks who want to learn the ropes and host a radio show of their own creation. And if the turnout at Saturday's programmer orientation session is any indication, they're off to a good start.

"To get involved," says Del Rizzo, "first check out our website, cfuz.ca, which gives general information. And sign up for our e-cast, which is our electronic newsletter that gives you weekly updates about what's happening, including our training programs."

To get the full rundown, go here. 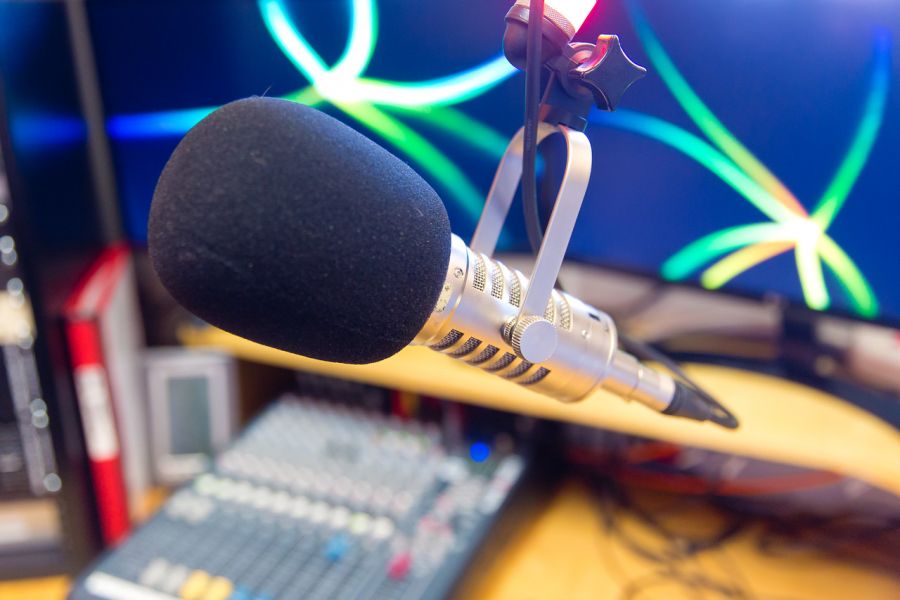 And soon, the station will also launch its sponsorship program, where local businesses can make a donation and in return receive goodwill mentions on air. Because CFUZ isn't a commercial station, those messages can't be straight-up advertisements. But they will leave the impression that you're a business that gets behind local initiatives.

Something else to remember - CFUZ-FM isn't exactly a powerhouse. Yet. It currently has a seven-meter monopole antenna, and it transmits at just 49.9 watts. Compare that to CJMG-FM (SunFM) for example, which operates at 1800 watts.

According to Del Rizzo, "We're not super powerful, but when you go for a stronger transmitter, it's a whole different set of hoops to jump through."

Still, we found reception to be pretty decent. FM signals work best when there's a direct line of sight from antenna to receiver, and as we drove around the city we encountered spottiness only when that signal path, from the CFUZ antenna atop the Cannery Trade Centre, was severely impeded. 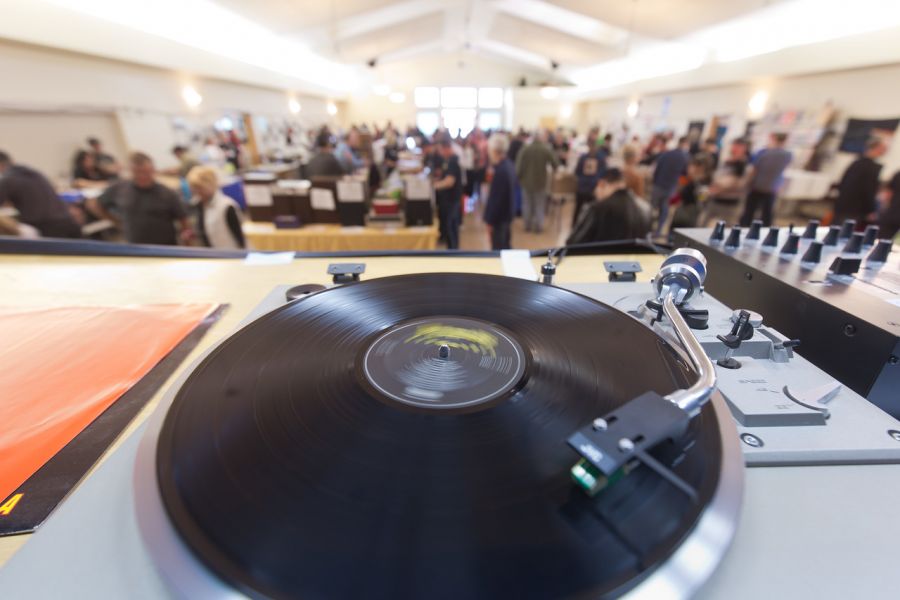 So while the inner city, the Skaha Lake waterfront, the eastern hills, and the West Bench were just fine, we detected marginal interference along parts of the Okanagan Lake strip, where tall buildings abound. Summerland, at a far greater distance, was rougher still. Though even then, elevation and good gear will certainly help.

And of course, the CFUZ online stream is always available by clicking the "Listen Online" button here.

Does Penticton need a truly local FM radio station that's both informative and enjoyable? You bet. Is Peach City Radio CFUZ-FM that station? It certainly seems it'll be.