The City of Penticton stirred up far more controversy than it likely expected earlier this spring when it awarded a three-year management term of the celebrated Penticton Peach to a new proprietor. 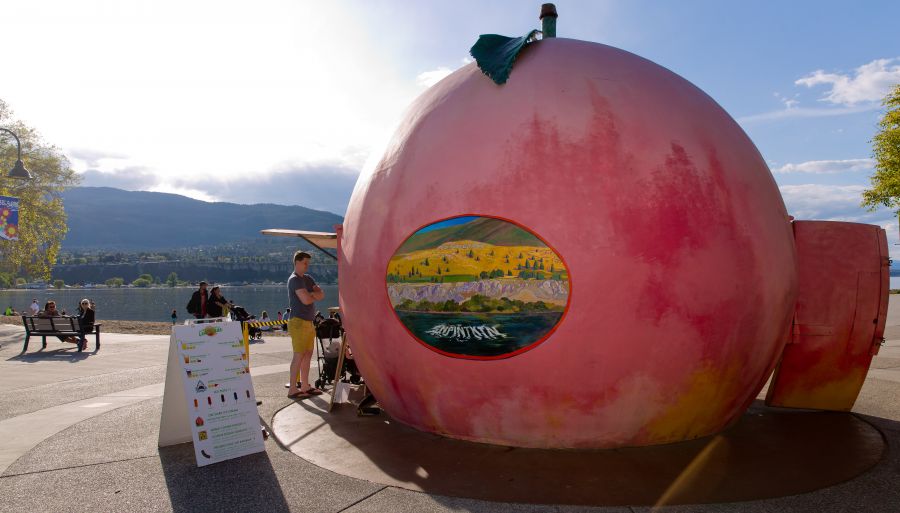 Out was the local team of Diana and Dustin Stirling, who had ingratiated themselves to Pentictonites over their six-year Peach run in a number of ways, but mostly by concocting something seemingly magical in the small but significant concession stand on the town's northern shore.

In their place was an unknown entity from another province. And social media channels went crazy, partly for the reasons already explained above and partly due to the early spread of misleading information. 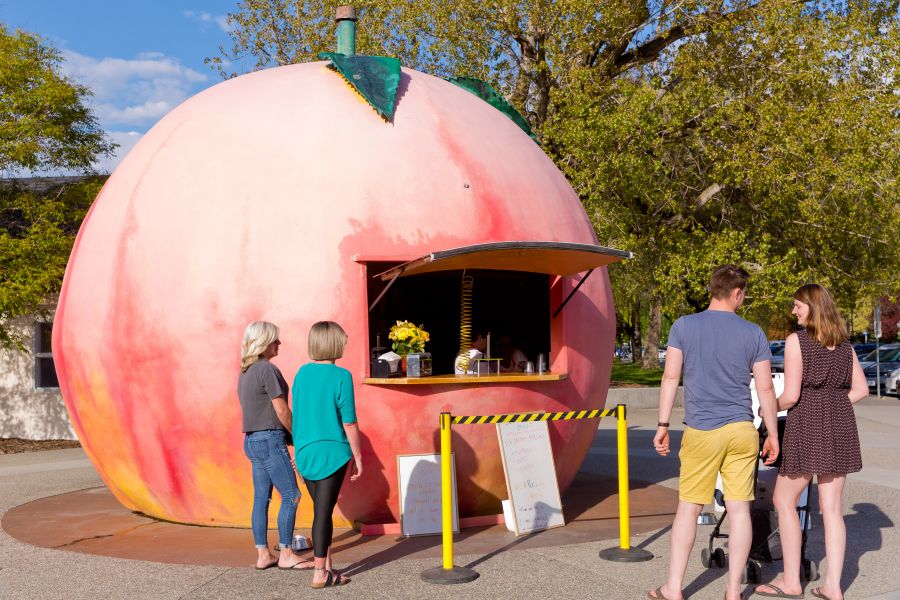 The Peach wasn't becoming a lemon. Aliens weren't transporting it to Mars. Yes, the Stirlings had lost out, and clearly to many the City's decision-making process was flawed.

But Calgary-based Family Squeezed Lemonade had taken possession quite fairly, and soon it would be time to see them show their stuff.

That time is now. 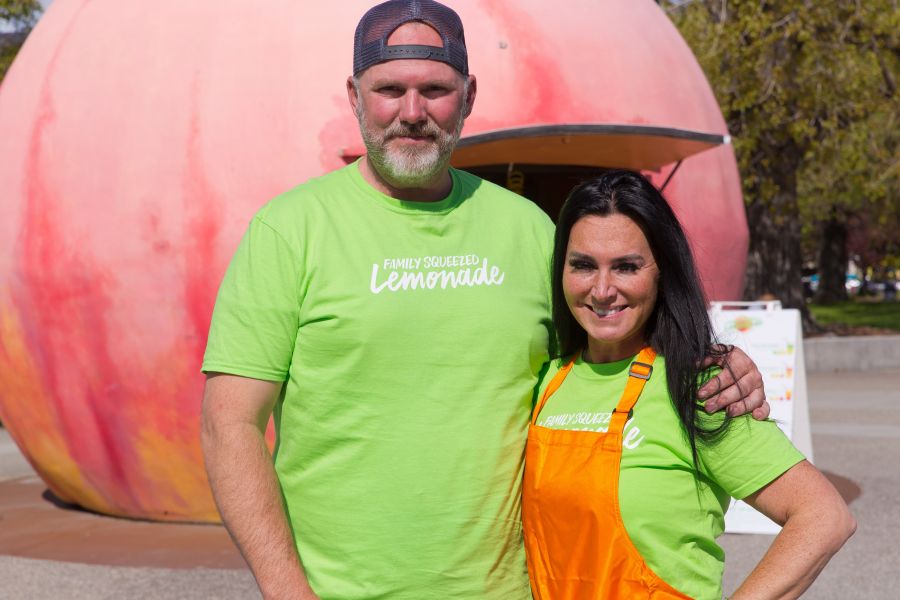 PentictonNow stopped by the Peach this weekend -- Saturday mid-afternoon to be exact -- to see how it was doing on its second open day of the new year (the debut being Friday), and the first under new managment since 2016.

It wasn't exactly humming when we arrived but little else on the beach was humming either. That's what a continuation of this spring's strangely cool, windy weather trend will do. Sunday afternon, with temps finally in the 20s, the body count was higher. 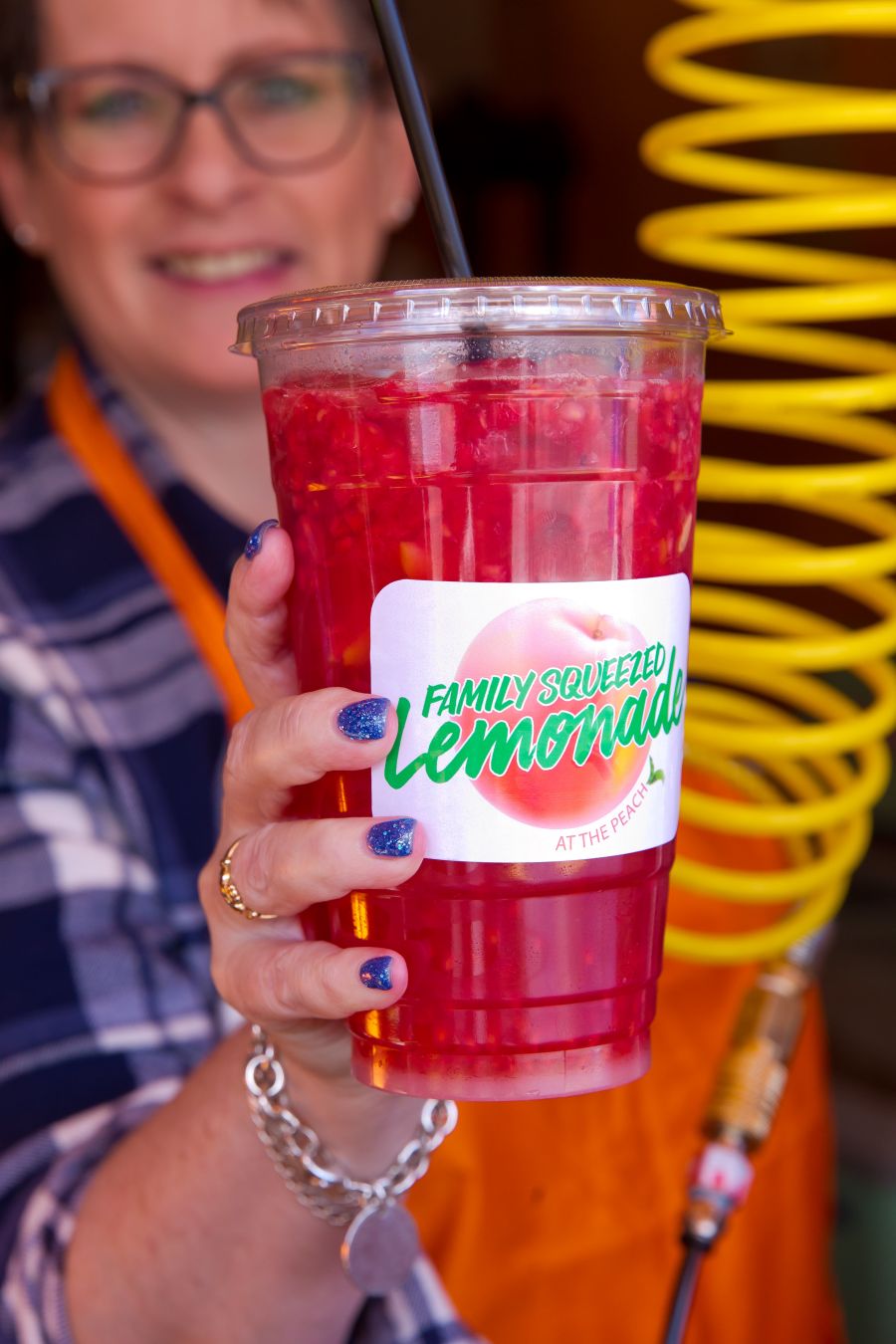 "We had a great reception," she said. "We planned to open today at noon and we had people online saying they'd be the first to be here, and we did have a little lineup just before.

"I'm surprised because it’s a cool day, but we had a warm welcome and it’s great to be here."

Officially, the business is now known as "The Penticton Peach by Family Squeezed Lemonade." But according to Andrews, "It's just the Peach, and it's always going to be the Peach."

"We wanted to be here in the Peach because it was the Peach. There were never any plans to make it anything different. We just want to enhance it and maybe go in a little bit of a different direction right now." 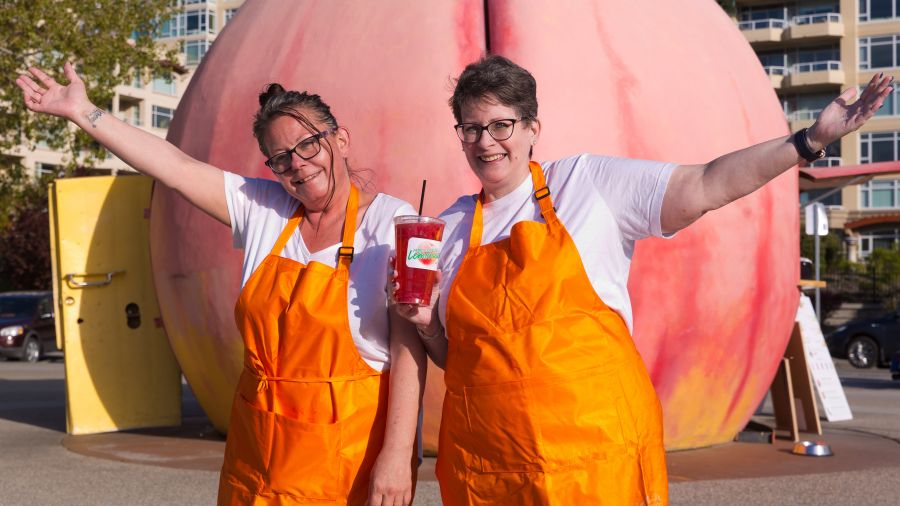 We checked out the menu to see what direction that was. It was conveniently displayed on a huge sandwich board just a few feet away from the Peach itself, and we asked Andrews to give us the details.

"Our menu is really on brand for Penticton," she said. "Like our Orchard Ice Cream, which is fruit-infused ice cream that we do right here. So whether that's peaches or cherries or mint, it's made to order and we infuse the fresh fruit or fresh herbs or even lavender right then."

"And I have to say, ice cream with lavender, or mint, is amazing. You might not think so, but it is."

Next up was the lemonade, freshly squeezed and in a variety of flavours, many of which you don't normally think of when you think lemonade. 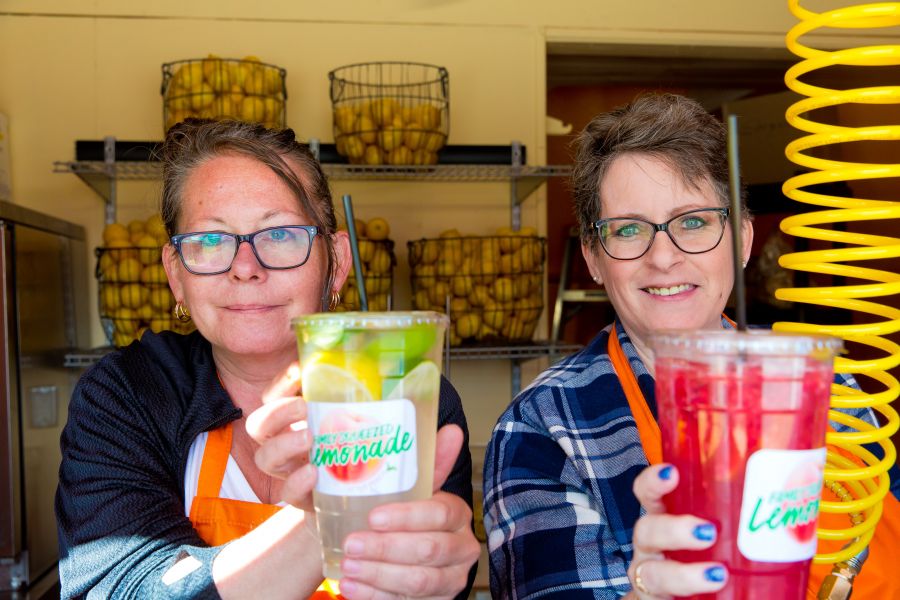 Like "Cherry Orchard," which features lemons, limes and cherries. Or "Lovely Lavender," with its lemons and fresh lavender.

We tried "Rosie Raspberry" and were immediately hit with a blast of flavor. Did it quench our thirst? We're not sure because we kept sipping it 'til it was gone.

At nine bucks each, they aren’t cheap. But they are yummy. And memorable.

Those who'd rather share with everyone else on the entire beach can opt for the monstrous "Shark Attack Sand Bucket." 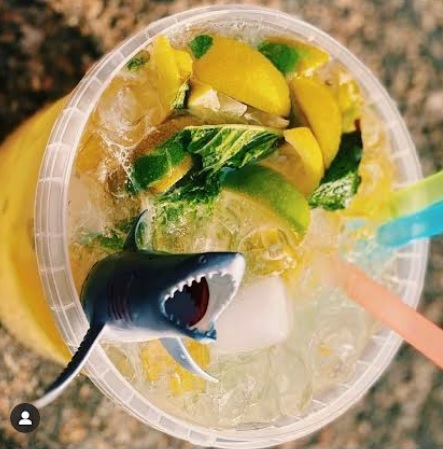 It's $21, but it includes a whopping 2.5 liters of drink, shark "blood" made of cherry juice and a bucket-size beverage container. Oh yeah, there's also a toy shark looming on the surface.

Andrews claims the Peach will soon employ 15 to 20 people -- all local. One of those people is Pentictonite Tanya Easton, who moved here from the lower mainland six months ago with her husband and is now a Peach co-manager. 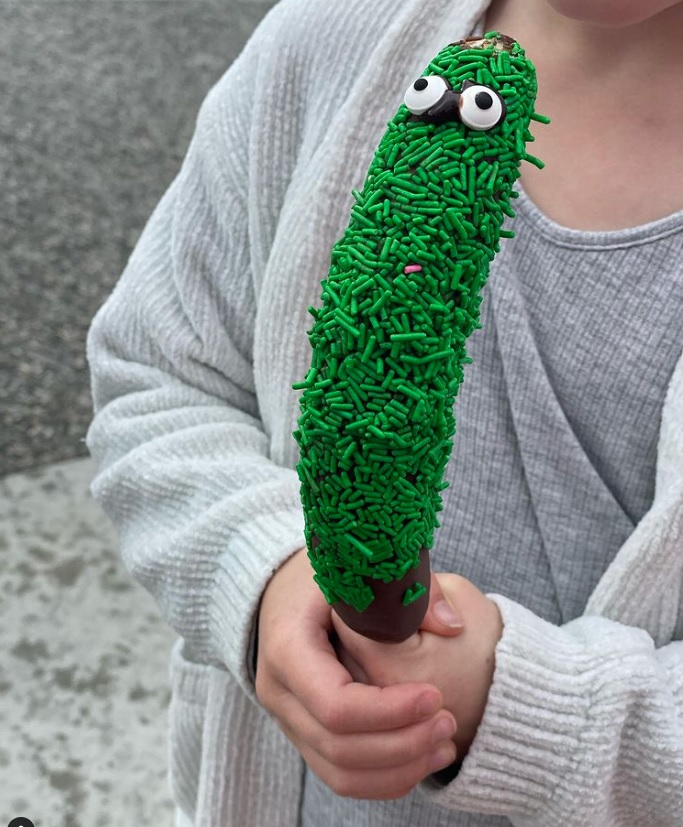 "His job brought us here," said Easton, "and we want to retire here. But I needed something to do, and this was within walking distance. And it's at the beach. What more could you want?"

Hours of operation are currently 12 to 8 pm every day of the week, though Andrews says that'll stretch to 9 or 10 pm as the summer comes on.

"If people are here, we'll be here too," she said, adding the concession will remain open through September and "possibly longer." 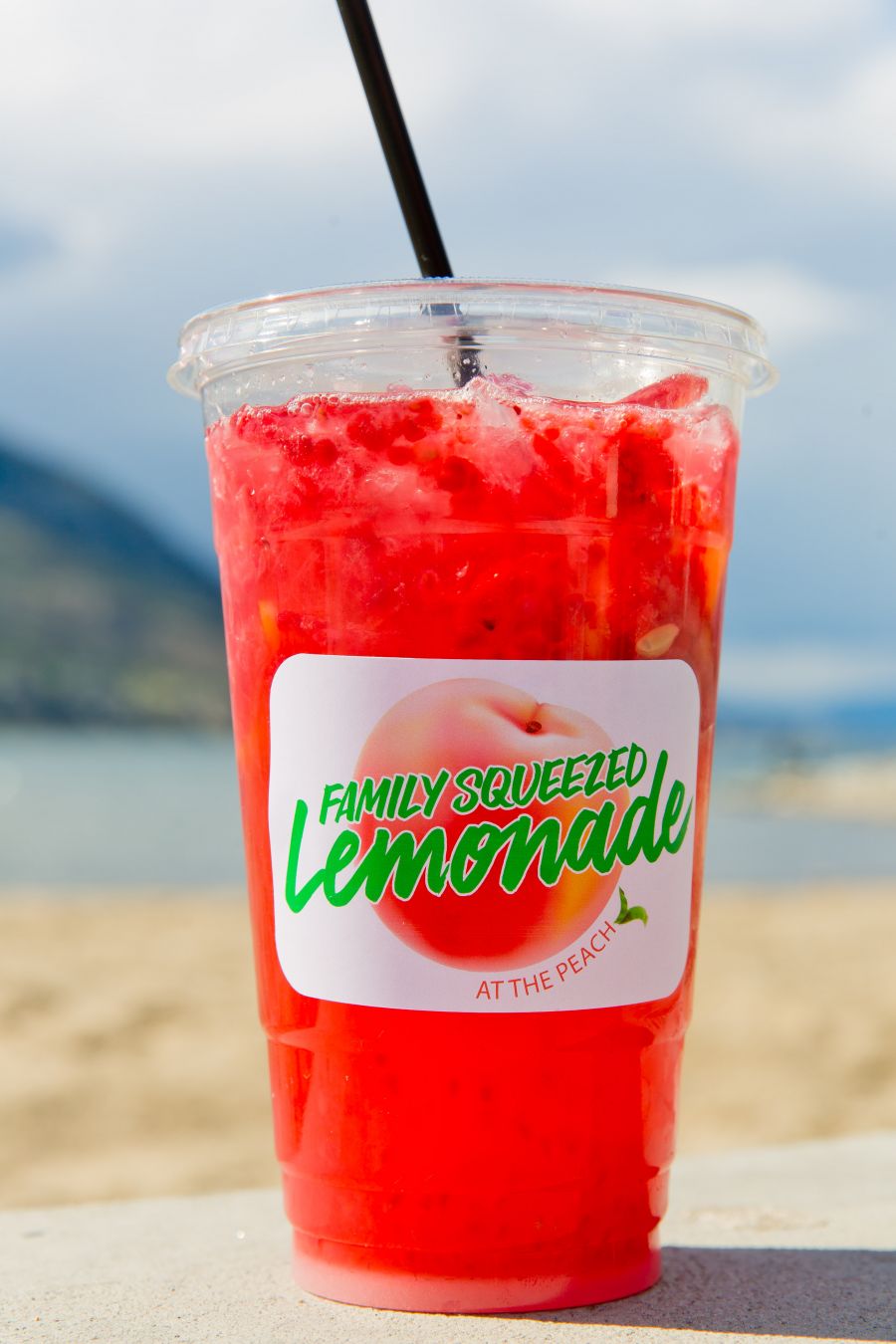 As for decorating the exterior, as became customary under the prior ownership, Andrews believes it's a feeling out process.

"We're just happy to be here. We're excited to share what Family Lemonade is with Penticton, and I think we'll make the Peach proud. 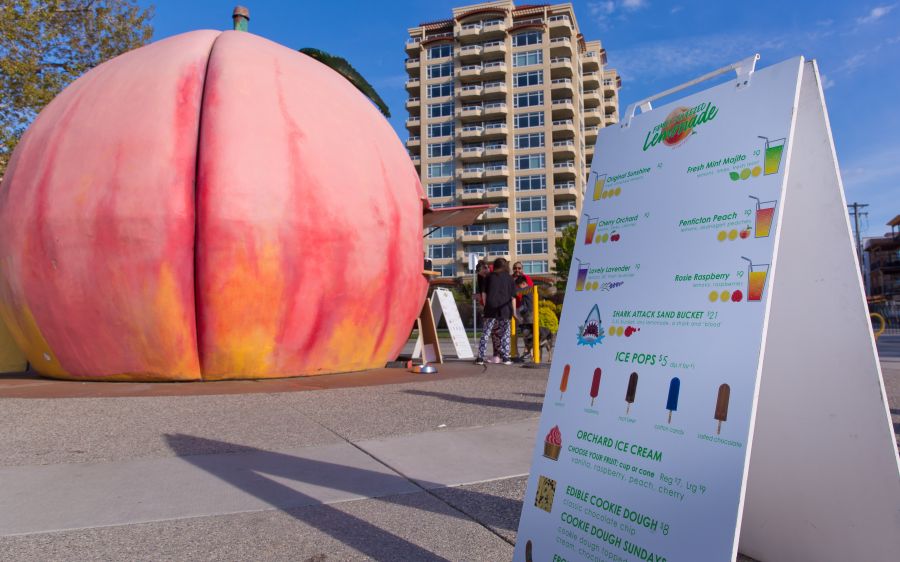