Denise Egan is an avid stand-up paddleboard (SUP) enthusiast, often sharing her adventures on the water through stunning photos on her Instagram.

Amidst the shots of the sparkling lake, sunsets and interactions with nature, you can sometimes spot a sight that will make you look twice.

About two years ago, a friend of Egan’s said her adorable pure-white cat Snoopy, was really more like a dog, suggesting that maybe she should see if he would tag along with her on peaceful SUP adventures.

At first Egan was apprehensive, saying she thought it was “weird” to bring a cat on a SUP board, but after realizing Snoopy did in fact have quite an adventurous side, she decided to give it a go. 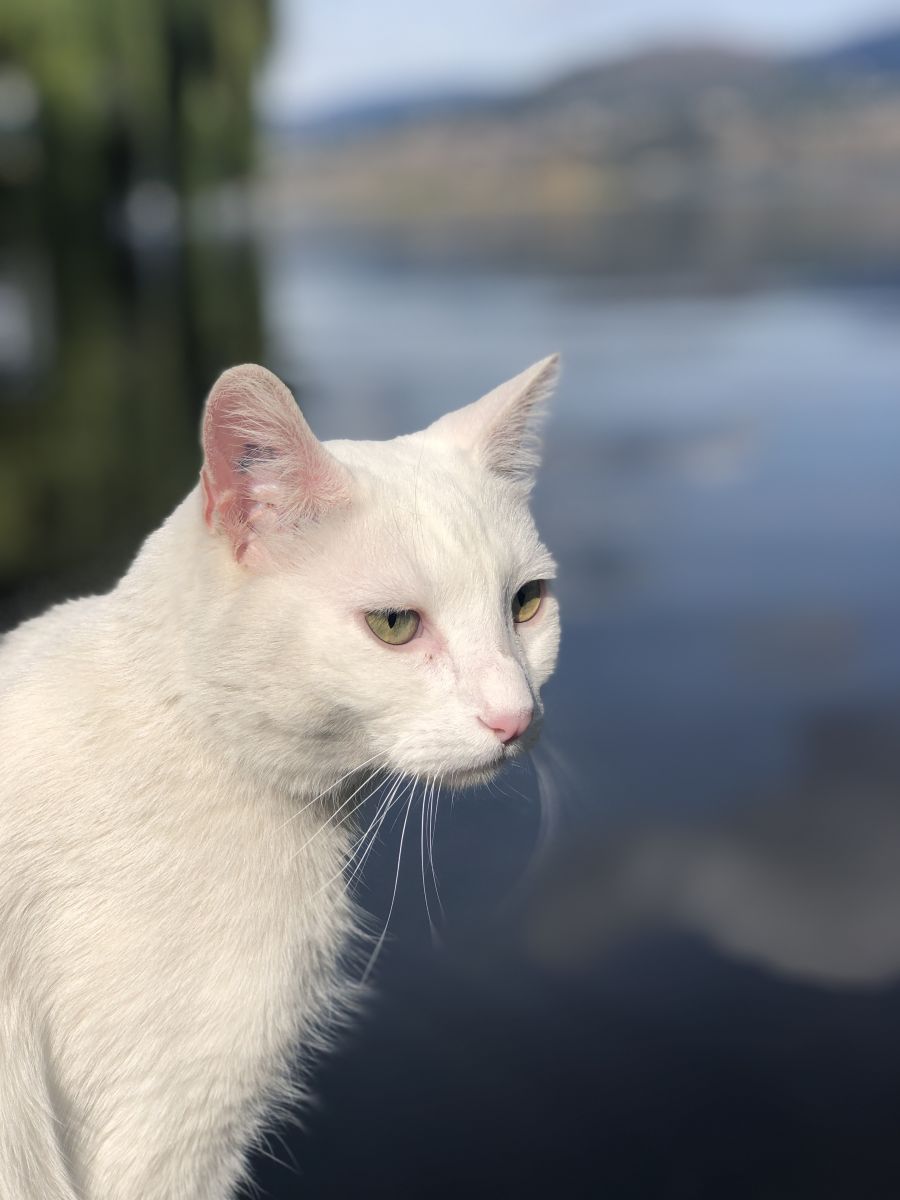 “One day I decided to try it out, so we went to Rotary Beach and Snoopy sat on the middle console of the car the whole ride there,” said Egan.

“When we got there he wandered around and did his own thing while I got stuff ready, and when I was ready to go he just followed me and hopped on the board right away — it was really weird,” she laughed. 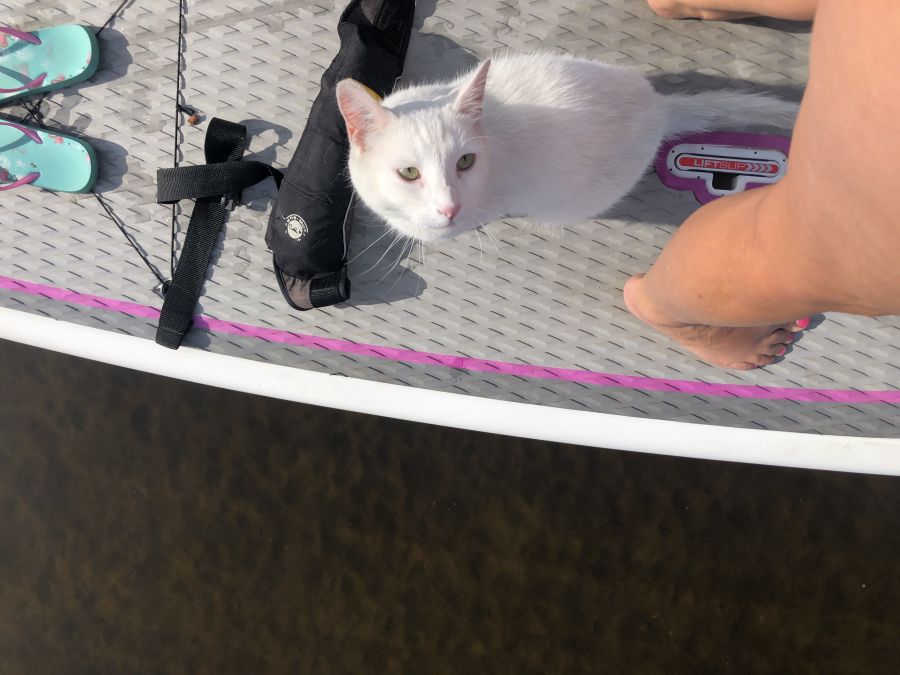 Since that day, the pair have become quite the explorers, often visiting the calm waters of Mission Creek.

“We have gone out quite a few times over the last two years,” said Egan. “He seems to find it peaceful, sitting on the end of my board looking out.” 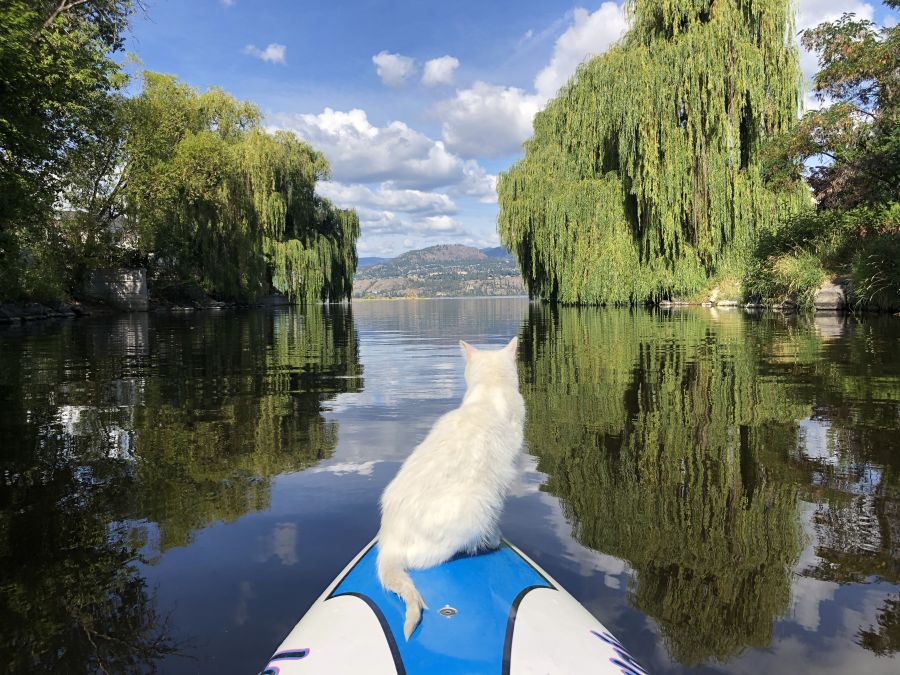 While it is known that most cats have a phobia of water, Snoopy doesn’t seem to mind it all that much.

“I think he would be mortified if he ended up in the water, but he won’t notice if his tail gets wet until I point it out,” explained Egan.

“He just cleans himself off right away and gets back to being comfortable — he really does seem to like it!” 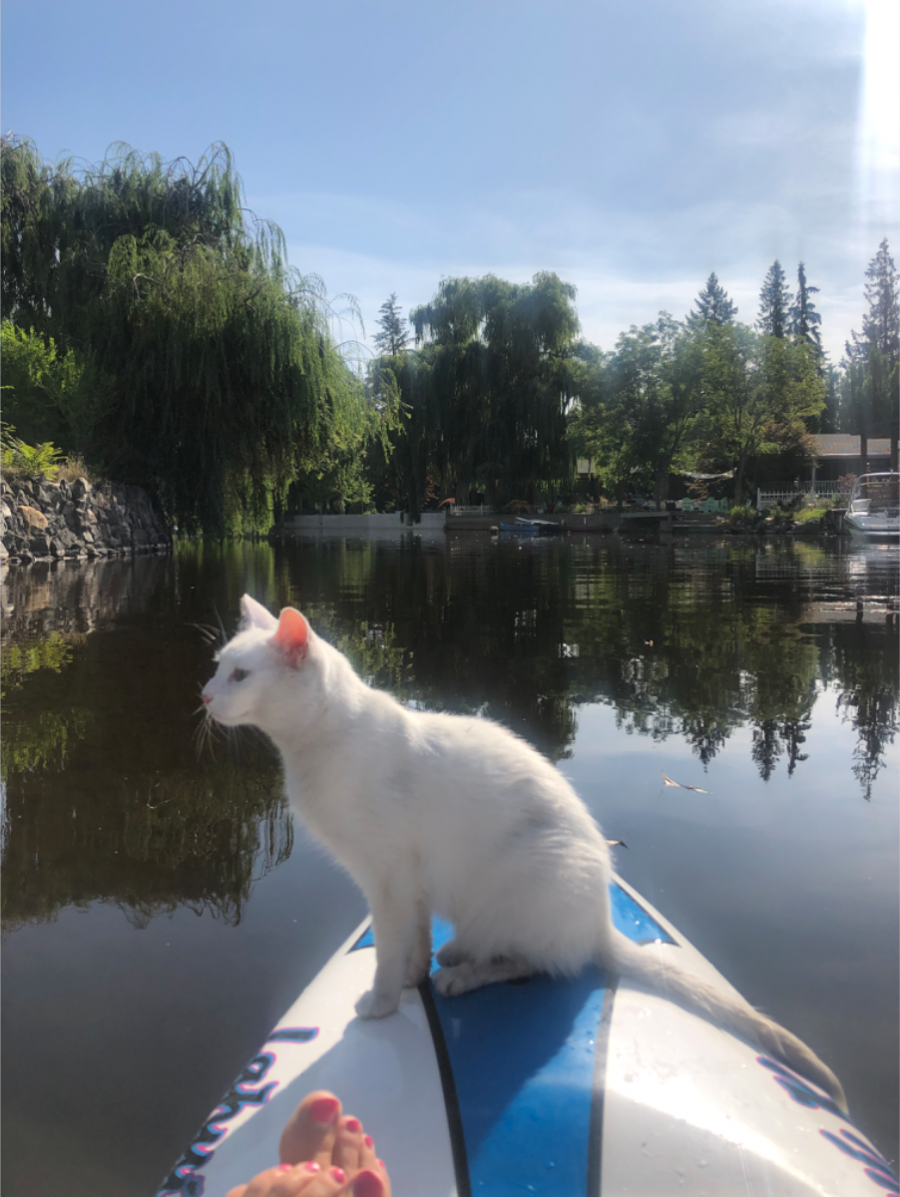 Understandably, the pair have gotten quite a few interesting looks and remarks from passersby.

“Voices carry across the water pretty easily so I often hear people say ‘Is that a cat?’ and it’s funny every time, they just seem to get so much enjoyment out of that moment of realizing there is a cat on a paddleboard,” said Egan. 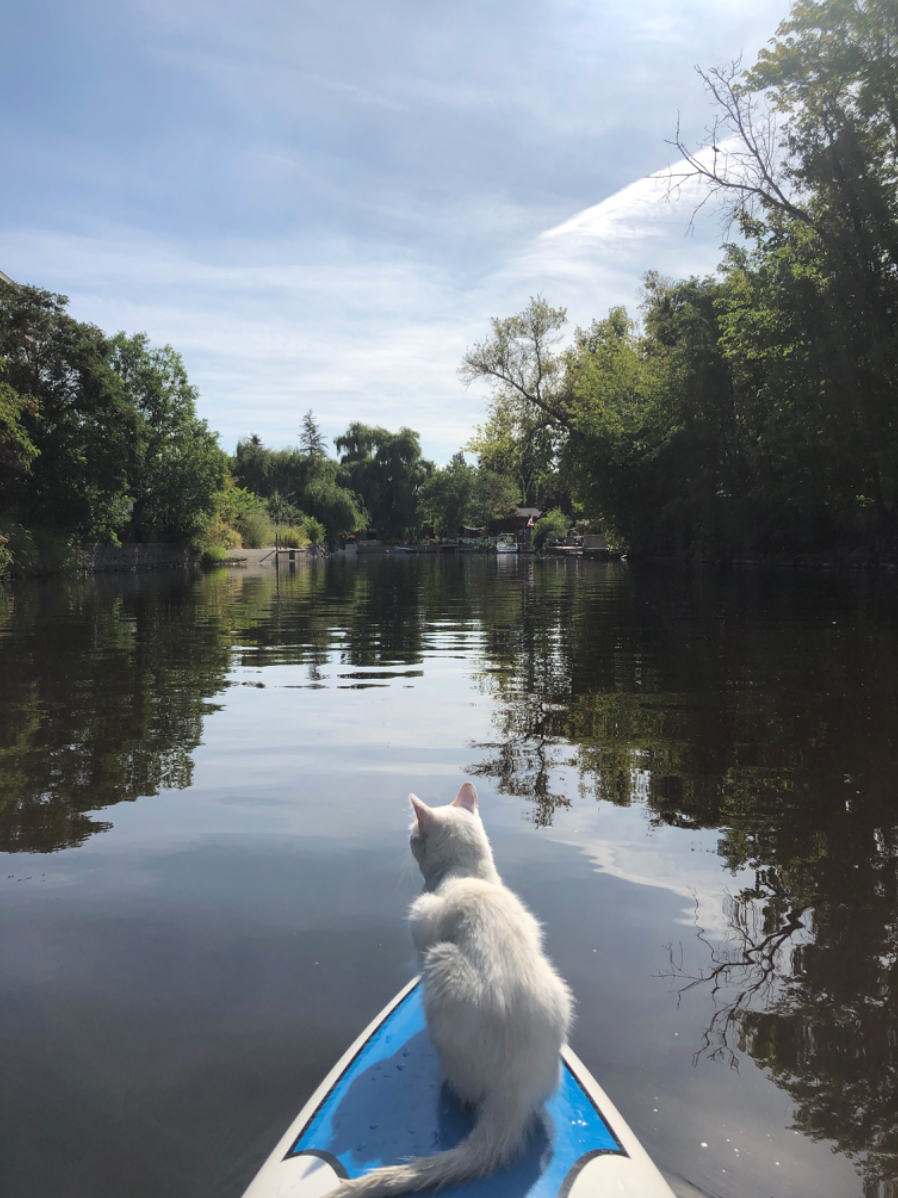 Over their many expeditions, the duo has shared some precious moments, from stumbling across a busy beaver in the creek to Snoopy claiming his post atop Egan’s shoulders for a better view.

While Snoopy does seem to love his time out on the lake, Egan is always mindful before taking him out, packing his life jacket, scouting the wave levels, the number of people in the area and the temperature. 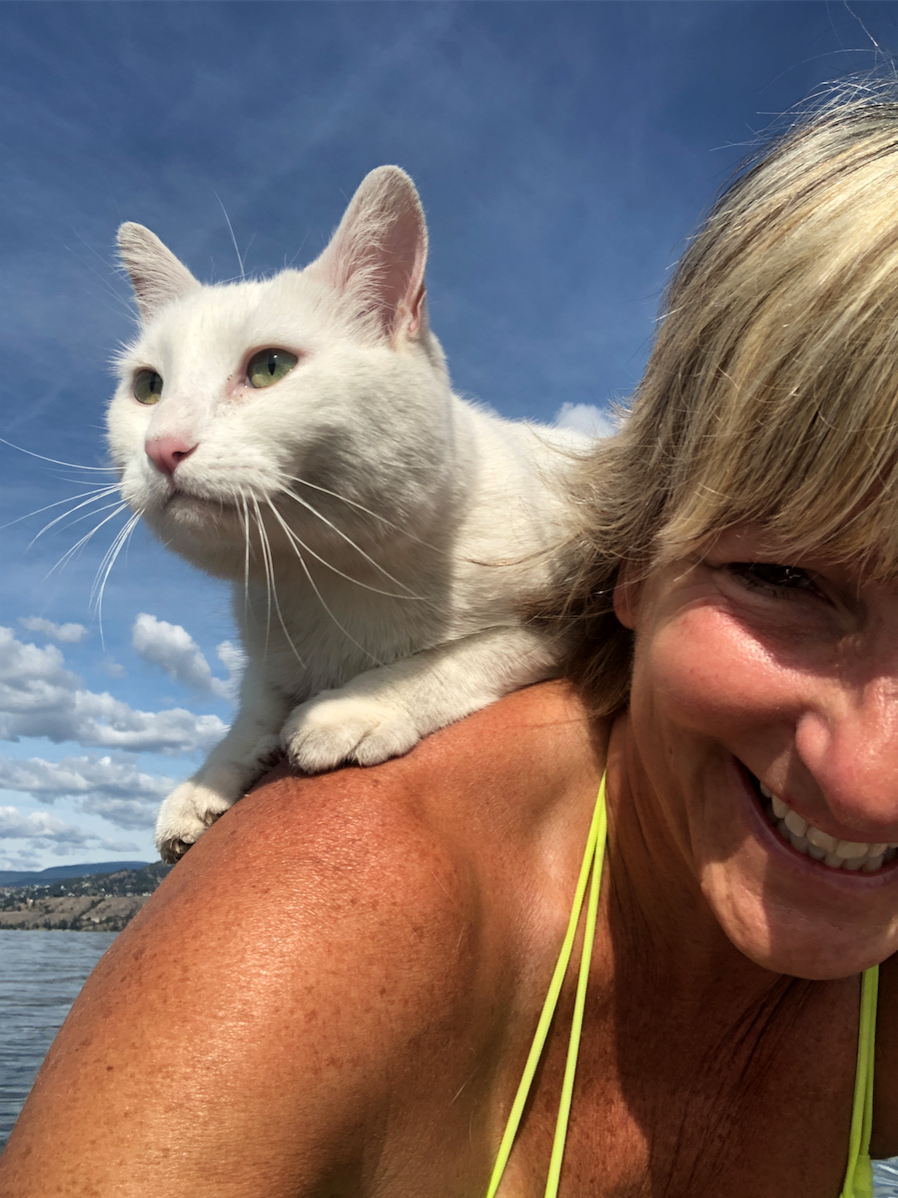 To keep up to date on the adventures of Snoopy and Egan, you can follow them on Instagram at @supokanagan and @snoopy_thecatdog.