Nova Scotia is now the second province in Canada to join B.C. in opening up the wine trade barriers, allowing the direct shipment of wine between wineries to consumers.

On Thursday, Minister of Agriculture Norm Letnick enjoyed the Okanagan sun at local vineyard Gray Monk, as he announced that Nova Scotia is now officially on board with Bill C-311. In other words, British Columbians can now have Nova Scotia wine directly shipped here and vice versa. 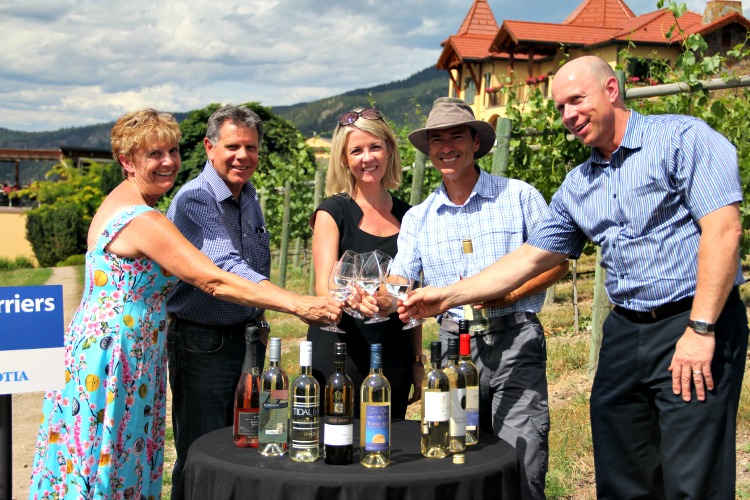 “British Columbia welcomes Nova Scotia in allowing direct shipments of B.C. wine from the producer to the consumer’s doorstep, and thanks to the government of Nova Scotia for its role in strengthening trade relationships between provinces, and allowing Canadians to share experiences and products from one coast to the other,” said Letnick.

Nova Scotia’s joining of Bill C-311 will contribute financially to Canada’s domestic trade and will also help to put Canada on the map as a blossoming and competitive wine industry.

“Opening the borders actually, I believe, will mean that more people will be buying more wine from across the country and it will build the industry throughout the country,” commented Letnick. “As you’re seeing today with Nova Scotia’s announcement, that’s one more province announcing to the world that we’re in the wine business and that they’re planning on growing the wine business. So watch out world, here comes Nova Scotia.”

Manitoba, Nova Scotia, and British Columbia are now the three provinces that have removed wine trade barriers. Bill C-311 was sponsored by Member of Parliament for Okanagan-Coquihalla Dan Albas and was passed on June 6th, 2012.

In the prohibition era, a law was passed that made illegal to bring a bottle of wine from one province to another. In light of moving with the times, Bill C-311 essentially counteracts the historic law; however, it's up to each province in Canada to negotiate terms of trade.