The Abacus Data poll shows that 81 per cent of those polled either support building BC Hydro’s Site C Clean Energy Project, or 59 per cent can support it under certain circumstances, while 17 per cent are opposed. The poll also found that province-wide awareness of the dam has increased significantly, with 75 per cent of British Columbians saying they are aware of the project, compared to just 41 per cent in 2013. 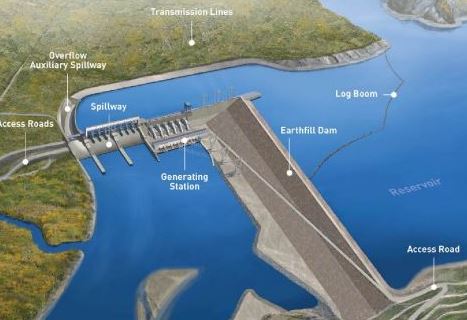 Artist rendering of the project (Photo Credit: BC Hydro)

The hydroelectric dam and generating station on the Peace River is also receiving strong public support in the north/northeast region of the province. Of those surveyed, 73 per cent support the building of the dam, and 51 per cent can accept it under certain circumstances, while 26 per cent are opposed. Regional awareness of Site C has remained very high. The poll found that 90 per cent of those polled in the north/northeast are aware of Site C, up from 78 per cent in 2013.

The province-wide telephone poll of 1,038 people took place from June 10th to 19th. The margin of error for the study in the province wide sample is 3.1 per cent, 19 times out of 20. A regional sample of 303 people from the north/northeast was included in the survey.